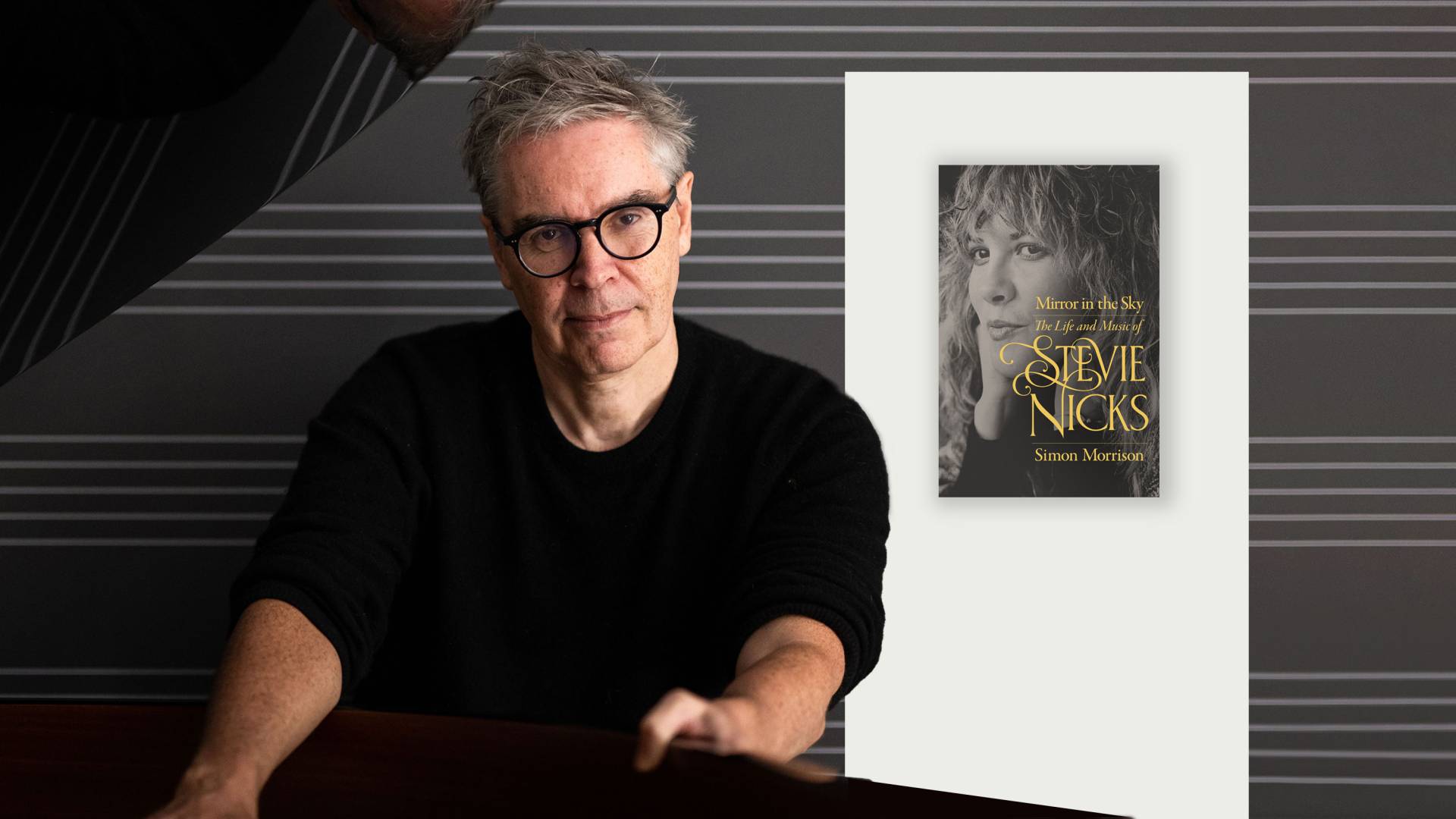 When Stephanie Lynn Nicks was a toddler, she couldn’t pronounce her name, calling herself “TeeDee,” which became Stevie. It stuck. And that’s how the world still knows her, ever since she burst onto the pop music scene in the 1970s as lead vocalist for Fleetwood Mac.

“She became a superstar in the year of Star Wars, the Concorde, Elvis’ death, New York’s blackout, Jimmy Carter’s inauguration and FM music that imagined utopia in the midst of stagflation,” writes Simon Morrison in his new musical biography “Mirror in the Sky: The Life and Music of Stevie Nicks” (University of California Press), drawn from existing oral histories with Nicks, dozens of exclusive interviews with musicians and producers who worked with her, and Morrison’s archival discoveries.

Fleetwood Mac’s “Rumours” — which has sold over 40 million copies worldwide, making it one of the best-selling albums of all time, and is the ninth bestselling album of 2022 so far — “still sells because people are still trying to imagine 1977 as it never was. Nicks scratched its depth — through the grain of her voice — into a gleaming surface.”

Simon Morrison, a 1997 graduate alumnus, professor of music and Slavic languages and literatures and director of the Fund for Canadian Studies, has spent his entire career at Princeton. He received the University’s Howard T. Behrman Award for Distinguished Achievement in the Humanities in May. An archival historian specializing in 20th-century Russian and Soviet music, he is also a sought-after lecturer and speaker in the public humanities and is often interviewed in the national and international media — including most recently about the impact of the Russian invasion of Ukraine on the arts.

So why might Morrison, who has written prolifically on Prokofiev and the Bolshoi, and is currently working on three books — on Tchaikovsky, Shostakovich and the history of Moscow — want to write about Stevie Nicks? His favorite album in high school was Fleetwood Mac’s “Tusk,” which he listened to on repeat. About six years ago, Morrison found himself in a conversation about American pop music with the University of California Press (which published his book “Russian Opera and the Symbolist Movement”); the discussion wound its way into the ineffable allure of the song “Dreams” and Nicks’ innate gift for songwriting. And the idea for “Mirror in the Sky” began to emerge.

The book is being published today. Nicks, 74, is currently on tour through Oct. 31.

Morrison will appear at 6 p.m., Nov. 10, at Labyrinth Books in Princeton, in conversation with rock historian and author Pamela Des Barres. This event is part of Labyrinth’s and the Princeton Public Library’s joint programming and is cosponsored by Princeton’s Humanities Council. 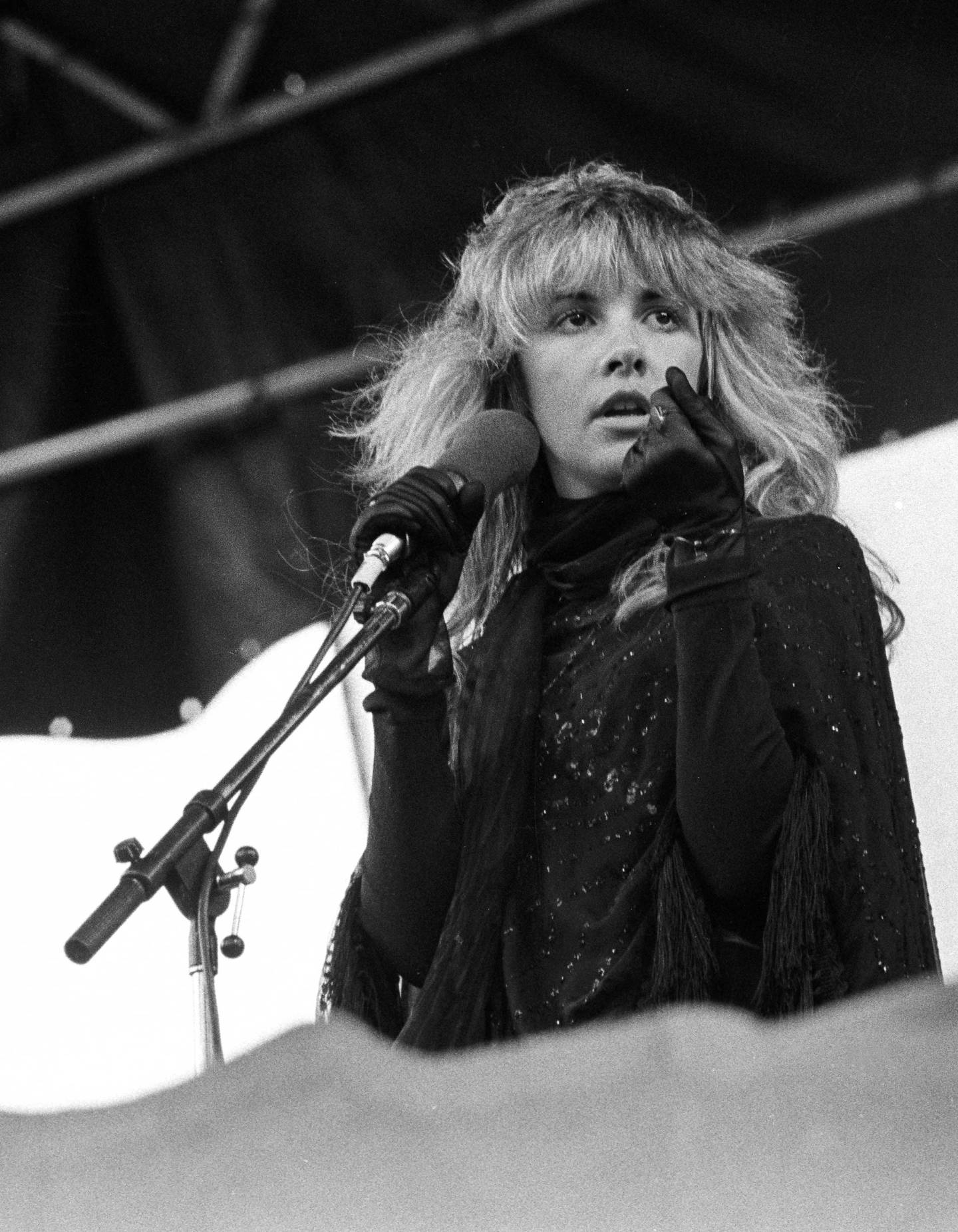 Photo by Richard McCaffrey. Reprinted from "Mirror in the Sky," courtesy of the photographer and the University of California Press.

Here, Morrison reflects on the ingredients of Nicks’ iconic appeal, her intentional focus on feelings in her lyrics and her persistence to be heard in male-dominated world.

In his 2020 viral TikTok video, Nathan Apodaca nailed the chill vibe we all needed at that moment in the pandemic: He’s swigging cranberry juice while skateboarding and lip-syncing to the 1977 Fleetwood Mac hit “Dreams,” which Nicks wrote. The video catapulted the song back onto the charts and prompted Nicks herself to join TikTok so she could do her own version. What’s your take on the extraordinary staying power of Nicks’ songs? How do they speak to younger generations decades after their release?

That fabulous “Dreams” meme proved a point about the sound that Fleetwood Mac perfected in 1977, what’s been called “the crystal palace of soft rock.” The song has a chill-out SoCal escapism that still appeals. Much of TikTok is about vibes, I’m told, and so it made a lot of sense that “Dreams,” a song recorded in snippets, over and over and over again, to capture a certain mood and feel, ended up in that perfect clip of Apodaca gliding to work drinking Ocean Spray. (Nicks, I should note, called him up to thank him for pushing “Dreams” back up the charts.) Recording that song was torture and the circumstances behind it anguished and yet it sounds completely unbothered and effortless.

Nicks’ continued presence in the lives of younger, mostly female listeners is testament to the power of music fashioned on a loom — cut fine, then textured and softly woven, like Taylor Swift’s “Cardigan.” I mention Swift because she’s a devotee of Nicks.

Throughout the book, you capture signature “Stevie moments.” In one, she performs “Angel” before a sold-out crowd on the “Tusk” tour at the Checkerdome in St. Louis on Nov. 5, 1979. Can you describe how she seizes this moment and how it’s emblematic of her onstage persona — a kind of alchemy that stoked the adoration of her millions of fans?

I love everything about that performance. There’s nothing to the song besides a few notes and a few chords and a steady whomp whomp. Nicks has little to work with but she makes it everything. It’s euphoric, a five-minute high. Before the final shoutout (of the extremely enigmatic words “track a ghost through the fog”), she treats the audience to something completely unexpected: buck-and-wing dancing, blending steps from the Mashed Potato and the Charleston, channeling the Follies. A real show.

There’s Nicks in the moment in a St. Louis arena, and there’s Nicks in the Roaring Twenties performing in a dance hall somewhere. That’s the magic: the possibilities of form and meaning and purpose that she puts into it. Those steps are hard to pull off in her platform heels, but she delivers, pumping her fist, immersed in the power of her presence. Music like this exists only in performance, but the performer has to be electric, and there’s been few as electric as her over the years.

The book’s title “Mirror in the Sky” is a line from the mega-hit “Landslide,” which you call “a truly brilliant song.” You write that Nicks penned it while holed up alone in a friend’s home in Aspen — the snow and slopes forming metaphors about mortality, regret and the nature of love. What was going on in Nicks’ life at that time and how does the song’s lyrics illuminate her ability to embrace feelings, which you explain are paramount to her extraordinary success as a songwriter?

It’s a song about mortality written by someone in her 20s. She and her boyfriend (Lindsey Buckingham) had driven from Los Angeles to Aspen before he went on tour with the Everly Brothers. That tour was a miserable experience and a financial bust and caused a big fight between them when he returned. Meantime, stuck alone in a lodge owned by a friend of the band, she ruminated about life and love and what she imagined to be the end of her career in music, rather than the beginning. Her grandfather had died in August, her father had been diagnosed with heart disease, and he and her mother were hinting that life with Buckingham, and a life in music, might not have been the best choice. “Landslide” is about all of these things, and she wrote it just before her parents sent her a plane ticket back home.

Throughout the book, I write about Nicks’ music coming from a place that is much bigger on the inside than the outside, where feelings are more significant than thoughts or actions. 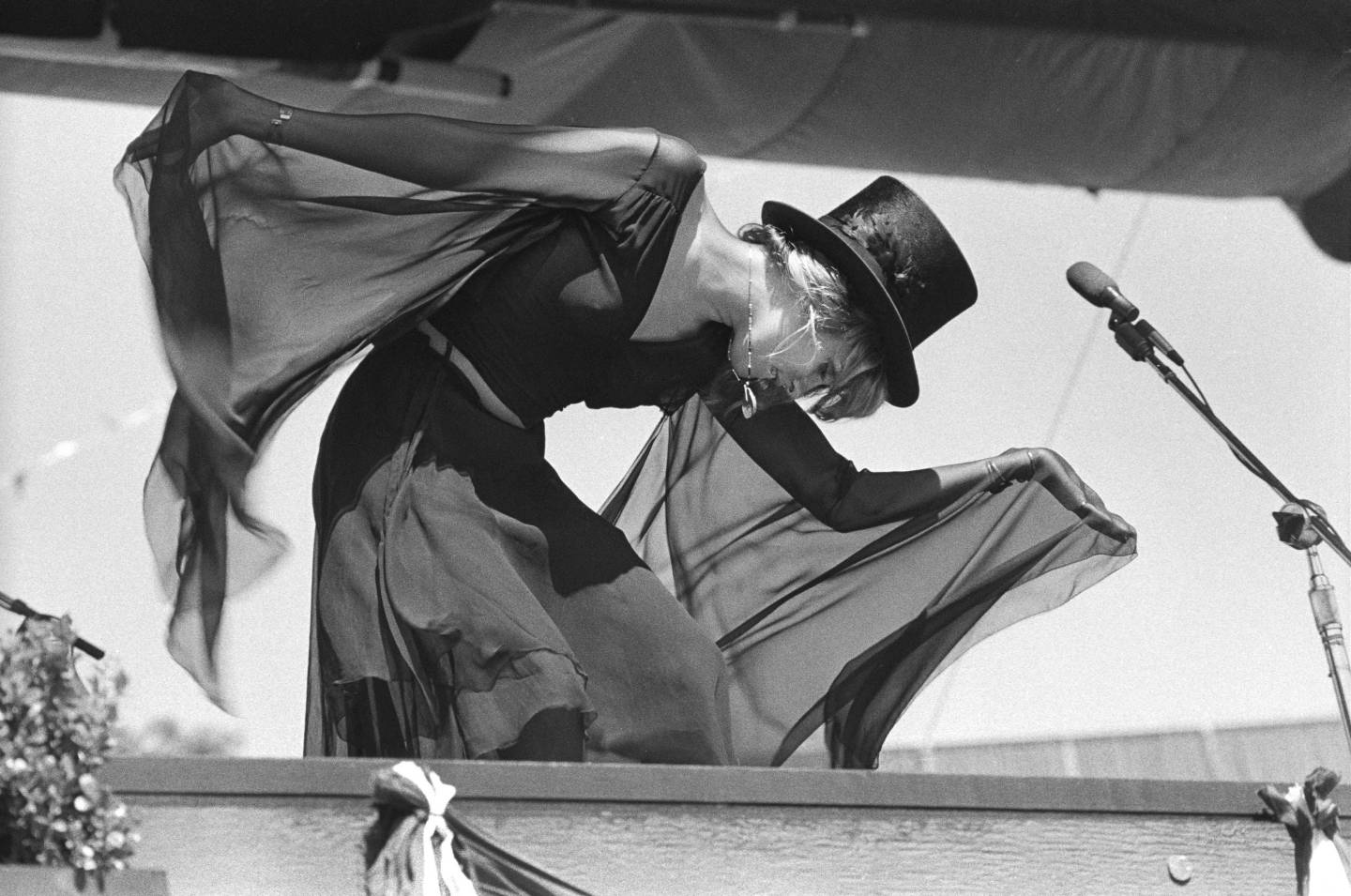 Day on the Green.

Photo by Richard McCaffrey. Reprinted from "Mirror in the Sky," courtesy of the photographer and the University of California Press.

During a lecture you gave for Roundtable by the 92nd St. Y, you played a video clip of Nicks trying to make a point during a Fleetwood Mac recording session. Mid-sentence, she’s waved off by the men in the studio, who talk right over her. You told the audience one of the reasons you wrote the book was to shed light on the misogynistic record industry harassment Nicks put up with — and defeated — in her rise. What do you hope readers take away about the way she learned to step into her own authority — with Fleetwood Mac and in her still-vibrant solo career?

One of the advance reviewers of the book pointed out that Stevie Nicks had to be better than the men around her, which is something I certainly wanted to demonstrate. She might not have had all the technical knowledge or even obsessive working habits of her one-time creative/romantic partner Lindsey Buckingham, I argue, but she had an innate gift for songwriting that generated hit after hit. I write about subtle and unsubtle forms of censorship and repression she faced and describe great songs like “Planets of the Universe” and “Joan of Arc” that the men turning the dials in the studio and managing the record labels deemed weak and unusable or made them uncomfortable. There’s a regrettable pattern here about women’s creative energies being dismissed except when they inspire men.

Some of the neglected music turned up on later albums; some of it has never been recorded. Nicks’ aesthetic was not always respected in the 1970s and ’80s, nor, frankly, have the fans who made her music their own. That respect has come more recently, hence her double induction into the Rock & Roll Hall of Fame. Nicks is now as iconic than the heroines of historical legend, Hollywood film and gothic literature whose imaginings she channels.

Your work is always deeply rooted in archival research. Would you share how some of your archival discoveries shaped the book?

I was amazed at the diversity of literary references in her output, and the depth and richness of her interpretations of figures like “Alice in Wonderland,” “Joan of Arc” and her onstage alter ego, “Rhiannon.” The book focuses on how she wrote her music, how it was recorded and performed, but I also ended up writing her biography. That was not my intention, but I wanted to correct the record and fill in some gaps.

Besides the interviews I conducted and the insights they provided, I’m most proud of the pages I wrote about Nicks’ musical upbringing. She drew a lot of inspiration from her grandfather A.J., a country singer who never quite made it, who came and went as she was growing up. She sang old time duets with him in a tavern that her father owned and her mother catered. Nicks didn’t remember the name or location of that tavern, even the city it was in, but I found it. It’s outside of Los Angeles in Altadena. My daughter took the picture of it that’s in the book.