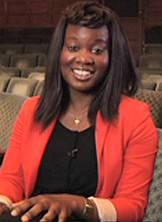 Music major Tanyaradzwa Ashleigh Tawengwa, a 2012 recipient of an Alex Adam '07 Award from Princeton's Lewis Center for the Arts, spent last summer in her native Zimbabwe studying ethnomusicology and recording a CD, which hit the pop charts in the capital city of Harare. She has embraced numerous performance opportunities at Princeton — and found her own voice.

Music major Tanyaradzwa Ashleigh Tawengwa, a 2012 recipient of an Alex Adam '07 Award from Princeton's Lewis Center for the Arts, spent last summer in her native Zimbabwe studying ethnomusicology and recording a CD, which hit the pop charts in the capital city of Harare. She has embraced numerous performance opportunities at Princeton — and found her own voice.

Watch Tawengwa perform "With You" from her first CD in Princeton's Richardson Auditorium.

Watch Tawengwa perform "With You" from her first CD in Princeton's Richardson Auditorium.

When Princeton undergraduate Tanyaradzwa Ashleigh Tawengwa — Tanya to family and friends — was a toddler growing up in Harare, the capital of Zimbabwe, her mother played Whitney Houston tapes in the car. Tawengwa would sit in the back seat, humming along, memorizing every song.

When she was 3, she sang her first solo in church: Houston's "Who Would Imagine a King?" from the film "The Preacher's Wife." "That's when people realized that I had some form of musical inclination," Tawengwa said.

Play the "Songs from the Heart" video.

Nearly two decades later, Tawengwa is pursuing her dream of becoming, in her own words, "a superstar." This video chronicles how she has embraced numerous performance opportunities at Princeton — and found her own voice.

Tawengwa, a 2012 recipient of an Alex Adam '07 Award from Princeton's Lewis Center for the Arts, spent last summer studying ethnomusicology; the mbira, the national instrument of Zimbabwe — a kind of finger piano made from a large gourd; and folk guitar at the Zimbabwe College of Music. She is using this musical training to compose an opera, "The Dawn of the Rooster," based on the music of the Zimbabwe liberation struggle, for her senior thesis.

She also recorded a CD of original songs in both English and Shona, her native language, at a studio in Harare; the recording engineer was Clive "Mono" Mukundu, a well-known musician in Zimbabwe. After dropping off her eponymous CD, "Tanyaradzwa," at radio stations on a whim, Tawengwa returned to Princeton to begin her junior year — and soon learned her CD had hit the pop charts at home. Reporters and radio deejays began calling from Zimbabwe.

The Alex Adam '07 Award, which annually supports three undergraduates over the summer to create a work of art, was named for Alexander Jay Adam, a former Princeton student who was active in the campus theater community and died in 2007.

Tawengwa said that winning the award was a "tipping point" in the many ways Princeton has enabled her to explore her love of music. "To know that an institution like Princeton could invest so much in someone who just wants to sing helped me know I could realize my dream of becoming a performer," she said.

As a child, Tawengwa studied science and at first wanted to become a doctor. "People close to me said, 'Why would you want to study music? It's a waste of time.' I came to Princeton knowing that I wanted to be a music major but was never OK in saying that all I want to do the rest of my life is perform," she said. In addition to her major, she is pursuing certificates in vocal performance, theater, French and African studies.

Being at Princeton built her confidence, Tawengwa said. "People who I looked up to, people I really respected, made the proclamation for me and helped me make it for myself. My voice trainer David Kellett said, 'You could be this if you want to.' That encouragement played in my head like a record. With Gabriel Crouch [director of the Glee Club], same thing. He said, 'You want to sing forever? You can do it!' It was as if he read my mind."

Tawengwa began writing songs at Princeton. "Writing for me has been part of my development, getting to know myself better; it's a voice I never knew I had. When I write, I feel connected to my source, God. I know this is what I am supposed to be doing," she said.

One song on the CD was inspired by the death of her brother, Itayi Tawengwa, in March 2012. "With grief, you don't know how to express it," Tawengwa said. "That song was borne out of a certain amount of frustration of the world continuing but my world having been stopped in that moment," she said. Click here to see a performance of "With You."

The song's message is for "people to feel encouraged and liberated to be the people they were created to be," Tawengwa said. "One thing I've definitely learned at Princeton is that it's OK to be you."

Tawengwa, the youngest of seven, comes from a musical family. She began to study piano at age 10, cello at 13, and recently added guitar. Her childhood was filled with song, in church and on the family farm her grandfather built outside of the city.

Tawengwa arrived at Princeton as a Davis UWC Scholar, having studied for two years at the Armand Hammer United World College of the American West in Montezuma, N.M. As a high school student, she had her first taste of stardom when she was cast in a touring production of American activist and playwright Eve Ensler's "Emotional Creature," a series of monologues about and for girls. She performed with Ensler at a luncheon in Beverly Hills attended by Jane Fonda, Charlize Theron, Rosario Dawson and other celebrities.

After her freshman year at Princeton, she toured with "Emotional Creature" in South Africa over the summer. She continues to work as an action team leader with V-Girls, an organization Ensler founded to help empower girls around the world, performing in V-Girls music videos and at TedX Women in Washington, D.C., and the Hammerstein Ballroom in New York City.

In addition to social issues, Tawengwa said faith has played an important role in her life. When she found herself waitlisted at all seven schools she had applied to, including Princeton, she said she was in despair. "I called my mom, sobbing. She said, 'Tanya, faith is a big part of who you are. So take a moment and ask yourself, what is it that you used to do for God that you don't do anymore?'"

Tawengwa realized that while she had attended a Methodist church in Montezuma sporadically, she had not taken part in the worship services. One Sunday morning in May the minister called and asked if she would sing a solo before the congregation that day. She sang "My Redeemer Lives" by Nicole Mullen, "the last song I sang before I left Zimbabwe," she said.

The next morning Tawengwa got a call from Princeton offering her a place in the Class of 2014 and a financial aid package. "I was laughing and crying, everything in one moment," she said.

This past winter break, she flew home for the holidays and a round of media interviews. On Dec. 31 — her 21st birthday — Tawengwa had a CD launch party at a popular café in Harare, attended by family, friends, reporters and fans. "That day I really felt like a superstar," she said.

Tawengwa plans to go to conservatory after graduating. She has not forgotten the self-doubt she had in school and has these words of advice for students who may feel they could never go to Princeton. "You can do anything you want to do. You can be exactly who you want to be. You can push, you can work hard and you can make it. Even when things get hard at Princeton, this is where I'm supposed to be," she said.