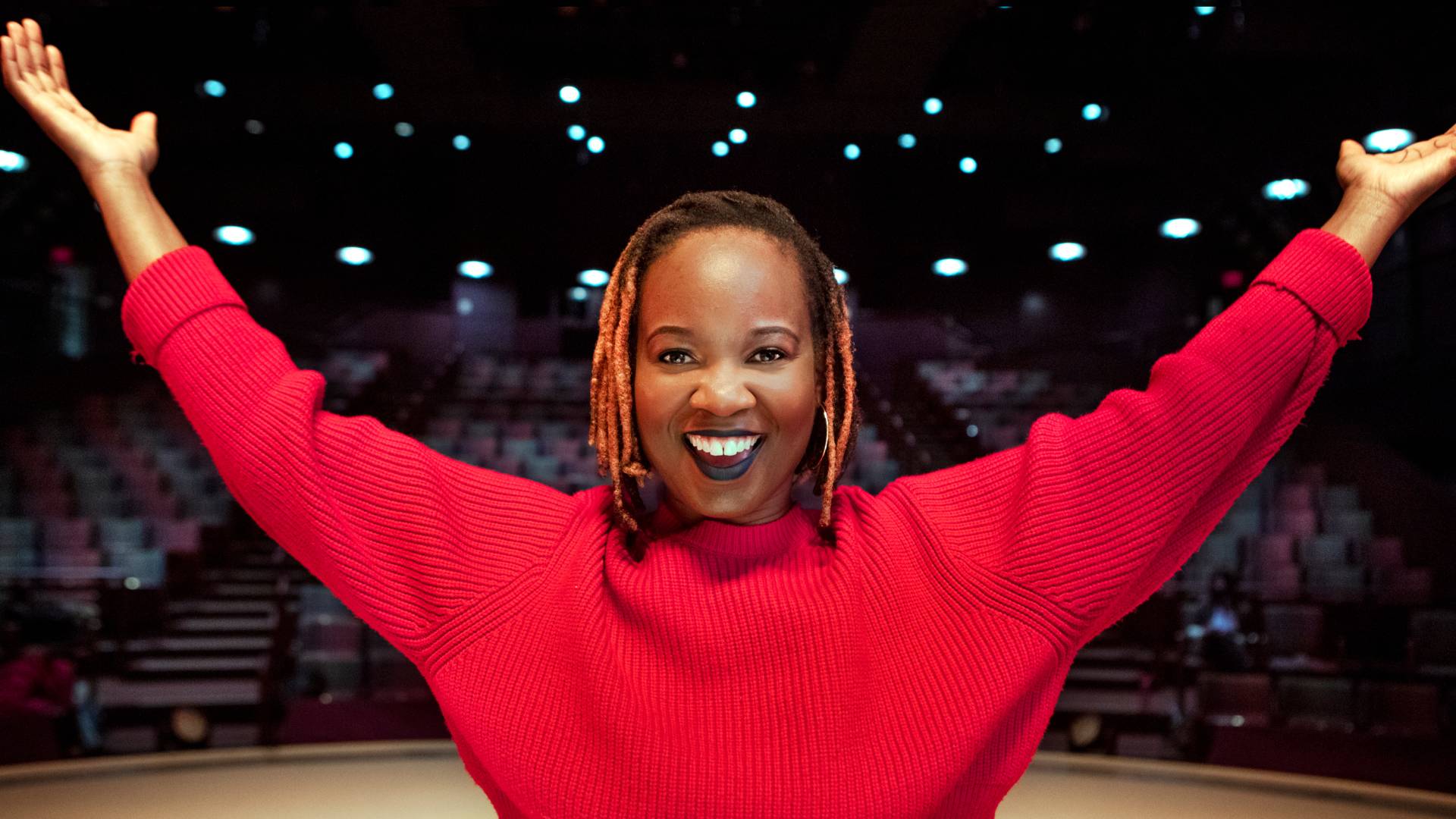 Tanyaradzwa Tawengwa, a 2014 alumna and Hodder Fellow at the Lewis Center for the Arts, pictured here on the stage at McCarter Theatre Center's Berlind Theatre, reflects on the return to live performance, creating new work at Princeton and using her craft to restore Indigenous Zimbabwean cultural knowledge to future generations.

In 2012, when Tanyaradzwa Tawengwa was a sophomore at Princeton, she attended a performance at McCarter Theater Center of “The Convert.” A native of Zimbabwe, she was excited to see this new work by Zimbabwean playwright Danai Gurira, premiering while Gurira was a Hodder Fellow at Princeton’s Lewis Center for the Arts. As Tawengwa, a budding composer and vocalist, watched the performance, she made a wish that one day she would have her own debut on the McCarter stage.

Ten years later, Tawengwa got her wish — in an unexpected way. After graduating from Princeton in 2014, with a concentration in music performance and certificates in voice performance and French, she earned her doctorate from the University of Kentucky. When McCarter made plans to stage the musical “Dreaming Zenzile” in its 2021-22 theater season, Tawengwa was invited to understudy the female roles in the four-person ensemble, a natural choice since Tawengwa had been a part of the original production at The Repertory Theatre of St. Louis in 2019. When one of the actors at McCarter was injured just days after the opening, Tawengwa stepped into her role as part of the Sangoma Chorus on Jan. 27 — fulfilling her dream. She is also a Hodder Fellow at the Lewis Center this academic year.

“Dreaming Zenzile,” based on the life of legendary South African singer and activist Miriam Makeba, takes place at Makeba’s final concert in Castel Voltumo, Italy, on Nov. 9, 2008. As she wows the crowd with her extraordinary repertoire ranging from traditional South African songs to American jazz standards, her ancestors are calling — transporting her, through music and memory of her past, on a spiritual journey of reconciliation.

Below, Tawengwa reflects on the return to live performance, creating new work at Princeton and using her craft to restore Indigenous cultural knowledge to future generations. 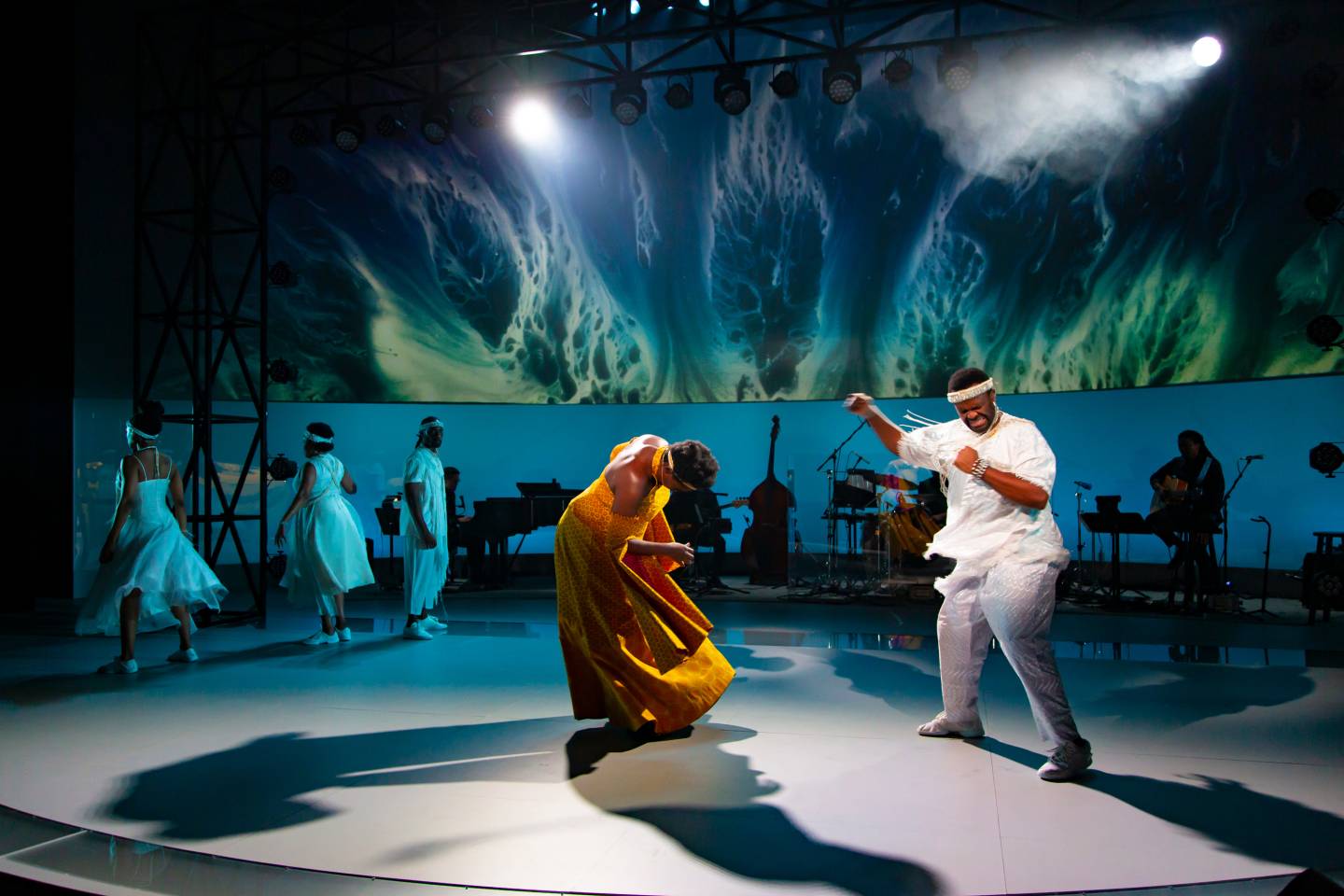 “Dreaming Zenzile,” based on the life of South African singer and activist Miriam Makeba, takes place at Makeba’s final concert. As she wows the crowd, her ancestors are calling — transporting her, through music and memory of her past, on a spiritual journey of reconciliation.

How is the unexpected opportunity to take the stage in this show, and in Princeton, especially meaningful for you?

My journey with “Dreaming Zenzile” began in the first presentation of the work at The Repertory Theatre of St. Louis. I played the Sangoma Chorus role of Bongi, and I was also dance captain. Sadly, the production was halted in Jan. 2020 — just a week before opening — due to COVID. When the show returned in August 2021, I was offered my role but I had to travel back to Zimbabwe for personal reasons and missed the show.

But that same month, I was named a Hodder Fellow with the Lewis Center for the Arts so I knew I would be coming back to Princeton. When the invitation to be a part of “Dreaming Zenzile” at McCarter came in November, it was a full-circle moment. This opportunity is the manifestation of the desire I expressed as a sophomore, wanting to perform at McCarter one day. It is incredibly meaningful to be onstage every night and think that there was once a time I was sitting in the audience of the very same theater, wishing to be on stage.

The show brings to life Makeba’s journey from South Africa to the United States and how that opened a new world for her as an artist. How does her journey resonate with your own experience of leaving Zimbabwe and the discoveries you made at Princeton?

Miriam Makeba led a life of purpose. She left her home and was exiled for most of her life because she spoke the truth. Her journey resonates with me on various levels. I left Zimbabwe at a time of economic collapse. Princeton was a great place to find a sense of home, but I did feel like an exile at times. I left home because I had to and because I wanted to. The feelings are complex.

I also feel that I am here leading a life of purpose. I am committed to telling the truth through my scholarship, creativity and leadership.

In 2020 I wrote an article titled “Cultural Vampires: White Exploitation of Zimbabwean Mbira Music.” It describes the ways our Indigenous Zimbabwean cultures have been under attack for the last 600 years from European colonial forces and Christian missionary proselytism and how our culture-bearers are being exploited. This systemic theft has caused a knowledge gap that has affected generations of Zimbabweans.

Academic institutions have an essential role to play in the righting of Indigenous knowledge theft. As a Hodder Fellow, I am shedding light on this path by adapting “Cultural Vampires” into an auto-theoretical piece in a comic book format. I am also composing “Mudzimu Dzoka,” a biomythographical performance piece detailing my re-embodiment of Zimbabwean ancestral practices as a panacea for colonial disembodiment.

Access and knowledge of your cultural heritage is a human right. I hope to ensure that present and future generations of Zimbabweans will know and enjoy the wealth of our Indigenous knowledge.

What does Makeba’s story about transcending struggle and loss and embracing joy and hope tell us about what’s important in this moment?

Miriam Makeba’s story resonates deeply during this pandemic where there has been so much loss globally. Frankly, I am grateful for every day I wake up healthy and hear that all my loved ones are healthy. Gratitude for the presence of love, goodness, justice, health and community is what I am holding as a gift at this moment.

In the show, Makeba says, “The spirits of our ancestors are ever present.” How is your own craft grounded by the ancestors in your family?

My ancestors guide everything I am and do. In our Chivanhu Indigenous belief, ancestors petition on our behalf to Musikavanhu — the Creator — so that all may be well with us. My grandmother was a Svikiro — a spirit medium, and my great-grandmother was a N’anga — a healer. All this energy lives in my bloodline, and I channel this ancestral, spiritual power into my craft daily.

More about Tawengwa and ‘Dreaming Zenzile’

Tawengwa is also the founder/music director of the pan-African ensemble the Mushandirapamwe Singers and founder/CEO of Zimbabwe KIDS camp, dedicated to enshrining Madzimbabwe Indigenous cultural knowledge through creative arts education. Watch a video feature about Tawengwa’s journey as a composer and musical artist at Princeton, produced when she was a junior.