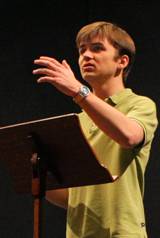 Junior Sean Effinger-Dean performs during a rehearsal of "The Antient Concert" at the Berlind Theatre. 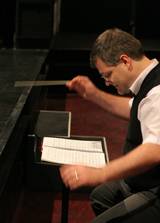 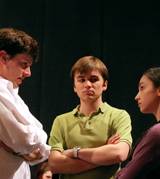 Senior Matthew Berner and freshman Molly Ephraim are among the Atelier students joining Effinger-Dean on stage this weekend.

Students in Princeton's Atelier program, which brings guest artists to campus to collaborate with students and faculty, will direct and perform "The Antient Concert," an original chamber opera written by Pulitzer Prize-winning poet Paul Muldoon and composer Daron Hagen. The performance, which is free and open to the public, is scheduled for 8 p.m. Sunday, April 17, in the Berlind Theatre. 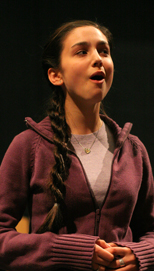 Set in the Antient Concert Rooms in Dublin in August 1904, the opera centers on four characters who are coming to terms with issues of national identity and artistic integrity. Eight Princeton student singers and four student directors will stage the opera, which features music performed by the acclaimed Borromeo String Quartet.

Muldoon, the Howard G.B. Clark '21 University Professor in the Humanities, is co-director of the Atelier program and one of the world's most celebrated poets. Hagen, his collaborator on "The Antient Concert," is a concert pianist and composer whose works have been performed by orchestras, opera companies and chamber ensembles including the New York Philharmonic, Orpheus Chamber Orchestra, National Symphony Orchestra and American Composers Orchestra.

Fostering such creative collaborations between noted artists from different media is a hallmark of the Atelier program. It was created in 1993 by Nobel Laureate Toni Morrison, the Robert F. Goheen Professor in the Humanities at Princeton, to give students an opportunity to work closely with renowned artists in a creative, intimate setting. Each course culminates in the public presentation of a new work.

This spring, in addition to the opera project, the Atelier program included a course in which students worked with Ukrainian singer Marjana Sadowska, director Roger Babb and video artist and director Lars Jan to experiment with devices and techniques for framing vocal performance. The group staged a performance titled "The Midsummer Project: Ancient Ritual Song and Experimental Video From Ukraine" in Richardson Auditorium last month.

Beginning next year, the Atelier program will expand to offer courses in the fall as well as the spring. "Demand for Atelier classes has grown so we hope that offering them in fall and spring will satisfy the growing desire of students to work with visiting artists," said Morrison, who continues to direct the program.

Muldoon added, "We feel it's vital that the experience of the Atelier, so unique to Princeton, should be made available to a wider number of students." Next fall's program will include two courses: