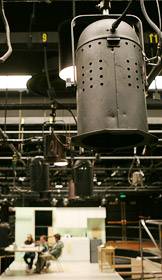 The Princeton Atelier program will present "Wind-Up," a new dance theater production that represents the first full collaboration between the directors of Philadelphia's Pig Iron and Headlong companies, Friday and Saturday, April 25-26, at the Lewis Center for the Arts. The Atelier program brings professional artists to campus for intensive collaborative work with students and faculty. Also joining in on this performance is an award-winning scenographer from New York. In this scene, the kitchen rests on large pillars 10 feet in the air. Show times are 7:30 p.m. Friday and 3 p.m. and 7:30 p.m. Saturday in the Matthews Acting Studio at 185 Nassau St. 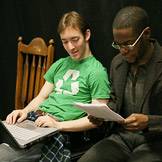 Two professional directors from Philadelphia, a scenographer from New York, an ensemble of seasoned performers and a group of Princeton students are joining forces to bring a new work to the stage Friday and Saturday, April 25-26, at the Lewis Center for the Arts. 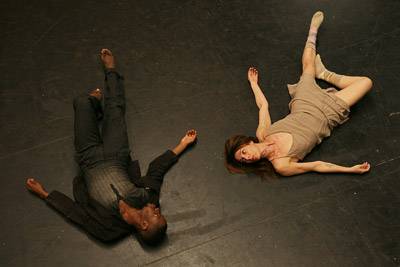 "Wind-Up" is an existential detective story where the mundane scrapes against the unreal on the boundary between awareness and identity. The piece uncovers a secret world of freaky functionaries -- ambiguous bureaucrats of a netherworld. Talking animals, underground journeys and hidden office spaces make up the landscape of this meditation on the unknown, inspired by the writings of Haruki Murakami and Tim O'Brien.

The new hybrid work represents the first full collaboration between the directors of the Pig Iron and Headlong companies, which have been at the forefront of the physical theater movement for the last 15 years, as well as amidst the blossoming renaissance of experimental performance coming out of Philadelphia. The set was conceived by Lien, a New York-based designer of sets/environments, and focuses on the interaction between audience/environment and object/performer.

Creating an experience of space that Lien characterizes as "an intimate immensity" has been a starting point for the creation of this work. Brick said that the Princeton Atelier provided the ideal environment for the three artists to cross collaborate outside the structures of their home companies: "'Wind-Up' is a new chapter in our lives as we jointly create a brand new ensemble and toss into the air our habits of how we have worked these past many years." 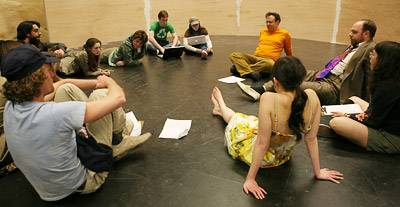 Founded in 1994 by Nobel laureate Toni Morrison, and now directed by distinguished poet Paul Muldoon, the Howard G.B. Clark '21 Professor and chair of the Lewis Center for the Arts, the Atelier program brings professional artists to campus for intensive collaborative work with students and faculty. Atelier artists select a project they want to explore in the company of students before developing it for the professional arts community.

The performance will feature an ensemble of accomplished professionals who were brought together exclusively to be a part of this new work. The cast includes Keeley Garfield, a distinguished New York choreographer and performer; Richard Crawford, founding member of the internationally acclaimed theater ensemble The Flying Machine; Brian Osborne, a Philadelphia-based actor, playwright and director; and Jaamil Kosoko, a Philadelphia choreographer and dancer. These performers will be in the company of Princeton Atelier students who have worked alongside the guest artists for the entire semester and were able to observe and participate in the creative process.

The performances are free and open to the public; however, seating is limited and reservations are strongly recommended. For tickets, call (609) 258-9220.

The performances are funded in large part by the Newhouse Foundation, Jordan Roth '97 Fellowships in Theater, and the Steven J. Hirsch '17 and Dorothy B. Hirsch Performing Arts Endowment Fund. 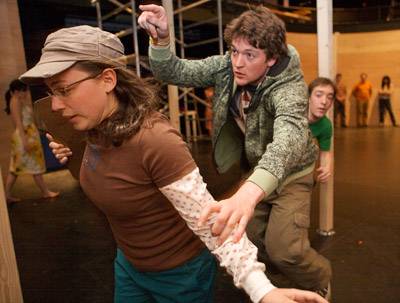