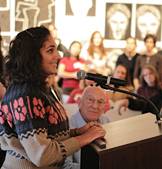 Peter B. Lewis (seated nearest podium) was honored during a naming celebration Thursday afternoon for the Peter B. Lewis Center for the Arts. During the event at 185 Nassau St., University administrators, faculty, staff and students gathered to recognize Lewis, a 1955 alumnus, University trustee and chairman of the board of the Progressive Corp., for the $101 million gift he pledged last year to support the University's major arts initiative. From left, sophomore Lianna Kissinger-Virizlay was among the students who spoke at the celebration.

Above and below left: Seniors Kelsey Johnson and Lena Neufeld presented Lewis with a special Arts at Princeton T-shirt. He also received a portfolio of student and faculty art work as well as signed copies of books by distinguished authors who are members of the arts faculty. Before the ceremony, the students gave Lewis a tour of the art studios at 185 Nassau St. 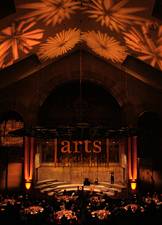 The celebration continued on Thursday evening, when Lewis was honored at a dinner on the stage of Richardson Auditorium in Alexander Hall. The courses were interspersed with performances by student dancers and musicians. Junior Brittany Haas (on stage at right) performed Southern Appalachian fiddle tunes between the salad and main course. Below left: The Nassoons, Princeton's oldest a cappella group, and BodyHype Dance Company, founded in 1991, together performed Bob Marley's "One Love" at the beginning of the dinner. Bottom left: Among those attending the dinner to honor Lewis (right) were, from left, Paul Muldoon, chair of the Lewis Center for the Arts; President Shirley M. Tilghman; and Toni Morrison, the Robert F. Goheen Professor Emeritus in the Humanities. The Thursday events were part of the official launch of Princeton's comprehensive fundraising campaign to raise $1.75 billion over the next five years, including a goal of $325 million for exploration in the arts. Photos: Denise Applewhite

Peter B. Lewis Center for the Arts launched

Princeton University on Thursday, Nov. 8, named its new arts center the Peter B. Lewis Center for the Arts in recognition of the $101 million gift Lewis pledged last year to support the University's major arts initiative.

Events held Thursday as part of the official launch of Princeton's comprehensive fundraising campaign honored Lewis and his contribution to enhancing the role of the creative and performing arts on campus and in the community. Lewis' gift is part of the University's efforts to raise $1.75 billion over the next five years, including a goal of $325 million for exploration in the arts.

President Shirley M. Tilghman expressed her deep gratitude to Lewis for his gift, saying it will enable the University to integrate the creative and performing arts into an undergraduate education that is second to none.

"By naming this center for Peter, we recognize both his extraordinary gift and his conviction that the arts belong at the center of any great university, where students in all fields have opportunities not only to study art, but to create it," Tilghman said. "The goal of this center is to ensure that the arts become a part of every Princeton student's experience and that they play a greater and more central role in the life of our campus and our community."

Since Princeton announced Lewis' gift in January 2006, the funds already have had a significant impact on the arts and multidisciplinary programs on campus. The gift has provided financial resources for five new courses and the faculty to support them in screenwriting, screenplay adaptation, chamber dance and choreography, film, and theatrical design.

The fund also has supported: special collaborative productions, such as the April 12-14 staging of "Boris Godunov" between the Russian State Archive of Literature and Art and Princeton students and faculty in academic departments and performing arts groups across campus; a new series of lectures and performances by notable artists that launched with a Sept. 23 concert featuring music by acclaimed composer Michael Friedman, a visiting Hodder Fellow at the Lewis Center for the Arts; and the creation of a communications office and launch of a new website to further the mission of the Lewis Center for the Arts.

Faculty have received funding to write and direct films and to research innovative forms of dance, and a new Junior Summer Fellowship Award has been created to provide grants for outstanding students in their junior year at Princeton who undertake summer work, internships or study related to the creative independent work they will complete in their senior years.

"This center brings together two of my great passions -- Princeton, with its constant quest for excellence, and the arts, which help people to explore their limitless human creativity," said Lewis, a 1955 alumnus, University trustee and chairman of the board of the Progressive Corp. "I am very proud to be part of launching this exciting new addition to the life of the University."

Lewis stood before a crowd of University administrators, faculty, staff and students gathered at 185 Nassau St. for a naming celebration Thursday afternoon as he was honored by a series of gifts that included a portfolio of student and faculty art work. He also received signed copies of books from Paul Muldoon, Toni Morrison, Joyce Carol Oates, Jeffrey Eugenides, James Richardson, C.K. Williams, Edmund White and other distinguished authors in the center's world-renowned Program in Creative Writing. 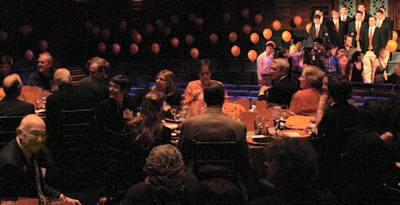 Thursday evening, Lewis was feted at a celebratory dinner on the stage of Richardson Auditorium in Alexander Hall. The courses were interspersed with performances by student dancers and musicians and the reading of a poem by Muldoon. The evening concluded with a rendition of "Old Nassau" by 1981 alumnus and jazz guitarist Stanley Jordan.

"Peter Lewis has recognized that the University as an institution has now taken on the role of patron of the arts," said Muldoon, Princeton's Howard G.B. Clark '21 University Professor in the Humanities, professor of creative writing and chair of the Lewis Center for the Arts, thanking Lewis for his gift. "It's a role we at Princeton embrace enthusiastically, but it's a role we simply wouldn't be able to envision were it not for the munificence and magnanimity of Peter Lewis himself." 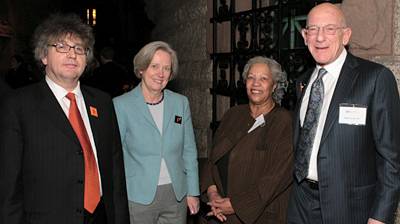 In his 35 years at the helm of Progressive, Lewis has transformed the firm into the nation's third largest auto insurance company and introduced consumer conveniences that have influenced the entire industry. His philanthropy has supported organizations in the arts, sciences, education and progressive reform. His many gifts to Princeton include funding for the Lewis-Sigler Institute for Integrative Genomics and the Peter B. Lewis Library, designed by renowned architect Frank Gehry and scheduled to open in 2008. Lewis' gift in support of Princeton's arts initiative is the largest single gift to the University in modern history.

A "Celebration of the Arts at Princeton," including remarks by Lewis, Muldoon and Tilghman, will be held at 5 p.m. Friday, Nov. 9, in Richardson Auditorium. The event is free, and doors open to the general public at 4:45 p.m. The event will feature the Princeton premiere of "Margaret's Lullaby," an aria from a new opera with a libretto by Toni Morrison, and also will include performances by Princeton student music, theater and dance groups.