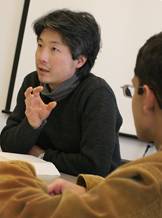 Novelist Chang-rae Lee is the current director of Princeton's Program in Creative Writing, which allows undergraduates to pursue original work in fiction, poetry and translation while working closely with practicing writers on the faculty.

At left: Paul Muldoon (second from left), shown here leading a poetry workshop, is one of many renowned writers on the creative writing faculty at Princeton. The Pulitzer Prize-winning poet serves as founding chair of the new University Center for the Creative and Performing Arts, which was created as part of an initiative to enhance the role of the creative and performing arts at Princeton.

Princeton's renowned Program in Creative Writing offers undergraduate students the unique opportunity to pursue original work in fiction, poetry and translation under the guidance of some of the world's best-known writers.

The creative writing program provides individualized instruction and workshops of up to 10 students. Each year, approximately 15 to 20 seniors write a creative thesis such as a novel or a collection of short stories, poems or translations. Throughout the academic year, several distinguished poets and novelists come to campus to read from their work. Recent speakers have included Don DeLillo, Jhumpa Lahiri, Dave Eggers and Jonathan Safran Foer, a 1999 Princeton graduate whose debut novel, "Everything Is Illuminated," grew out of his senior thesis.

"The creative writing program was one of the best parts of my academic experience at Princeton," Elizabeth Landau, a member of Princeton's class of 2006, wrote on the program's Web site. "In fiction workshops I had the opportunity to receive guidance from authors I admire, and to read the stellar work of my peers.

"I had always dreamed of writing a novel, and through the senior thesis program my dream came true," Landau wrote. "It is incredible to watch your own novel grow over the course of a year, beginning with a few ideas over the summer. Joyce Carol Oates has been a wonderful adviser and mentor. I am so happy I came to Princeton just to have these kinds of opportunities to become a better writer, and to work with some of my favorite authors one-on-one."

The program began in 1939, when English professor R.P. Blackmur set up a creative arts program that was, from the outset, notable for the distinction of its faculty. Blackmur's first "general adviser" was Allen Tate, who was followed by writers such as John Berryman, William Meredith, Robert Fitzgerald, Sean O'Faolain, Richard Eberhart, Kingsley Amis and Philip Roth.

In 1965, Edmund Keeley became director of the creative writing program, as it had become known, and was joined in 1966 by Theodore Weiss as a resident fellow. Together they expanded the program, bringing in such distinguished writers as Elizabeth Bowen, Thom Gunn, Anthony Burgess, Galway Kinnell and Russell Banks.

Today the program plays an integral role in a major initiative to enhance the creative and performing arts at the University. Princeton earlier this year established a new University Center for the Creative and Performing Arts and named Muldoon, the Pulitzer Prize-winning poet, as its founding chair. In this role, Muldoon -- who directed the creative writing program from 1993 to 2002 -- oversees, coordinates and encourages exchange among the programs in creative writing, theater and dance, and visual arts.