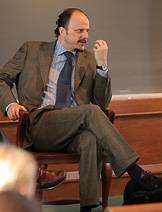 At left: One of the aims of the course was to create a shared intellectual experience for a group of students — and get them hooked on modern literature, according to Oliver Arnold, associate professor of English. He conceived of the idea for the course with Michael Wood, the Charles Barnwell Straut Class of 1923 Professor of English and Comparative Literature, and Claudia Johnson, the chair of the English department.


Below left: Eugenides spoke with Wood, who oversaw the course, and students about his novels "The Virgin Suicides" and "Middlesex." He brought along his dog Edsel (at right) to class.

In her first semester at Princeton, freshman Megan Leahy had some of the biggest names in literature on the Princeton faculty as her instructors — acclaimed novelists Jeffrey Eugenides, Toni Morrison, Joyce Carol Oates and Edmund White, not to mention world-renowned poets Paul Muldoon and C.K. Williams. And that was just in one class.

Leahy is taking "Princeton University Reads," a new course in the English department that offers students the one-of-a-kind experience to hear some of the University's best-known poets and novelists talk about their work. The seven guest lecturers in the class, which is taught by English professor Michael Wood, have four Pulitzer Prizes, two National Book Awards, a PEN/Malamud Award and a Nobel Prize in Literature among them. 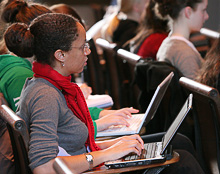 "The class is awesome," said Leahy. "It's a uniquely Princeton experience."

"Where else could you get such amazing people to read and talk?" asked Wood, who is the Charles Barnwell Straut Class of 1923 Professor of English and Comparative Literature.

Wood asked the visiting poets and novelists to name a book by another author that they would like the students to read, along with one of their own books. So Eugenides' "The Virgin Suicides" was read alongside Gabriel Garcia Marquez's "Chronicle of a Death Foretold." White's new novel, "Hotel de Dream," which imagines the final days of the poet and novelist Stephen Crane, was paired with Crane's "Maggie." Oates asked students to read her novel "Blonde" and view a selection of movies starring Marilyn Monroe, the subject of the book. Morrison suggested that "The Known World" by Edward P. Jones offered an interesting parallel to her novel "Paradise." The pairings highlighted the way that ideas are exchanged and advanced in literature, White said.

"The whole thrust of the course was to dramatize how fiction is a living art," White said. "Even the books of the past are in a constant dialogue with contemporary novels."

The class discussion brought to light aspects of White's novel that he himself hadn't thought about, he said.

"Princeton students are very good at close reading, and their questions pointed out continuities and breaks between my work and Stephen Crane's that I hadn't seen or had only suspected," White said.

Wood hopes the class will help students understand the hard work and commitment it takes to become a writer.

"The students are getting a sense of writers being real people with a job," Wood said.

When Eugenides visited the class, he told the students that he decided early in life that he wanted to become a writer.

"I approached being a writer as you would approach any career — I had to acquire a body of knowledge," said Eugenides, who became a professor of creative writing in the Lewis Center for the Arts last July. As an undergraduate at Brown University, Eugenides took creative writing classes but majored in English, he said, so that he could deepen his knowledge of literature.

After college he "eked out a living" driving a taxicab and later worked at a sailing magazine, he told the class. In his early writing days, he found it difficult to get himself to sit down and write.

"Now I'm worried about my ability to do anything else," he said.

Eugenides told the class he discovered the idea for his first novel, "The Virgin Suicides," about a family of five daughters with an obsession with suicide, during an accidental conversation with his brother's babysitter in his hometown of Grosse Pointe, Mich.

"About a year later I started writing the story, and suddenly I was writing about my hometown, which I'd never done before," he said. "Young writers tend to write about themselves, but they tend to not know much about themselves. And they tend to be, like me, not very interesting. But I did know a lot about where I grew up."

The novel, which took him three years to write, was published in 1993 to great acclaim. His next book, "Middlesex," the saga of a Greek American family as told through the eyes of Cal Stephanides, consumed Eugenides for nine years. It won the Pulitzer Prize for fiction in 2003.

The students asked Eugenides how he approaches writing about Greek Americans, why he chose the collective narrative voice in "The Virgin Suicides" and the effect of the Detroit race riots, which serve as a backdrop in both novels.

The students also heard from Monique Truong, who is spending this year at Princeton as a recipient of the Hodder Fellowship, awarded to humanists of exceptional promise. Truong's first novel, "The Book of Salt," has garnered numerous awards, including the Bard Fiction Prize, the New York Public Library Young Lions Award and the Asian American Literary Award.

"I adore the concept of the course," Truong said. "When I was in college, I was taught by the post-structuralist theorists that 'the author is dead.' I was so dismayed, probably because I knew that I wanted to be the author one day. … I would have loved to have had a class like Professor Wood's to balance out all of that erasure of the author. In any case, I think that a dialogue is always better than a monologue."

Truong found the class discussion of her work thrilling. The students were "engaged, astute and well-prepared," she said.

The class was so popular that even students who hadn't signed up for it were attending, said sophomore Justin Frick.

"I had people who weren't in the class ask me when certain authors were speaking, so they could come to the lecture," he said. "Being able to listen to some of the greatest modern authors discuss their own works was a mind-blowing experience."

One of the aims of the course, in fact, was to create a shared intellectual experience for a group of students — and get them hooked on modern literature, said Oliver Arnold, associate professor of English, who is the departmental representative. Arnold conceived of the idea for the course with Wood and Claudia Johnson, the chair of the English department.

"We hope that 'Princeton University Reads' will inspire students to read contemporary fiction and poetry long after they have graduated," Arnold said.

The English department is hoping eventually to make the lectures available online as video downloads for alumni and members of the Princeton community.

For freshman Jacquelin Hedeman, hearing the authors discuss their work was fascinating, but the comments of her fellow students were equally intriguing, she said.

"I would listen to the authors and come up with my own opinion about the work and then go to precept, where there would be 10 or so different opinions. It was great," she said. "Once a writer writes something, it really does belong to readers to make of it what they will. It was amazing to see that firsthand."