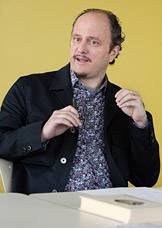 Princeton creative writing professor Jeffrey Eugenides takes readers into the classroom in his new novel, "The Marriage Plot," about three college students on the cusp of graduation. In his own classroom at Princeton, Eugenides talks to students about his creative process. "I try to have my students realize that all the mistakes they're making are mistakes that I've made and sometimes continue to make," he said.

In his new novel "The Marriage Plot," Princeton creative writing professor Jeffrey Eugenides takes the reader into a college classroom where English major Madeleine Hanna is trying to carve out a life for herself in which literature is a guiding force. Eugenides, who himself was once a student with similar aspirations, hopes to help Princeton undergraduates also engage deeply with writing in his own classroom. Teaching, he says, is one of the toughest challenges he faces.

Teaching "is in a way the most difficult thing I do," Eugenides said, who talks about his writing and teaching in the accompanying video. "I have a much easier time standing up in front of 500 people and giving a lecture or reading my work than meeting the 10 faces around a seminar table and trying to say something that's useful to them. It's a hard task, and one I certainly haven't mastered." 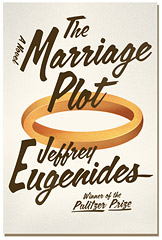 "The Marriage Plot" centers on Madeleine Hanna, who is studying semiotics while secretly clinging to her enjoyment of the old-fashioned storytelling in books by Jane Austen and George Eliot. "What exquisite guilt she felt, wickedly enjoying narrative!" Eugenides writes. (Photo courtesy of Jeffrey Eugenides)

Eugenides is, however, a master of the modern novel, having written the critically acclaimed "The Virgin Suicides" and "Middlesex," winner of the 2003 Pulitzer Prize in Fiction.

His new novel, "The Marriage Plot," opens on graduation day at Brown University — Eugenides' alma mater — and tells the story of three students on the cusp of graduation and the love triangle in which they become entangled. Set in the early 1980s, the novel is a coming-of-age tale that follows the characters — the lovely, bookish Madeleine; her boyfriend, depressed genius Leonard Bankhead; and the lovelorn, spiritual seeker Mitchell Grammaticus — as they navigate college semiotics, clinical depression, a post-collegiate trip to Calcutta and the pain that often accompanies love. The title makes reference to the narrative structure of the 19th-century novels Madeleine is studying, in which the central concern of the plot is a woman's marriage prospects.

Eugenides, a professor of creative writing in the Lewis Center for the Arts, arrived at Princeton in 2007 to assume his first full-time faculty position. He briefly taught at Princeton from 1999 to 2000 before moving to Berlin, where he wrote full time.

Teaching, for him, "is mainly remembering what it was like when I was sitting in the chair across from my creative writing teacher," said Eugenides, who earned a master's degree in English and creative writing from Stanford University. "I try to have my students realize that all the mistakes they're making are mistakes that I've made and sometimes continue to make." 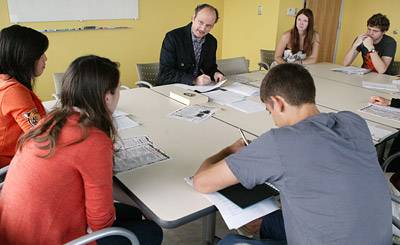 For senior Megan Hogan, studying with Eugenides "definitely changed how I write. My prose is much more descriptive and confident now, and I venture further into my characters' heads." This semester Eugenides is teaching "Introductory Fiction" and traveling on a 17-city book tour for his new novel. (Photo by Frank Wojciechowski)

Megan Hogan, who is working with Eugenides on her senior thesis, said, "He encourages you to take risks, to approach subjects and styles and themes you always wanted to write about but didn't think you could." Hogan described him as "unfailingly enthusiastic" and "incredibly honest about your work."

Taking Eugenides' class her sophomore year "definitely changed how I write," Hogan said. "My prose is much more descriptive and confident now, and I venture further into my characters' heads. Even after stories of mine had been workshopped in class, Professor Eugenides would invite me to his office hours to discuss them some more."

Wrestling with semiotics and storytelling

Writing "The Marriage Plot," which Eugenides started a few years before coming to Princeton, was a chance to reflect on his undergraduate days, when he flirted with being an actor, wore thrift-shop suits and studied semiotics, a critical approach to studying literature and other cultural forms focused on the analysis of signs, symbols and the things to which they refer.

"Semiotics was all the craze in the '80s, especially at Brown," he said.

While Madeleine wrestles with what she sees as the coldness of semiotics, she secretly clings to her enjoyment of the romantic intrigues and old-fashioned storytelling in books by Jane Austen and George Eliot. "What exquisite guilt she felt, wickedly enjoying narrative!" Eugenides writes.

In the novel, Eugenides draws from his own experience traveling in India after college, when he volunteered for a brief time at Mother Teresa's Home for Dying Destitutes. The character Mitchell also visits the Mother Teresa home, placing pills on the patients' tongues and giving them head massages while pining for Madeleine.

The chapter on Mitchell's travels in India "is the shortest in the book and took me the longest to write," Eugenides said. "The difficulty was to get distance between my own memories and the fiction I was trying to create." He rewrote the chapter several times, eventually trimming 60 pages.

While Eugenides dips into his life experience in his fiction at times, he says he prefers not to. "Writing autobiographically is difficult for me and it causes a lot of trouble, so I try not to stay too close to my life, even though people will always think I'm writing about my life."

But he does rely on his own emotional experiences to shape his characters. 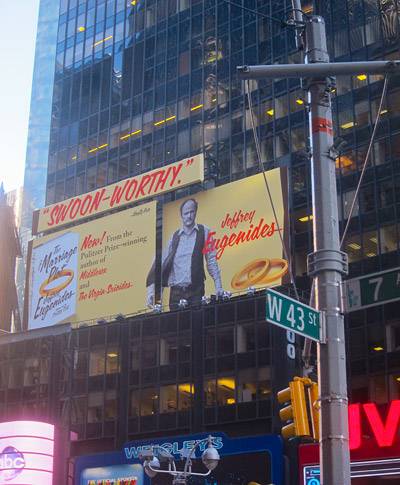 A billboard for Eugenides' new novel, "The Marriage Plot," looms over Times Square. On Oct. 30, the book debuted at No. 2 on The New York Times best-seller list. (Photo by Nick Barberio)

"All of the characters in this book are like me in many ways," he said. For example, Mitchell, like Eugenides, is from Detroit and is half Greek. "I usually have a strong emotional, intellectual connection with all the characters, including the female characters," he said. "You can disguise parts of your life, especially if you write from a different gender."

Writing, for Eugenides, can be a rewarding experience or a demoralizing one, "depending on the day," he said.

He explained that he is usually pretty tight-lipped about a work-in-progress, but a few years ago he opened up to fellow Princeton creative writing professor Edmund White about what he was working on. The new novel, then in its early stages, featured a family coming together for a debutante party, which occurred at the end of the novel. When Eugenides described the story to White, he responded, "Don't do it. A party at the end never works." The conversation prompted Eugenides to take a hard look at what he had written. Ultimately, he put aside the debutante story but kept the characters, transforming the story into "The Marriage Plot."

"I usually don't talk about my work to anyone. I'm pretty secretive about it," Eugenides said. "But I was glad I opened up to Ed, because when he said it, it started me thinking."

White was surprised to later learn how seriously Eugenides took his comments, but he is enjoying the results, he said.

"I'm loving 'The Marriage Plot,' which is, among other things, a very funny satire of academic life and its fads," White said.

Encouraging students 'to be ambitious in their own writing'

Eugenides made his literary debut in 1993 with "The Virgin Suicides," which tells the story of five sisters who commit suicide, narrated by the teenage boys who are mesmerized by them. Much of the book was written while Eugenides worked as an executive secretary at the Academy of American Poets, which eventually fired him for his extracurricular writing. The novel was soon bought by a publisher, and when it came out, Eugenides became "a literary celebrity," according to The New York Times. "The Virgin Suicides" was later made into a film by director Sofia Coppola.

His next novel, "Middlesex," published in 2002, is the story of Cal Stephanides, whose genetic abnormality is conveyed in an unforgettable first line: "I was born twice: first, as a baby girl, on a remarkably smogless Detroit day in January of 1960; and then again, as a teenage boy, in an emergency room near Petoskey, Michigan, in August of 1974." "Middlesex," about the life of a hermaphrodite, landed a pair of coveted trophies: it won the Pulitzer and was selected for Oprah's Book Club. It has since sold 3 million copies.

Winning the Pulitzer "didn't change my life or make writing different," Eugenides said. "But it changed the fate of 'Middlesex' quite a bit, which I'm grateful for, because the subject matter seemed a little off-putting to many people."

Coming nine years after "Middlesex," "The Marriage Plot" was highly anticipated and has been enthusiastically received. Its publisher, Farrar, Straus and Giroux, announced the novel's arrival with a billboard in Times Square and ordered an initial print run of 400,000 copies. On Oct. 30, the book debuted at No. 2 on The New York Times best-seller list. Eugenides is currently on a 17-city book tour, but is still teaching "Introductory Fiction" this semester.

"My classes are full of really smart students who are good writers," he said. "Workshops depend not so much on the teacher as the students. If the students like to talk about the work and are perceptive readers, then everyone benefits from the experience. I try to tell them stories about how I wrote my own work -- I think it's beneficial for them to see that I am often in doubt about how to proceed, and to share strategies I've used to solve problems."

Susan Wheeler, the director of the Program in Creative Writing at Princeton, said Eugenides "encourages his students to be ambitious in their own writing, and to have high expectations of each other. The same mixture of humor, intelligence, insight and empathy evidenced in his fiction marks him as a person."

As "The Marriage Plot" takes flight, Eugenides' students are seeing firsthand how a writer takes his work to the public. Hogan marveled at having a thesis adviser who has a billboard in Times Square and takes her out for tea to discuss her thesis: "He has a larger-than-life personality, and he buys you tea and chats with you about your life." That, she said, "is quintessentially Princeton."