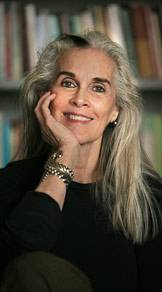 Novelist Susanna Moore, who teaches creative writing in Princeton's Lewis Center for the Arts, has written novels of compelling prose that bring to life the many facets of women's lives. She shares insights with students from a writing career that has traveled in many directions since her 1982 debut with her semi-autobiographical novel "My Old Sweetheart."

When creative writing professor Susanna Moore begins a writing class, she usually starts with this assignment: Write about yourself.

"Young writers reasonably say, 'I don't know what to write about,' so writing about yourself is a very literal way to begin," said Moore, who spent 20 years teaching at various institutions before coming to Princeton in 2007. "The point always is to be writing something -- it leads to more writing."

In Moore's case, writing about herself has led to many other subjects. She launched her career as a fiction writer in 1982 with the semi-autobiographical novel "My Old Sweetheart," a lyrical story about growing up in Hawaii with a glamorous but deeply troubled mother. The New York Times called it "a novel of shimmering beauty and sadness."

Over the next 25 years, Moore's writing traveled in many directions -- to Calcutta in the 1830s, inside the walls of a women's prison and into the psyche of a college professor who experiments with risky sexual liaisons. Moore's graceful and compelling prose has brought to life the many facets of women's lives, from the hidden anguish of a 1950s childhood to the brutal underside of prison life.

In the classroom, Moore, who is a lecturer in creative writing in the Lewis Center for the Arts, has shown students how to make their writing push boundaries and reveal essential truths. "She dares you to tell the truth, to make your fiction real," said junior Ellen Adams. "She challenged us to make our writing credible, not just to make it sound nice."

Moore's own work is "daring, honest, provocative and, perhaps above all, precise," said Chang-rae Lee, director of the Program in Creative Writing, who was instrumental in bringing Moore to Princeton. "There is a wonderfully rigorous architecture to her sentences and intellect, but one girded by a bit of the wild, and I hoped our students would find her challenging and exhilarating."

Moore grew up on the island of Oahu, the eldest of five children. She spent much of her childhood barefoot, riding her rusty Schwinn all over the island, consuming books in a secret spot in a grove of coconut trees and keeping a watchful eye on her mother, who suffered nervous breakdowns.

Moore recently revisited that period of her life in her 2007 nonfiction book "Light Years," which intersperses recollections from her childhood with favorite literary passages about the sea from "Robinson Crusoe," "Moby-Dick," "Treasure Island," "To the Lighthouse" and other novels. The literary selections are from the commonplace book -- a collection of quotations and personal reflections -- Moore has kept since she was a child.

"No memory presents itself of my first acquaintance with the sea," "Light Years" begins. "It was always there, and I was always in it." 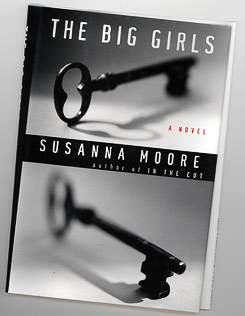 Moore's latest novel, "The Big Girls," offers a look inside the walls of Sloatsburg, a women's prison.

Exploring 'the condition of being a woman'

"'In the Cut' was not what readers expected of me," said Moore. "Before it was published, I was seen as a women's writer, which meant that I wrote movingly about flowers and children."

But Moore doesn't see an abrupt shift in her work. All her novels are about "the moral complexity of taking responsibility ... and the condition of being a woman," she said.

"One Last Look," her 2003 novel, is an account of the life of fictional 19th-century British aristocrat Lady Eleanor, who moves to India with her brother, the new governor-general. The novel takes readers into the formal soirées and the squalid huts of Calcutta to experience how Lady Eleanor gradually abandons her prejudices.

Moore turned to India as a subject after living in Calcutta for several months. "I was reading all of the diaries and journals written in India that I could find," she said. She especially was intrigued by the journal of Emily Eden, who lived in Calcutta in 1852 with her unmarried brother, Lord Auckland, when he became governor-general. "I began to think that her life, although far grander, was not that different from the life that I was leading," making that distant period accessible to her imagination, Moore said. "It's a book about difference, and intellectual and aesthetic snobbery."

Moore's latest novel, "The Big Girls," brings readers inside the walls of Sloatsburg, a women's prison where the main character, Helen, is serving a life sentence for murdering her children. Moore wrote the novel to explore the question of whether a woman who kills her children is, by definition, insane. "The Big Girls" presents a compelling picture of prison life, portraying the emotional bonds that inmates create to replicate family ties and the details of living in a cell with half a locker for your possessions and a metal plank for a bed.

Moore had never visited a prison before writing the first draft of the novel, but working on "The Big Girls" led her to begin teaching a writing class at a federal detention center in Brooklyn. She now teaches a course in New York City for young people who just have been released from prison.

"They are writing their memoirs for me," Moore said of the students in the program. "These are young men and women who have never written before. But once they begin, they are enraptured." 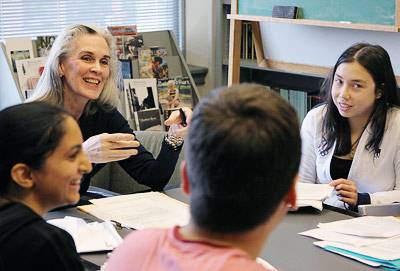 Moore has shown students how to make their writing push boundaries and reveal essential truths. "She dares you to tell the truth, to make your fiction real," said junior Ellen Adams. "She challenged us to make our writing credible, not just to make it sound nice."

At Princeton, Moore teaches "Introduction to Fiction" as well as an advanced writing course. Previously she had taught at Yale University and New York University. She finds teaching Princeton students "stimulating and fascinating -- I am certainly learning as much as they are," she said.

Discussion with students about the novels and memoirs they read for class and about their own pieces "helps me to organize my thoughts and to be clearer about things," Moore said. "To be teaching and thinking about writing is quite helpful to a writer."

Moore is a provocative force in the classroom, urging students to plunge the depths of their memories and to strive for truthfulness. Students work on several short stories throughout the term, presenting their work to each other in a workshop setting.

"Susanna taught me what it meant to be daring," said senior Jason Harper, who appreciated Moore's candid feedback about his work. "We were never coddled."

Manuscripts were returned "filled with notes, slashes, underlining," said Adams, who took Moore's class last year. "She commands a word-by-word precision I would expect from a poetry professor. My semester with Susanna helped me find both the ear and the honesty to write my stories down, to work and rework my drafts until I have pared them down to that which must absolutely be told."

Porter White, a member of the class of 2008, fondly remembered a long talk with Moore outside of class about Lily Bart, the main character in the Edith Wharton novel "The House of Mirth." "I was very upset about what happens in the book, and Susanna started talking to me about Lily as if she were a close friend fallen on hard times," White said.

Moore is "an inspiring person, a wonderful writer who taught me that while art must always serve standards of truth and technique, it must also be compassionate," White said.

Joining the community of writers in the Program in Creative Writing has been a wonderful reward for Moore, she said.

"Writing is lonely and isolating. There is an intimacy (among the faculty at Princeton) that is very beneficial," she said. "Writers here are very supportive of one another and passionate about each other's work. They read it and talk about it."

One of Moore's new colleagues, poet Susan Wheeler, a lecturer in creative writing, noticed that Moore is "a very, well, tuned-in person -- she watches everything, as good fiction writers tend to, and misses nothing -- but she's also quite kind, and so she is generous about what she sees."

Moore especially has been enchanted by observing the physical beauty of the campus, so different from the lush landscape of Hawaii about which she has written. She has taken to collecting specimens from trees and bushes, and in one of her classes the students came to share her passion.

"By the end of the term, I'd come into the classroom and there would be dozens of branches, leaves, berries and nuts for me," said Moore, who loved the detective work of researching the names and characteristics of each specimen. "If the students knew the name of a tree, they wouldn't tell me."

Moore teaches "Introduction to Fiction" as well as an advanced writing course. She said that her discussions with students about the novels and memoirs they read for class and about their own pieces "helps me to organize my thoughts and to be clearer about things."