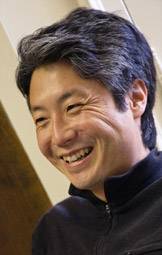 Princeton Professor Chang-rae Lee, who has been heralded for his poignant, engrossing fiction, has written an acclaimed new novel, "The Surrendered," about the lives of three people shaped dramatically by the Korean War. As director of Princeton's Program in Creative Writing, Lee brings the rigorous nature of his writing style into the classroom, where he impresses upon students the importance of scrutinizing each word on the page.

Princeton Professor Chang-rae Lee -- regarded as one of the most talented novelists of his generation -- painstakingly composes every sentence of his works, revising each one 10 or 20 times, not moving on until he is satisfied.

In the opening chapter of his acclaimed new novel, "The Surrendered," about the lives of three people shaped dramatically by the Korean War, Lee's evocative prose vividly renders one of the main characters, an orphan named June: 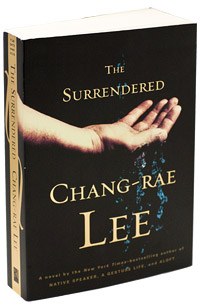 Lee to read from work Chang-rae Lee will read from his new novel, "The Surrendered," at 4:30 p.m. Wednesday, April 28, in the Stewart Theater at the Lewis Center for the Arts, 185 Nassau St. He will be joined by poet and Princeton alumnus W.S. Merwin, who will read from his work. The event is part of a yearlong reading series celebrating the 70th anniversary of creative writing at the University this year. The event is free and open to the public.

"She cast a stoney front to the world but in her sleep's throes it was for the moment vanquished and she was once again the child she had been on the eve of the war, a too-tall, soft-spoken girl of eleven who was content to play with much younger children, who was still too shy to look the village boys in the eyes, who wanted nothing more than to sit in her father's lap and hum along with his records while he drew on his corncob pipe, the smoke hanging fatly and sweetly about them."

As director of the Program in Creative Writing in the University's Lewis Center for the Arts, Lee brings this meticulous nature to the classroom, where he impresses upon Princeton students the importance of scrutinizing each word on the page.

Since publishing his first novel, "Native Speaker," in 1995 at the age of 29, Lee has been heralded for his poignant, engrossing fiction, which has explored themes of alienation and identity through the prism of Korean Americans and other immigrants to America. His novels -- the others are "A Gesture Life" and "Aloft" -- have won numerous prizes including the Hemingway Foundation/PEN Award, the American Book Award, the Anisfield-Wolf Literary Award, the Gustavus Myers Outstanding Book Award and the New Atlantic Independent Booksellers Association Book Award for Fiction.

His latest work, "The Surrendered," has garnered praise from literary critics for its gorgeous prose and for its careful examination of its characters' troubled psyches. The New York Times called the book "the most ambitious and compelling novel of his already impressive career."

Lee wanted to write a novel that wasn't so much about the Korean War as about "what war does to its participants and witnesses and those who are just caught up in it," he said. "I never conceived of the book as a Korean War novel, or even a war novel. I was interested in tracing the effects of bloodshed and violence across time in very singular characters." 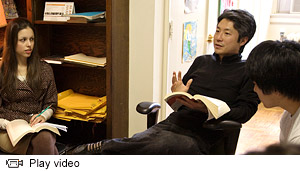 Watch a video of Chang-rae Lee discussing his new novel and his approach to teaching writing.

In the shadow of Iraq and Afghanistan

Lee began work on "The Surrendered," published in March by Riverhead Books, more than a decade ago. The riveting first chapter describes June riding on top of a train car with her 7-year-old twin siblings, Hee-Soo and Ji-Young. They have joined the throngs of refugees fleeing south on the eve of the Korean War, piling onto a train so packed that they must ride on top. When the train stops short, the twins are thrown to the ground. The wheels have severed Hee-Soo's legs and Ji-Young's foot. Hee-Soo is dead. June watches helplessly as the life drains from Ji-Young's body.

The scene was inspired by the experience of Lee's father, who witnessed his younger brother falling from a boxcar and losing his life as the family left Pyongyang, now the capital of North Korea, in 1950. Lee was born in Seoul and emigrated from South Korea to the United States when he was 3, but didn't know the details of his father's experiences before the war until he was studying the subject in a college course and pressed his father for details. The story of his uncle's death troubled Lee for years, and eventually formed the catalyst for "The Surrendered."

"The kernel of that story, which had really haunted me from the time I heard it, was something I wanted to honor and retell," said Lee, who has taught at Princeton since 2002.

Nonetheless, he put his notes aside several times to work on other novels. "I think for me this was certainly the most difficult time I've had writing a book," Lee said. "I felt like I was on a mission to Mars and I had nothing with me."

The novel was challenging in some ways because it departs from the approach of his previous works, which were in-depth psychological investigations of a central character, told in the first person. Lee started writing "The Surrendered" with a single main character -- Hector, a Korean War veteran. But he eventually expanded it to become the entwined stories, over 30 years and three continents, of three characters whose lives have been shattered and rebuilt in the shadow of the Korean War. 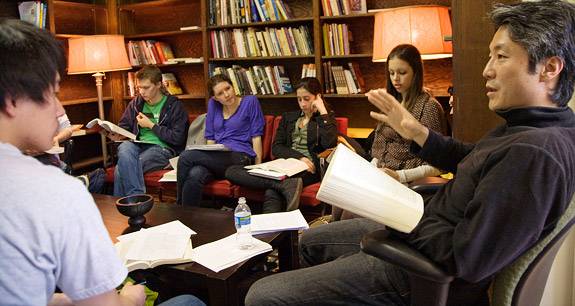 In the classroom, Lee conveys to students that the most important element of learning to write fiction is studying how others write. "To really try to take apart what happens, sentence by sentence by sentence, you just need to read very carefully, and with a different kind of hat on," Lee said.

"Chang-rae Lee is a true author of globalization," said Edmund White, a professor of creative writing in the Lewis Center. "All of his books, but especially his latest, 'The Surrendered' -- which moves from Korea to New Jersey and New York and ends in Italy -- reveal his grasp of the international situation and the tragedies of contemporary war. As a friend, teacher and writer, Chang is gentle but strong, wry but serious, boyishly curious but completely adult."

The wars in Afghanistan and Iraq became "the spiritual and emotional backdrop" to the writing of "The Surrendered," Lee said. "I think the wars -- and 9/11 -- informed the novel in a way I hadn't really expected or counted on. Those events encroach upon our lives, consciously or unconsciously."

As he shaped his characters, Lee found himself studying their imagined physical dimensions much the way a visual artist would. Besides Hector there is June, the Korean orphan who in adulthood is ravaged by stomach cancer, and Sylvie, the wife of a missionary who crosses paths with June and Hector at the orphanage she helps run in Korea after the war.

"I saw myself in the position of a sculptor, rather than a writer, really looking at what I imagined them to be on the outside and inside, in a way that I hadn't really looked at characters before," he said. "Maybe it was a different way to see usage on their bodies, and wounds."

He also researched the Korean War, mainly by reading first-person accounts and studying newspaper photographs from the period, especially images of Korean refugees and ruined Korean villages. To write one of the novel's climactic scenes, Lee traveled to Italy to visit an astonishing tribute to war: a chapel in the village of Solferino in which floor-to-ceiling shelves along every wall are stacked with the skulls and bones of soldiers who died in the 1859 Battle of Solferino, a decisive conflict in Italy's history.

Lee was struck by the hue of the chapel, which he describes in "The Surrendered" as "awash in a light pewter shade, this rubbed, high-burnished grayness."

"The chapel was shockingly startling and impressive, and made sense of a lot of things I was thinking about" in writing the novel, Lee said. He came to see the church's color and tone as "the hue of the book, of the characters and their emotions," he said.

The novel's precise, often elegiac prose was not arrived at easily.

"The way I write is, it's methodical to the point of pathology," he said. "I work through every sentence over and over again -- 10 times, 20 times. I can't seem to move on until I get each sentence the way I want to leave it, until I get it -- I don’t know if 'right' is the right word -- but I really work in those units. I like to put a lot of pressure and attention on every sentence, and I really can't move on until I'm satisfied by the previous sentence." Lee acknowledges that his method "is not a great way to write long novels -- it's kind of torture. I don't recommend it to my students."

Lee did not arrive easily at the precise, often elegiac prose in "The Surrendered." "The way I write is, it's methodical to the point of pathology," he said. "I work through every sentence over and over again — 10 times, 20 times. I can't seem to move on until I get each sentence the way I want to leave it."

What he does stress in the classroom is that the most important element of learning to write fiction is studying how others write.

On a Wednesday afternoon in February, Lee's "Advanced Fiction" class gathered in his office, eight students arranged around Lee on couches and chairs. Before workshopping several student pieces, the class discussed Rick Moody's "Boys," a short story about childhood and growing up that uses the repetition of a phrase to move the characters through their lives.

"Let's just take apart that word: 'boys,'" Lee began. "What is this word? Who are these people? Maybe we can unpack it."

"There are no names for the boys, no coherent identities," pointed out junior Johannes Muenzel.

"If there isn't any differentiation, what's the effect of that?" Lee asked.

The discussion shifted to the story's point of view.

"I perceived the house as being the protagonist," said senior Janet Tambasco.

"That's a great idea," Lee said. He asked the students about the story's refrain, "Boys enter the house."

"What is that doing for the story?" Lee asked. "Why does he have to repeat it?" For every story, said Lee, the reader must answer the question: Why does the author like it this way?

"It feels like an English class in some ways, and I really appreciate that," said junior Chloe Hall after class. "There's a lot to learn from studying more experienced writers."

For sophomore Zack Newick, who took Lee's "Introduction to Fiction" class last fall, reading short fiction by Junot Díaz, Richard Ford and Susan Minot, among others, for the class helped him appreciate "how differently one could approach the art form," Newick said.

And Lee's copious notes on Newick's stories were "especially helpful in showing me how I could channel my highly stylized voice into the constraints of narrative," Newick said.

At times, Lee finds he needs to gently nudge students to explore darker themes in their fiction, such as betrayal, addiction or violence, some of the themes in "The Surrendered."