Mario Vargas Llosa, who is the 2010 Distinguished Visitor in Princeton's Program in Latin American Studies, is spending the semester teaching writing and giving talks on campus. Students in his creative writing class have the opportunity to learn about composing a novel from the internationally celebrated author, who is from Peru.

Acclaimed Peruvian novelist Mario Vargas Llosa will spend this semester introducing Princeton students to his philosophy of writing, offering an intimate opportunity to gain insights into the thinking of an internationally celebrated author.

"I am basically a writer, not a teacher, but I enjoy teaching because of the students, and the chance to talk to them about good literature," Vargas Llosa said. "Good literature is not only entertainment -- it is a fantastic entertainment -- but it’s also something that gives you a better understanding of the world in which you live."

In his course on techniques of the novel, which he is teaching in Spanish, Vargas Llosa opened the first day of class with a discussion of what motivates people to tell stories.

"He said that human beings are living contradictions: We are born only once, but with the unique ability to imagine and desire other lives, and we write partly to soothe that desire," said junior Mayanne Chess, a comparative literature major. "It really is a basic quality of human life, but it's not often that we as writers stop to think about what motivates us, at the deepest level, to tell stories."

The class also provides students with a forum to write creatively in Spanish, which Chess is relishing, and to learn from the writing approach of Vargas Llosa, who has been a major figure in Latin American fiction since his debut novel, "The Time of the Hero," was published in 1963. "There are few things more compelling than listening to a great writer talk about his craft," Chess said. "There is so much valuable knowledge to be taken away from that." 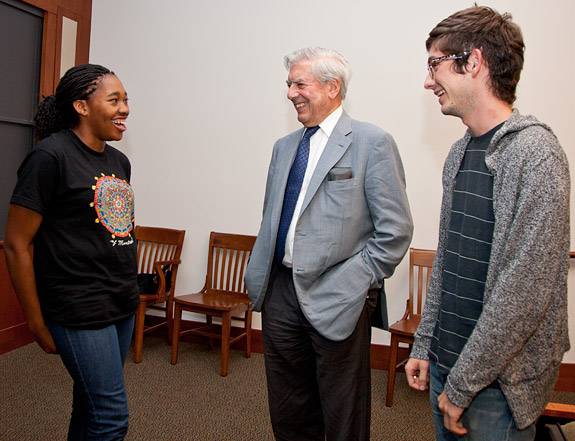 Vargas Llosa is teaching a class on Argentine writer Jorge Luis Borges that examines the writer's prose, his techniques and the sources he used in his short stories. Here, Vargas Llosa talks to (from left) juniors Chi Anunwa and Albert Fernandez after class.

The course focuses on the function of style, points of view and how to deal with time in the novel. Vargas Llosa also will discuss various narration techniques, including omitting important information in telling a story, and the story's autonomy, as well as its dependence on context.

Known for his bold and well-crafted fiction, as well as his treatment of politics and history in his novels, Vargas Llosa enjoys being in a Princeton classroom, though "teaching literature obliges you to read in a different manner," he said. "You have to read more rationally to try to explain the impression that the literature has made on you." 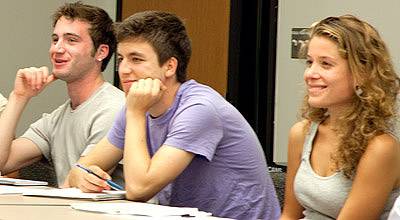 In his course on techniques of the novel, Vargas Llosa provides students with a forum to write creatively in Spanish and to discuss the function of style and points of view in the novel.

He also is teaching a class on Argentine writer Jorge Luis Borges that examines the writer's prose, his techniques and the sources he used in his short stories. The course also explores the way in which Borges disguised short stories as essays and essays as short stories.

Vargas Llosa tells his students that composing fiction is an all-consuming endeavor.

"Writing is the commitment of your entire personality and life, and I think it's the only way you can succeed as a writer -- with discipline and also a stubbornness," he said.

Sharing insights beyond the classroom

This is a return visit to Princeton for Vargas Llosa, who taught at the University in the 1992-93 academic year. In addition, his literary papers -- including notebooks, correspondence, and manuscripts of novels and other writing -- are housed in Firestone Library.

While on campus, Vargas Llosa is meeting with several groups of students and faculty as well as giving a public lecture in Spanish about the trend of trivialization in modern culture. "If the main goal of culture is to entertain, the result can be banalization," he said. "This has consequences in different levels of experience -- moral, cultural, social, political and civic." The lecture is scheduled to take place at 7:30 p.m. on Monday, Oct. 11, in Richardson Auditorium, Alexander Hall.

A prominent voice in the world of Peruvian politics -- as a prolific essayist and as a candidate for the country's presidency in 1990 -- Vargas Llosa gave a seminar Oct. 4 on contemporary culture and politics in Latin America solely for the faculty and students in the Latin American studies program.

In November he will hold a lunchtime discussion with graduate and undergraduate students about his latest novel, "The Dream of the Celt," which will be published in Spanish that month and in English next year.

The novel is inspired by historical figure Roger Casement, an Irish patriot who documented atrocities committed against natives working on rubber plantations in the Amazon and the Congo during the 19th century. Casement was "a fantastic character and a great fighter for human rights, before the concept existed," Vargas Llosa said.

In preparing to write the novel, Vargas Llosa first completed a great deal of research and created an outline, which is the approach he uses whenever he begins a work of fiction.

"The first draft is always very difficult -- a kind of fight against demoralization," he said. "I feel I'll never get over the difficulties. What I like most is rewriting. To correct, to suppress, to add, to rebuild the story -- this process is the most exciting for me."

When the novel is finished, he is gratified to have put in the difficult work to get there.

"It's so rewarding to produce this artificial life, which can enrich the life of others," he said.