This year's winner of the Nobel Prize in literature, Mario Vargas Llosa, gives an address on Monday, Oct. 11, at Princeton University, where he is a distinguished visitor this semester. His lecture focused on the state of contemporary culture and literary discourse. Photos by Brian Wilson 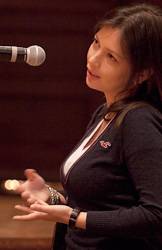 Students were eager to ask Vargas Llosa questions at his address Monday in Richardson Auditorium in Alexander Hall. Vargas Llosa offered to reply to questions posed in Spanish, French or English, but all the students addressed him in Spanish.

Acclaimed Peruvian novelist Mario Vargas Llosa, who is spending this semester as the 2010 Distinguished Visitor in Princeton University's Program in Latin American Studies, celebrated his 2010 Nobel Prize in literature with faculty, staff and students on campus Oct. 11 before delivering a public lecture.

Vargas Llosa, who was awarded the prize Oct. 7, also is a visiting lecturer in Princeton's Program in Creative Writing and the Lewis Center for the Arts. The Lewis Center and the Latin American studies program hosted a celebratory reception, where attendees raised their glasses to toast Vargas Llosa.

Known for his deep engagement with politics and history, as well as his deft storytelling and eye for the absurd, Vargas Llosa has been a major figure in Latin American fiction since his debut novel, "The Time of the Hero," was published in Spanish in 1963. He won this year's Nobel "for his cartography of structures of power and his trenchant images of the individual's resistance, revolt and defeat," the Swedish Academy said in announcing the award.

"I was wondering if it was a joke," Vargas Llosa said of the early-morning phone call he received from the academy, according to an interview on the Nobel Prize website. It was 5:30 a.m. but he was already awake, he said, preparing for one of the Princeton classes he is teaching next week.

"I'm deeply moved and grateful," he said. "I feel very surprised. Writing has been such a fantastic pleasure for me all my life that I cannot believe I am honored and recompensed for something that has been so recompensive to me." He will receive 10 million krona ($1.5 million) as the prize winner.

At a midday press conference at the Instituto Cervantes in New York City Oct. 7 with a crowd of more than 150, Vargas Llosa was asked how the prize will affect him. "I'll keep on writing to the last day of my life. I don't think the Nobel Prize will change my writing, my style, my themes -- that comes from a very intimate part of my personality. What I think the prize will change is my daily life," he quipped. "I thought these months I will spend in the United States will be very quiet, (but) everything has changed. My life will be, I think, a life in a madhouse."

At Princeton this fall, Vargas Llosa is teaching a course in Spanish on techniques of the novel and another on Argentine writer Jorge Luis Borges. Vargas Llosa has had a relationship with the Program in Latin American Studies for several years and taught at the University in the 1992-93 academic year. In addition, his literary papers -- including notebooks, correspondence, and manuscripts of novels and other writing -- are housed in Firestone Library.

Vargas Llosa is giving students an intimate opportunity -- through his courses, the public lecture and other opportunities for interaction -- to gain insights into his thinking about the craft of writing.

"I am basically a writer, not a teacher, but I enjoy teaching because of the students, and the chance to talk to them about good literature," Vargas Llosa said earlier this fall. "Good literature is not only entertainment -- it is a fantastic entertainment -- but it’s also something that gives you a better understanding of the world in which you live. Literature is an exploration of all the possibilities of human life."

The public lecture was scheduled before Vargas Llosa was awarded the Nobel Prize. To accommodate the increased interest, the location was moved to Richardson Auditorium, where he delivered a lecture in Spanish to a crowd of more than 500 on the trend of trivialization in modern culture. He explained that if the main goal of culture is to entertain, the result can be banalization, adding that all members of a society need to be aware of the consequences this can have on shared moral, cultural, social, political and civic experiences.

The lecture was free and open to the public. 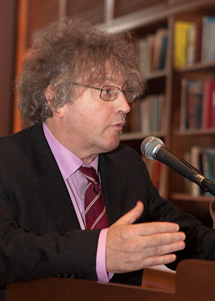 "Our students have already had a great opportunity to work directly not only with a first-rate writer, of course, but a writer who's been seen to take on social issues directly and decisively," said Paul Muldoon, chair of the Lewis Center, who is a Pulitzer Prize-winning poet. "It's important that our students, and the rest of us, are reminded that literature is a real force in the world."

Maria Julia Gutierrez, a junior from Mexico who is in Vargas Llosa's class on the techniques of the novel, said that her family was astonished that she was able to take a class with the distinguished author.

"It's something that will mark my Princeton experience and is something that I will never forget," said Gutierrez, who is majoring in the Woodrow Wilson School of Public and International Affairs and pursuing a certificate in Latin American studies. "The class has been amazing. Not only are we able to hear this famous author, but interact with him on a personal level."

Vargas Llosa is a prominent voice in the world of Peruvian politics -- as a prolific essayist and as a candidate for the country's presidency in 1990 -- who has often written about historical events in his fiction.

"He has an especially keen eye for the absurdity that characterizes Latin America's strangest historical moments," said Rubén Gallo, a professor of Spanish and Portuguese languages and cultures and the director of the Program in Latin American Studies. "He gives historical events a beautiful novelistic form. His plots are elegant and compelling, and he gives the perspective of how these political episodes affect the everyday person living in Latin America." 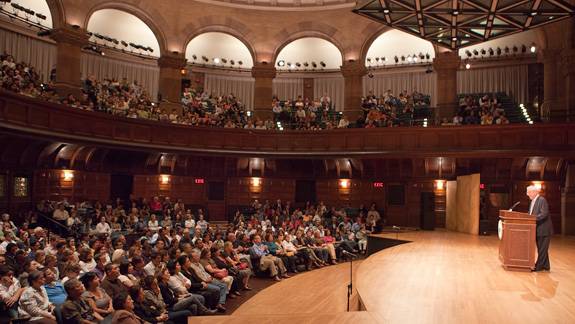 Vargas Llosa addresses the crowd at a public lecture scheduled before he was awarded the Nobel Prize. He told the audience, "It is great to be honored for doing what you love."

Literary scholar Arcadio Díaz-Quiñones, who has known Vargas Llosa since the late 1960s, said the award validated the writer's broad influence in Latin American literature and politics through his fiction and his essays. 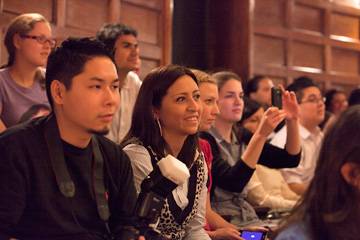 Vargas Llosa's address discussed the trend of trivialization in modern culture. He was invited to serve as the 2010 Distinguished Visitor in Princeton's Program in Latin American Studies "because he is, without a doubt, the most important Latin American writer working today," said Gallo.

"He is a masterful storyteller, able to bewitch the reader with the power of his poetic prose and the fascinating complexity of his fictional worlds," Nouzeilles said.

Historian Jeremy Adelman said that many of Vargas Llosa's political crusades have been on individual rights and freedoms.

"He has always defended the space and autonomy of culture," said Adelman, the Walter Samuel Carpenter III Professor in Spanish Civilization and Culture and director of Princeton's Council for International Teaching and Research. "Writers need to have autonomy from political structures. It's not always a popular stance but he was always a defender of it. He's a classical liberal with a fabulous imagination."

At the Oct. 7 press conference, Vargas Llosa addressed questions about whether he believed the prize was associated with his political beliefs. 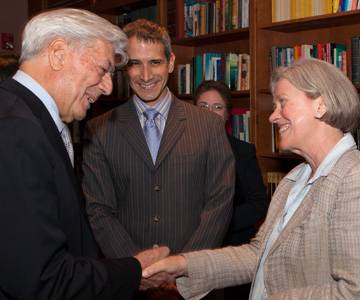 "I felt that I had never been on such intimate terms with power," said Edmund White, a professor of creative writing in the Lewis Center, of reading "The Feast of the Goat." "The will, the self-discipline, the paranoia, the deliberate cruelty, the vanity, the concealed fearfulness -- all of these aspects of an autocrat were portrayed in unforgettable and convincing detail. Vargas Llosa, unlike most writers who live quiet campus lives, has been at the very center of politics and understands it better than any other living novelist." 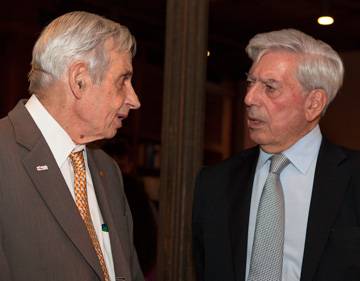 Vargas Llosa talks with John Forbes Nash Jr., winner of the Nobel Prize in economics in 1994 and a senior research mathematician in the Department of Mathematics.

Vargas Llosa tells his students that composing fiction is an all-consuming endeavor. "Writing is the commitment of your entire personality and life, and I think it's the only way you can succeed as a writer -- with discipline and also a stubbornness," he said.

The award to Vargas Llosa comes exactly 17 years after Toni Morrison, who is now Princeton's Robeert F. Goheen Professor in the Humanities Emeritus, won the Nobel Prize in literature.