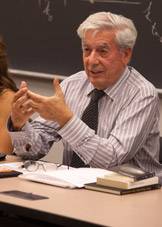 Vargas Llosa was the only winner of this year's Nobel "for his cartography of structures of power and his trenchant images of the individual's resistance, revolt, and defeat," the Swedish Academy said in announcing the award today.

A press conference with Vargas Llosa is scheduled for 1 p.m. today at the Instituto Cervantes, 211 East 49th St. (between Second and Third Avenues), in New York City. TV crews must arrive by 11:30 a.m. to set up in the institute's auditorium. All media inquiries about the press conference should be e-mailed to Barbara Celis at the Instituto Cervantes.

At Princeton this fall, Vargas Llosa is teaching a course in Spanish on techniques of the novel. He also is teaching a class on Argentine writer Jorge Luis Borges that examines the writer's prose, his techniques and the sources he used in his short stories. Vargas Llosa has had a relationship with the Program in Latin American Studies for several years and taught at the University in 1992. In addition, his literary papers -- including notebooks, correspondence, and manuscripts of novels and other writing -- are housed in Firestone Library.

"Everyone at Princeton is delighted to hear about Mario Vargas Llosa winning the Nobel Prize," said Paul Muldoon, chair of the Lewis Center for the Arts, who is a Pulitzer Prize-winning poet. "He's a visiting professor here just now, and our students have already had a great opportunity to work directly not only with a first-rate writer, of course, but a writer who's been seen to take on social issues directly and decisively. It's important that our students, and the rest of us, are reminded that literature is a real force in the world. It's no accident that Mario Vargas Llosa's next novel features Sir Roger Casement, the Irish activist who, in 1910 and 1911, reported on human rights abuses committed by rubber barons in Peru. I expect to learn more about Casement, rubber and Peru than I would from any conventional history or sociological treatise. That's the glory of what we term 'creative' writing, and the glory of a writer like Mario Vargas Llosa."

Rubén Gallo, a professor of Spanish and Portuguese Languages and Cultures and the director of the Program in Latin American Studies, said the Nobel was "a very well deserved honor" for Vargas Llosa. "For many years we were waiting for him to get the Nobel Prize because he's the most respected and accomplished novelist in Latin America. We are especially happy that this happened during his time at Princeton."

As an author, Vargas Llosa had an international breakthrough with the novel "La ciudad y los perros" (1963; "The Time of the Hero," 1966). This novel, which builds on his experiences in Leoncio Prado, a Peruvian military school, was considered controversial in his homeland. A thousand copies were burned publicly by officers from the school.

In 1975 he was elected to the Peruvian Academy. Vargas Llosa ran for the presidency of Peru in 1990, representing the FREDEMO alliance, but lost the election. In 1994 he was elected to the Spanish Academy, where he took his seat in 1996. In recent years he has lived in Barcelona, Madrid, Lima, Paris and London. He has lectured and taught at a number of universities in the United States, South America and Europe.

Updates will be posted as they become available.