In their new book, "At Home in the World: Women Writers and Public Life, from Austen to the Present," Princeton professors Maria DiBattista and Deborah Nord re-evaluate the past two centuries of female novelists as their characters leave the threshold of home. The scholars turn their attention to how these characters engage with the most pressing issues of public life: economic and social justice, slavery, warfare, democratic reforms, globalization, and the clash of cultures.

The book, published this year by Princeton University Press, originated with the course "The Female Literary Tradition," which DiBattista and Nord began co-teaching in 2004. The course was started in the mid-1980s by Elaine Showalter, the Avalon Foundation Professor of the Humanities, Emeritus, and Sandra Gilbert, whom they describe as "pioneers of feminist literary criticism."

A member of Princeton's faculty since 1972, Maria DiBattista, the Charles Barnwell Straut Class of 1923 Professor of English and professor of comparative literature, specializes in modern British and continental European literature, film, and narrative theory. In 1994, she received the President's Award for Distinguished Teaching from Princeton.

Deborah Nord, the Woodrow Wilson Professor of Literature and professor of English, focuses on Victorian literature and feminist studies. She joined the Princeton faculty in 1989 and is also an associated faculty member in the Program in Gender and Sexuality Studies. She received the President's Award for Distinguished Teaching in 2013. 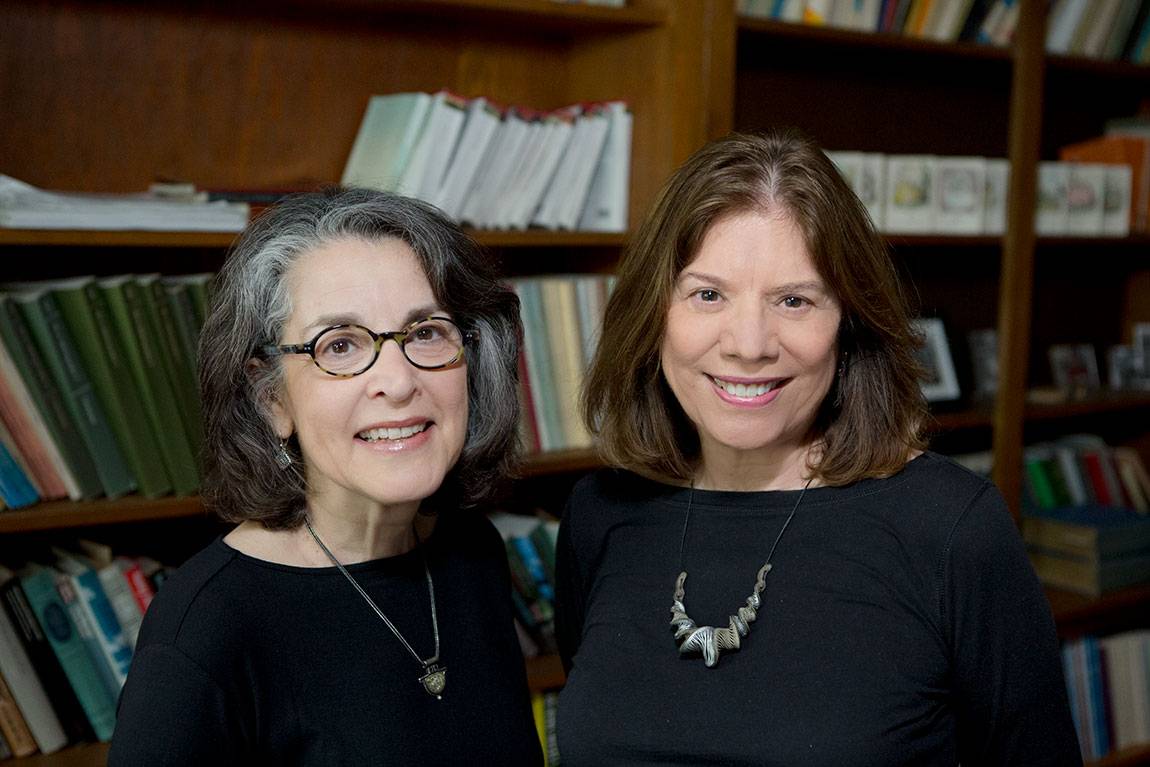 Deborah Nord (left), the Woodrow Wilson Professor of Literature and professor of English, and Maria DiBattista, the Charles Barnwell Straut Class of 1923 Professor of English and professor of comparative literature, were inspired to write their new book, "At Home in the World: Women Writers and Public Life, from Austen to the Present," while co-teaching the course "The Female Literary Tradition." (Photo by Denise Applewhite, Office of Communications)

What did each of you discover while teaching the course that sparked the idea for the book?

DiBattista: My "a-ha!" moment came while listening to Deborah give the final lecture for the course. She elaborated on the ways in which the dialectic of home and abroad that drove the stories of female protagonists by writers from Jane Austen to Nadine Gordimer was by no means always a progressive one. I realized two things: that many, and certainly the greatest, women writers of the last two centuries put the great issues of public life not at the periphery but at the center of their work; and that we should write a book together to call attention to the scope, the subtlety and indeed the imaginative daring of this body of writing.

Nord: When we got to Gordimer's "The Pickup" (2001), in which a privileged woman from a Westernized country chooses the life of a domestically bound woman in an unnamed Muslim country, I realized that Gordimer was provocatively, perhaps perversely, reversing a 200-year-old trend. This suggested that a contemporary, newly configured globe was engendering more complicated cultural paradigms for women's ideas of home and freedom. 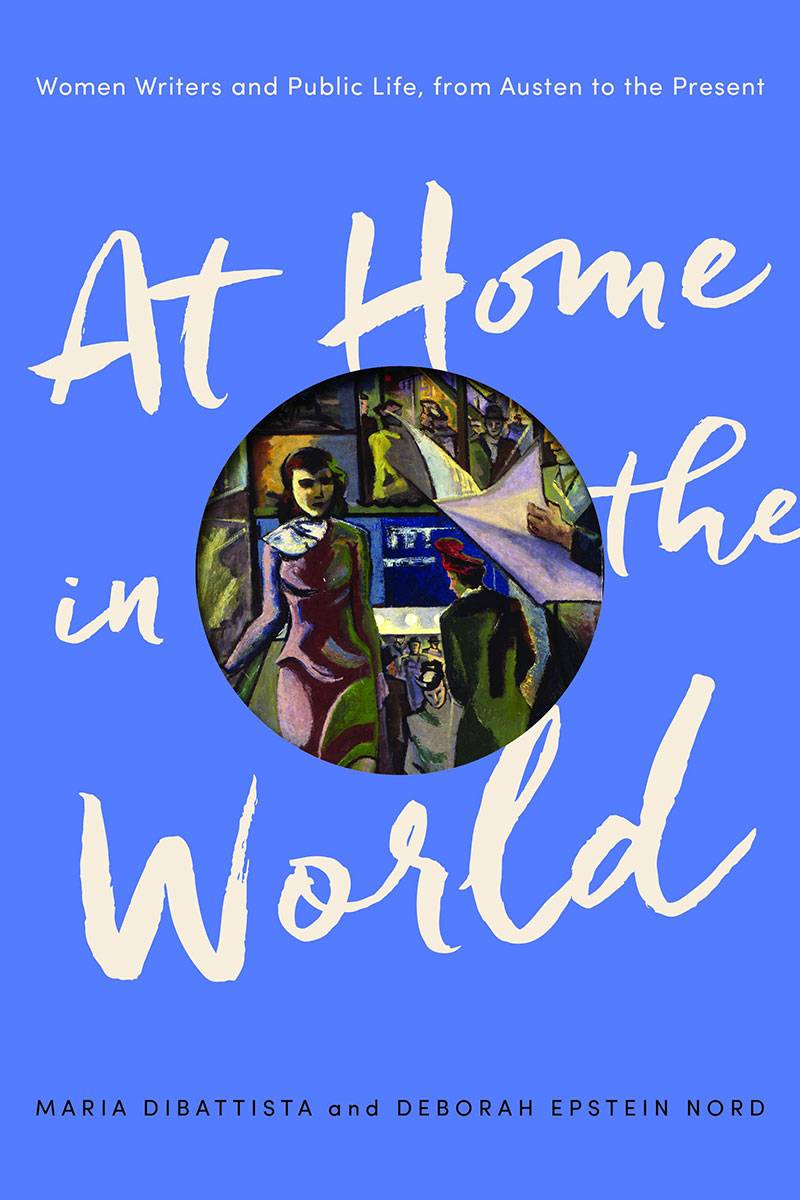 In their new book, DiBattista and Nord re-evaluate the past two centuries of female novelists as their characters leave home to engage with pressing issues of public life. (Image courtesy of Princeton University Press)

DiBattista: We composed the book proposal, sitting at a computer, sentence by sentence, in a kind of improvised duet. Thereafter, we researched and wrote our assigned chapters independently, then exchanged drafts, reworking according to the feedback — and encouragement — we gave each other. We soon became attuned to each other's cadences and turns of thought, so that there are some places where our voices become virtually indistinguishable. In fact, we get a kick out of people asking us who wrote what and are especially tickled when they guess wrong (as they often do).

Nord: We picked up threads and strands in one another's writing that then made their way into what we wrote or revised next. This process gave the writing a stronger continuity, or at least we hope so. I came to think of this process as a kind of relay race, passing the conceptual baton to the next runner-writer.

What did each of you bring to the table that complemented the other in terms of scholarship and perspective?

DiBattista: Deborah and I work in adjacent literary periods — she in 19th-century literature and culture, I in the 20th century — so there is an inevitable overlap in what we teach and write about, especially given the feminist underpinnings of our work. But there are differences in background that complement each other in less predictable ways. Deborah is Jewish, I was raised Catholic, which affected, I think, the way we responded to the spiritual dimensions of women's adventures. Deborah is especially alert to the ordeals as well as hopes of diasporic life, while I tend to seek out the sacramental potential in the mundane objects and gestures of everyday life.

Nord: My area of expertise is Victorian literature. Maria, focused on Modernism, has a more extensive knowledge of American literature than I do. But we both wandered out of our fields and comfort zones, so that not every discussion of Virginia Woolf, for example, is in one of Maria's sections! My approach tends to be somewhat more historical, and Maria is more alert to myth and archetype. Our prose styles are different but compatible.

The book is structured in six chapters: Adventure, Emancipation, Pioneers, War, Politics and Multinationals. Would you offer an example from one chapter that speaks to these themes?

DiBattista: "Pioneers" links women's personal ambition to make a home in the great world with the epic phase of America's nation-building. Willa Cather's fictions chronicle the homesteads these pioneering heroines carved out of the wilderness, but so does Zora Neale Hurston's "Their Eyes Were Watching God" (1937), whose passionate and increasingly peripatetic heroine, Janie Crawford, never gives up her search for the "people" and place that would make her feel at home.

Nord: The writers in "Emancipation" ventured into highly charged political realms — slavery in the U.S. and the plight of industrial laborers in the U.K. Their heroines also go public. For example, the title character of Elizabeth Gaskell's "Mary Barton" (1848), a heretofore blinkered, unmarried working-class woman from Manchester, travels alone by train and boat to Liverpool to testify in court. Bringing abolitionist narratives and industrial novels together also underscores the utopian and almost always out-of-reach idea of true home or, as we (and they) call it, a Promised Land for these enslaved and dispossessed peoples.

Please offer a new insight that came to you as you re-read a favorite novel when writing this book.

Nord: I was struck for the first time by the presence of sea voyages and water crossings in the final completed novels of Austen ("Persuasion"), Charlotte Brontë ("Villette") and George Eliot ("Daniel Deronda") and by the symbolic and strangely linked meanings of these journeys — some emancipatory, some reckless, some even fatal. By focusing on the ideas of leaving an incommodious home and venturing forth to purpose, vocation, adventure or the unknown, I was able to see this common pattern in novels I had read and taught many times before.

Two of the writers you discuss are connected to Princeton: Toni Morrison and Jhumpa Lahiri. How do their novels reflect your book title, 'At Home in the World'?

DiBattista: Toni Morrison's "Beloved" mounts the most devastating critique of the idea of home as a locus of love, safety and belonging. The novel also testifies to the enduring moral hope of finding a true home, a place that accommodates and nourishes the "unslaved life" where one can be, but also "own," oneself. These radically different ideas of home are evoked in the heart-rending contrast between the ironically named Sweet Home, a brutal and lethal travesty of home, and 124, where Sethe, the novel's grieving mother, finds company, comfort and instruction in how to claim ownership of herself.

Nord: The "Multinationals" chapter explores the condition of being "at home" nowhere or in two different places. What narrative choices do writers make to evoke divided lives? In Jhumpa Lahiri's fiction, immigrant women are wrenched away from their cultures and set adrift in the suburban American culture that [Betty] Friedan wrote about for a different generation and kind of woman. Experiencing the disorientation of "motherhood in a foreign land," Ashima, the mother of Gogol Ganguli in "The Namesake" (2003), eventually takes charge of her life in-between and decides to occupy two homes — the U.S. and India — and to live a life "without borders." Like Anita Desai and Gordimer before her, Lahiri questions easy assumptions about freedom and belonging — and home.

In the acknowledgments, you thank your undergraduate and graduate students. How did teaching influence your writing of this book?

DiBattista: For many of our students, feminism is not a burning cause, but a movement whose agenda has been more or less fulfilled. They are primarily interested in how women's fiction reworks the marriage plot or offers female versions of the bildungsroman, the novel of self-development. We, in turn, felt the need to emphasize how women's fiction grappled with questions of power and authority and dramatized the conflicting pull between family and self-sovereignty, between home and the world of work and political activism. Our students' prospects, their hopes, as well as their often unvoiced anxieties as they embarked on their own life adventure, inspired and touched us and were, I think, lodged somewhere in the back of our mind as we wrote.

Nord: I find students' continued interest in thinking about women's writing through a feminist lens both surprising and heartening. The resurgence of enthusiasm for Austen and the Brontës over the last 15 or so years is striking. At the same time, I have also been reminded of the need to convey to students what was radical and unsettling about these works, to challenge their assumptions about the primacy of the marriage plot, and to alert them to the sometimes scathing critiques of domestic life in those novels that seem perennially celebrated principally for their love stories.