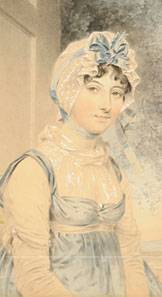 A watercolor of the early 19th-century writer Maria Edgeworth offers a close look at one of the 102 writers whose work, including her personal correspondence, is included in the new collection of Irish prose given to Princeton by 1953 alumnus Leonard Milberg. The collection includes more than 1,700 books, manuscripts, portraits, audiovisual materials and other items that illustrate Irish writing from 1798 to the present. An exhibition of select pieces from the collection is on display in Firestone Library. A symposium featuring contemporary Irish writers will take place Feb. 5-6.

The handwritten correspondence of the early 19th-century writer Maria Edgeworth, often considered the "Irish Jane Austen," is among the many extraordinary literary treasures in a collection of prose by Irish writers recently donated to Princeton University by 1953 alumnus Leonard Milberg.

The new collection complements existing collections of poetry and theater, also given by Milberg, in 1994 and 2006, respectively, making the University a foremost resource for teaching and scholarship about Irish literature.

Edgeworth, the author of more than 20 books, including several novels, is one of the 102 authors in the Milberg Collection of Irish Prose Writers, which includes more than 1,700 books, manuscripts, portraits, audiovisual materials and other items that illustrate the richness and vitality of Irish writing from 1798 to the present. 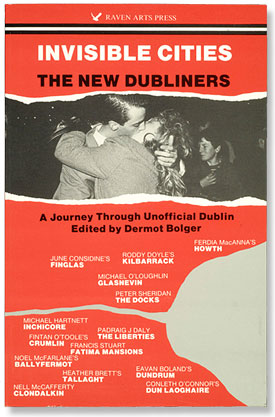 Books from the independent Raven Arts Press form part of the collection, including "Invisible Cities: The New Dubliners; A Journey through Unofficial Dublin, which was edited by Dermot Bolger and published in 1988. One of the authors published in the book, Roddy Doyle, will give a reading at the Princeton symposium.

To celebrate the collection, the University will hold an exhibition of select items opening Friday, Jan. 28, and a symposium Saturday and Sunday, Feb. 5-6, both titled "The Cracked Lookingglass: Highlights From the Leonard L. Milberg Collection of Irish Prose Writers." The symposium will feature leading contemporary Irish writers, including John Banville, Roddy Doyle, Anne Enright and Colm Toíbín.

Milberg, a noted art collector who also has donated literary collections in American poetry and Jewish American writing to the University, believes that Princeton now has one of the greatest collections of Irish literature, in all its forms, in the world.

He joked that this latest gift has allowed him to "make reparations" to the Irish poet William Butler Yeats who, in 1904 when on tour to more than 50 colleges in North America, was not invited to Princeton. "Now over a century later with the gift of my third Irish literary collection to the University, I hope Princeton has finally made amends for its 'egregious insult' to the great poet," said Milberg.

"Once again, Leonard has brought a remarkable literary collection to the Princeton University Library, opening new avenues of scholarship and teaching for faculty, students and visiting researchers. His generosity, acumen and commitment to Princeton's educational mission are greatly appreciated by us all," Tilghman said. 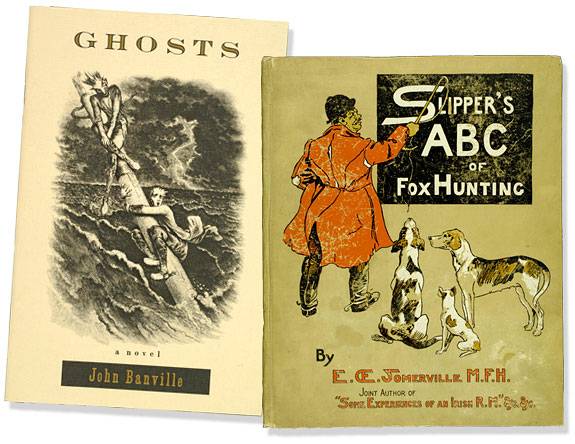 The range of Irish literature is represented with great vitality in the collection, which includes E.Œ. Somerville's "Slipper’s ABC of Fox Hunting," illustrated by the author and published in 1903, and a pamphlet advertising the novel "Ghosts" by John Banville, which was published a century later. Banville will participate in the symposium at Princeton.

Milberg gave the collection in honor of the late Princeton professor of comparative literature and renowned translator of Homer's epics Robert Fagles, who Milberg considered a "wonderful person and an extraordinary scholar." The donation also is dedicated to Milberg's longtime associate, the antiquarian book dealer J. Howard Woolmer.

Paul Muldoon, Princeton's Howard G.B. Clark '21 University Professor in the Humanities and chair of the Lewis Center for the Arts who organized the upcoming symposium, said that "the main reason for expanding the library's holdings is to give our students even greater access to materials for research and study in Irish literature." A native of Northern Ireland, Muldoon is a Pulitzer Prize-winning poet in whose honor Milberg gave the Irish theater collection four years ago.

As part of his "commitment to Princeton's educational mission," Milberg also conceived of the idea of bringing Irish novelist Toíbín to Princeton for three years to shape the collection and to place Irish prose in a more prominent position at the University.

Toíbín, the Leonard L. Milberg '53 Visiting Lecturer in Irish Letters who arrived at the University in 2009, used the materials in the collection in his undergraduate class on the Irish novel. "It was amazing to find first editions, or signed editions, of everything we had been reading, and it gave the students a sense of Irish fiction as something alive and close to them," he said. 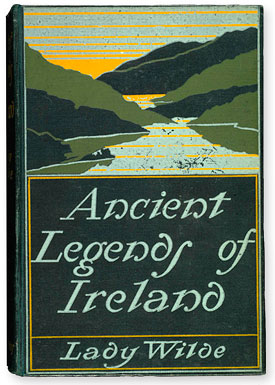 In the collection is an 1899 edition of the book "Ancient Legends of Ireland," which was written by Lady Wilde, the mother of the famous Dublin-born playwright Oscar Wilde.

According to Michael Wood, Princeton's Charles Barnwell Straut Class of 1923 Professor of English and Comparative Literature who will participate in the symposium, the collection represents a "sheer richness" that "shows what a culture can do when it manages to treat art as a wonderful mirror, as a brilliantly cracked mirror and as a whole slew of things that are not mirrors at all."

Sponsored by the Council of the Friends of the Princeton University Library and curated by Greg Londe, a graduate student in English, and Renée Fox, who completed her Ph.D. in English in 2010, the exhibition will feature books, portraits, manuscripts, audiovisual materials and assorted items that document the wealth of Irish literature. The exhibition will be on view through July 10 in the Main Gallery and in the Milberg Gallery at Firestone Library. 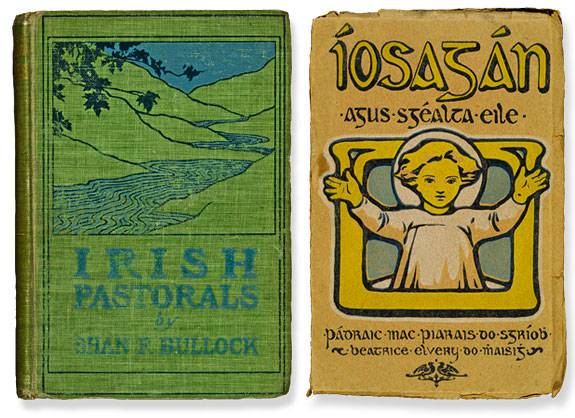 The new collection of Irish prose complements existing collections of Irish theater and prose, also given to the University by Milberg. Included in the prose collection are "Irish Pastorals" by Shan Bullock (left) and an early edition of Padraic Pearse's popular "Iosagán, agus sgéalta eile" (Iosagán and Other Stories), both from the early 1900s.

Ben Primer, associate University librarian for rare books and special collections, said visitors will encounter a range of items from different time periods and genres, including "the Irish romantic novel of the 19th century, the Blasket Island writers who composed their memories in Gaelic, modern Irish pulp fiction and the output of the fiercely independent Raven Arts Press, which published the early work of some of the best Irish novelists and essayists of today, including Roddy Doyle and Fintan O'Toole."

He noted that among the unique items on view are two of Iris Murdoch's working notebooks, letters from Elizabeth Bowen and Colum McCann, and manuscripts of short stories by Liam O'Flaherty and by Edith Somerville and Martin Ross (authors of the books that were made into the popular television series "The Irish R.M."). The exhibition also will feature radio and television interviews with contemporary Irish writers.

Accompanying the exhibition will be two major publications: an illustrated catalog that includes essays by Muldoon, Toíbín and Wood; and a special issue of the Princeton University Library Chronicle that includes unpublished essays, short stories and chapters of novels in progress from most of the living writers whose work is included in the Milberg collection. 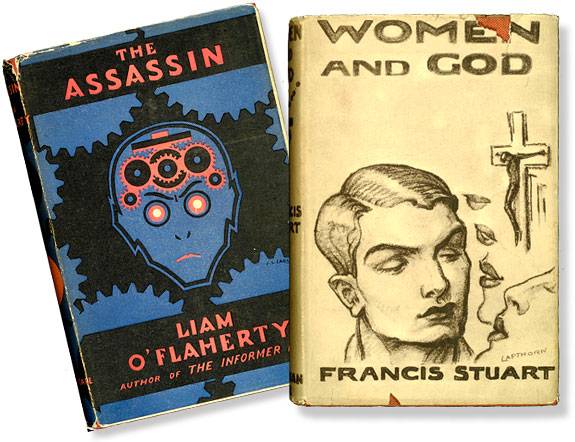 The prose collection "gives our students even greater access to materials for research and study in Irish literature," said Princeton professor Paul Muldoon. The collection includes "The Assassin" by Liam O'Flaherty and "Women and God" by Francis Stuart, which were published in 1928 and 1931, respectively.

Bringing the collection to life through readings and discussion, the symposium to be held Feb. 5-6 in various locations will feature more than a dozen Irish novelists and critics. The event is free and open to the public, but tickets will be required for the evening readings in Richardson Auditorium, Alexander Hall, Feb. 6.

"We're thrilled to have the opportunity to celebrate Leonard Milberg's latest gift by inviting to campus some of the very finest Irish prose writers of the era," Muldoon said.

Muldoon, who also is chair of Princeton's Committee for the Fund for Irish Studies, one of the event's sponsors, said the symposium will "allow students to have firsthand experience of some of the writers in person" and will "enable the wider Princeton community, who have so stalwartly supported our Fund for Irish Studies events over the past 10 years, to meet some of their favorite Irish authors."

The symposium will include an interview with Banville, lectures by R.F. Foster and Enright, and readings by Banville, Enright, Doyle, Emma Donoghue, Hugo Hamilton, Patrick McCabe, Colum McCann, Belinda McKeon and Paul Murray. The events will be chaired by Muldoon, Toíbín, Wood and Deborah Treisman, who is the fiction editor of The New Yorker.

Primary sponsors of "The Cracked Lookingglass" include the Council of the Friends of Princeton University Library, the Committee for the Fund for Irish Studies, the Lewis Center for the Arts, the Office of the President and Culture Ireland. Additional support comes from the Council of the Humanities, the Department of Comparative Literature, the Department of English and the Princeton Institute for International and Regional Studies.

For more information about the exhibition and the symposium, visit the "Cracked Lookingglass" website. Tickets may be reserved through University Ticketing by calling (609) 258-9220.