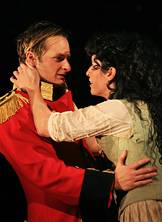 Running concurrently with the Players & Painted Stage Symposium is the performance of playwright Brian Friel's "Translations" at the McCarter Theatre Center. The play, which has its opening Oct. 13 and runs through Oct. 29, is set in a rural 19th-century Irish village that faces the arrival of a corps of British military engineers, there to map the area and rename its places. The presence of these outsiders forces the inhabitants to confront a changing and uncertain future, and under this shadow an impossible romance between a soldier (Chandler Williams) and a village girl (Susan Lynch) begins. 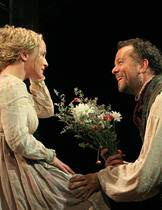 Manus (David Costabile), a teacher, works with one of the villagers, Sarah (Morgan Hallett), who has been mute most of her life, at a small hedge school housed in an old barn.

Below left: The cast includes (from left) Susan Lynch, Alan Cox, Michael FitzGerald and Geraldine Hughes. Friel's masterpiece is considered a moving reflection on Irish history, and a story about community, colonialism, identity and the power of language as it affects us all.

Distinguished Irish actors, theater directors and other luminaries well known for their award-winning roles on stage and screen will gather at Princeton University Oct. 13-15 for discussions, readings and performances highlighting the Players & Painted Stage Symposium.

Among the many features of the event, Irish actor Stephen Rea, popularly known for his Oscar-nominated performance in the movie "The Crying Game," will join Ireland's leading cultural critic Luke Gibbons in a conversation about theater's role in art and politics, and Irish director Garry Hynes, the first woman to win a Tony Award for theater direction, will give a separate talk sharing her experiences. Running concurrently with the symposium will be the performance of playwright Brian Friel's "Translations" at the McCarter Theatre Center in Princeton.

The symposium is free and open to the public and is being held to celebrate the donation of an expansive collection of Irish theater announced by the University last month. Class of 1953 alumnus Leonard L. Milberg donated to Princeton more than 1,000 plays, photographs, playbills and other works documenting the history of Irish theater dating back 160 years. The symposium will reflect on the long theatrical legacy.

"Irish drama is marked by the peaks and the valleys of its remarkable theatrical landscape, and what better way to reflect that than with an investigation of the full range of dramatic work produced by Irish playwrights over the last 100-plus years?" said Michael Cadden, the director of Princeton's Program in Theater and Dance and one of the principal organizers of the symposium.

"The Players & Painted Stage Symposium brings together a distinguished group of Irish theater practitioners, and a few Princeton-based artists and faculty members, to discuss the past, present and future of Irish theater," Cadden said.

The weekend of events will begin at 4:30 p.m. Friday, Oct. 13, with a keynote address delivered by Joe Dowling, former director of Ireland's national theater, the Abbey Theatre, and current artistic director of the Guthrie Theater in Minneapolis. In a conversation at the Stewart Film Theater at 185 Nassau St., Dowling will discuss his coming of age in Irish theater and the differences between Irish and American theater practices.

The exhibition showcasing the Leonard L. Milberg Irish Theater Collection will then have its official opening at 6 p.m. Friday in Firestone Library, featuring the gem of the collection, the unpublished manuscript "The Cooing of Doves" by renowned playwright Sean O'Casey.

Most events will take place on Saturday, Oct. 14, including a discussion with Hynes, the artistic director of Galway’s Druid Theatre. She will talk about her work on a range of Irish plays, as well as her direction of McCarter Theatre's production of "Translations," which will have its opening Oct. 13. Many in the cast are Irish, and two are making their American stage debut. 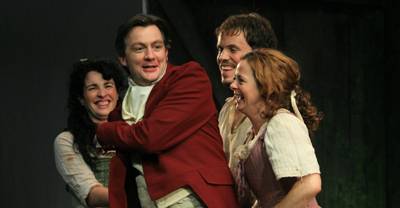 "'Translations' is widely acknowledged as playwright Brian Friel's masterpiece, and it directly asks the question of what it means to be Irish and takes head-on the questions about Irish language and how language defines Irish culture," said Emily Mann, McCarter's artistic director. "It's so much about now -- looking at the present and the past, as all great history plays are -- so it was a perfect choice on all levels and most particularly for the symposium that's being celebrated at the University."

Mann will join Hynes and Fiach Mac Conghail, the current director of the Abbey Theatre, in the Saturday discussion. Mann and Hynes will also give a special post-performance discussion after a Sunday matinee of "Translations." Ticket purchases through the McCarter box office are necessary for the general public to attend all performances of "Translations," which will run through Oct. 29.

A full schedule for the symposium is available online. Other symposium highlights include the conversation "Theater at the Crossroad of Art and Politics" with actor Rea and theater critic Gibbons; renowned Irish actress Fiona Shaw, of "Harry Potter" fame, reading from the work of Irish playwright Marina Carr; a reading of O'Casey's long-lost "The Cooing of Doves" directed by Princeton Lecturer in Theater and Dance Timothy Vasen; and a roundtable discussion in which Rea, Gibbons, Hynes and Shaw will join Irish playwrights Mark O'Rowe and Vincent Woods to discuss the history of Irish theater.

Cadden will moderate the roundtable with Pulitzer Prize-winning professor Paul Muldoon, Princeton's Howard G.B. Clark '21 University Professor in the Humanities and founding chair of the University Center for the Creative and Performing Arts. The Milberg collection of Irish theater being celebrated by the symposium was donated to the University in Muldoon's honor.

"The role I played has been, quite simply, as a channel for Leonard's enthusiasm," Muldoon said of Milberg's donation. "A lot is often said flippantly about the role of the university in lifelong learning, but Leonard Milberg is the embodiment of the true lifelong learner."

"To further scholarship is an integral part of what motivates me, and what I derive the most gratification from is when I learn that the University has used the material and that students have used the material," Milberg said.

Students in Princeton's Program in Theater and Dance will mount a 99th anniversary production of John Millington Synge's "The Playboy of the Western World" in November in recognition of the Milberg donation.

Also, two publications focusing on the Milberg Irish Theater Collection will accompany the celebrations in October. The first is a catalog of the collection, including biographical sketches of the more than 80 playwrights represented in the collection. The second is a special Irish theater issue of the Princeton University Library Chronicle, including 40 essays on the history of Irish theater by leading playwrights and scholars, such as Muldoon, Friel, Rea, and Edward Albee, as well as the first publication of "The Cooing of Doves."

The symposium is being presented in cooperation with the Program in Theater and Dance, the Friends of the Princeton University Library, the library's Department of Rare Books and Special Collections, the Fund for Irish Studies, the Council of the Humanities and the McCarter Theatre Center.

For more information about the exhibition, symposium and performances, visit the Players & Painted Stage Web site, or call the library at (609) 258-3242. Members of the news media wishing to attend any portion of the symposium, or the performances, must email ccliatt@princeton.edu stating their interest.