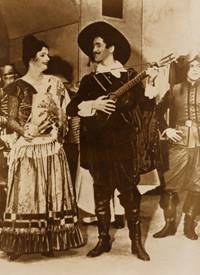 Jimmy Stewart, a member of Princeton's class of 1932, is one of the many famous performers to have appeared on the McCarter stage. Above, Stewart (right) appears as Mr. Alfonso in the Triangle Club's 1931 production of "Spanish Blades," opposite classmate D.S. McMillan as Mrs. Alfonso. A recording of the performance is available on the Seeley Mudd Manuscript Library's Web site. 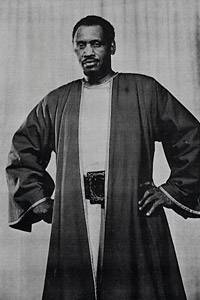 Paul Robeson performed in "Othello" at McCarter in 1942.

At left: Hal Holbrook has starred as Mark Twain in numerous performances since the 1960s.

An exhibition celebrating the 75th anniversary of the McCarter Theatre Center for the Performing Arts will be on display in the main lobby of Firestone Library from Monday, Jan. 31, through Monday, May 2.

"McCarter Theatre: 75 Years in the Spotlight" showcases the rich history of the McCarter Theater, from its origins in 1930 as a playhouse for Princeton University's Triangle Club up through its role today as an independent theater featuring diverse programming.

The exhibition includes photographs, programs, posters and documents showcasing McCarter's history. Among the items are early photographs of McCarter and Triangle productions, an autographed playbill from "Othello" starring Paul Robeson (shown at right), and photographs of Dustin Hoffman in "Three Men on a Horse" and John Lithgow in "Of Mice and Men."

The exhibition emphasizes the dramatic transformations that the theater has undergone since 1930. In addition to serving, then as now, as the venue for Triangle's homegrown productions, McCarter operated as a "booking house," where the premieres of such plays as Thornton Wilder's "Our Town" and George S. Kaufman and Moss Hart's "You Can't Take It With You" faced audiences before moving on to Broadway or national tours.

In the 1960s, under the direction of Milton Lyon and Arthur Lithgow (John's father), McCarter became a "producing" theater, developing original projects in conjunction with the Association of Producing Artists. During this period, future stars such as Hoffman, John Lithgow and Christopher Reeve appeared on McCarter's stage. 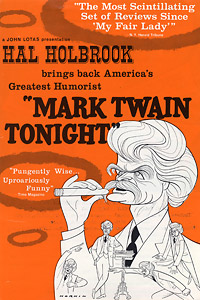 Since 1973, when the theater became independent of the University, its offerings have expanded, and McCarter is now a truly all-around performing arts center. Special programming director William Lockwood, a member of Princeton's class of 1959, has brought an array of music, dance, comedy and special events to the theater. Artists appearing at McCarter have included Ravi Shankar, Alvin Ailey's American Dance Theater, Midori, Andrés Segovia and Penn & Teller. At the same time, the theater continues to develop and offer innovative theatrical productions under artistic director Emily Mann, who joined the organization in 1990. In recognition of its long tradition of excellence, McCarter received the Tony Award for Outstanding Regional Theater in 1994.

McCarter will celebrate its anniversary with a benefit at 8 p.m. Saturday, April 16, hosted by Lily Tomlin. The evening will also feature an original McCarter documentary film narrated by John Lithgow. More information is available on the McCarter Web site.