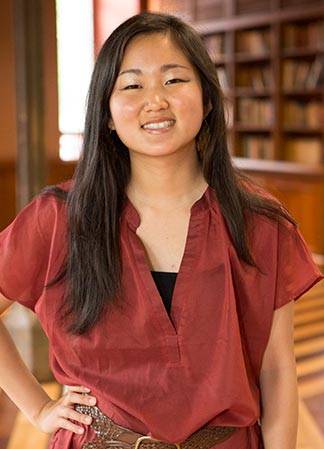 A love of words has shaped Esther Kim's experience as a Princeton student, from writing fiction to teaching English to schoolchildren in Guatemala.

Kim, an English major from Marietta, Georgia, was named salutatorian for the Class of 2016. She will follow the University tradition of delivering a speech in Latin at Commencement on Tuesday, May 31.

Kim has received the Shapiro Prize for Academic Excellence and was selected to Phi Beta Kappa last fall. She received the Ward Mathis Prize for short fiction and the English department's Emily Ebert Junior Prize for her junior independent work. She has worked for The Nassau Literary Review, written for the campus ecumenical Christian journal, Revisions, and performed with the Princeton Chamber Orchestra.

Kim said she was drawn to words as soon as she began reading at age 2. "In second grade I had a notebook where I would write words that I found beautiful or that gave me pleasure, even how they tasted on my tongue or how they looked on a page," she said.

In eighth grade Kim started taking Spanish and Latin. "Every language has its own sort of poetry," she said. She attended the George Walton Comprehensive High School in Marietta.

At Princeton, Kim dove deeper into languages and linguistics. She took advanced Spanish and elementary and intermediate Swahili and courses across cultures, including "Introduction to Augustan Literature," "Introduction to Language and Linguistics," "Spanish Language and Culture Through Cinema," and "Hispanic Studies: Cultural Analysis."

Kim said one of her favorite academic experiences took place in London in fall of her junior year when she took the course "Biblical Hebrew" at University College London, offered through the Department of Hebrew and Jewish Studies. "It was incredible to read excerpts from Genesis in the original Hebrew," she said.

While in London, Kim also took the "Junior Seminar in Critical Writing" with Maria di Battista, the Charles Barnwell Straut Class of 1923 Professor of English and professor of English and comparative literature, who was Kim's adviser on her junior paper. "She has been essential to my academic experience at Princeton," Kim said. "She really encouraged the seeds of my ideas, nudging me to go after my impulses when I found something interesting in a text."

The seminar introduced Kim to modernist literature and led to her senior thesis topic, which focuses on faith and the fantastic in three 20th-century novels: G.K. Chesterton's "The Man Who Was Thursday," Evelyn Waugh's "A Handful of Dust" and Graham Greene's "The Power and the Glory."

Di Battista noted Kim's "quick but never showy critical intelligence, [and] a shrewd understanding of how poems and narratives work and what they can teach us, particularly about the spiritual life."

Deborah Nord, the Woodrow Wilson Professor of Literature and professor of English, served as Kim's thesis adviser and also taught her in the seminar "Major Authors: Dickens, Brontë, Eliot" in fall 2015.

"[Esther] is one of those unusual — and unusually gifted — students who thinks in deep and complicated ways about whatever she reads and has original and keenly insightful things to say as a result," Nord said. "Unassuming and understated in manner, she nonetheless shines and startles when she speaks and writes, whether about the illusory nature of home in Dickens' 'Great Expectations' or the difficulties of writing about faith in post-war Britain."

Discerning the interplay of faith and academics

Kim said that her Christian faith has enabled her to more fully appreciate and experience her time at Princeton. At the end of her freshman year, she became involved with the Alabaster Group, a Christian organization of students and alumni from the Ivy League and the Massachusetts Institute of Technology, which she said "profoundly deepened" her faith.

The sense of freedom she experiences through her faith has helped Kim pursue her love of writing at Princeton, she said. "In my writing, I'm interested in religious faith and how people experience it, what people come across as they search for meaning," Kim said.

While at Princeton, Kim provided English instruction for adults at El Centro, a community center in Trenton, New Jersey. The summer after her freshman year, she taught English in a school in an indigenous community in Sololá, Guatemala, through Manna Project International. In the summer after her sophomore year, she did an administrative internship through Princeton's International Internship Program with CENIT, a nongovernmental education organization in Quito, Ecuador.

These international experiences expanded Kim's "gift for storytelling fueled by her curiosity about other people and their cultures," said di Battista. "Being Esther, she is not only curious about the world, she is determined to make it better, whether by working with the Kaqchikel Mayans in Sololá or Latinos in Trenton or telling stories that make people feel less alone in their lives."

To deepen her writing experience, Kim took two introductory fiction seminars in the Program in Creative Writing and now is in the advanced fiction seminar taught by Jhumpa Lahiri, a professor of creative writing in the Lewis Center for the Arts and a Pulitzer Prize winner who was awarded the 2014 National Humanities Medal by President Barack Obama.

Calling the seminar "the best way to end my experience at Princeton," Kim said the key advice she has learned from Lahiri is that the most powerful writing "comes from that place of digging deep into the personal experiences that you've had … even if the result is something completely transformed."