From her earliest years, Jhumpa Lahiri has nurtured an intimate relationship with multiple languages while navigating between those languages.

The Pulitzer Prize-winning author and current director of Princeton University’s Program in Creative Writing, Lahiri was born in London and raised in Rhode Island, first speaking her parents’ language, Bengali. She learned English as she grew, initially by watching children’s television shows like Sesame Street and the Electric Company. 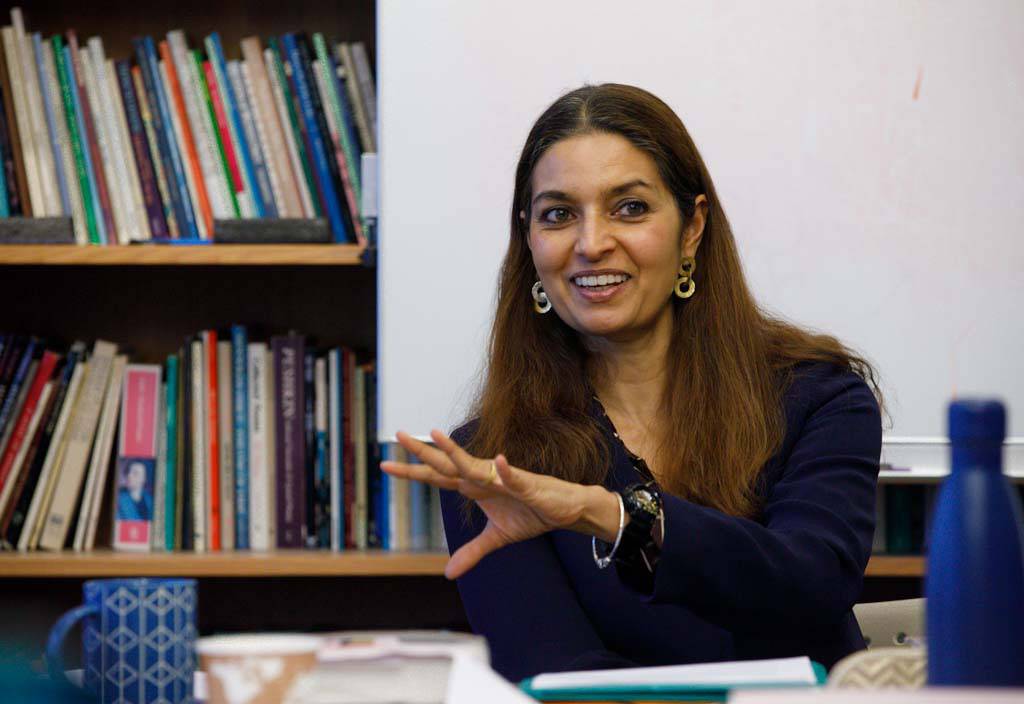 Jhumpa Lahiri, director of Princeton University’s Program in Creative Writing, leads her spring 2020 course, “Advanced Fiction: Imitating Italians,” prior to the COVID-19 pandemic. The course relied heavily on translated texts and considered the limitations of translation.

Feeling foreign in both languages, Lahiri fell in love with Italian during a trip to Florence after college and immersed herself in a third tongue in spite of the struggles of acquiring a new language as an adult.

Translation — that movement between languages, cultures, and ultimately, meaning — has been a fact of Lahiri’s entire life. As a writer, Lahiri said she finds the act of translating to be “extraordinarily powerful and regenerative.” It’s an experience she has shared with her students at Princeton since joining the faculty in 2015.

Lahiri won the Pulitzer Prize in 2000 for “Interpreter of Maladies,” her debut short story collection. Her subsequent works include “The Namesake,” “Unaccustomed Earth” and “The Lowland,” a finalist for both the Man Booker Prize and the National Book Award in fiction. In addition to numerous awards and fellowships, she received a 2014 National Humanities Medal.

Lahiri chronicled her journey learning Italian in a 2015 collection of essays, “In altre parole” (“In Other Words”), and she continues to write and translate almost exclusively in Italian. Her first novel in nearly a decade, “Whereabouts,” was originally written and published in Italian under the title “Dove mi trovo” and will be released in Lahiri’s own translation in May 2021.

She also plans to publish in spring 2021 a book of Italian poems titled “Il quaderno di Nerina,” which she has not yet translated into English.

Among her Princeton students, Lahiri sees similarities to her own linguistic explorations.

“It’s rare to have a Princeton student who has only one language,” Lahiri said. “And many of them come from different international backgrounds, so they have a number of languages at their disposal.”

This fall, Lahiri is teaching an introductory fiction workshop focusing on the diary, and she is co-teaching “Interdisciplinary Studies in the Humanities: Ancient Plots, Modern Twists” with Yelena Baraz, the Kennedy Foundation Professor of Latin Language and Literature and professor of classics. The reading lists of both courses feature several works in translation.

“The thing about translation that is so true, but also so bewildering, is that there is no definitive translation,” Lahiri said. “Works demand translation and retranslation over time. And even in any one given moment you can have 10 or 20 or 200 perfectly reasonable translations because translation is also an act of interpretation. It insists on and perpetuates a plurality of visions.”

Jimin Kang, a concentrator in Spanish and Portuguese (who grew up at home with Korean and who also speaks some Chinese), said she took Lahiri’s course to learn to translate works by a Brazilian writer. Kang spent a year in Bahia, Brazil, as part of Princeton’s Novogratz Bridge Year Program.

“I am taken aback by the care with which Professor Lahiri considers our use of words,” she said. “In our final in-person class [before the COVID-19 pandemic], where we studied one of Virgil's poems from ‘The Georgics,’ she implored us to consider words as resembling a swarm of bees: not as one entity, but as many dynamic things. I've found myself thinking deeply about why we choose certain words in lieu of others, which I've been practicing not just in my translations but in my own writing, too.”

Kang said she views translation as a form of service: to take words that move us deeply and then to try and recreate those feelings for someone who might not be able to access the original.

“It's a practice in empathy, of conveying emotion, of balancing your own self-interests (in terms of creative decisions) with fairness and faithfulness towards the writer who came before you,” Kang said. “Being a mediator in this way is incredibly humbling, and this act of being humbled, I think, is really important for students to have as part of their education.”

Marc Schorin, a concentrator in French, said reading multiple translations of Ovid’s “Metamorphoses” in Lahiri’s “Imitating Italians” class highlighted the course’s theme of how great writers can be imitated. It also begged a critical examination of the original writing and the techniques used in translation.

“Learning about how other writers have done that — and have always done that — gives us a sense of how to move forward in our own assignments (and life, in general),” Schorin said. “As I read in French, I'm always thinking about Professor Lahiri’s class, and how I want to use [Gustave] Flaubert, for instance, to inform what I want to do, or understanding how other writers have learned from him. English is my primary language, so it’s very important for me to learn French literary history from scratch — to understand what is or isn't a cliché, etc.”

David Bellos, the Meredith Howland Pyne Professor of French Literature and professor of French and Italian and comparative literature, said Lahiri’s personal and professional explorations of languages are “a wonderful beacon” for her students and others engaged in translation at Princeton.

“At last we have a distinguished English language writer who knows what translation is — there aren’t very many,” Bellos said. “I’m glad we have someone like Jhumpa for whom translation is one of the arts of writing.”

Bellos said understanding the uses and limitations of works in translation — if not the practice of translation, itself — is essential to all scholarship. Translations are relevant across all academic fields from languages, literature and history to politics, science and math.

Bellos said Lahiri’s potential as a champion of translation at Princeton is “for waking up the community to the potential of learning other languages, acquiring another culture, and of acquiring the ability to move between them and to become a fuller and more multifaceted person through the skills you acquire. [She brings] more recognition not for the foreignness within us, but the foreignness we can acquire.”

Beyond the Program in Creative Writing and individual courses in comparative literature and various languages, Princeton undergraduates seeking to pursue further translation studies can earn a certificate in translation and intercultural communication through the Princeton Institute for International and Regional Studies (PIIRS).

Lahiri has suggested the possibility of having a translation workshop become a requirement for obtaining a certificate in creative writing.

“For someone who writes, there is no better way to learn how to write than to translate, in my opinion,” Lahiri said. “It’s only by stepping outside the language you take for granted — the language you can express yourself in without thinking — that you can really learn to work in any language. So I really want to build on what is already here in terms of translation.”

Lahiri will discuss issues of translation in Aristotle’s “Poetics” as part of the Humanities Council’s 14th annual Humanities Colloquium, “Things As They Should Be? A Question for the Humanities,” which will be held as a webinar from 4:30 to 6 p.m., Wednesday, Sept. 9. Her talk is titled “Not should but might: notes of a would-be translator.” Advance registration is required. More information can be found on the Humanities Council website.