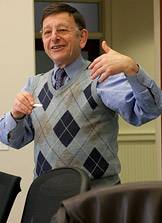 David Bellos has spent his life working with words, often in languages other than his native English. A professor in the departments of French and Italian and comparative literature at Princeton, he is a translator of international renown whose new book, "Is That a Fish in Your Ear?" explores how people understand each other — or not — in various situations and settings.

As a dedicated wordsmith, Princeton University professor David Bellos mines examples of the interplay of languages from all kinds of sources, even Oscar-winning films.

Bellos, who has spent his life working with words, often in languages other than his native English, is a professor in the departments of French and Italian and comparative literature — as well as a translator of international renown who has written a new book on translation. In his teaching and writing, he often reaches for examples of linguistic complications, emphasizing his crucial point that translations never produce quite the same phrasing, feeling or meaning as the original.

A recent session of his senior seminar in translation, for instance, explored the uses and effects of multiple languages in the hit 2008 British film "Slumdog Millionaire," which Bellos had selected as an especially appropriate case study of both the tricky nature of interpreting between languages and the different ways subtitles can be used. A central narrative element of the film is an Indian version, performed in Hindi, of the U.K. and U.S. television game show, "Who Wants to Be a Millionaire?"

In preparation for the class, six students had watched different versions of "Slumdog," including the U.S. release in English, with a great deal of unsubtitled Hindi dialogue; the French version, with dubbed French over the English voices and no subtitles; and a Spanish-language version with full subtitles for dialogue, plus captions over English signage and other graphic elements.

"Every character in the French version sounds like Voltaire," Bellos chuckled. "It's the most beautiful thing you've ever heard. No rough edges. In some ways, I imagine, it probably takes away some of the film's fun." 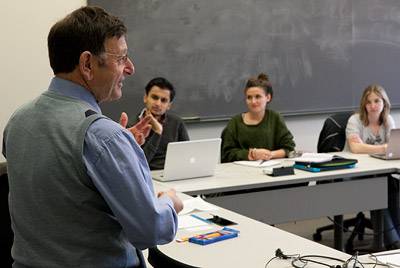 When teaching his senior seminar on translation, Bellos often reaches for examples of linguistic complications, underscoring his crucial point that translations never produce quite the same meaning as the original. In a recent class, undergraduates Ankit Panda (from left), Alya Forster and Samantha Hantman delved into a discussion of translation regarding the Oscar-winning film "Slumdog Millionaire." (Photo by Denise Applewhite)

Ankit Panda, a concentrator in the Woodrow Wilson School of Public and International Affairs who is from Bhubaneswar, India, nodded.

"It's also weird," Panda said, "that the original name of the TV show in Hindi is 'Kaun Banega Crorepati' and the film's translated name is 'Slumdog Crorepati,' because 'crorepati' is actually 10 million [in rupees] so the translation would be '10-Millionaire'" — or about $190,000 in U.S. currency.

"Come on," he beckoned to Panda, scribbling furiously on the blackboard. "This is where I should have begun. The movie title itself is already a translation of a game show exported from the U.S., which actually originated in the U.K. It's different already."

Bellos' intellectual reach and versatility is clear to his students.

"Though his classes are structured, they are also somewhat free-form, and the digressions he takes are incredibly well informed and intellectually interesting," said Alya Forster, a senior from Chicago concentrating in French who has taken three of Bellos' courses.

"He loves literature as much as anyone, and yet he also teaches us about the practical aspects of translation in the real world. There's never anything dry or purely theoretical about what he is saying." 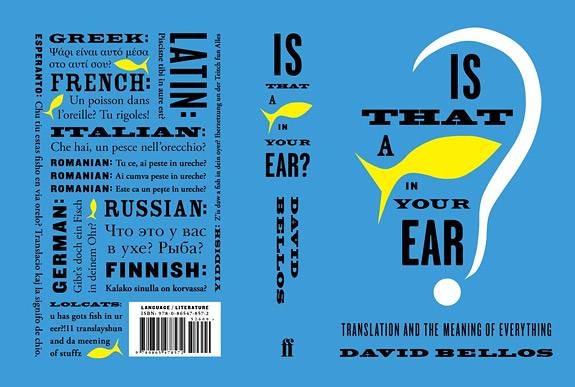 First published in English in the fall, "Is That a Fish in Your Ear? Translation and the Meaning of Everything" highlights translators' importance in sensitive fields such as international security, scientific research, law enforcement and computer engineering. In the book, Bellos emphasizes that translation is both an art and a science. (Image courtesy of David Bellos)

Deepening the understanding of translation

It is this vital connection with his work and love of language that enlivens Bellos' classes, and that he brings to his own writing, both for academic and for broader audiences.

Bellos joined the Princeton faculty in 1997 and, in 2007, became director of the University's newly created undergraduate certificate Program in Translation and Intercultural Communication.

The program was created to educate students about the important role that translation plays across academic fields and in cultural understanding. Since its founding, 13 students have completed certificates in the program. 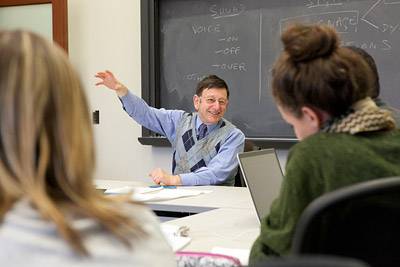 Bellos directs the University's undergraduate certificate Program in Translation and Intercultural Communication that was created in 2007 to educate students about the important role that translation plays across academic fields and in cultural understanding. He frequently points out, both in his latest book and in the classroom, that a great deal of popular culture in English actually has its foundation in another language. (Photo by Denise Applewhite)

"David has sparked a good deal of student and faculty interest in the field," said Sandra Bermann, the Cotsen Professor of the Humanities and a professor of comparative literature at Princeton. "Translation is not only for literature majors; it's gaining importance in the social sciences, the sciences and engineering, as well as in the humanities. Even students at Princeton who have no particular literary interests take courses in the certificate program, and David has done a superb job getting that program off the ground."

In conjunction with the program, Bellos developed and moderates an informal weekly luncheon series of talks on recent scholarly research related to translation. Presentations range across topics such as sources for the Bible, the languages used to write computer programs, Esperanto and literature from various languages, bringing together a broad cross-section of students, faculty and others.

"Professor Bellos is the reason I am doing a translation certificate," said Kerry Brodie, a senior from Potomac, Md., who is concentrating in Near Eastern studies. "He has been one of the most influential professors in my Princeton experience. It's so exciting to be able to study translation in such a unique way."

She added, "He also makes sure we each feel appreciated and interesting. I wrote a paper two years ago that Professor Bellos not only remembered later, but subsequently asked me to present in his translation lunch series." 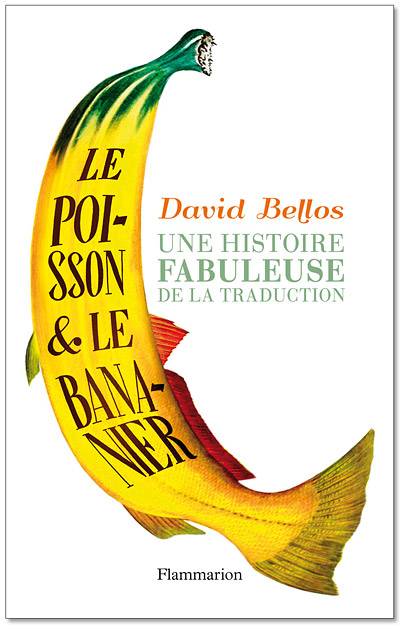 Published in January, the title of the French adaptation of Bellos' book is "The Fish and the Banana Tree: A Legendary Story of Translation." (Image courtesy of David Bellos)

Bellos draws from material gathered throughout his scholarship and teaching in his latest book, "Is That a Fish in Your Ear? Translation and the Meaning of Everything," in which he explores how people understand each other — or not — in various situations and settings.

Published this fall by Faber and Faber in the United States, with a French adaptation out in January by Flammarion, the book is intended for a general audience. It highlights translators' importance in sensitive fields such as international security, scientific research, law enforcement and computer engineering. To do so, Bellos charts the complex, fragile beehive of translators who keep the United Nations operating; explores the mental state involved in translating into and out of one's native tongue; and delves into online translation — technology that actually dates back to Cold War-era efforts by the United States to quickly unscramble Russian — among other topics.

Bellos also frequently points out, both in the book and in the classroom, that a great deal of popular culture in English actually has its foundation in another language. Using the example of French, he points to Pierre Boulle's novel "Planet of the Apes," Alexandre Dumas' "The Three Musketeers" and the countless variations on the Victor Hugo novel "Les Misérables" that have crept into English-language culture through film, television, fiction, drama and pop music.

"I often wonder if this notion doesn't function as a way of holding foreignness away from one at arm's length, of protecting oneself from what is not familiar by not taking things that are not in English as seriously as those that are in English," he added.

Bellos has been thinking about such distinctions since he was a schoolboy. Growing up in Southend-on-Sea, England, he was taught French, German, Latin and Russian between the ages of 11 and 17.

"I suppose learning languages was a way out from the boredom of a small town, for me," he said.

Bellos was exceptional not only at learning languages but also at translating between them.

After earning a doctorate in French literature from the University of Oxford, he taught at the universities of Edinburgh, Southampton and Manchester. He also translated novels and took on the occasional interpreting job — and picked up significant prizes and plaudits along the way.

In 2005, Bellos won the inaugural Man Booker International Prize for Translation for his translations of four of the novels by the Albanian writer Ismail Kadaré from French into English. In 1994, after having translated into English works by modern French writer Georges Perec, he was awarded the Prix Goncourt de la Biographie for his literary biography on him, "Georges Perec: A Life in Words." In 1988, the French government bestowed on him the rank of Chevalier dans l'Ordre des Palmes Académiques, for support and advocacy of French arts and language.

Bellos is also the author of biographies of the French filmmaker Jacques Tati and the French novelist and diplomat Romain Gary.

Bellos' engagement with language and translation issues increasingly has moved into the public forum, such as through writing op-eds for high-profile newspapers.

In the U.K.-based paper The Guardian, he took on the thorny issue of "tu" — the French casual form of "you" — versus the more formal "vous." In The New York Times, he recounted a brief history of computer-assisted and online translation before considering both the technology's usefulness and shortcomings, with a focus on Google Translate.

And in The Wall Street Journal, Bellos reflected on the difficulties prosecutors face when translating little-used languages — highlighted during the recent arrest and subsequent release in New York City of Dominique Strauss-Kahn, the former managing director of the International Monetary Fund, on the basis of testimony translated from a Guinean dialect of the Fulani language.

Of Google Translate, Bellos wrote that while the automatic translation technology is effective in translating routine utterances, it is inadequate to address truly original work, and therefore could not be used for literary translations.

Of prosecutors in the Strauss-Kahn case, he was critical of attorneys and prosecutors bickering over whether a disputed phone call translation might have been accurate or unfaithful.

"How would they even know if it was good or bad?" asked Bellos. "They're listening to a tape of a translator, who is not even a full-time translator, who was probably pulled out of his or her day job to do it, working under great duress and time pressure, who may or may not have made an accurate translation.

Such examples reinforce one of Bellos' key points about translation — that it is not a mathematical equation, but rather an art and a science. He believes a sentence is unlikely to be translated the same way by two different people working in the same language, and not even when translated by the same person a second time.

In the end, Bellos stresses, one must put faith in a translation.

"You have no alternative, other than learning the language in question, than to trust the translator," he said. "A text and its translation are two different objects, and they always will be. So we must grant the translator authority in a language we do not know. We don't like to do that. But we have to come to terms with it."