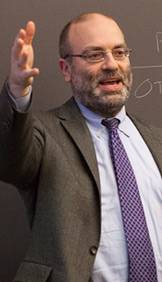 Princeton professor Michael Gordin says he was drawn to study the history of science because of what it can teach scientists and nonscientists alike. His current research project focuses on the languages used by scientists and the rise of English as the dominant language for scientific publication.

Professor Michael Gordin illuminates the history of science and language by exploring the overlooked, the misunderstood and the unusual.

By meticulously reconstructing the five days between the dropping of the second atomic bomb and the surrender of Japan in 1945, the Princeton University professor of history challenged the conventional narrative that America's military, scientific and government leaders were certain the bombings of Hiroshima and Nagasaki would bring a quick end to World War II.

Building on the archives of Immanuel Velikovsky in the University library, Gordin offered new insights into what defines science and how the scientific community reacts when challenged by someone who argued that Venus was ejected from Jupiter and displaced Mars in the solar system.

And in the classroom this spring, he pushed undergraduates to gain a new appreciation and understanding for language by focusing on what some might not think of as languages at all — including the waggles of bees, computer languages, the attempt at a global language called Esperanto and even the Klingon tongue devised for use in the Star Trek movies.

In the spring semester, Gordin co-taught a class on constructed languages with classics professor Joshua Katz.

William Jordan, the Dayton-Stockton Professor of History and chair of the history department, said he enjoys watching Gordin overturn "the 'stultifying orthodoxies,' as they have sometimes been called, which we often — and at our peril as historians — take for granted."

"As a teacher [Gordin] is so dynamic that he exudes excitement for his subject, and he is a formidable researcher with quite astonishing mastery not only of the subject matter that is of his direct interest, but of subjects that lie on the periphery as well," Jordan said.

Gordin joined the Princeton faculty in 2003 after earning his bachelor's degree and Ph.D. from Harvard University. In 2011, he received both the Graduate Mentoring Award for his work with graduate students and a John Simon Guggenheim Foundation fellowship. He has been named the Rosengarten Professor of Modern and Contemporary History, effective July 1.

Gordin is also director of the Fung Global Fellows Program, which brings exceptional international early-career faculty members working in the social sciences and the humanities to Princeton for a year of research, writing and collaboration. Next year's fellows will focus on the theme of "Languages and Authority."

Gordin is the author or co-author of five books. In addition to writing about the atomic bomb, he has tackled the Cold War as well as the story of Dmitrii Mendeleev, a Russian scientist who is credited with developing the periodic table of elements. Gordin's most recent book, "The Pseudoscience Wars: Immanuel Velikovsky and the Birth of the Modern Fringe," was published in 2012.

Gordin said he was drawn to study the history of science because of what it can teach scientists and nonscientists.

"One of the goals of the history of science is to teach young scientists that the things you are certain of now may not be true later and you need to understand and be critically aware of your concepts," Gordin said. "When are you digging in your heels too much?

"And it's easy for humanists to walk through the world and say they don't want to think about science. But we live in a world saturated with science, technology, medicine — that's part of our world and part of our culture and you should know something about it. It's just part of what it means to be educated, but it also gives you tools for science literacy. It gives you tools for the world you live in." 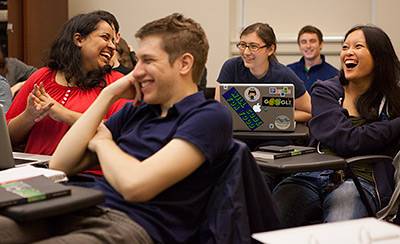 In the classroom, Gordin is engaging, compelling and, quite often, funny, students and colleagues say.

Eleanor (Nora) Taranto, a 2013 graduate from Bethesda, Md., who concentrated in history, took the class "Technology and Society" with Gordin during her sophomore year.

"The class put me on this track that I love, in thinking about how the societal, religious and historical contexts in which technological innovations were made," said Taranto, who plans to attend medical school. "Professor Gordin is just a great lecturer and shows that he knows everything there is to know about these things and is really enthusiastic."

Gordin also served as Taranto's adviser for her senior thesis, which focused on French botanist Alexis Millardet, who developed the first fungicide to treat downy mildew on grape vines.

"Obviously Professor Gordin is a historian of science but there wasn't all that much overlap between what I was writing about and what he specializes in, but I think he was pretty much the best adviser I could have had," Taranto said.

Gordin said he enjoys advising seniors on theses that focus on topics outside his usual areas of study.

"I'm happy to learn new things," Gordin said. "I know how I would go about trying to learn about a new topic, so we could talk about how Nora was going to get more sources, how she would find things out. Then she's the expert in that. She's the one who controls the information. I learn from her in the process and if she's not persuading me or explaining things to me then it's her job to do so." 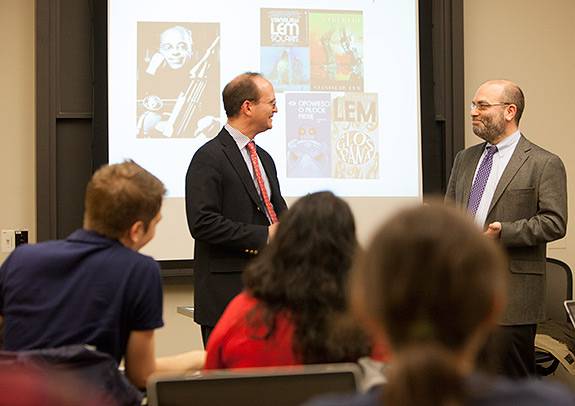 Gordin and Katz keep up a friendly repartee throughout their class. "We were just having so much fun up there bantering with each other and correcting each other, arguing sometimes," Katz said.

In the classroom, students say Gordin is engaging, compelling and, quite often, funny. He co-taught the course "Imagined Languages" this spring with Joshua Katz, a professor of classics. Throughout the class, both tied together a diverse set of constructed languages with the historical and cultural contexts in which they were created. The class was rigorous academically, but the mood was light.

"We were just having so much fun up there bantering with each other and correcting each other, arguing sometimes," Katz said. "The students seemed to love it. I'd say something and Michael would object and we'd get in a little fight. The students could see we were really enjoying it."

And Gordin occasionally drew laughs from surprised students by finding relevant examples in unexpected places, such as the Germanic influence on an alien language, Kobaïan, developed and used by the 1970s French progressive rock band Magma.

"Both Professor Gordin and Professor Katz are incredibly knowledgeable and great professors on their own, but the dynamic when the two of them taught together was incredible," said rising sophomore Saahil Madge. "They placed the people and ideas within a historical and cultural context, and students could then see how and why the material that we covered was so influential. I really enjoyed the class and learned a lot, not just about language and linguistics but also about history, computer science, math and even psychology."

During one class session, focused on constructed languages in literature, Gordin peppered the class with seemingly simple questions that showed the challenge of the topic: "What language is this written in?" "Why do you think it's written in English?" "Why did the author write something that was so hard for two-thirds of you to understand?"

"In fiction, language can be a game, or a set of rules the author is playing with," Gordin said. "It may look like they're writing this in English, but they're really writing it in a modified version of language to make a point."

Take the word "horrorshow" in the novel "A Clockwork Orange," Gordin said. It has an obvious meaning in English but is also a play on a Russian word — "khorosho" — that means "good." In the novel, it serves as a perfect bit of wordplay to describe the beatings a gang known as "droogs" delivers to innocent strangers for sport.

The mingling of English and Russian is no problem for Gordin, who puts the number of languages he knows at between four and nine.

Language is also the focus of Gordin's current research project, which looks at the different languages used in science scholarship through time and the rise to dominance of English over the past century. About 99 percent of scientific publication worldwide today is done in English, he said.

"This is to my mind the single most important transformation that has happened in the history of modern science and there is no history of it — the anglification of the entire knowledge-making infrastructure," Gordin told history department colleagues during a recent talk on the project.

And, Gordin says, that has significance both for English speakers and those who don't speak English.

"The world is now structured in a way that favors people who speak English," Gordin said. "But you should notice that and that it helps you in some ways and disadvantages others. And, it's almost certainly not permanent."

Gordin, who took an undergraduate Latin course last year to prepare for the language project, hopes to complete a draft of a book on the topic this summer. Next fall, he will teach a seminar on another of his many interests, Albert Einstein.

"I don't know of anybody of our generation in the University who can do the range of things that he can do," Katz said. "Michael is brilliant but he's also very warm. He's serious but he's also very charming. You don't often find that combination and it makes him very special."