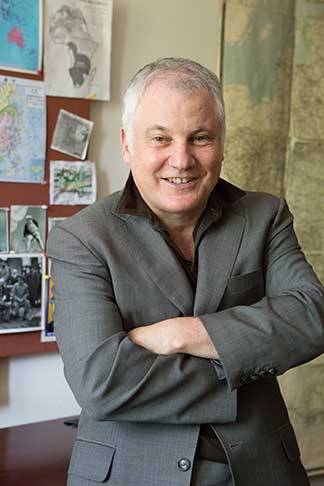 Princeton historian Stephen Kotkin has spent decades researching and teaching about Soviet and Russian history, with a particular focus on Josef Stalin. He is distilling those efforts — and large amounts of once-secret files now open to researchers — in an extensive, three-part biography of Stalin. "It's the grand sweep of history in which, I hope, Stalin's contribution becomes much clearer and he becomes much more accessible because of all these new source materials that I have tried to synthesize," Kotkin said.

The first course historian Stephen Kotkin taught as a member of Princeton's faculty, "Seminar in the History of Soviet Russia," met for the first time 26 years ago, on Thursday, Sept. 21, 1989.

According to the University's course listing, the seminar focused on the "birth of a new society in the throes of revolution" and included a "special focus on the Stalin period," a particular interest of the newly minted assistant professor, who had earned his Ph.D. from the University of California-Berkeley in 1988 and spent the first half of 1989 in the Soviet Union as part of a research exchange.

Fifty-one days after that first class session, on Nov. 9, the Berlin Wall fell, ushering in a period of dramatic political and economic change across the Communist bloc. One result of those changes: researchers such as Kotkin would eventually gain unprecedented access to the archives that tell the inside story of Soviet history, including the Bolshevik Revolution, the rise of Josef Stalin and his three decades in power.

Such insights continually reshape the current version of that first course he inherited, which he transformed into "The Soviet Empire," as well as a range of other courses Kotkin has taught for undergraduate and graduate students. The flood of materials that became available in the late 1990s and early 2000s — including the archives of the Communist Party, the secret police and Stalin himself — also prompted Kotkin to wonder if it might, for the first time, be possible to write a comprehensive account of the dictator and his place in history from deep inside the regime.

"Could you write a total history of the whole Stalin phenomenon — foreign policy, the planned economy, the domestic monopoly of Communist power, the culture, all the things Stalin was involved in?" Kotkin said. "Imagine Hollywood, Washington and New York all rolled into one — and into one person. That's a colossal subject and irresistible in my view. The question was whether it could be done on the basis of exhaustive firsthand evidence."

Last fall, after more than a decade of work, Kotkin, the John P. Birkelund '52 Professor in History and International Affairs, began to answer that question with the publication of "Stalin, vol. 1: Paradoxes of Power," the first part of his extensive, three-volume Stalin biography. Stalin's birth is noted, of course, but the first volume opens by focusing on the confluence of world events that set the stage for Stalin's rise.

"It's the grand sweep of history in which, I hope, Stalin's contribution becomes much clearer and he becomes much more accessible because of all these new source materials that I have tried to synthesize," Kotkin said. "We have the person and the personality. We have his ideas. We have the institutions. We have the geopolitics."

William Jordan, the Dayton-Stockton Professor of History and Kotkin's colleague for more than two decades, said the Stalin biography reflects Kotkin's expertise as a researcher and his range as a writer.

"His biography of Stalin really is emerging not just as a biography of Stalin but as a biography of the Soviet Union in which Stalin's career and life are the thread that holds the narrative together," said Jordan, who is chair of the Department of History. "He's just got a very, very big historical vision but he can also focus in on what I would call the telling anecdote and just break it open. A person who reads his work sees the historical picture in much sharper focus thanks to his work." 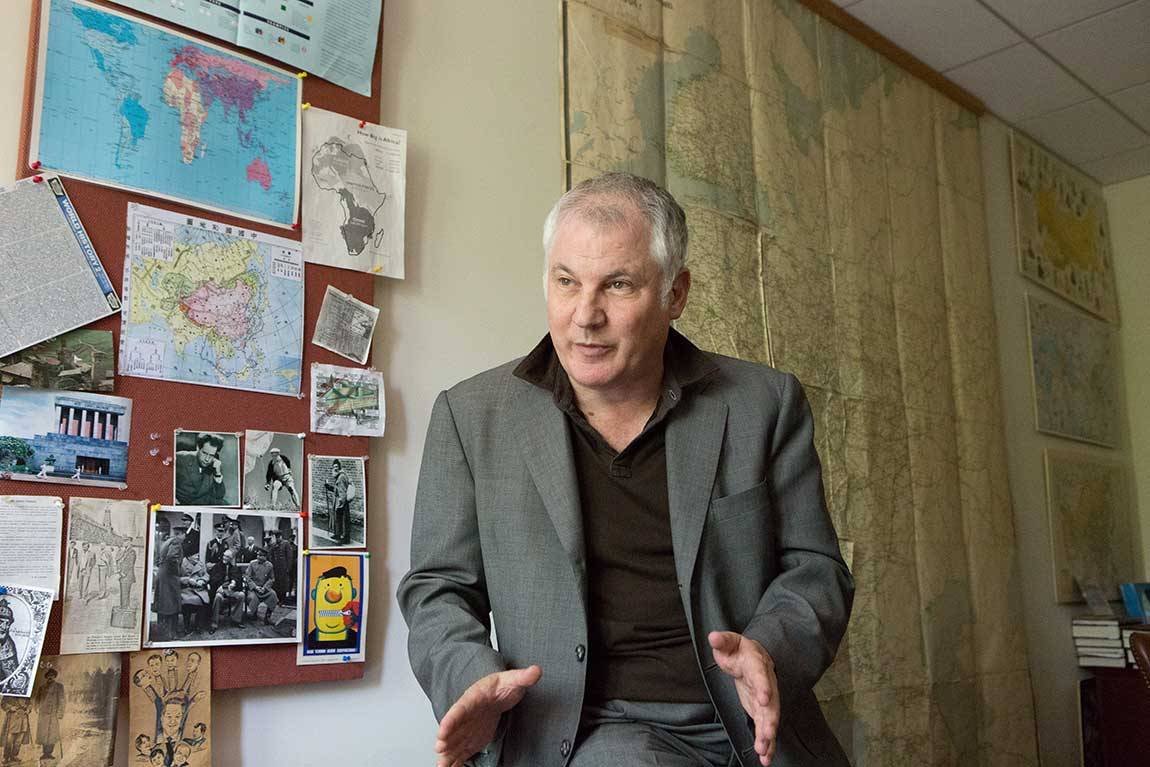 Kotkin turned his focus to the Soviet Union and Stalin during his third year as a graduate student. When he went to the Soviet Union in 1986 to research his dissertation, Mikhail Gorbachev was already beginning the political reforms known as perestroika.

Zooming in on Stalin

After earning his undergraduate degree from the University of Rochester, Kotkin studied the history of France and the Habsburg dynasty at UC-Berkeley — before a conversation with French philosopher Michel Foucault set him on a new course. Kotkin said Foucault suggested that someone should apply his ideas, which focused on the relationship between power and knowledge, to Stalin.

So in his third year at Berkeley, Kotkin found himself beginning anew, starting with the Russian alphabet. He traveled to the Soviet Union for a language program in 1984 as Soviet leader Konstantin Chernenko neared death from emphysema. When Kotkin returned to the Soviet Union to research his dissertation in the fall of 1986, Mikhail Gorbachev was already beginning the political reforms known as perestroika.

"Gorbachev's opening was a lucky piece of timing on my part," Kotkin said. "While it was still early, there were a lot more possibilities for researchers than there had been. A lot of circumstances came together for me in a way that no one could have foreseen. I certainly didn't."

"What I did have the foresight to do was to plan a case study of a provincial Soviet city, Magnitogorsk, that the Stalin regime had used as a case study," Kotkin said.

Based on research from his 1986-87 and 1989 stays in the Soviet Union, Kotkin wrote two books that focus on the industrial city, previously forbidden to visitors. "Steeltown USSR: Soviet Society in the Gorbachev Era" examines the changes of the Gorbachev era through the experiences of the city and its residents, while "Magnetic Mountain: Stalinism as Civilization" explores Stalinism as it was experienced at the street level. Befitting the impact of the fall of the Berlin Wall during his first course at Princeton, Kotkin has also written "Armageddon Averted: the Soviet Collapse" and "Uncivil Society: 1989 and the Implosion of the Communist Establishment."

"I think he's one of the leading historians of the Soviet Union in this country and indeed the world," Jordan said. 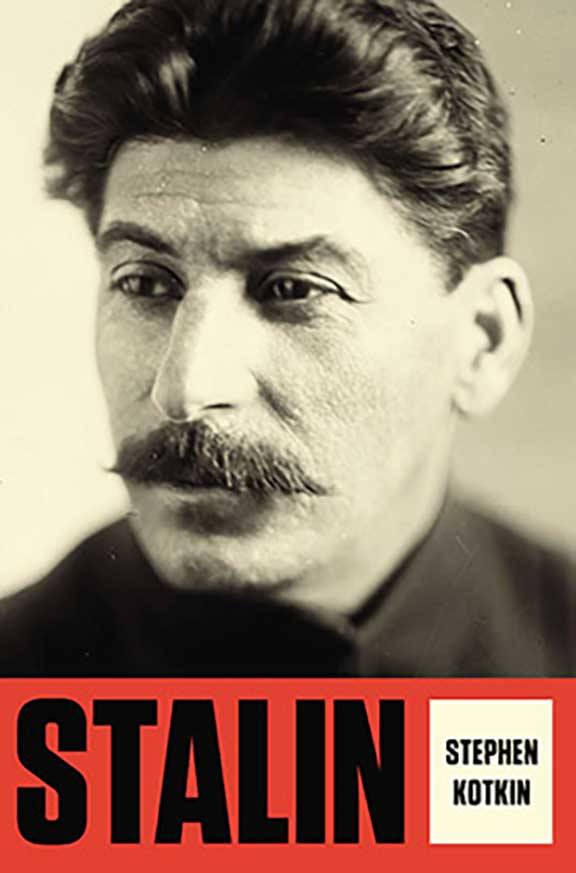 The first volume of Kotkin's three-part biography of Stalin was published in 2014. Altogether the books will comprise about 1.5 million words on Stalin and Russian power in the world. (Image courtesy of Penguin Press)

Kotkin shares his knowledge, analysis, techniques and frequently his humor with his students.

"His class made the political drama of the past come alive so vividly," Leifer said. "The class was full of incredible primary sources, and it was a privilege to be introduced to a way of looking and understanding original documents."

"They gave you the framework and big ideas for the topic or time period at hand and were supplemented by rich detail," said Moran, who is a history major. "Professor Kotkin's own accounts of his exploration of Gulag and state archives after the Russian state opened them in the 1990s added great color to his narrative."

Kotkin, who is acting director of the Program in Russian, East European and Eurasian Studies, also teaches undergraduate courses on global history since the 1850s and modern authoritarianism.

"I'm teaching undergraduates analysis of global politics," Kotkin said. "The subject matter I teach is a means to a deeper understanding of how the world works."

Inside the black box

This year, Kotkin advised the senior thesis of April Jeon, who is majoring in the Woodrow Wilson School of Public and International Affairs. Jeon said Kotkin has been extremely supportive of her work on North Korean behavior and diplomatic strategy toward the United States and South Korea.

"One of the most difficult parts about writing a thesis on North Korean foreign policy is that you are writing from an outside perspective about basically a sealed black box," Jeon said. "Professor Kotkin helped me through the frustration and panic I felt when I initially figured out the daunting situation I had put myself in by pointing out that it's natural to not know some parts and that it's OK to admit that you just won't know the answers to what exactly happened. He pointed out that what is important is to make an educated and intelligent speculation or observation and move around obstacles when necessary." 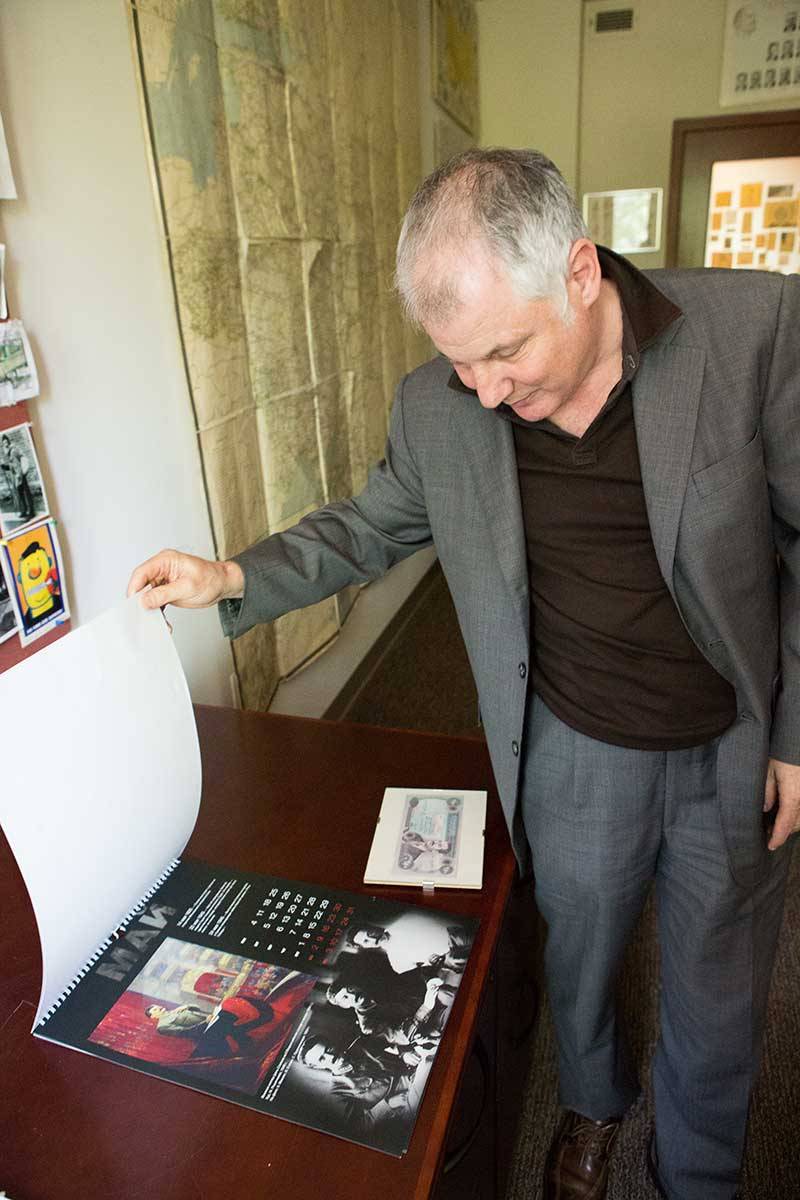 Kotkin purchased a 2015 calendar featuring images of Stalin during a trip to Russia last year. The retouched images in the calendar contrast with the stark image of Stalin used on the cover of his book.

Jeon said that advice allowed her to focus on making insightful observations, rather than seeking elusive answers.

"I think he really understands the fears and confusion an undergraduate feels when trying to put together a one-year's work in an 80-page independent project," she said.

Kotkin said he encourages students writing their senior theses to use the same approach he does when conducting — and writing about — large amounts of research. He calls it "writing from the inside," urging students to begin writing once they have some good material and not waiting until all their research is complete.

"Starting with the material they feel confident about and just breaking the ice on the writing helps them to manage it so it's not as intimidating, it's not overwhelming," Kotkin said. "When they open their laptop, there's a file they can call up rather than a blank screen. It's very important that they gain confidence and momentum. They can rewrite as they add more research."

As an adviser, Kotkin said it's most important to understand what a student wants to study and help them reach their goal.

Stalin biography a work in progress

Kotkin's Stalin biography is still in progress. (He is also working on two other books.) The recently released first volume, which was a finalist for the Pulitzer Prize, covers the period from Stalin's birth in 1878 through his rise to power and ends with his decision in 1928 to collectivize Soviet agriculture — what Kotkin calls the "core crime" of the Bolshevik regime.

The second volume, which Kotkin drafted concurrently with the first and will be released in a few years, covers the period from 1929 to 1941. Kotkin is still at work on the third volume, which takes up the Second World War and Cold War and continues beyond Stalin's death in 1953 to address his legacy. By the time he finishes, Kotkin expects the books will comprise roughly 1.5 million words on Stalin and Russian power in the world, a length befitting the importance of his subject.

"You have three decades as a dictator in the largest country in the history of the world," Kotkin said. "Besides Mao and Hitler, I'm not sure who else you mention in the same category as Stalin. I don't know a bigger subject."