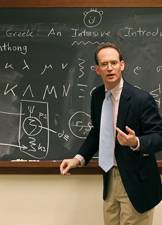 Joshua Katz is known for his inventive and dynamic approach to teaching. “Fundamentally I like what I teach and I like to teach,” he says.

Below left: Katz leads some highly rigorous language classes, including “Ancient Greek: An Intensive Introduction,” which is known as “Turbo Greek” because it covers more than a year’s worth of introduction to the Greek language in one semester. Here, Katz runs students through their high-speed paces in a classroom in East Pyne. This year he also has added “Turbo Latin” to his repertoire.

Associate Professor of Classics Joshua Katz likes to start the first day of class in "Origins and Nature of English Vocabulary" with what he calls his "party trick."

"I ask students to stand up and say a few words, and then I tell them where they're from," said Katz, who is an expert in historical and comparative linguistics. He follows up by revealing one or two of his secrets to deriving hometowns from people's speech. "The students are amazed that it's possible to get all that information from how a person speaks."

The exercise may earn him plaudits, but that's not what he's seeking. He's demonstrating that language is rich in information.

"When you hear someone talk, you come away with all sorts of conclusions even though you don't think about it consciously," Katz said. "I get the students to realize that there are linguistic clues in people's different speech habits and that these differences can lead — often thoughtlessly — to prejudices, which in turn present all sorts of political and social problems. They start to see that their impressions of what it means to be politically conservative or liberal, say, are tied to all sorts of linguistic features, from accent to sentence structure to vocabulary choice." 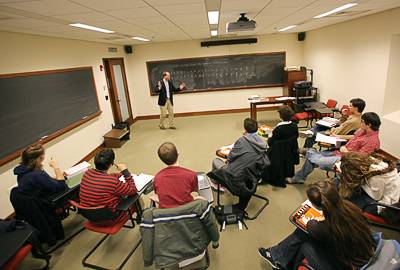 Katz's introductory class is indicative of his qualities as a professor: inventive and dynamic in the classroom, highly accomplished in his scholarship and a whole lot of fun.

Since arriving at Princeton in 1998, Katz has "single-handedly put his academic subject on the map for undergraduates at Princeton," said Denis Feeney, chair of the classics department. "Our department had never offered a range of courses in the tough and demanding field of historical linguistics in the classical area, and now there are people all over who have studied this subject with Joshua."

In his research, Katz is particularly interested in etymology, the study of the origins of words, but his scholarly interests are varied. One day he may be writing about the first century B.C. poet Horace; on another he will take up the origin of the word sphinx.

"My scholarly life is like my office. There's a pile here and a pile there, and all of it is sort of messy," Katz said. "I'm very interested in lots and lots of different things — lots of languages, lots of time periods, lots of ways of speaking about the world — and I'm always interested in more and more things."

Katz is a scholar "with an international standing," said Professor of Classics Andrew Ford. "He gets many invitations to lecture, both in North America and abroad, and he is often the most junior person at invited conferences. He excels in every form of scholarly activity: His presentations are scintillating, his articles appear in leading journals (and with an impressive frequency!) and his many book reviews are a delight — judicious, informative and droll."

Katz knows "dozens and dozens" of languages — he declines to offer a number, saying it's not clear what counts as fluency in a language that no one speaks. Still, he knows Sanskrit, Hittite, Middle Welsh, Old Norse and Egyptian, not to mention Latin, Greek and all of the main modern European languages.

His research centers on the systematic changes in languages, with a focus on the Indo-European family. Though his work on sounds and word elements is often highly technical, it is broad in scope because he explores the cultural changes evidenced in language, said Ford.

"A typical article may begin with the phonology of a by-form for ‘badger tail' in Albanian, but by the end he shows that it is a ‘wandering word' that has found its way into unrelated languages and so documents unsuspected channels of communication across ancient cultures," Ford said. "For classicists, the benefit of this study is profound: It gives a glimpse into the deep pre-history behind our earliest Greek texts; in addition, it allows one to read the ancient languages with much more nuance and discrimination."

Katz has loved languages ever since childhood, when he used to hoard grammars of languages and memorize them, he said. His father, Thomas Katz, is a chemistry professor at Columbia University, so Katz grew up in an academic environment. Initially he came to Princeton to teach one class while finishing his dissertation in linguistics at Harvard. He's been here ever since, despite the fact that Princeton does not have a linguistics department.

"It's unusual to receive all your degrees in one subject and then get a job in a different discipline, but the sorts of things I find interesting don't fit easily into any one American academic department," said Katz, who earned his bachelor's degree from Yale and his master's degree from Oxford, also both in linguistics.

In addition to teaching courses on linguistics, Katz leads some highly rigorous language classes, including "Ancient Greek: An Intensive Introduction," which is known as "Turbo Greek" because it covers more than a year's worth of introduction to the Greek language in one semester. This year he has added "Turbo Latin." He relishes teaching freshman seminars, having taught one on ancient Egypt and another on writing systems of the world.

In the classroom, Katz conveys difficult material with unbounded zeal, even walking on the chalk-ledges in McCosh 28. He was given the President's Award for Distinguished Teaching in 2003.

Senior Emma Shoucair recalled how Katz transfixed the students in "Origins and Nature of English Vocabulary," which has seen an enormous increase in enrollment since Katz began teaching it.

"There were about 100 people in the class, all different majors, and he made it feel like a small seminar," said Shoucair, who met with Katz three times a week last semester to learn Old Irish from him. "He knew every single person's name within the first week, and his enthusiasm for the subject matter was simply infectious. He managed to make even the (according to him) duller lectures funny with his quick-witted banter with the students, a sense of humor he is willing to level at anyone (including himself), and his focus on the material that would be most interesting to us."

Junior Bryan Cockrell added, "He really cares about what we think and how we're reacting to the material.

"After each meeting of our linguistics seminar ended, practically 80 percent of us would line up at the front of the classroom with further questions or comments for him," said Cockrell, who took Katz's freshman seminar on ancient Egypt and a course on historical and comparative linguistics. "I am sure that we all wished the class could go on for another hour."

Katz doesn't spend much energy analyzing his approach to teaching. He just does it.

"Fundamentally I like what I teach and I like to teach," he said. "I don't have scripts. I don't stand behind a lectern. I roam around and call on people. And I like being interrupted. I always build in plenty of time for people to do that and for me and others to respond, and if we go off on a tangent, it makes everything a lot more enjoyable."

He frequently takes the time to help others with their teaching as a participant in Teachers as Scholars, a program that offers seminars to elementary and secondary school teachers through the University's Teacher Preparation Program.

And Katz is deeply engaged with students, serving as the senior fellow and a faculty adviser at Forbes College. He also writes a column for The Daily Princetonian.

One of Katz's most satisfying experiences is working with students who arrive at Princeton with little knowledge of ancient Greece and Rome and end up as classics majors.

"The more the better," said Katz. "I like teaching to crowds."