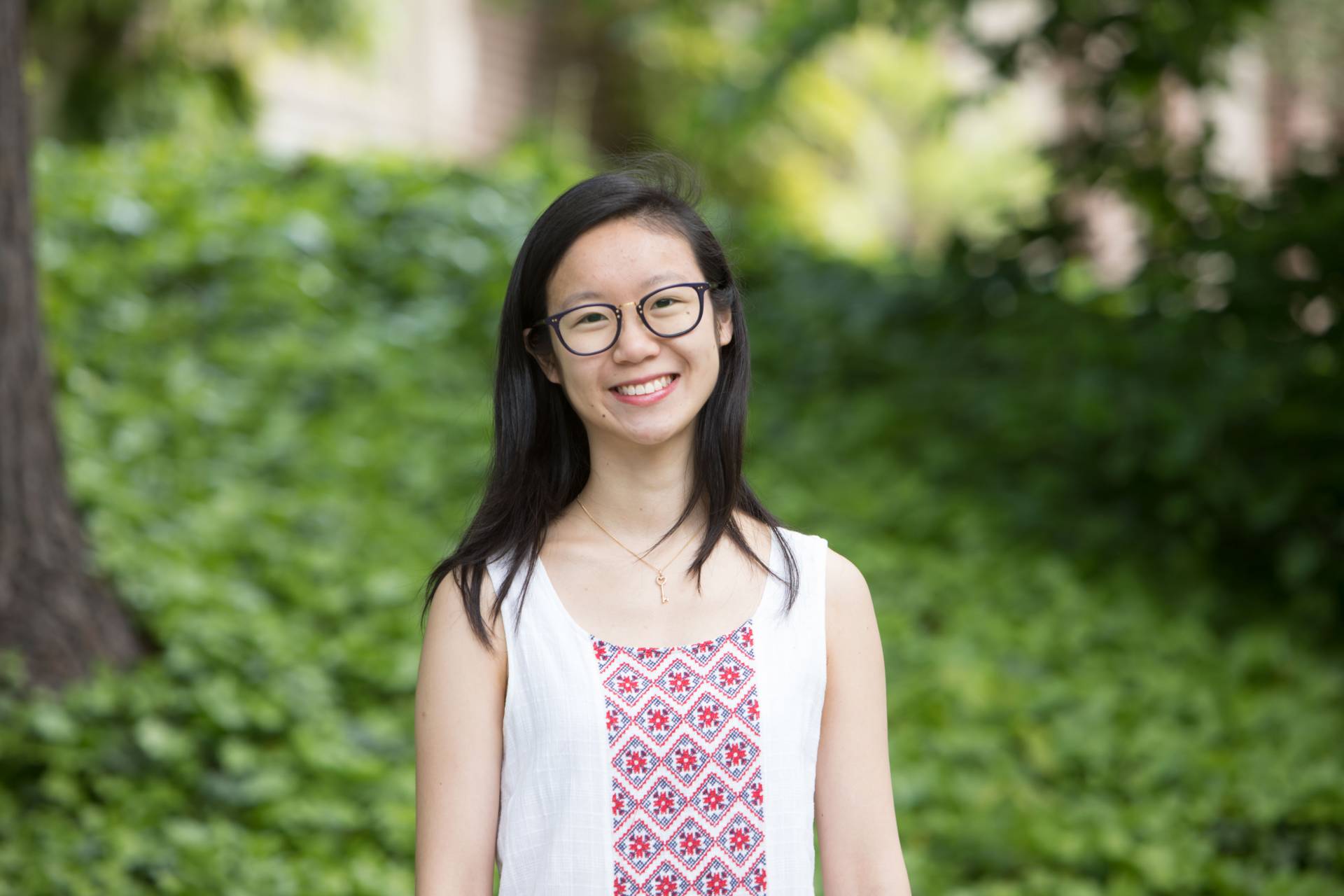 Jin Yun Chow knew when she came to Princeton it was time to step outside her comfort zone.

Starting with the decision to attend college halfway around the world from her native Hong Kong, her journey at Princeton has been shaped by purposeful choices that have taken her into unfamiliar spaces to feed her curiosity about the world.

She has mastered new languages; stepped onto the stage to act for the first time — in French; passed through the doors of prisons to tutor inmates; dived into 19th-century archives to research an underappreciated female translator; and forged deep friendships with people from very different backgrounds.

Her studies in Latin, German and Old Irish, as well as literature classes in Chinese and French, have taken the Princeton senior to the top of her class. A comparative literature major, Chow is the valedictorian of the Class of 2017. She will deliver an address at the University's Commencement ceremony on June 6.

At Princeton, Chow's passion for language deepened through intensive study — and unexpected coincidence. Last fall, she stumbled on a connection between Old Irish (spoken between the seventh and ninth centuries) and Cantonese in a linguistics course taught by Joshua Katz, the Cotsen Professor in the Humanities and professor of classics. She took the course after having taken Katz's "Imagined Languages" class — a roller coaster ride through "Star Trek's" Klingon and more.

"One day we were discussing the Old Irish word for mead (a drink made from fermented honey), which is 'mid,'" she said. A classmate who is Australian and speaks Cantonese pointed out that "mid" was related to the Tocharian word — spoken in very old northwestern China — for honey, "mit." Chow noted that in Cantonese, which preserves the oldest pronunciations of Chinese, the usual transliteration of the word for honey is "mat."

"That one word's journey — from Proto-Indo-European to the geographically distant languages Old Irish and Tocharian and from there into northwestern China and then Cantonese, which is spoken in southeastern China — was just so cool," Chow said. "It confirmed that there are moments in esoteric academic study that aren't so 'ivory-tower-esque.' If you're open-minded enough you can make all these connections with everything else in your life experience."

A member of Mathey College, Chow was awarded the Shapiro Prize for Academic Excellence her freshman and sophomore years. She was elected to Phi Beta Kappa in fall 2016.

After graduating, Chow will pursue a Ph.D. in comparative literature at Stanford University, where she plans to study digital humanities and European-Chinese literary relations. She also will start learning Arabic. "There's so much to be gained culturally and emotionally from languages and dialects," she said.

First, this summer, Chow will return to Hong Kong. She plans to design a humanities curriculum for an education center as well as teach at a summer camp that helps Mainland-Chinese immigrant children adapt to the local school environment. 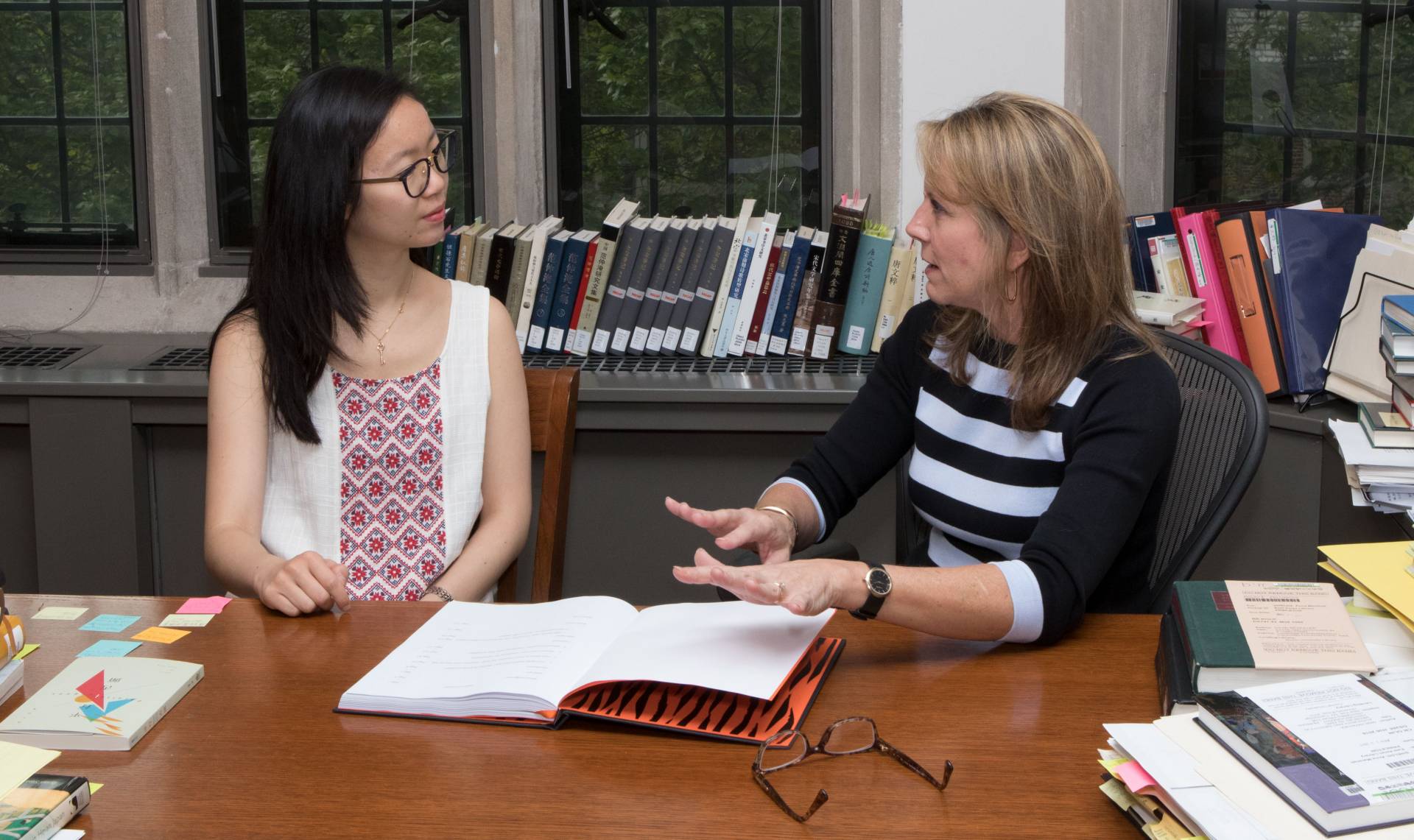 Chow chats with Anna Shields, a professor of East Asian studies and co-adviser on Chow's senior thesis, which explores "Le livre du jade" ("The Book of Jade"), one of the first 19th-century French translations of seventh- and eighth-century classical Chinese poems.

Found in translation: A heroine of her own

Chow's senior thesis explores "Le livre du jade" ("The Book of Jade"), one of the first 19th-century French translations of seventh- and eighth-century classical Chinese poems. The translator, Judith Gautier, was one of the first female translators of Chinese poetry into French, Chow said. "That book caused a little earthquake in the French poetic scene because her father, Théophile Gautier, was one of the most famous French poets of the 19th century — and she was best friends with Baudelaire, a rumored mistress of Victor Hugo, and she had a fling with Wagner."

Chow said Gautier was overshadowed by the male translators of the time and her work was criticized for being riddled with errors and not academic. "My thesis tries to clear her name," she said. "I argue that she's a poet and not only a translator. She wanted to do a popular translation of Chinese literature so people would have fun with it. She may not have had the Chinese level that's required to do an accurate translation, but she's done so much to bring Chinese literature into the French consciousness."

"I don't know of any other student who has worked with me over my 50 years in the profession who could have carried out the delicate task she set herself with such good results," said Peter Brooks, a lecturer with the rank of professor in comparative literature and the University Center for Human Values, who served as co-adviser on Chow's thesis.

"This was a scholarly adventure of the best possible sort, and as adviser I observed and participated with delight," said Brooks, who also advised Chow on her junior paper on the French novelist Nathalie Sarraute.

Anna Shields, a professor of East Asian studies, was a co-adviser on Chow's senior thesis. "It was astonishing to see her agile mind at work on truly complex issues of translation and poetics," Shields said. "I think her thesis is easily publishable in some form. On top of that, she is just a wonderful person — thoughtful, compassionate and enthusiastic about everything — and that will make her a terrific teacher and scholar." 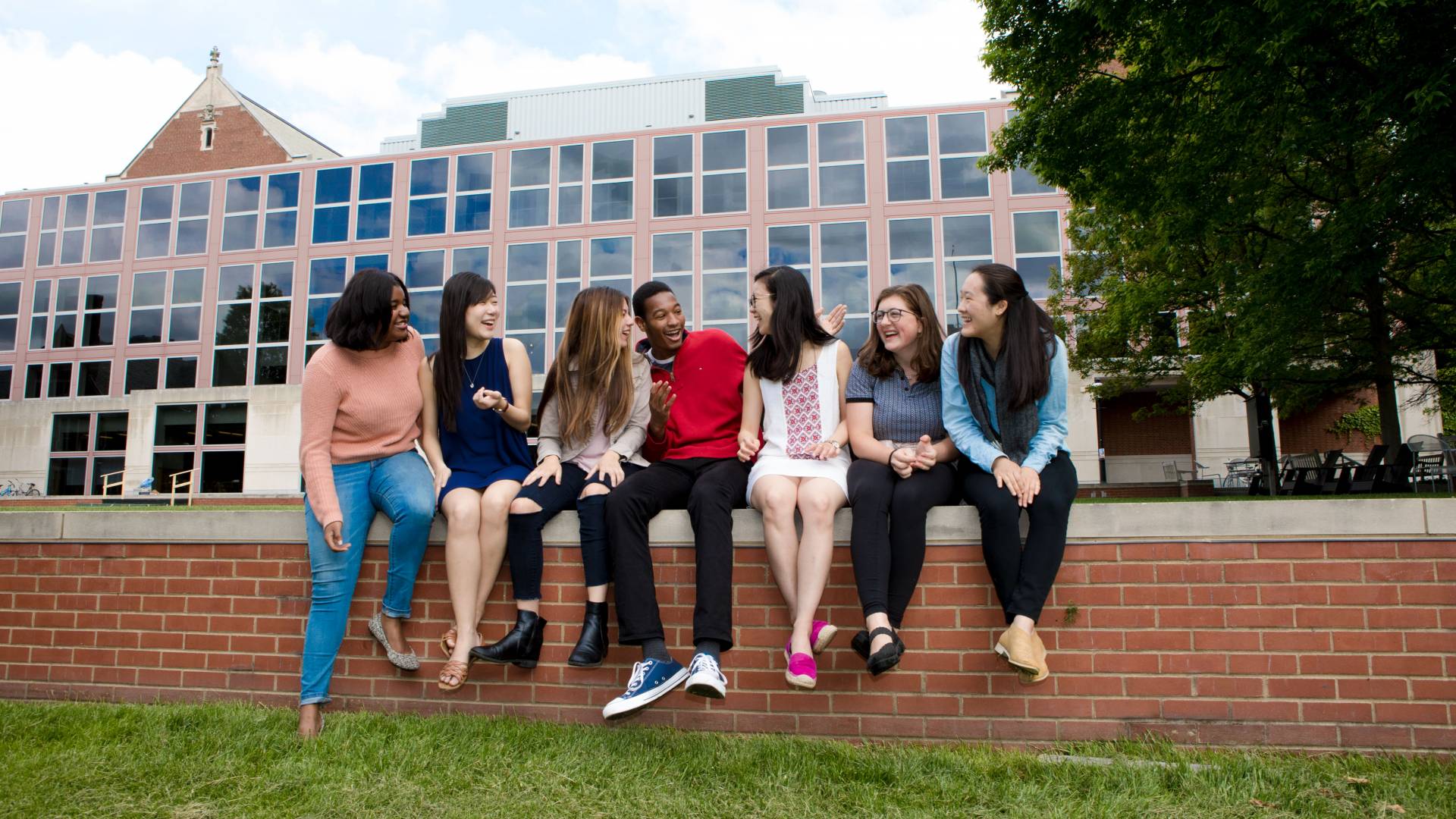 Chow and other volunteers with the Princeton Employment Reentry Program (PREP) — a prison teaching initiative that Chow helped start — catch up outside Frist Campus Center while waiting for the bus to take them to one of the correctional facilities where the program is offered. The volunteers hold workshops and one-on-one coaching in the job application procedure, including resume and cover letter writing and interview training.

Chow's pursuits beyond the classroom speak to her range of interests.

Chow had never acted before coming to Princeton, but in her first year she joined the student French theater troupe L'Avant-Scène, directed by Florent Masse, lecturer in French and Italian.

"I wanted to learn how to enunciate [French] in a way I wouldn't have been able to do just in class," she said. "Having to [act] in a language I'm not comfortable with was the best thing I could do for my French."

After reading an article a Princeton friend wrote in a Hong Kong newspaper about his experience volunteering in a New Jersey prison with the Petey Greene Program, Chow was drawn to volunteer as well. She said she wanted to learn about America through a different lens. "It's so easy to be blind."

"Coming to Princeton was a social-political awakening for me about the realities of life in the United States — discrimination, race, things that had never crossed my mind ... despite having heard nothing but politics around the dinner table as a child," said Chow, whose mother is a civil servant in the Hong Kong government. "I came here and got interested in American politics, which now makes me want to go back and learn more about where I come from."

Even Chow's friendships have opened new spaces — "everyone in my school [growing up] was Chinese" — as she's met people at Princeton from a wide variety of backgrounds and countries. Other friendships have crossed generational lines. After taking the course "Children in the Holocaust" taught by Froma Zeitlin, the Ewing Professor of Greek Language and Literature, Emeritus, and professor of classics and comparative literature, emeritus, she and Zeitlin became fast friends. "She's like my god-grandmother," Chow said.

"Jin is simply one of the best students I have ever taught at Princeton," said Zeitlin, who joined the University in 1976. "Perceptive, engaged, intellectually curious and willing to take academic risks are a few of her most defining characteristics. Combine these traits with a delightful modesty, an infectious sense of humor, and an ability to make and keep friends. All her work in my course was off the scale in depth of analysis, linguistic sensitivity and original expression. Jin certainly exemplifies the wisdom of Princeton's determination to recruit international students, such as she, with different backgrounds, languages and life experiences." 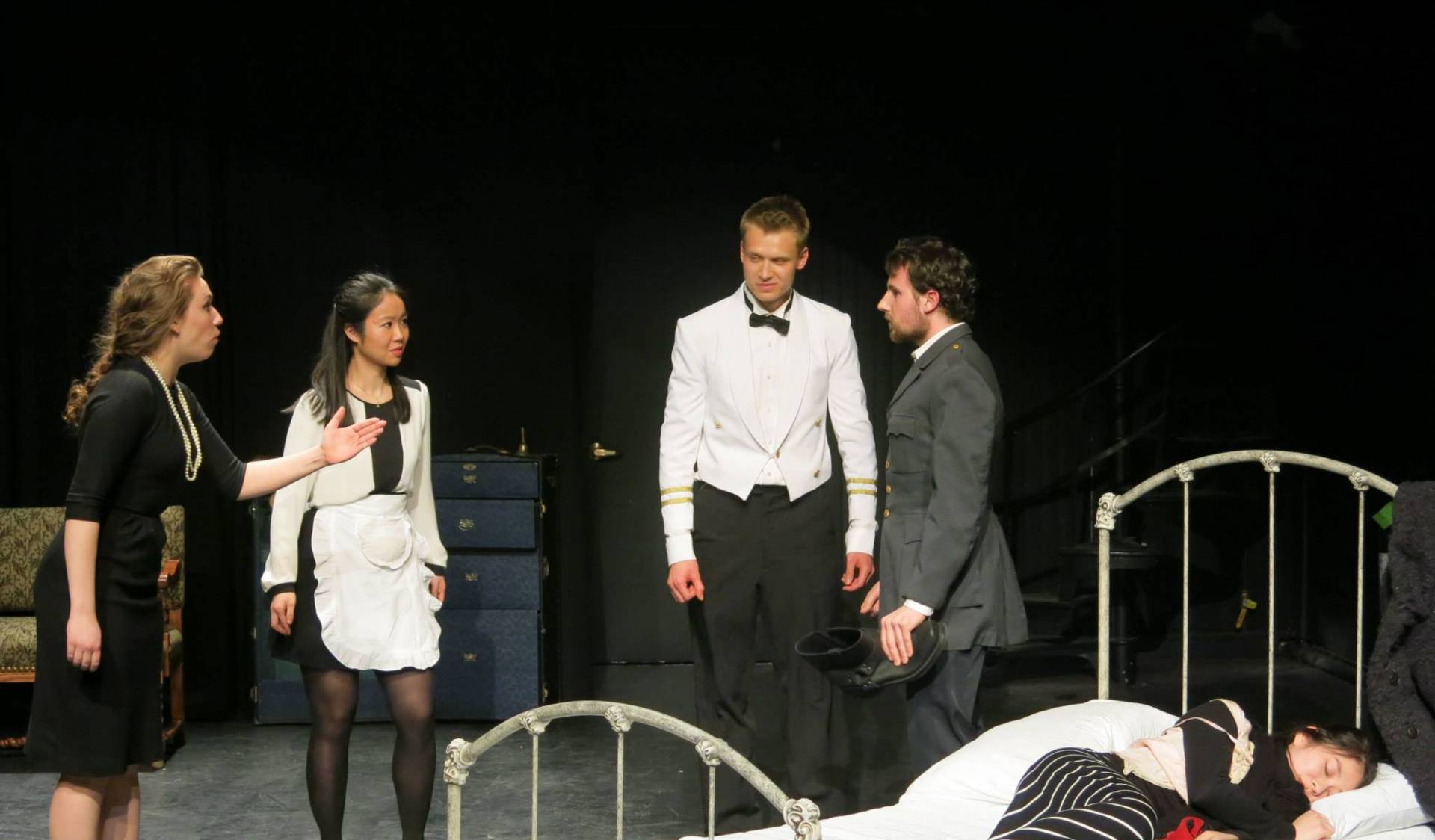 Photo by Warren Rieutort-Louis, graduate student, for the Department of French and Italian

Chow said her favorite experience during her four years at Princeton happened this spring at 2D, the student vegetarian co-op. It's "an amazing, diverse community of international and American students," she said.

"I'm very disciplined and uptight with my time — something I'm actively trying to change," Chow explained. "I don't just hang out spontaneously. But this day, after dinner, a group of us, about six women, had a really open conversation about things that are taboo: body image, eating disorders, intimacy problems. That was really eye-opening for me because I come from a very conservative background, as in we don't talk about things that we're not supposed to talk about."

But the true highlight came later in the evening, when the group stepped out into the clear night, the sky awash in twinkling stars. "There was a graduate student in astrophysics sitting on the lawn," Chow said. "He taught us how to distinguish between a planet and a star. You could see Jupiter right next to the moon, because the sun was lighting them both up. We used an app that tells you where the constellations are. It makes you feel small and unimportant in a really liberating way. The best things happen unplanned."

Even what Chow calls her "worst experience at Princeton" had a positive outcome. In her second week on campus her lung collapsed due to a rare condition. It had happened twice before she came to Princeton. Chow had emergency surgery and spent a week in the hospital. Shaken, alone and very far away from home, she had a lot of time to think.

"It really changed the way I thought about how to live life at Princeton, to be reminded about what is most important when your health — and life and death — is on the line, realizing how important it is to take care of your physical and mental health and how easy it is to lose all that in just one second," she said. "If I'm able to get through that, then I'm fine with anything else."

Chow highlights that experience as well as teaching in prisons as her "go-to pillars for reminding myself that there's so much more out in the world that needs to be cared about."

Looking back on her time at Princeton, Chow said: "These four years have felt like a fairy tale where I was given the unprecedented chance to immerse myself in intellectual stimulation while engaging in community service. It has given me the hope and inspiration to continue to strike this balance wherever life takes me in the future."