The Program in Translation and Intercultural Communication is the most extensive effort of its kind in the country, encouraging students to study translation through courses in the arts, humanities and sciences, as well as through language learning and study abroad. Director David Bellos (shown above in class) said he hopes the program will "make tomorrow's leaders more reflective about translation issues, and better informed about how and why communication between cultures succeeds and also often fails in the modern world."

Below left: The program educates students about the interplay of language and culture, and the task requires academic instruction across many fields and study abroad. In the introductory course, "Thinking Translation: Language Transfer and Cultural Communication," Bellos, a professor of comparative literature and French and Italian, invited numerous guest lecturers, including anthropology professor James Boon, shown here. 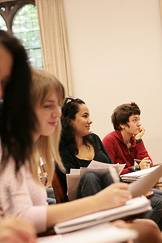 Students in the program must be deeply proficient in a language other than English. Junior Gabriel Cortes, a student in "Thinking Translation" who speaks Portuguese, French and Spanish, said he thinks all of the students are gaining an appreciation for other cultures and languages. "All of my peers bring something different to the table, which is really useful," he said. "It really broadens things instead of thinking in just a Western mind frame. It opens discussions to a level I wouldn't have expected them to go."     Photos: Denise Applewhite

A new certificate program launched by Princeton this fall is the largest, most extensive effort in the country to educate students about the important role that translation plays across academic fields and in cultural understanding.

The Program in Translation and Intercultural Communication is the first of its size and scope at a U.S. university, according to director David Bellos, a professor of French and Italian and comparative literature. Students pursuing the new certificate can focus on the field of translation through a broad selection of courses in the arts, humanities and sciences, working with faculty from numerous departments. Princeton has taken a more comprehensive approach than other institutions, where such programs typically are tied to specific language or creative writing departments or are intended to train students to be professional translators, he noted.

The sweeping nature of the University's program is critical because, though students may not realize it, they encounter works in translation in nearly every field of study, said Bellos, a world-renowned literary translator.

"It's the very fabric of understanding that we want this program to bring to the light," he said. "We want to teach students -- engineers or chemists or scholars of English or historians or musicians -- what translators do and how to better understand their work, because students are using it all the time. What we aim to do -- because it is long overdue -- is to educate the users of translation. We want to make tomorrow's leaders more reflective about translation issues and better informed about how and why communication between cultures succeeds and also often fails in the modern world." 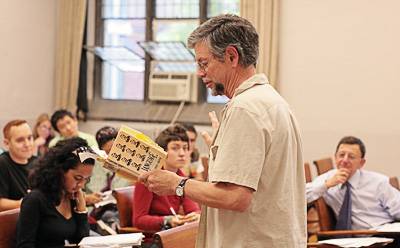 Sandra Bermann, chair of the comparative literature department, and Michael Wood, the Charles Barnwell Straut Class of 1923 Professor of English and Comparative Literature, developed the proposal for the certificate. The program includes professors in 17 departments, programs and centers -- from language departments to psychology and physics -- and has attracted certificate candidates who speak numerous languages.

Along with interdisciplinary work, the program requires international learning. Students must be deeply proficient in a language other than English; they also must spend a year, a semester or six weeks of summer in a Princeton-approved course of study or internship in a country where that language is spoken.

The program resides within the Princeton Institute for International and Regional Studies, which will provide support for translation workshops, guest lectures, study abroad and new courses, Bellos said.

The new program comes at a time when people encounter other cultures more than ever before -- in media, politics, business and everyday life, Bermann said.

"It is meant, overall, to help students prepare to enter the world as responsible citizens and often as leaders," Bermann said. "We had a vision for the future where there would be greater understanding among people of the world, empathy rather than fear. Learning languages and cultures, as well as gaining an awareness of the challenging translations between them, is an important way to achieve that."

In part, the program grew out of student interest. Some students had approached Bermann asking for resources to study the role translation plays in international affairs.

Others, such as junior Chloe Estep, are interested in deeper study of translation. Estep, a comparative literature major, is planning to complete the translation certificate.

"I've always had an interest in translation, and I was siphoning that into linguistics, but when this opened up I jumped at it," she said. "It's a lot of theory … and things I never thought about before, and it's really interesting."

Three years ago, as Bermann and Wood were editing a collection of essays for a book titled "Nation, Language and the Ethics of Translation," the two discussed the idea of a certificate in translation. Realizing the University's interest in international initiatives, Bermann next spoke to President Shirley M. Tilghman.

With Tilghman's encouragement, Bermann discussed the idea with the Academic Planning Group, commissioned a graduate student to provide an overview of translation programs in the United States and abroad, and reached out to colleagues across the University. They created an executive faculty committee, chose Bellos as the director and received final approval in the spring of 2007.

The committee created two required courses -- a 200-level seminar called "Thinking Translation: Language Transfer and Cultural Communication" that Bellos is teaching this semester and a senior seminar that Wood will teach next fall. Students must take electives in two groups -- courses that are focused narrowly on translation and others with broader perspectives. The electives include existing courses such as "Multicultural Theater Practices" and "Psychology of Language."

Along with the courses and the requirements of language learning and living abroad, students must incorporate issues of translation into their senior thesis or complete a separate independent project on a relevant topic.

"There's a special mental state you need to be in where you're working in two languages all the time," Bellos said. Going abroad forces students to think this way, and they then can apply that experience to their independent work, he said.

An understanding of linguistic diversity is the foundation of the program, but the courses and research possibilities will be expansive, Bermann said.

"Translation is conceptually a very broad topic. It can mean between two ordinary languages -- like French and German, Swahili and Chinese-- and it can mean between media, text and film, or in computing. One can study this from many semiotic points of view, or even between cultures that might speak the same language," Bermann said.

Examining translation in various fields will reinforce critical elements such as linguistics, cultural knowledge and personal experience, said computer science professor Robert Schapire, who is on the program committee.

"By thinking about the issues involved in getting a mechanical device such as a computer to solve problems, like with machine translation, we tend to come away with a new understanding of language and intelligence, but also an appreciation of how difficult these tasks really are and how truly remarkable it is that all of us as humans are able to speak and understand language," he said.

Bellos has grand plans for the introductory course, "Thinking Translation."

"My delight in teaching this course is I can actually design the field that I've been professionally involved in for decades as I think it is and should be understood," Bellos said. "So it's both quite scary to be without institutional precedent and tremendous fun."

To help cover the wide range of topics, Bellos has invited six guest lecturers to the course, including a United Nations interpreter and a technical specialist from AT&T Research Labs who works with machine translation.

During the third week of the term, Princeton anthropology professor James Boon visited the class to discuss linguistic relativism, the idea that differences in language reflect differences in the worldviews of the people who speak them.

"It's the reality of the human predicament," Bellos said, introducing linguistic relativism at the start of class, "and from that come serious questions about the relationships -- actual, possible, theoretical -- between language and culture, and between language and thought."

Boon focused on 20th-century anthropological linguist Edward Sapir, who once translated the sentence "The farmer kills the duckling" into German, Chinese and the Native American languages of Yana and Kwakiutl to show different grammatical structures and meanings in each version. In Kwakiutl, the translator would need to know whose duck was killed to construct the sentence, because that is important in the culture, Boon said.

The students also bring a considerable amount of language experience to the class. The 21 undergraduates have some level of proficiency in 17 languages.

Before the term began, Bellos said he hoped "to make students realize what a fabulous resource they have among themselves."

The lesson seems to be catching on.

Junior Gabriel Cortes, a student in "Thinking Translation" who speaks Portuguese, French and Spanish, said he thinks all of the students are gaining an appreciation for other cultures and languages.

"All of my peers bring something different to the table, which is really useful," Cortes said. "It really broadens things instead of thinking in just a Western mind frame. It opens discussions to a level I wouldn't have expected them to go."