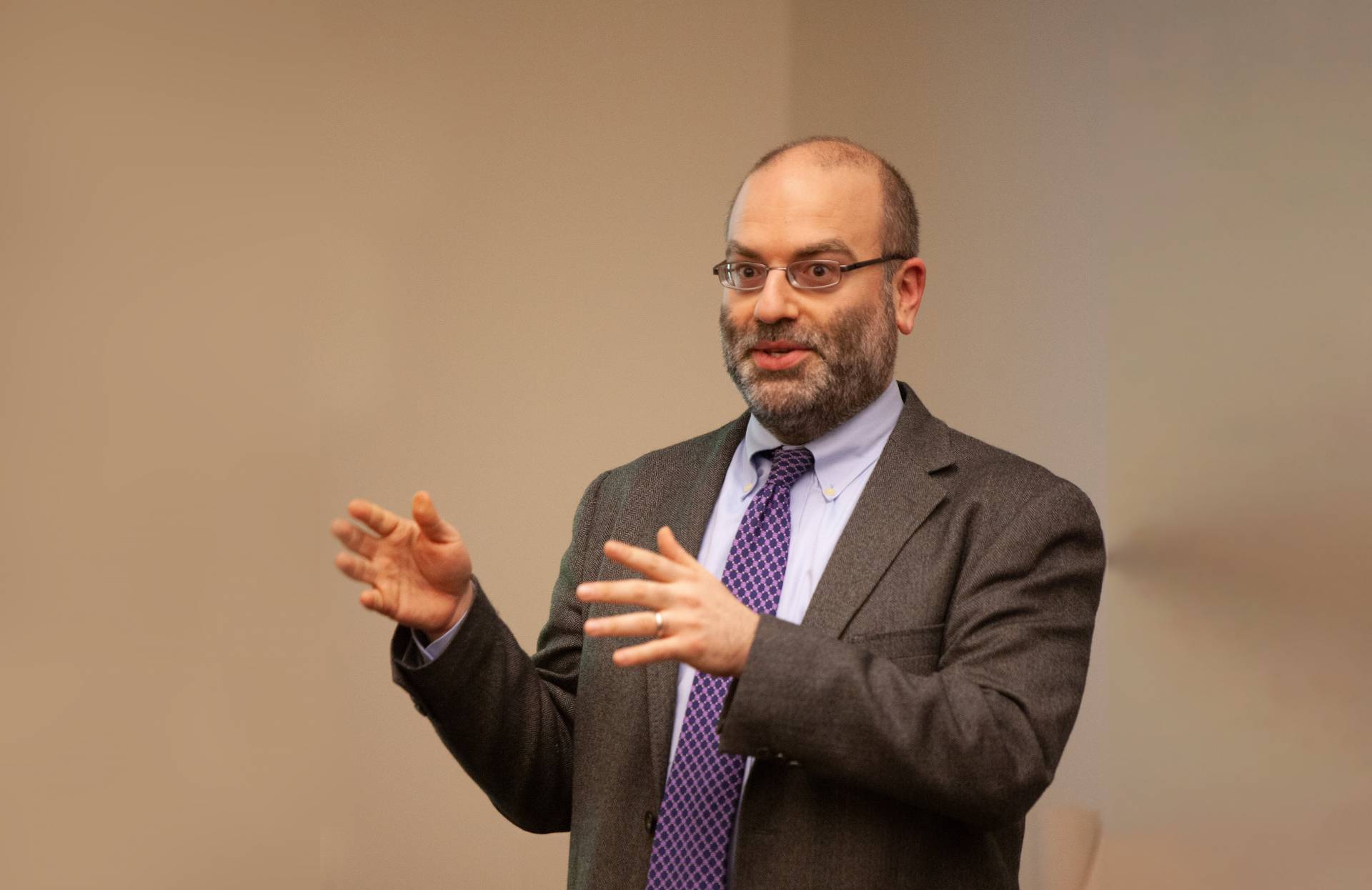 A century and a half ago, a Russian chemistry professor published a classification of all the known elements, organized by atomic weight. Today, the system that he created for his students — plus some updates and including about twice as many elements — is found in chemistry classrooms around the world.

Now known as the Periodic Table of the Elements, it was first shaped in February 1869 by Dmitrii Ivanovich Mendeleev (1834–1907), then a professor of general chemistry at St. Petersburg University, in the capital of the Russian Empire. The story of the “attempt at a system of elements,” as Mendeleev titled his initial publication, has been laid out clearly by science historian Michael Gordin in a special issue of the journal Science.

Gordin, Princeton’s Rosengarten Professor of Modern and Contemporary History, has said he was drawn to the history of science because of what it can teach scientists and nonscientists alike. He is also the director of the Society of Fellows in the Liberal Arts and the author of several books, including a 2004 biography of Mendeleev; a second edition was published in December by Princeton University Press. 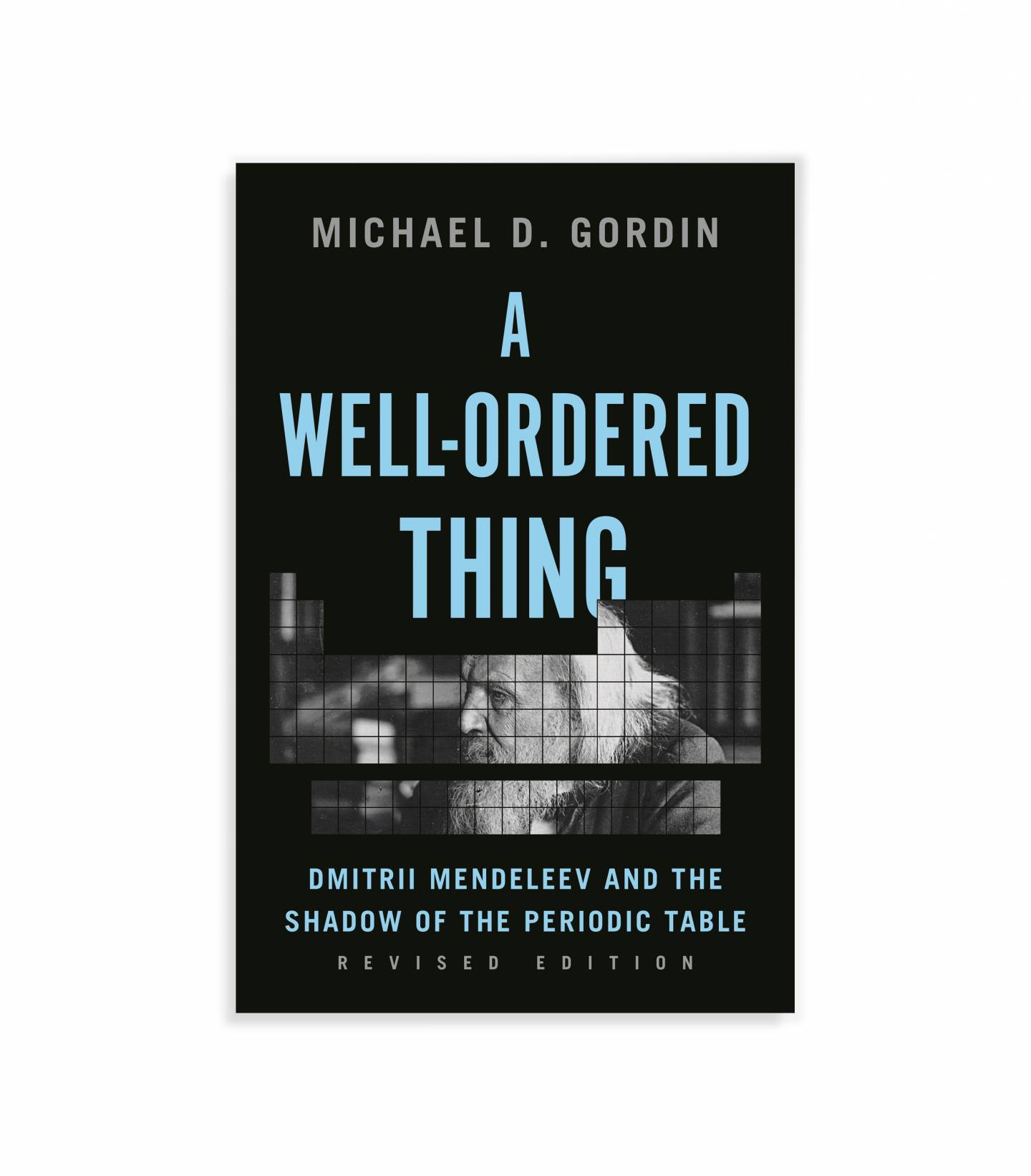 A revised edition of Gordin’s 2004 biography of Dmitrii Mendeleev was published by Princeton University Press in December 2018.

Why do you think Mendeleev’s arrangement has held up over time, while the prior attempts have largely been forgotten?

There are two primary reasons for this. The first is that Mendeleev did something rather surprising that none of the five other preceding tabular arrangements of elements did: he left empty spaces in the table when he thought that elements were better placed elsewhere — that is, he did not assume that chemistry had found all the elements yet — and then predicted the chemical and physical properties in detail for three of them. Those were discovered over the next two decades as gallium, scandium and germanium. Before Mendeleev, this kind of elemental prediction simply hadn't been tried before, let alone been successful. The successful discoveries, which Mendeleev rooted in his periodic system, made people take notice of what he had done in a way that was not matched by the others.

The second reason tells you a little about Mendeleev's personality. When a dispute over who deserved full credit for the table — Mendeleev alone or him in combination with Julius Lothar Meyer, who had also developed an impressive system at roughly the same time — Mendeleev was very aggressive in defending his priority and his right to sole credit for the system. Although at first the chemical community was inclined to give them both credit, over time the accolades went to Mendeleev alone. The fact that he died after all of his competitors meant that he had a role to play in shaping the story.

What is the biggest shift between his version and the one in every chemistry classroom? What, if anything, has remained unchanged?

The biggest shift is that the table is currently arranged using the atomic number, the number of protons in the nucleus of a chemical atom. The number of positively charged protons determines the number of orbiting electrons, and those electrons are responsible for the element's chemical properties. Mendeleev did not know about protons. (The electron itself, discovered in 1897, was something Mendeleev remained suspicious of until his death in 1907.) Mendeleev, by contrast, organized the elements by increasing atomic weight. This is a reasonably good proxy for what we now understand to be really going on, but it isn't infallible. Certain elements, such as tellurium and iodine, are arranged with the heavier element (tellurium) first in both Mendeleev's order and on today's table. Mendeleev thought this was a frustrating anomaly; for us, it is not a problem at all, since we don't think atomic weight is the determining factor.

What has stayed the same is perhaps more remarkable: Mendeleev got the families of chemical elements (that is, the vertical columns) right. Chemists have added a lot of elements to the bottom of the table and a whole new family of noble gases on the right end, but they haven't rearranged the elements in the middle. Of the 63 elements known when Mendeleev put his first table together, he got the order correct.

You have spent years studying Mendeleev. What makes him such a compelling figure to you?

I have been fascinated by both Russian history and the history of science for a long time. There are many places where those two interests overlap, but probably the most widely known name of a Russian scientist is Mendeleev. (Ivan Pavlov is another good candidate.) As someone interested in chemistry, I was encouraged in graduate school to pursue a dissertation providing a biographical study of Mendeleev. I found him a fascinating figure in many ways. In his former apartment on the grounds of St. Petersburg University you can find a museum to his life and also an astonishingly vast archive of his correspondence, research notes and library. The more I dug, the more I found out. 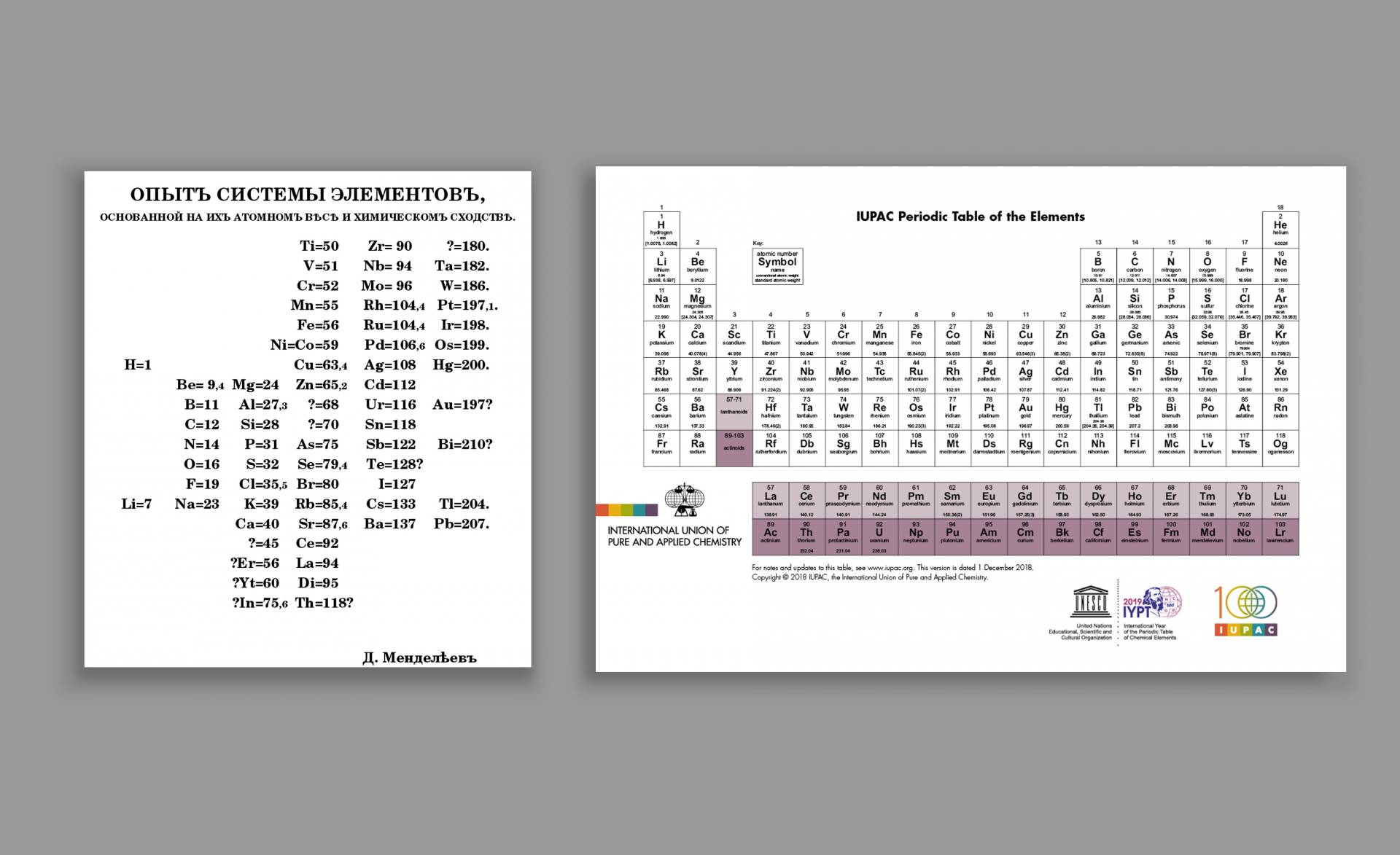 Left: Mendeleev titled his February 1869 publication "An Attempt at a System of Elements, Based on Their Atomic Weight and Chemical Affinity." Mendeleev’s table was designed to be read top to bottom and then left to right. To orient it like the modern table, it needs to be rotated 90 degrees clockwise and then flipped across its vertical axis. Right: The International Union of Pure and Applied Chemistry (IUPAC) regularly updates its familiar "Periodic Table of the Elements." The most recent iteration, published Dec. 1, 2018, includes a newly revised atomic weight range for argon.

Right: Table reproduced by permission of International Union of Pure and Applied Chemistry

What would you like people to know about Dmitrii Ivanovich Mendeleev?

There's a lot more to him than just the periodic system of chemical elements! He lived for a long time — 1834 to 1907 — which meant that he was 35 when he published his first table. Although he worked on the table for the next three years and then returned to the topic on and off again for the rest of his life, he spent most of his career doing many other things: he was a primary adviser to the Ministry of Finances and organized a highly protectionist tariff for Russia; he was the key mover in the introduction of the metric system to Imperial Russia; he led a public campaign to debunk séances of spiritualists; he developed a form of smokeless gunpowder; and he was a highly visible and influential member of St. Petersburg culture during one of its most dynamic periods. There is a quite vibrant personality behind that table on the classroom wall.

"Ordering the elements: Elegant and intuitive, today’s periodic table belies the hard-won discoveries hidden within," by Michael Gordin, appears in the Feb. 1, 2019 issue of Science (DOI: 10.1126/science.aav7350). The Periodic Table of the Elements, copyright © 2018 International Union of Pure Applied Chemistry, is reproduced with permission.