Their colorful or faded spines might peek out of boxes or stand sentry along the windowsills. They might be piled on the desk in tiny towers. Or they may be neatly — yes, methodically — arranged on floor-to-ceiling shelves. Any visitor to a professor's office is sure to be struck by the sheer number of books in residence, regardless of the method or the madness by which they are organized.

As beach bags, backpacks and airline carry-ons are being packed, summer asks its perennial question, "What are you reading?" Below, six Princeton professors talk about how the books on their shelves relate to their scholarship and teaching, highlight one or two favorite books, and share what's on their own summer reading (and in one case, film) lists. 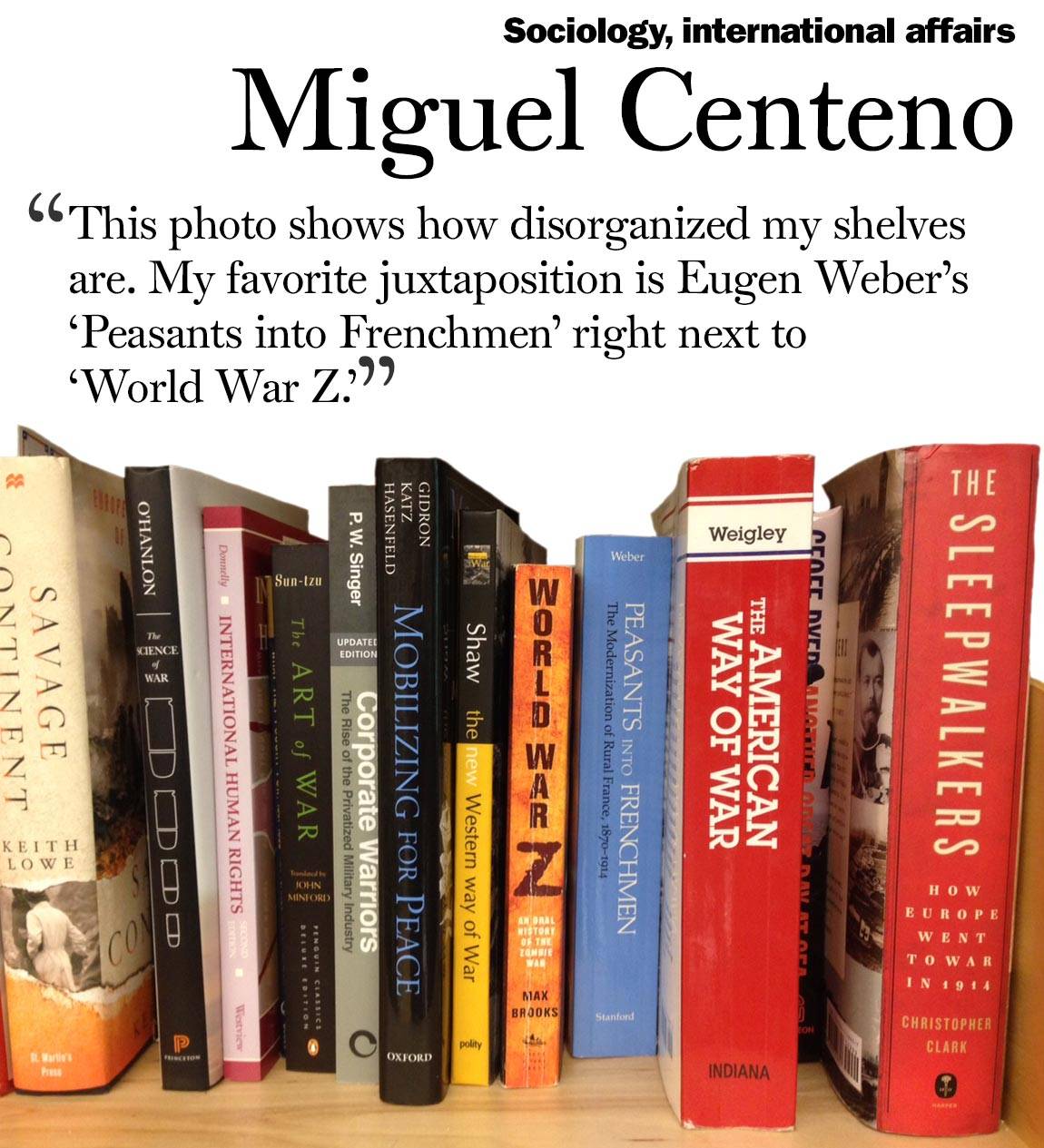 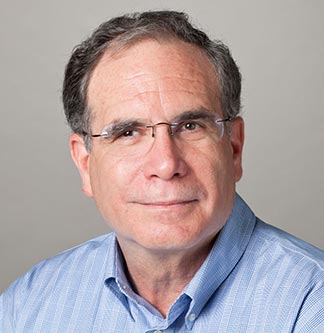 This photo shows how disorganized my shelves are. My favorite juxtaposition is Eugen Weber's "Peasants into Frenchmen" right next to "World War Z." The former is a foundational book in the study of the nation-state — really unequaled in scope and scale. I have been trying to edit a series of volumes that, using more than two dozen authors, comes a little close to doing for Latin America what Weber does singlehandedly for France. This is always on my graduate reading lists, and it is a book that rewards every re-reading. In the end, it is a perfect example of deep and analytical scholarship done with historical vigor and lovely writing. "World War Z" is kind of fun as well and actually not a bad book for students of war!

My piles of reading take up several feet of floors at home. I keep reading about World War II (the subject of a possible course in the future) including a new biography of Josef Goebbels.

I am also working on a new book about discipline, and this means I am reading things like the "The Rule of St. Benedict" and my colleague Robert Kaster's great book on emotion in ancient Rome ["Emotion, Restraint and Community in Ancient Rome"]. In between, I spend too much time trawling the Web and reading mysteries and dystopic science fiction! 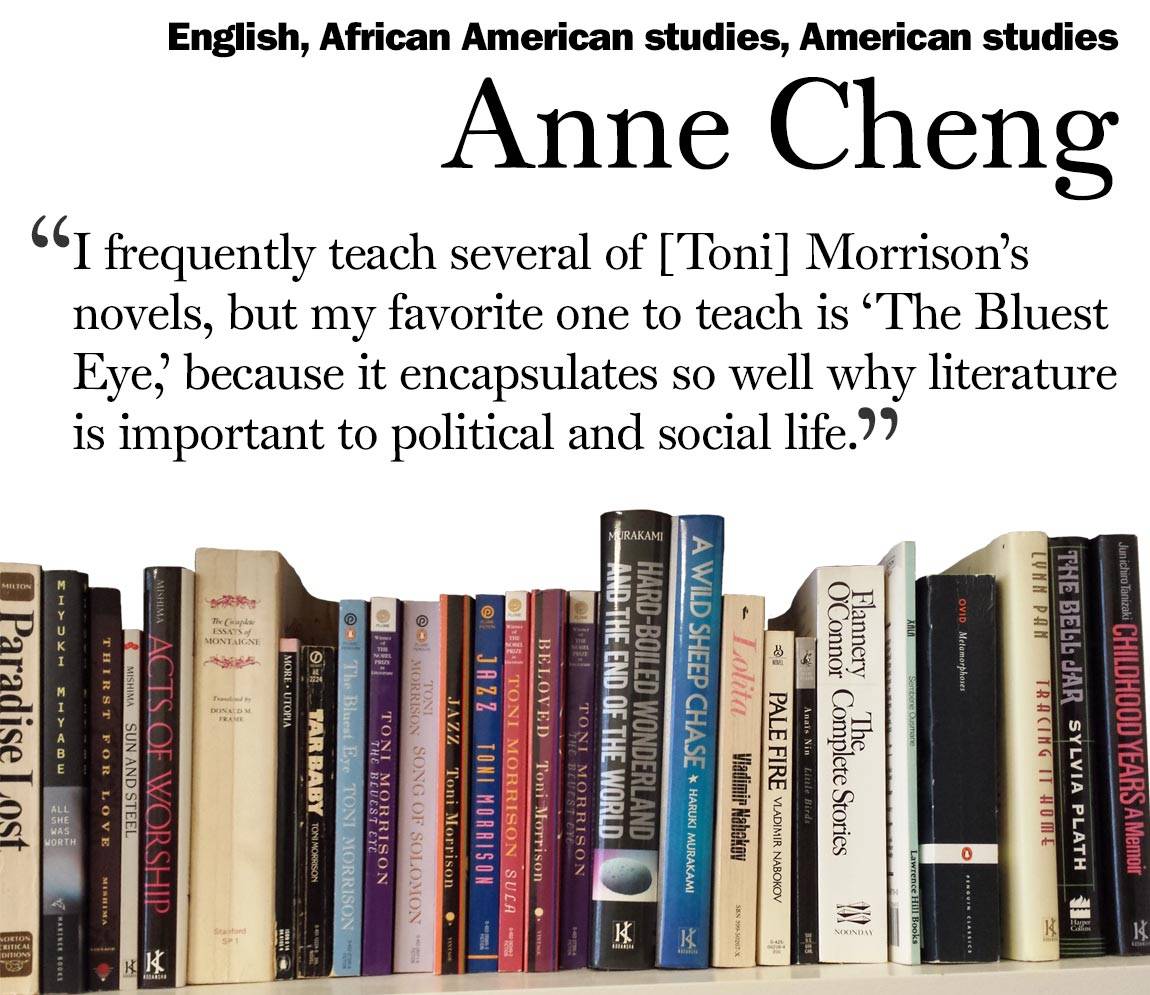 This photo captures the "M" section of my fiction bookshelf, which contains one of the most important authors to my intellectual life: Toni Morrison. I frequently teach several of Morrison's novels, but my favorite one to teach is "The Bluest Eye," because it encapsulates so well why literature is important to political and social life. It is a famous novel about the problem of beauty and "racial preference," but we do not read Morrison for sociology (though there is that context as well); we read her for her exploration of the complex, at times contradictory, affective afterlife of having been made into a "raced subject." 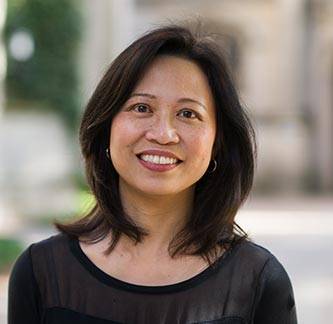 People think that literature and fiction can reflect social reality, and of course they can. But I think literature does more than reflect reality; it can also provide a language to help us confront and think through that which is ineffable in the material realm. "The Bluest Eye" is an exquisite example of this.

By the way, I see in the photo that Morrison is sandwiched between Montaigne (the 16th-century French essayist who taught me a lot about the complexity of "self-representation" as a genre) and Haruki Murakami (the contemporary Japanese novelist whose first novel in English "Wild Sheep Chase" I worked on during my previous life in publishing). So, all in all, this photo captures quite an important snapshot of my life!

The pile of books that I have to read this summer is overwhelming but let me name the top three that I am reading for no purpose but to read them. My pleasure reads: A.S. Byatt's "Little Black Book of Stories," Paul Barolsky's "Ovid and the Metamorphoses of Modern Art from Botticelli to Picasso" and Elena Ferrantes' "My Brilliant Friend," given to me by a good friend. 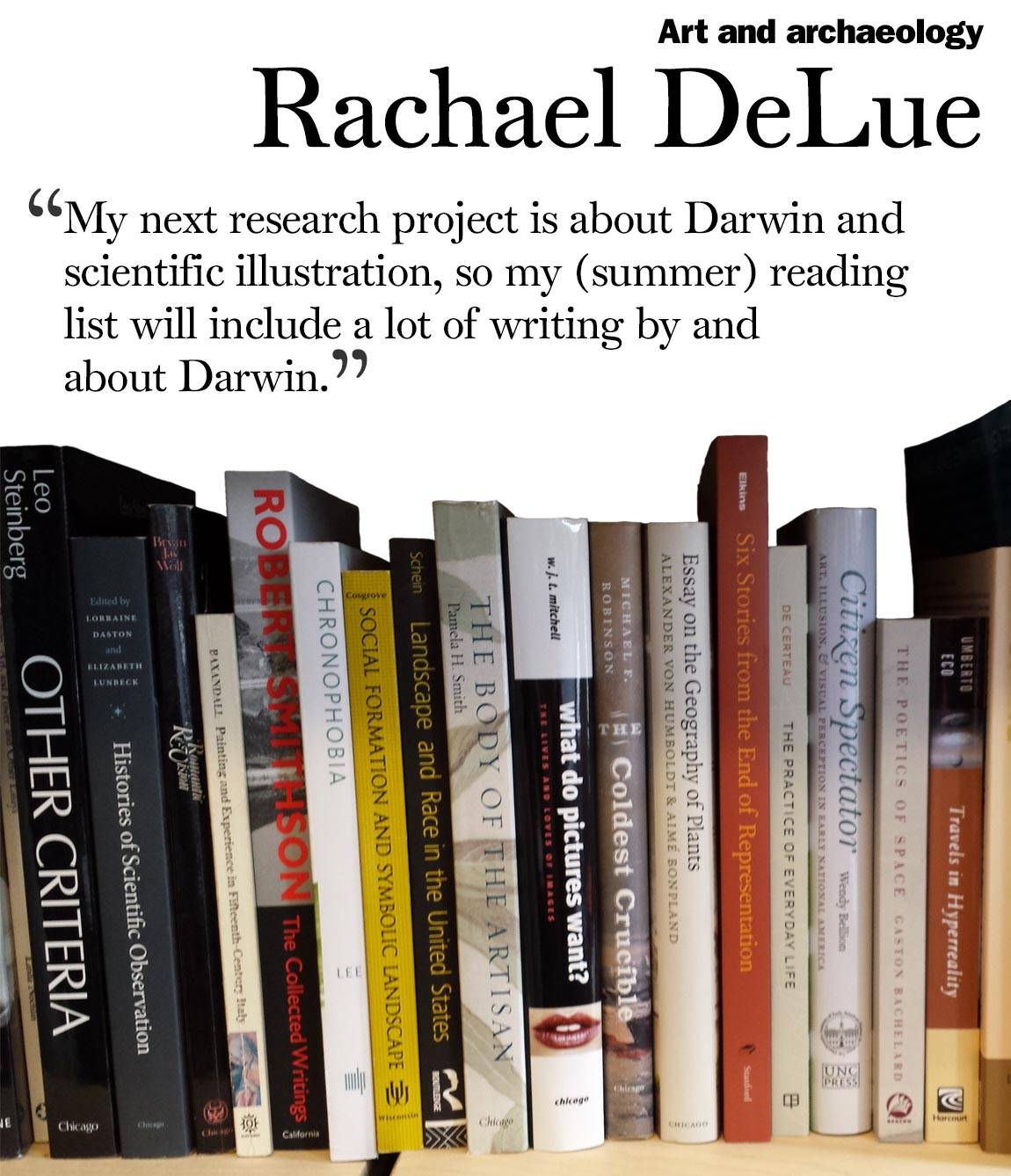 I research and write about intersections between art and science in America, particularly in the 19th and early 20th centuries. The work of the German naturalist and explorer Alexander von Humboldt (1769-1859) wielded great influence in European and American scientific and intellectual circles, inspiring among others Charles Darwin, Johann Wolfgang von Goethe and Ralph Waldo Emerson. His ideas also had traction with artists, especially landscape painters, who shared with him a fascination with the natural world as well as the ambition to describe nature's vastness and infinite complexity in a compact and legible form — for Humboldt with words, numbers and maps, for artists with paint and canvas. 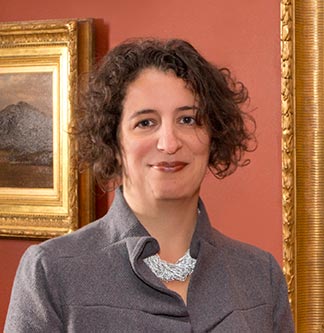 Humboldt's "Essay on the Geography of Plants," published in Paris in 1807, chronicled his multi-year research expedition to Central and South America. It described for the first time his now-famous vision of a unified "science of the Earth" that integrated various scientific disciplines such as biology, botany, meteorology, chemistry and geology in order to offer a comprehensive account of the Earth's surface and its inhabitants. Humboldt's interdisciplinary approach was hugely appealing to artists searching for higher meaning in nature's phenomena and forms.

I just finished writing a book, "Arthur Dove: Always Connect," on abstract painting in the first half of the 20th century in the U.S. My next research project is about Darwin and scientific illustration, so my reading list will include a lot of writing by and about Darwin.

My summer fiction list includes "The Narrow Road to the Deep North" by Richard Flanagan, "Seveneves" by Neal Stephenson and "Stone's Fall" by Iain Pears, along with (finally!) Hilary Mantel's "Wolf Hall" and "Bring Up the Bodies." I'm also hoping to have a chance to read Elizabeth Kolbert's "The Sixth Extinction: An Unnatural History" and Jill Lepore's "The Secret History of Wonder Woman." 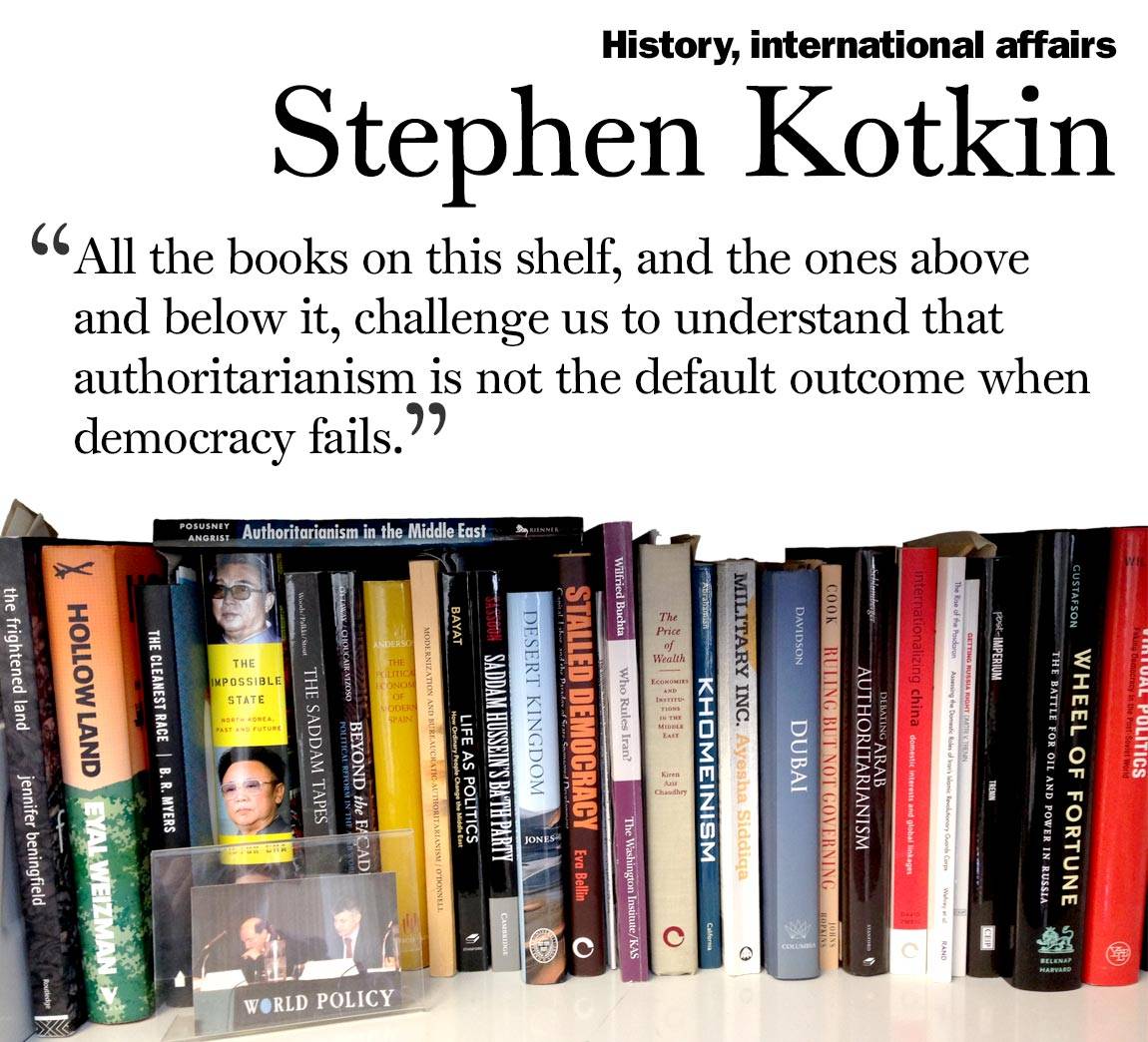 That's one of a half dozen shelves in my office of books on authoritarianism, which I use in my Woodrow Wilson School seminar that alternates year to year, either for undergraduates or master in public affairs (MPA) students.

One book there I deeply like is Brian Myers' "The Cleanest Race," which explains how the propaganda of the North Korean regime, surprisingly, has managed to adapt to the fact of South Korea's increasing wealth. Another great one is "Wheel of Fortune" by Thane Gustafson, one of the best works on today's Russia because it explains the economy there.

I also really like "Military Inc.," about Pakistan, which I reviewed in The New York Times back when I was the Sunday business book reviewer. It pulls together amazing investigative reporting to show how a country's democratic attributes can be overridden.

All the books on this shelf, and the ones above and below it, challenge us to understand that authoritarianism is not the default outcome when democracy fails; authoritarian regimes, no less than democracies, must be built, and sustained. And they come in a full spectrum of variations, from highly competent to utterly inept.

By the way, the bald guy next to me in the photo is the late Boris Berezovsky, Russian oligarch, whom I once brought to Princeton. 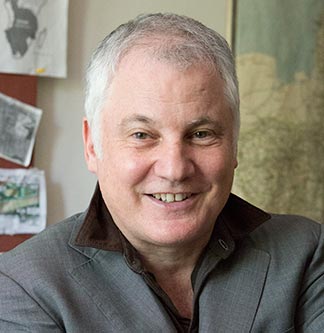 This summer, bookwise, I'll mostly be working to edit down and complete the sprawling manuscript of volume II of my Stalin biography. It covers 1929 to 1941, up to the day of the Nazi invasion, and is subtitled "Waiting for Hitler."

One book on my desk ready to be cracked open is the biography of Hitler's devilishly effective minister of propaganda, Goebbels, by Peter Longerich. Also, I'm eagerly looking forward to the fall, when Niall Ferguson's major new biography of Henry Kissinger will appear.

Princeton University Press (PUP) will be publishing "Phishing for Phools" this fall, by George Akerlof and Robert Shiller, and I'm keen to sink my teeth into that one as well — I love the killer economics list put out by PUP.

Right now, I'm about halfway through Jackie Wullschlager's biography of Chagall, which came out a few years ago — it's brilliant. Chagall was a native of the town of Vitebsk, which happens to be where my father's family came from. 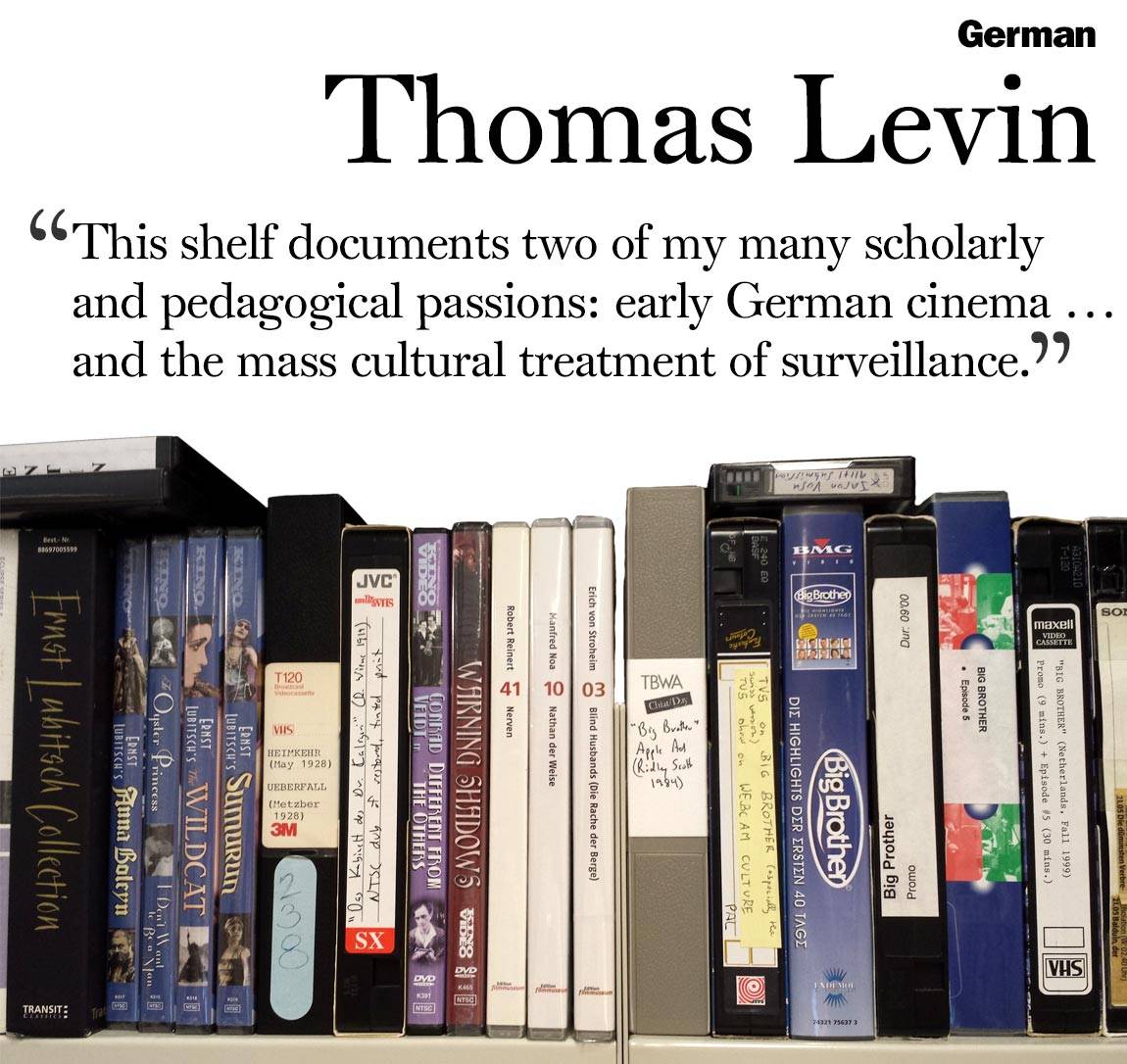 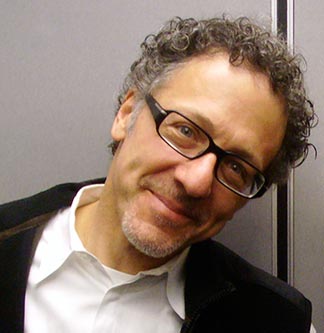 This shelf documents two of my many scholarly and pedagogical passions: early German cinema (including, for example, Conrad Veidt's remarkable 1919 "Different from the Others," which is one of the first feature-length fiction films dealing with the question of homosexuality); and the mass cultural treatment of surveillance (including Ridley Scott's famous 1984 IBM-as-Big-Brother commercial introducing the Apple computer, which ran only once, during the Super Bowl halftime).

In the wake of Laura Poitras' enormously important and powerful 2014 Edward Snowden documentary "CitizenFour," I put together for my summer viewing a film series dealing with the topic of the whistleblower including Alan J. Pakula's 1976 "All the President's Men" (on the Watergate scandal), Rod Holcomb's 2003 "The Pentagon Papers" (on Daniel Ellsberg's publication of classified government documents) and Bill Condon's 2013 "The Fifth Estate" (on the Wikileaks story). 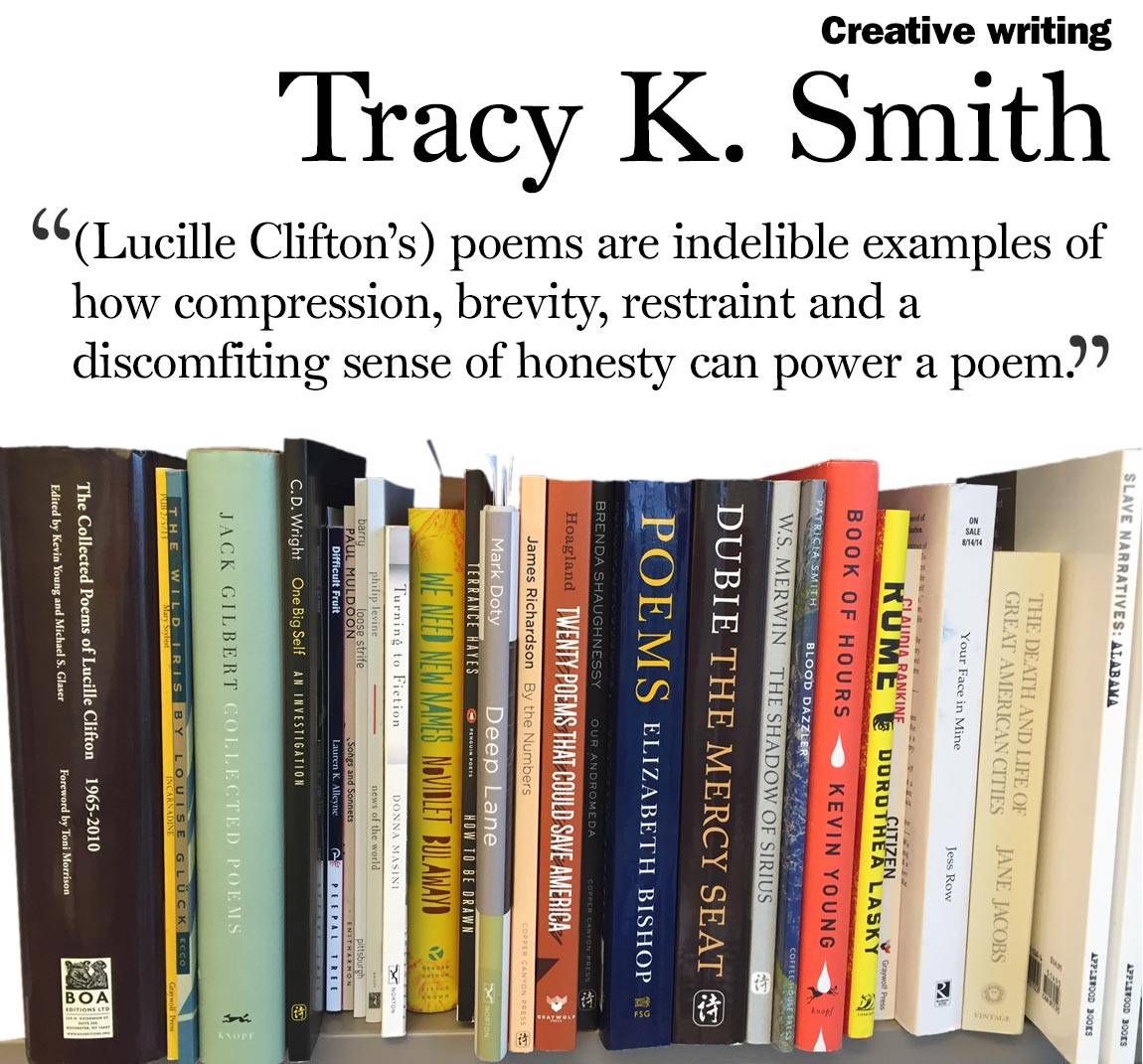 "The Collected Poems of Lucille Clifton" is a kind of bible for me. I began reading Clifton when I was a graduate student in her poetry workshop at Columbia University. There are so many ways of reading and applying these poems to a working practical philosophy about what it means to be human. Currently, I'm interested in thinking of Clifton as a writer with a concern for the environment. Her ability to touch upon this theme seamlessly, even in a poem whose chief preoccupations may be elsewhere, is enviable. 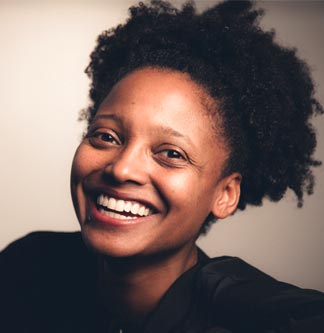 My last book of poems was concerned in part with what I came to think of as a mixture of the afterlife and the source or force that governs the universe, and her poem sequence, "Messages from the Ones," which speaks in chilling and prophetic clarity about the nature of our lives in the eternal scheme, was a beacon. I thought of the mind and the heart that had produced those poems, and I felt invited to gesture toward the large mystery as it lives in my own imagination. Now, as I reflect upon the ways that our nation continues to wrestle with the monsters of racial fear and hatred, Clifton's immense social conscience emboldens me to explore some of my own feelings, fears and beliefs on the page.

I often open my beginning-level poetry workshop with Clifton's spin on a phrase that has been used in various contexts over the years: "I write to comfort the afflicted and afflict the comfortable." And her poems are indelible examples of how compression, brevity, restraint and a discomfiting sense of honesty can power a poem. Her poem cycles, persona poems, and re-setting of particular histories and myths are also instructive to students.

I read mostly poetry during the academic year. This summer I hope to catch up on some prose, including Howard Norman's "I Hate to Leave This Beautiful Place," Adaobi Tricia Nwaubani's "I Do Not Come to You by Chance," Quan Barry's "She Weeps Each Time You're Born" and Nell Zink's "Mislaid."