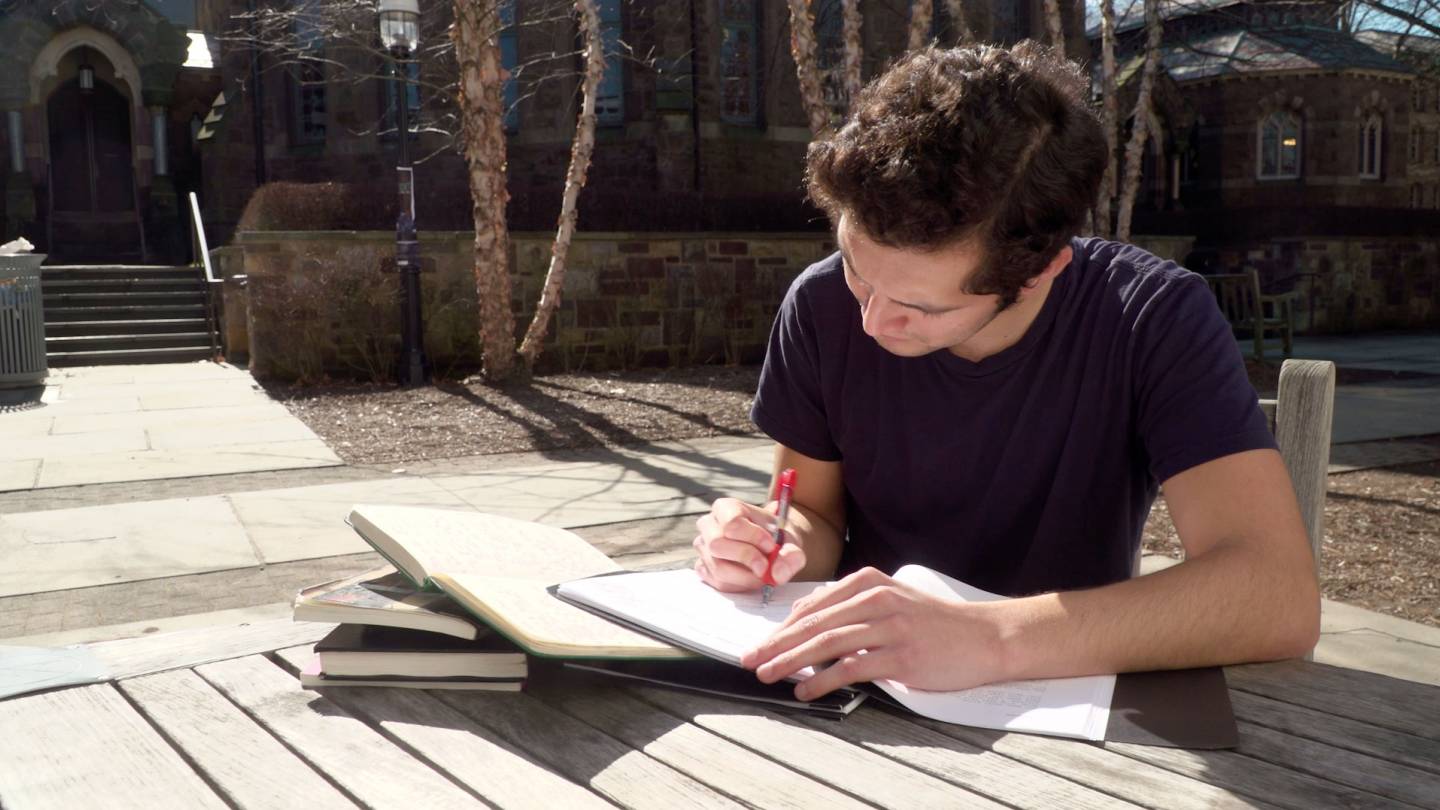 To meet the requirements of his major in English and certificates in creative writing, theater and Latin American studies, Princeton senior Edwin Rosales had to write not one but two senior theses. The first in his family to go to college, he drew on his own experience of coming to the U.S. from Guatemala as a child and on his extensive research to write a collection of short stories and a play. Rosales said the arts at Princeton empowered him and built his confidence as a writer.

Senior Edwin Rosales, a first-generation college student who emigrated from Guatemala with his parents when he was a child, drew on his own family stories and extensive research to write not one but two senior theses. The first, an original collection of short stories, "The Art of Stones," satisfied the thesis requirements for his major in English and certificate in creative writing. He also wrote a play, "Spring on Fire: A Guatemalan Story," for his certificates in theater and Latin American studies.

Princeton students must write a senior thesis or conduct an independent research project for their majors and certificates, and the creation of the thesis is considered a defining achievement in students' academic lives.

This video takes viewers through Rosales' creative journey, highlighting the challenges and rewards as he found his writer's voice and learned "to tell the stories that I feel need to be told about being a minority on this campus [and] in this country, and about being an immigrant, about feeling out of place, about searching, about figuring out identity."

Rosales said Princeton offered him numerous opportunities that supported the intensive work of researching and writing two theses. Last summer and again in January during intersession break, through funding provided by the University, Rosales traveled to Guatemala to talk with indigenous people who lived through a civil war and those who left during the war and came back. He spoke with people practicing the traditional Maya religion that is now in conversation with Christianity.

Also in January, a workshop reading of the first draft of "Spring on Fire" by Equity Latinx actors from New York City was funded by Princeton's Program in Latin American Studies and the Program in Theater, a rare opportunity for an undergraduate to have their new play-in-progress workshopped by professional actors.

In April, Rosales read an excerpt from "The Art of Stones" along with other seniors in a public reading from their fiction theses at Labyrinth Books in Princeton.

"Spring on Fire," set in 1982 during the Guatemalan civil war, follows a Maya family living in the highlands of Guatemala, the soldiers who occupy their village, and the spirits that guide and haunt them all. During the war, the national army carried out a genocide against the Maya people, who were believed to be supporting the guerrilla army in the mountains. The play focuses on a family in one rural village and begins with the invasion of the army, ending with the eventual massacre of its residents. In the play, the two worlds of this civil conflict converge, a Maya indigenous rural world contrasted with the military and Christian world from Guatemala City.

Rosales' father grew up in a small village of indigenous people outside Guatemala City and witnessed violent events similar to those depicted in the play. He saw some of his community leave the village to join both the national army and the guerrilla army. His mother grew up in Guatemala City, where Rosales was born, and saw the protests of the civil war firsthand.

In addition to the stories he heard growing up, Rosales read historical accounts and ethnographies, accounts that described the brutality of a violent genocide. The Maya religion relates strongly to the earth and the seasons, and the play features a spiritual character named Grandmother Moon, inspired by this tradition. Rosales also learned about the country's customs, how people dress, what they eat, and how they live in order to write an authentic world for the play. The play does not depict an actual village but is intended to create a window into that time in the country's history. Rosales was also partly inspired by the film "Ixcanul," which is set in a rural Guatemalan world post-civil war; the 2015 film was made in Guatemala in Kaqchikel, an indigenous Maya language that Rosales also includes in his play.

His story collection "The Art of Stones," Rosales said, "is inspired by my own family's story," as well as historical research on Guatemala during the civil war. "The characters in the collection emigrate from Guatemala to the United States but struggle to stay together as a family as they discover that the father has developed a drug and alcohol addiction problem in the new country," he said.

Rosales has always been interested in writing. He took his first creative writing class at Princeton in the spring of his sophomore year and then saw a production of a new play written by a theater senior, Annika Bennett's "Eyes Up High in the Redwood Tree," and wanted to try writing for the stage. He took a playwriting class in fall of his junior year and then an intermediate course with playwright Anne Washburn. He loved the craft of writing a play and being in a room with theater makers. He then took more theater classes including "Re:Staging the Greeks," which included a trip to Greece to study the Greek classics and visit the ancient sites where those plays were first performed, and a directing course with professional director Laurie Woolery.

In addition to his studies, Rosales works with Princeton High School students as an academic tutor and is a Lewis Center Committee on Race and the Arts peer mentor, encouraging underclassmen who may have questions or hesitation about becoming involved in the arts at Princeton. He has also worked as a college mentor and English as a Second Language tutor in Trenton. Next year, Rosales will be a fifth-grade English and language arts teacher in Huntington Park, California, through Teach for America.

Rosales said his time at Princeton built his confidence as a writer, and he plans to continue working on his short story collection and play long after graduation. "The arts here really empowered me. And I am leaving Princeton a different Edwin than I came in," he said.