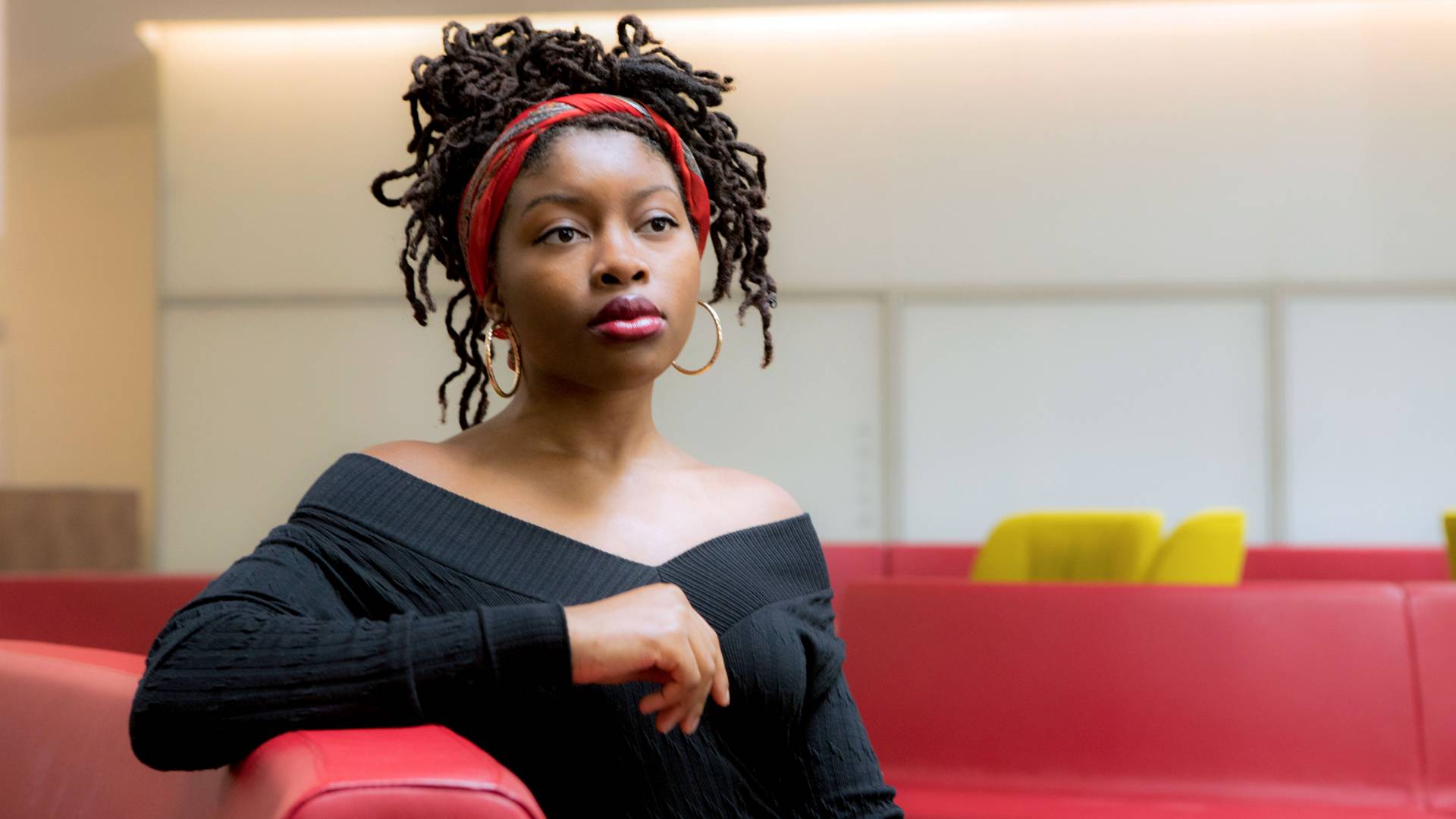 Princeton senior Ugonna Nwabueze, a first-generation Nigerian American, has undertaken two creative thesis projects — an original play and a production of the play "Eclipsed," in which she played a leading role — to meet the requirements for her English major and certificates in African studies, African American studies and theater.

Princeton senior Ugonna Nwabueze, a first-generation Nigerian American, grew up in Brooklyn, New York, but the stories her father told her about being a child soldier in the Nigerian civil war, which began in 1967, haunted her.

Her family history would influence one of her two senior thesis projects, a production of "Eclipsed" by Tony Award-winning playwright Danai Gurira, for which Nwabueze researched, produced and played a leading role.

"Eclipsed" follows five Liberian women during the second Liberian civil war —  the captive wives of a rebel officer who form a fragile community in a dilapidated, one-bedroom shack. Gurira based the script on interviews she conducted with Liberian women. A note from Gurira at the top of the published script states the importance of research to anyone who produces the play — Nwabueze took those words to heart.

Nwabueze's development of the production of "Eclipsed"— which included an unforgettable trip to West Africa to conduct interviews of her own — is for her certificates in theater and African studies. For her senior thesis requirement as an English major, as well as for her certificate in African American studies, Nwabueze is writing a play set in New Orleans about the experiences of three black women in the 1800s.

"Eclipsed" follows five Liberian women during the second Liberian civil war — the captive wives of a rebel officer who form a fragile community in a dilapidated, one-bedroom shack. In this scene, Nwabueze (left) — in the role of The Girl, a 15-year-old — speaks with Helena (sophomore Ozichi Okorom) in the dilapidated, one-bedroom shack they share.

Nwabueze's research has illuminated her path in theater. Key steps in that journey are outlined below.

January 2017. During winter break, Nwabueze read through numerous plays. When she encountered "Eclipsed," she said she "had a visceral reaction."

"'Eclipsed' felt very familiar because although I am not Liberian and don't purport to have experienced an African civil war, the blood memory from my father's experiences in Nigeria pulse through me," she said.

Nwabueze had never acted before coming to Princeton but "fell in love with theater-making" her first year, when she appeared in "For Colored Girls" produced by the Black Arts Company Drama. She is now president of the student-led troupe and volunteers as a drama teacher for junior high school students. She has appeared in more than a dozen productions at Princeton. She has taken courses in directing, acting and theater history.

February 2017. Edwin Rosales, a friend and member of the Class of 2017 who wrote and produced an original play for his senior thesis about his family roots in war-torn Guatemala (in which Nwabueze appeared), invited her to Yale University to see an undergraduate production of "We Are Proud to Present." The play, by Jackie Sibblies Drury, is about actors gathering to present a past genocide in Namibia at the turn of the 20th century.  It was directed by Shariffa Ali, a New York-based director whom Rosales knew.

"'We Are Proud to Present' is such a complex play both in its nature and structure, and Shariffa handled it with such care and mastery," Nwabueze said. "I thought maybe she'd be willing to direct 'Eclipsed.'" Ali happened to be at the performance and they met. "We connected instantly," Nwabueze said. "I asked Shariffa, if 'Eclipsed' was approved, would she do me the honor of directing it. Within five minutes, we realized we had the same priorities," she said. 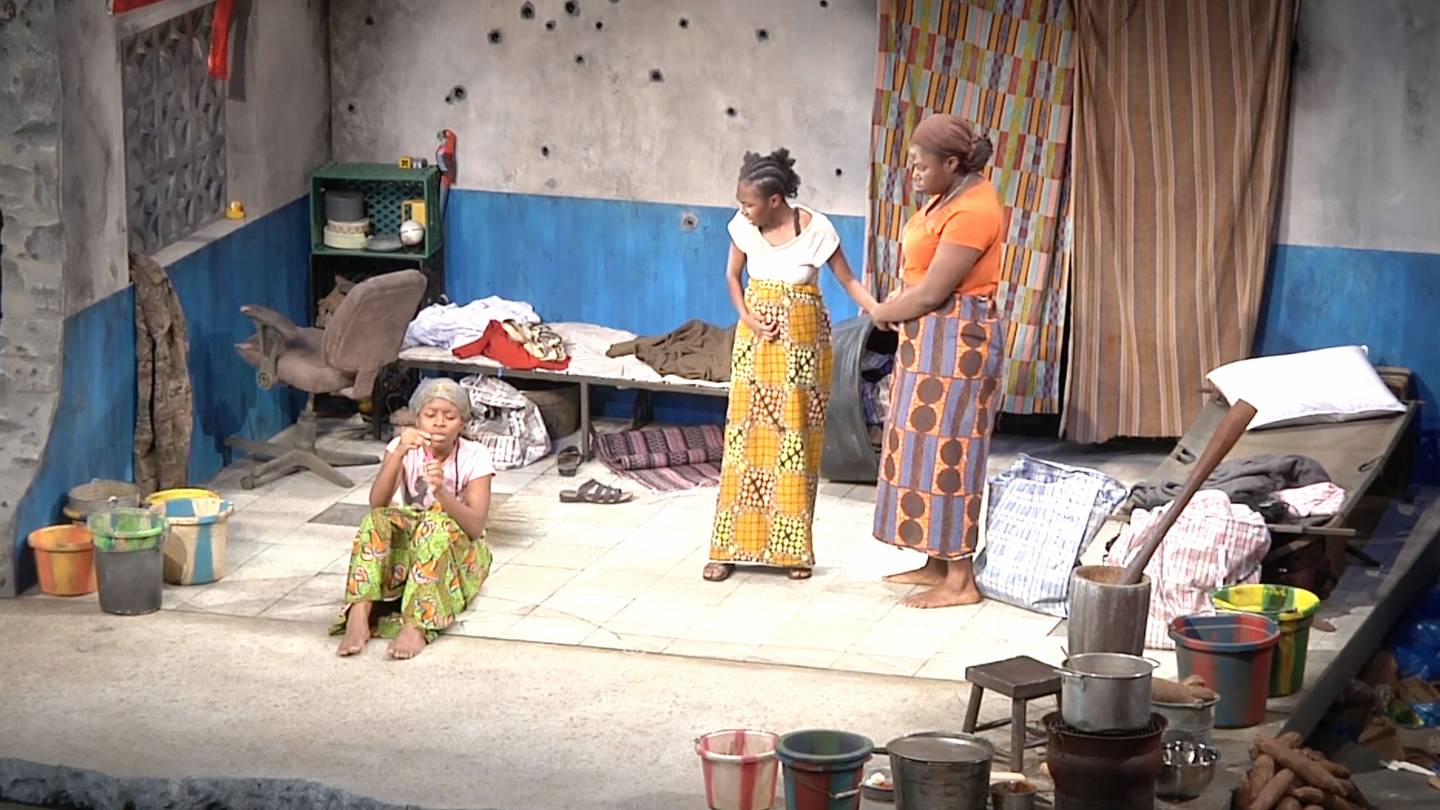 In this scene excerpt from "Eclipsed," senior Ugonna Nwabueze, sophomore Mofopefoluwa Olarinmoye and sophomore Ozichi Okorom exchange a rare moment of humor against the backdrop of their dire living conditions as captive wives of a rebel officer during the second Liberian civil war.

March 2017. Nwabueze submitted her proposal for "Eclipsed" to the Program in Theater. It included a statement by Ali, who was born in Nairobi to Kenyan and Ethiopian parents and was schooled in traditional African theater. "It was the coolest thing because I already had a director who was really passionate about the project who was available," Nwabueze said.

April 2017. After a round of interviews with theater faculty, Nwabueze learned that her "Eclipsed" proposal had been approved. As the spring semester progressed, she applied for summer funding to do research.

Summer 2017. With funding from an Alex Adam Award through the Lewis Center for the Arts, Nwabueze traveled to Buduburam, a refugee camp west of Accra, Ghana, that serves as home to thousands of Liberians, many of them refugees from the first and second Liberian civil wars. In her junior year, Nwabueze began taking courses at Princeton in Twi, a dialect spoken in Ghana, with Hannah Essien, a lecturer in Princeton Institute for International and Regional Studies. Nwabueze conducted and videotaped interviews with many of the residents there.

While in West Africa, with funding from an A. Scott Berg fellowship from the Department of English, she also visited two colleges to study West African theater: Fourah Bay College in Freetown, Sierra Leone, and the University of Ghana in Accra. In Accra, she also conducted interviews at the United Nations High Commissioner for Refugees headquarters.

September 2017. Casting and rehearsals began. Nwabueze chose to be "The Girl," a 15-year-old who joins the tiny community of women after being abducted by the officer.

"I chose The Girl because she was the role that scared me the most and would give me the challenge that I needed," Nwabueze said.

She was assigned an acting adviser, Elena Araoz, a lecturer in theater and the Lewis Center for the Arts, who acts professionally and is a stage director. Araoz attended many rehearsals and worked with Nwabueze one on one. 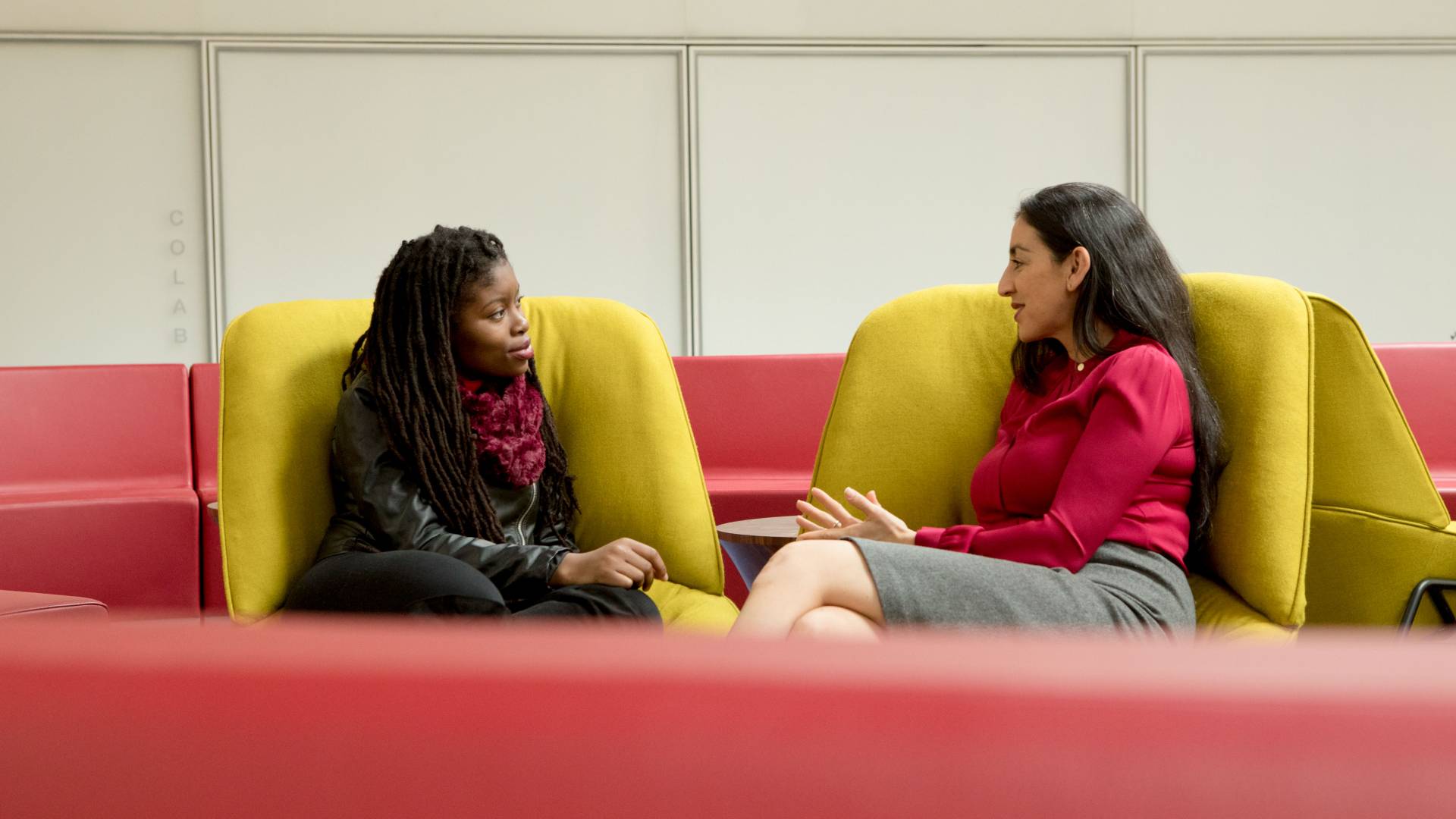 Nwabueze and Elena Araoz (right), a lecturer in theater and the Lewis Center for the Arts who served as Nwabueze's acting adviser, enjoy a conversation in the Forum of the new Lewis Arts complex.

December 2017. The week of the show's opening, Nwabueze said she hit a wall in her portrayal of The Girl. She phoned Araoz.

"I told her, What makes youthfulness?" Araoz said. "It's not the way you walk or talk or how you look. It's the way in which you view the world."

"We tapped into Ugonna's political thoughts and feelings, along with her own coming-of-age experiences, to help make her feel one with this character," she said. "In this way of sculpting Ugonna’s worldview, she could craft the young and innocent girl at the beginning of the play, and by the end of the play, she could craft a character who had lost that innocence. There is not a more heart-wrenching event for an audience to witness than the loss of innocence." 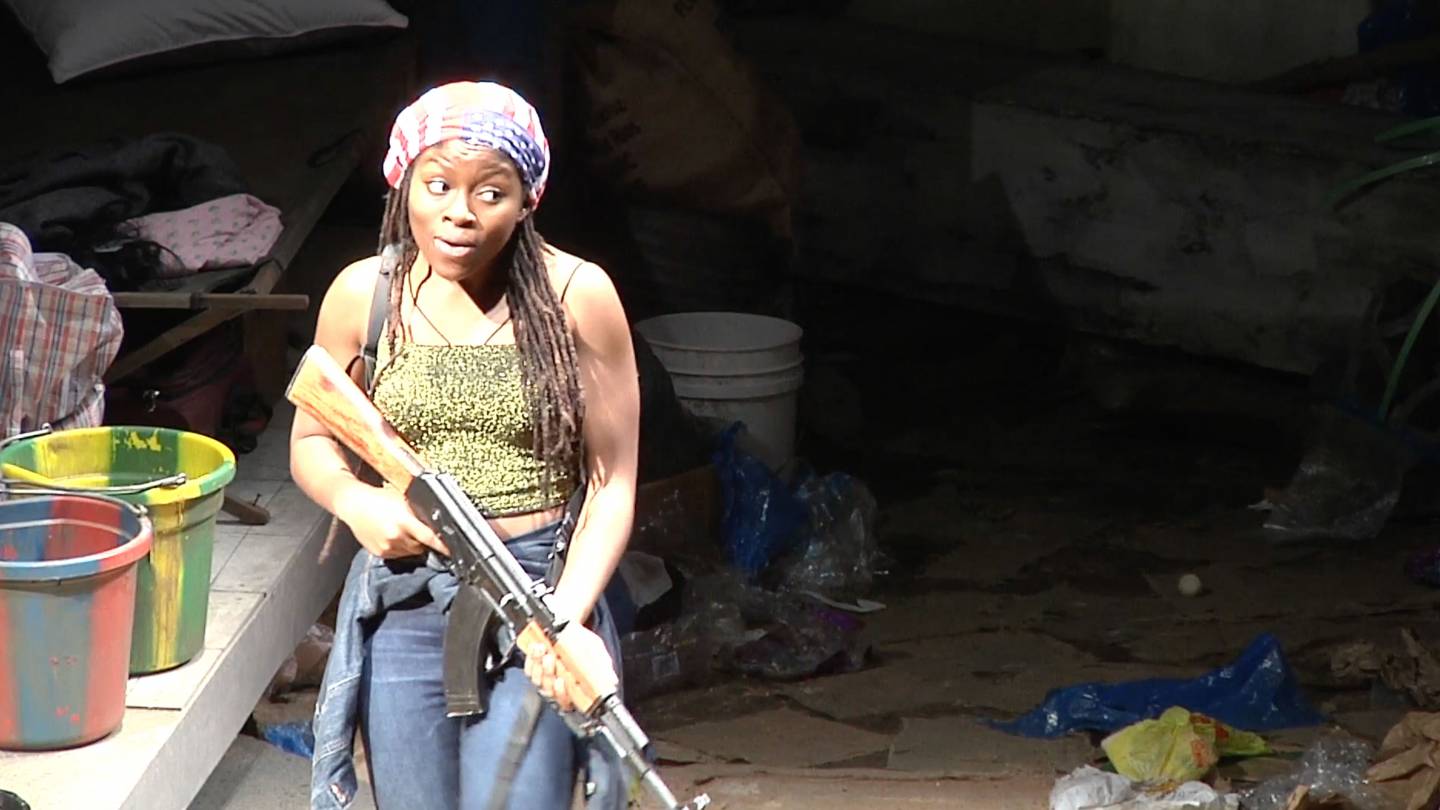 In this monologue excerpt from "Eclipsed," Ugonna Nwabueze, playing the role of The Girl, a 15-year-old, experiences a newfound sense of power when she joins the rebel forces.

Araoz commended Nwabueze as "fearless" in her acting and in her goals as a theater artist.

"Acting in such a play is very different than proposing a thesis and putting in the labor to make it happen. Acting requires vulnerability, suppleness of heart, nuance, instinct and subtlety — very different skills than go-getting. Ugonna can do both," Araoz said.

Nwabueze said that her research — including the interviews she videotaped in Ghana — supported the actors in the development of their characters and informed the set, costume and lighting design by New York professionals You-Shin Chen, Ntokozo Kunene and Alex Mannix, respectively.

"The physical world was so well crafted that when you were acting on the stage you lost yourself in it," she said. "After every show it would take hours to come out of character because for three hours you were in war-torn Liberia fighting for your existence."

As the production took shape, Nwabueze also continued work on her play, "The Red-Light District, which she wrote after a research trip to New Orleans in summer 2016, funded by another A. Scott Berg award. The play captures the relationship between black women and the world while exploring the role of race, gender and abuse, Nwabueze said. She is expanding the play, which will have a workshop performance with student actors this spring, for her second senior thesis. In fall 2016 and spring 2017, the Program in Theater held staged readings of earlier drafts, so that Nwabueze could hear and observe how the play sounded.

"Ugonna's writing is vivid and powerful," said her adviser Robert Sandberg, a lecturer in English, theater and the Lewis Center for the Arts, who is himself a playwright.

Nwabueze, whose experience is detailed on her website, said her senior thesis work helped her make important discoveries about becoming a theater artist. 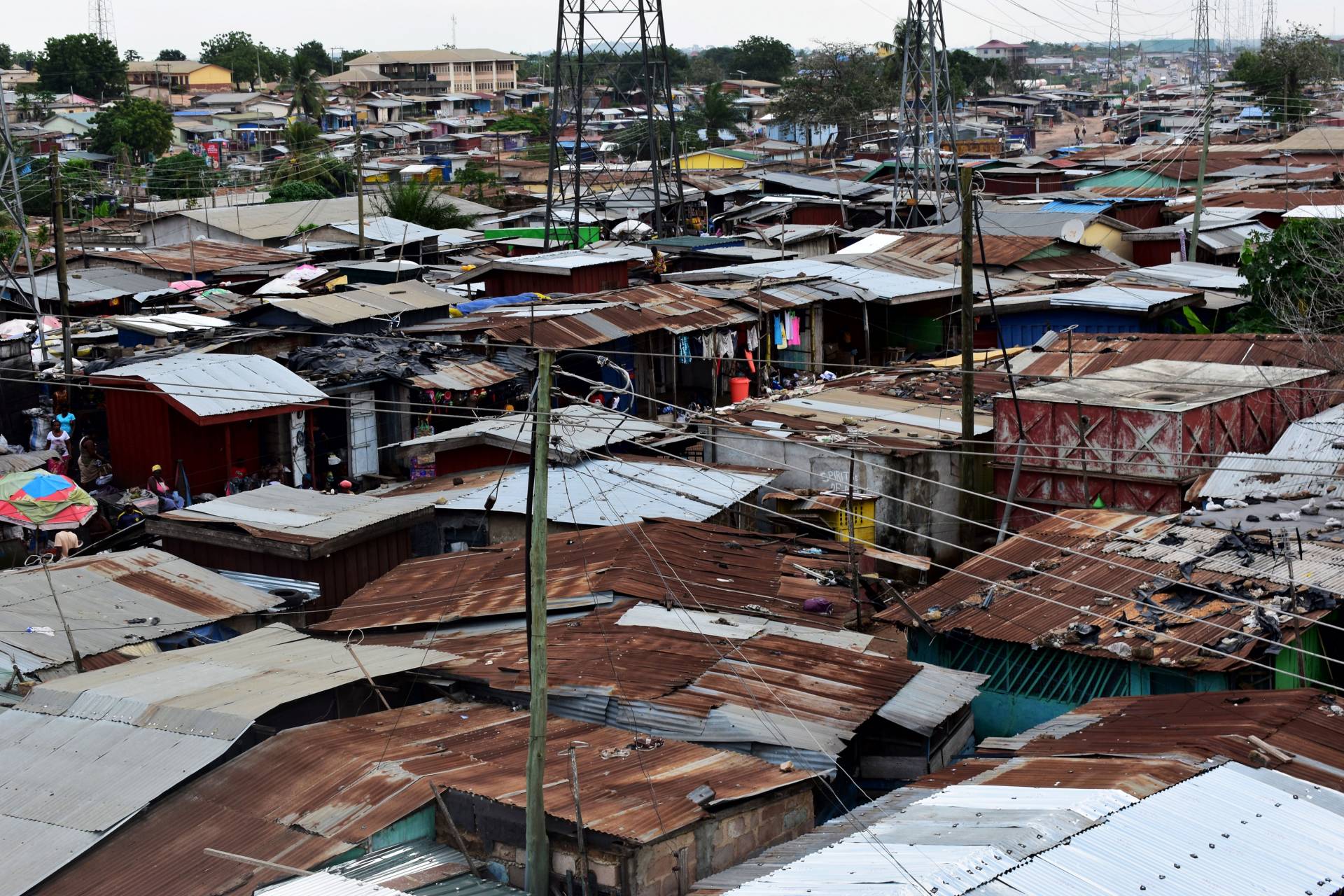 As part of her research for "Eclipsed," Nwabueze traveled to Buduburam — a refugee camp west of Accra, Ghana, that serves as home to thousands of Liberians — where she conducted and videotaped interviews with several residents.

Photo by Ugonna Nwabueze, Class of 2018