"An academic home in Greece embodies some of the key goals of the Stanley J. Seeger Hellenic Fund, established in 1979," said Dimitri Gondicas, founding director of the Seeger Center and a 1978 alumnus. "Creating the Princeton Athens Center was consistent with the vision of our benefactor, Stanley J. Seeger '52, whose legendary generosity made it possible for Princeton to be a world leader in Hellenic studies." Every year, the Seeger Center for Hellenic Studies supports more than 100 Princetonians for study and research in Greece, said Gondicas. 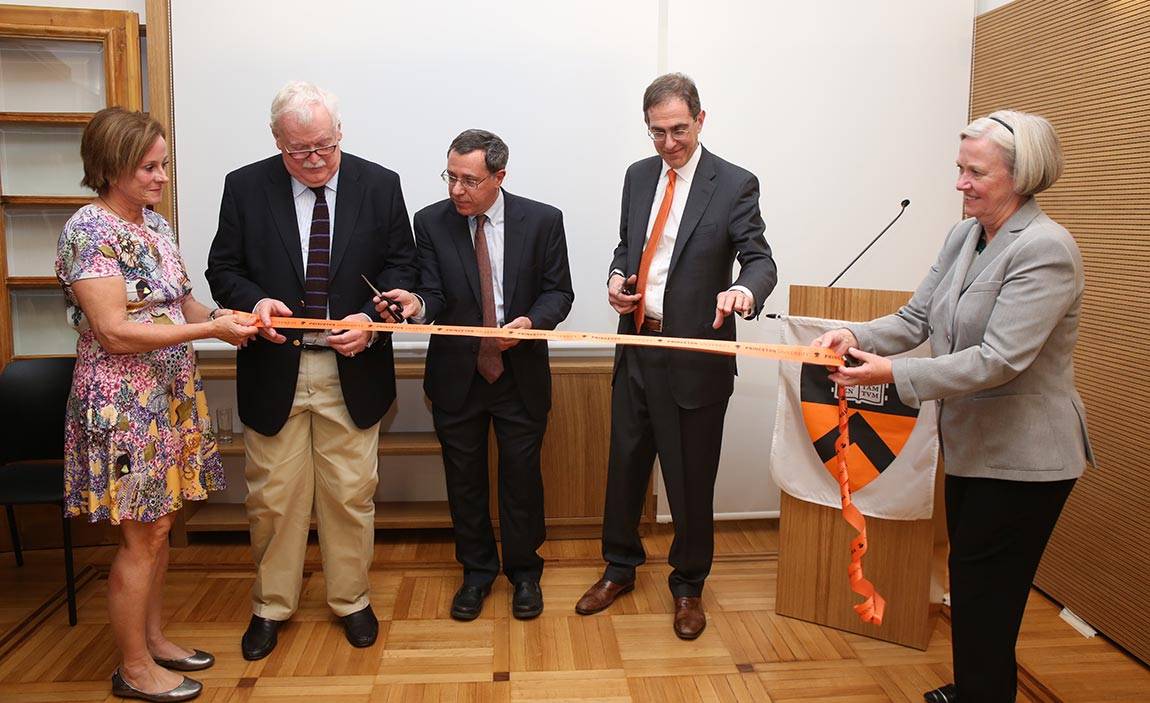 At an evening reception at the new center, Gondicas opened his remarks in Greek: "Kalos orisate! Welcome! … Princeton has enjoyed strong, enduring links with the Hellenic world, and it has been an international leader in the study of Greek culture. As scholars, educators, philanthropists, public servants, business people, art collectors and writers, Princetonians have contributed immensely to the cultural and international relations between Greece and the United States."

Princeton President Christopher L. Eisgruber participated in the ribbon-cutting ceremony and greeted the 55 guests including faculty, students, friends, and more than 30 undergraduate and graduate alumni spanning more than 50 years.

"This is the first time Princeton University has opened a research and scholarship center anywhere outside of the United States," said Eisgruber, Class of 1983. Acknowledging the "extraordinary generosity and vision" of Seeger's gifts and the gifts of many alumni attending the reception, Eisgruber said that one of the reasons the University chose to establish the center in Athens "as we become a more international university" is Princeton's "extraordinary humanistic tradition that finds its home here in Athens and in Greece."

He said these alumni gifts ask the University "to build upon the study of ancient and modern Greece and to do so in a way that understands the broad influence of Greece in the world. As we seek to make this enterprise succeed ... we will depend on our connections here in Greece to make this a thriving hub of activity."

The center — located in the Stanley J. Seeger '52 House, a 1930s-era townhouse in downtown Athens renovated by Nasos Antachopoulos and Yannis Younis of Athens-based A6Architects — features conference facilities, a seminar room, offices, study spaces, informal common areas and a terrace with a view of the Parthenon in the distance. Situated down the street from Aristotle's Lyceum in a historic, diverse neighborhood, the center is close to libraries, museums and archaeological sites.

Earlier in the day, Eisgruber toured the facility; met with Seeger trustees, Princeton faculty and staff; and took a guided visit of the Acropolis Museum.

The reception included remarks by Seeger Trustee Peter R. Brown, the Philip and Beulah Rollins Professor of History, Emeritus, on behalf of the Seeger family, and a performance by Nikos Michailidis, a native of Greece and 2016 graduate alumnus in anthropology and Hellenic studies, who sang a Greek folk song that he composed for this occasion, accompanied by the pontic lyra. 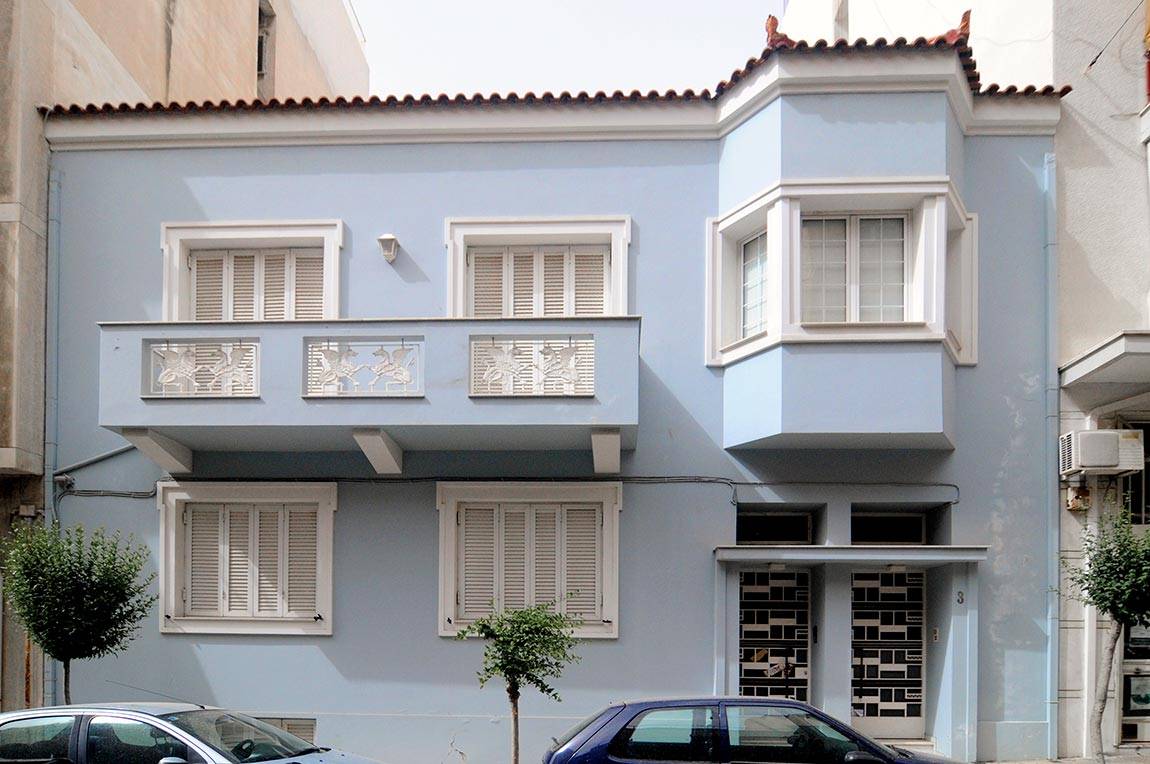 The center — located in the Stanley J. Seeger '52 House, a 1930s-era townhouse in downtown Athens renovated by Athens-based A6Architects — features conference facilities, a seminar room, offices, study spaces, informal common areas and a terrace with a view of the Parthenon in the distance. (Photo by Yannis Stathopoulos)

Also attending were Christopher Cone, president of the Stanley J. Seeger Hellenic Fund; Shirley M. Tilghman, emerita president of the University and professor of molecular biology and public affairs; Anastasia Vrachnos, vice provost, international affairs and operations and a 1991 alumna; and Kathleen Crown, executive director of the Council of the Humanities.

"Thanks to Dimitri Gondicas and his inspired colleagues, this research center will continue to inspire a new generation of students and scholars," Tilghman said.

Gondicas added that the Princeton Athens Center is designed to extend international opportunities across academic disciplines. "We have strong interest on the part of colleagues in the natural sciences and engineering to be part of this new venture, so they can engage actively with their counterparts and students in Greece."

On the morning of Nov. 2, Benjamin Morison, professor of philosophy, led a "research-in-progress" precept with 11 Princeton sophomores who had taken the team-taught yearlong Humanities Sequence (HUM) — which covers 2,500 years of Western culture from Homer to Virginia Woolf — their freshman year. First-year students who have completed the course may apply to travel to Greece or Rome during fall break of their sophomore year, fully funded by the University. Nicolette D'Angelo, a member of the Class of 2019 and a HUM sequence "alumna," shares her account of her experience visiting Greece this week on Princeton's Instagram.

After lunch at a neighborhood restaurant, the students had a guided tour of the National Archaeological Museum. The activities continued with an evening of music at the center, cosponsored by the Princeton Club of Greece, featuring traditional songs of Greece and Asia Minor.

Learning from the Hellenic world: Ancient, medieval and modern

Opportunities for Princeton students to study and conduct research in Greece range from an archaeological excavation in northern Greece to PIIRS Global Seminars focused on history and theater.

Michael Cadden, chair of Princeton's Lewis Center for the Arts, has twice co-taught "Re:Staging the Greeks," crosslisted in theater and Hellenic studies, with a spring break trip to Greece. In summer 2012, he co-taught the course as a six-week PIIRS Global Seminar, which he will teach again in summer 2017. 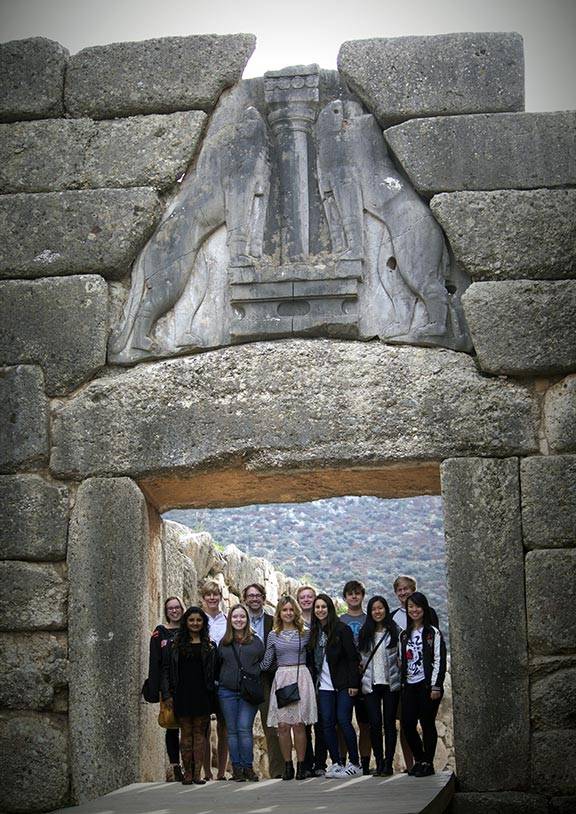 Among the guests in Greece for the center's opening festivities were 11 Princeton sophomores — pictured here at the "Lion Gate" entrance to Mycenae with Benjamin Morison, professor of philosophy — who had taken the team-taught yearlong Humanities Sequence their freshman year. First-year students who have completed the course may apply to travel to Greece or Rome during fall break of their sophomore year, fully funded by the University. (Photo by Aristotle Koskinas, the group's guide in Greece)

"I love the idea of having a Princeton home base in Athens to help center our activities and to encourage contact with other Princeton faculty and students pursuing projects in Greece," Cadden said. "And we'll be able to invite our Greek friends over to our place. The Greeks take hospitality very seriously!"

Edwin Rosales, a senior who is majoring in English and earning certificates in theater, creative writing and Latino studies, took "Re:Staging the Greeks" last spring. He is writing a play as one of his two senior theses and said, "I would not have been as inspired as I am now to take risks in my pieces, and to try to find the human passion and raw feeling of joy in every moment I put on stage, if I had not visited Athens and learned about how the people of Athens find this joy, passion and opportunities to take risks and enjoy life as they do."

Christian Wildberg, a professor of classics and director of the Program in Hellenic Studies, last summer taught a PIIRS Global Seminar "Culture and Counterculture in Ancient Athens," crosslisted in classics and Hellenic studies, and said he was astonished at how much students can accomplish in Greece in just six weeks. "The most amazing thing was the final papers that my students submitted a few weeks after returning from Athens," Wildberg said. "Topics ranged from mythology and pre-Socratic philosophy. . . and ended with discussions of the rise of Christianity. Reading those papers in all their fascinating diversity was almost as much of a tour de force as the seminar itself."

Sahand Keshavarz Rahbar, a senior who is majoring in history, first visited Greece in fall 2014 as part of the course "The Apostle Paul in Text and Context," taught by AnneMarie Luijendijk, professor of religion. "As a historian, I am often struck by the idea of the ineffable — those sights and sounds that escape description," he said. "Study abroad provides students with the opportunity to capture those senses, to more fully envision the particulars that eluded their understanding when reading a hefty textbook or journal article."

Rahbar returned to Greece two more times — in summer 2015, for an internship at the Stavros Niarchos Foundation in Athens and to participate in the PIIRS Global Seminar "Thessaloniki: 2,000 Years of a City in History," taught by Molly Greene, professor of history and Hellenic studies and a 1993 graduate alumna who attended the center's opening reception; and in summer 2016, to volunteer at a refugee camp, all funded in part by the Seeger Center for Hellenic Studies, with the support of The Paul Sarbanes '54 Fund for Hellenism and Public Service. "My trips allowed me to become a part of history, and to gain an intimacy with past events that I could never achieve in a classroom, thousands of miles away," he said.

Senior Claire Ashmead, who is concentrating in history and earning certificates in humanistic studies, East Asian studies and creative writing, traveled to Greece over fall break 2014 after taking the HUM sequence, which she said was like a pilgrimage in learning about "the origin of Western culture." As part of that trip, she also completed an independent project on the 20th-century Greek artist, writer and scholar Nikos Hadjikyriakos-Ghika, with funding the David A. Gardner '69 Magic Project in the Humanities Council.

In partnership with Hellenic studies, the Council of the Humanities hosts faculty-led trips to Greece and organized Princeton's first journalism seminar abroad last summer, called "Reporting on the Front Lines of History — in Greece."

Hayley Roth, a senior who is majoring in the Woodrow Wilson School of Public and International Affairs, participated in that course, in which students honed on-the-ground reporting skills while covering the refugee crisis and meeting with journalists. "The course posed the thrilling challenge of frontline global reporting, which I never dreamed of experiencing as an undergraduate," Roth said.