Editor's note: This feature on a journalism seminar in Greece is Part 2 of a two-part series focusing on two new study abroad courses Princeton offered this summer. Part 1 introduces Princeton's first PIIRS (Princeton Institute for International and Regional Studies) Global Seminar in France, in which students immersed themselves in the rich tradition of French theater. Discover more about international opportunities for Princeton students at "Learning Across Borders," a student showcase with posters, performances, videos, blogs and artwork, 1 to 4 p.m. Saturday, Sept. 24, at Whitman and Butler colleges.

This summer, Iris Samuels, a member of the Class of 2019, visited the Benaki Museum in Athens with a couple of unexpected guests: two teenage refugees from Afghanistan.

Samuels and five other Princeton undergraduates met the boys during their first week of the course "Reporting on the Front Lines of History — in Greece." The seminar, part of the Ferris McGraw Seminars in Journalism, was the first overseas journalism course Princeton has offered. 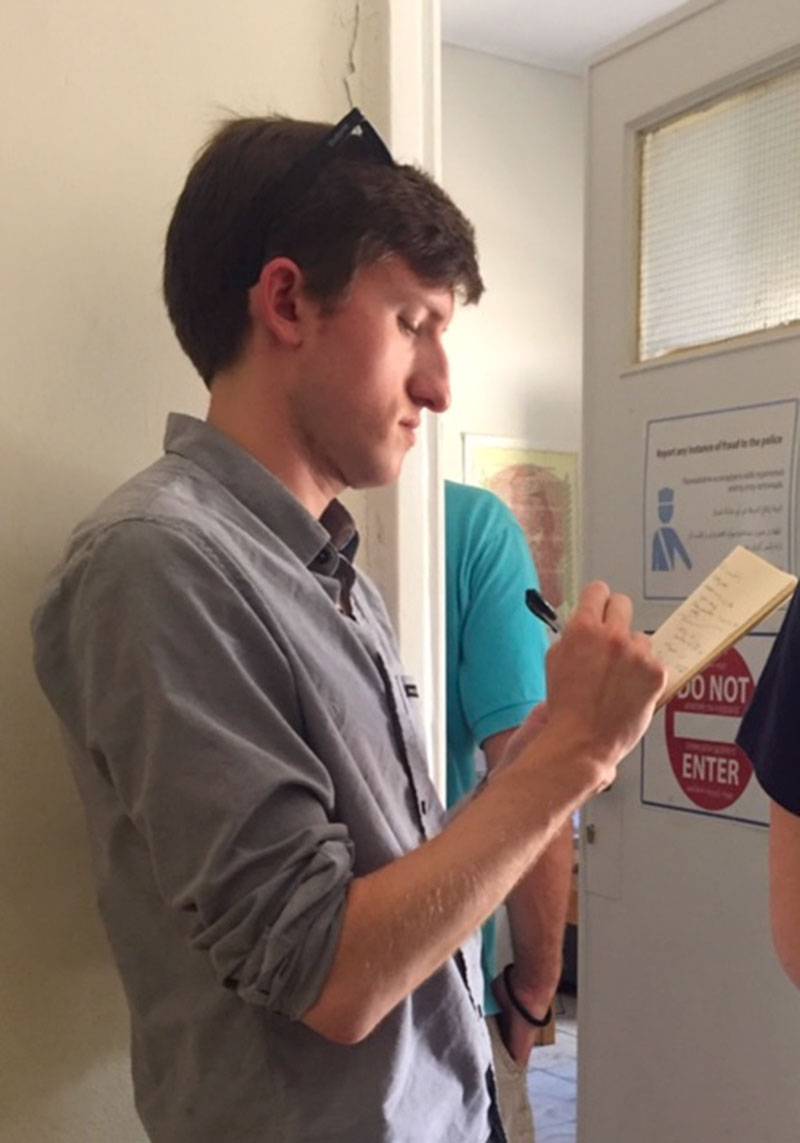 This summer, six Princeton undergraduates participated in Princeton's first journalism seminar abroad, honing their on-the-ground reporting skills as they experienced the refugee crisis in Athens and on the island of Lesbos. Above: Harrison Blackman, a member of the Class of 2017, takes notes on the signage of the main office of Schisto, a refugee camp outside of Athens. (Photo by Kathleen Crown, Council of the Humanities)

"Notebooks and cameras in hand, the students spent five weeks in Athens and on the island of Lesbos, learning and employing the same critical thinking skills that the world's most accomplished foreign correspondents use to cover chaotic world events — in this case, an unprecedented surge of refugees into a region already reeling from a debt crisis," said Joe Stephens, the Ferris Professor in Residence and investigative projects reporter for The Washington Post, who led the course.

"We met [the boys] in their home at a shelter for unaccompanied minors," Samuels said. "It was our last stop after a very long day of visiting refugee camps, and everyone was exhausted. But these two boys captivated our attention. They were eager to share their story."

Relaying the experience in a post on the class blog "Borderland," Samuels wrote that the boys "fled Afghanistan early this year because, they said, staying would risk pressure from ISIS or the Taliban to join their causes. They are part of a contingent of refugees younger than 18 who have journeyed to Greece all alone."

When the boys heard the Princeton students were taking a tour of the museum, they expressed interest in joining the group. "This experience illustrated to me how even though these two young people have been through so many challenges I can hardly fathom, they are still just regular people with a desire to learn about the world," Samuels said.

Along with trips to the Parthenon and the Agora, the museum visit was designed to help the students explore the history of asylum, refuge and sanctuary as philosophical concepts in ancient cities. 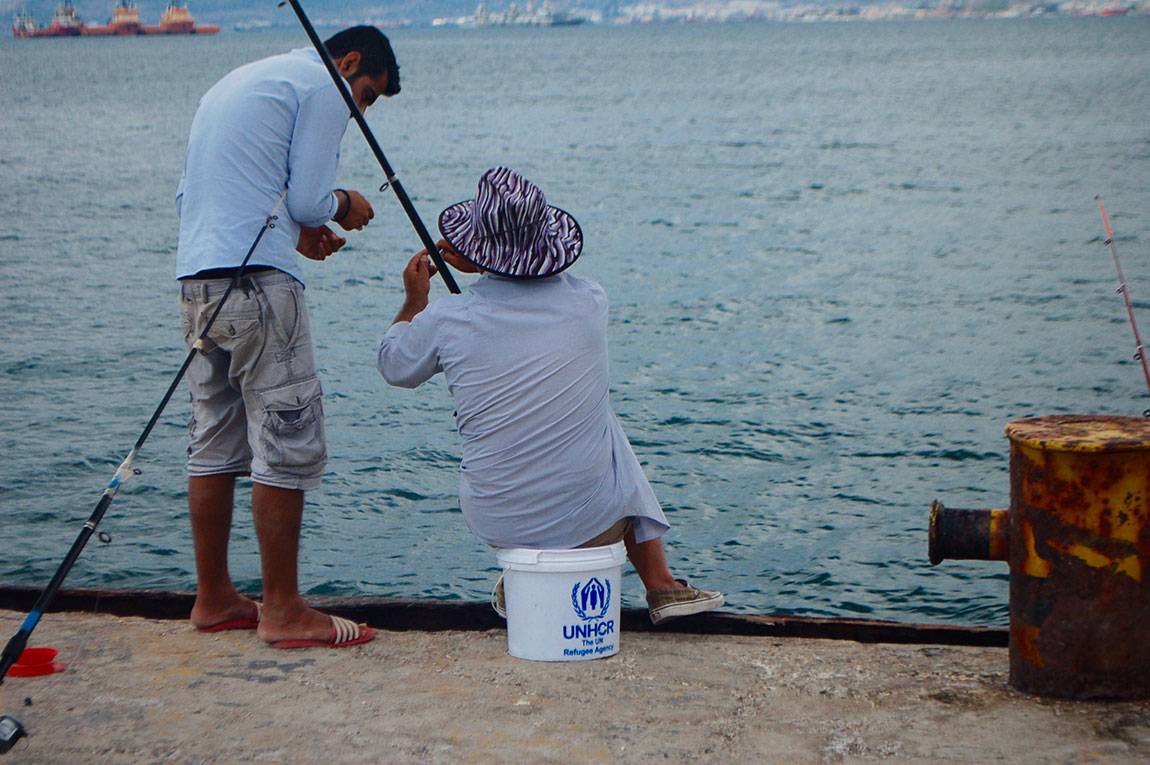 In their first week, students began visiting refugee camps near Athens. Above: Two men fish outside the Skaramangas refugee camp. (Photo by Iris Samuels, Class of 2019)

Stephens — a three-time winner of the George Polk Award, which recognizes outstanding investigative reporting — said that unlike some traditional seminars, neither the syllabus nor the itinerary was rigid. "Our schedule was designed to be fluid and rapidly changing in reaction to events on the ground — just as it would be for any foreign correspondent working in the field," he said.

Students spent mornings participating in lectures on field reporting from Stephens and guests, including foreign correspondents Joanna Kakissis, the Athens bureau chief for NPR News, and Griff Witte, the London bureau chief for The Washington Post. Visitors also included anthropologists, aid workers and scholars of Hellenic studies who discussed histories of migration, exile, diaspora and displacement in the region.

In the afternoons, students grabbed their notebooks and cameras and, working in pairs, fanned out on the hunt for stories, Stephens said.

"Most class time consisted of our student journalists sharing their successes from the field over the previous 24 hours, and then brainstorming with our team's 'hive mind' about what to investigate — and how — over the next 24 hours. It was exhilarating," Stephens said, adding that each student was also required to identify one "compelling and important story" to pursue for the duration of the seminar. 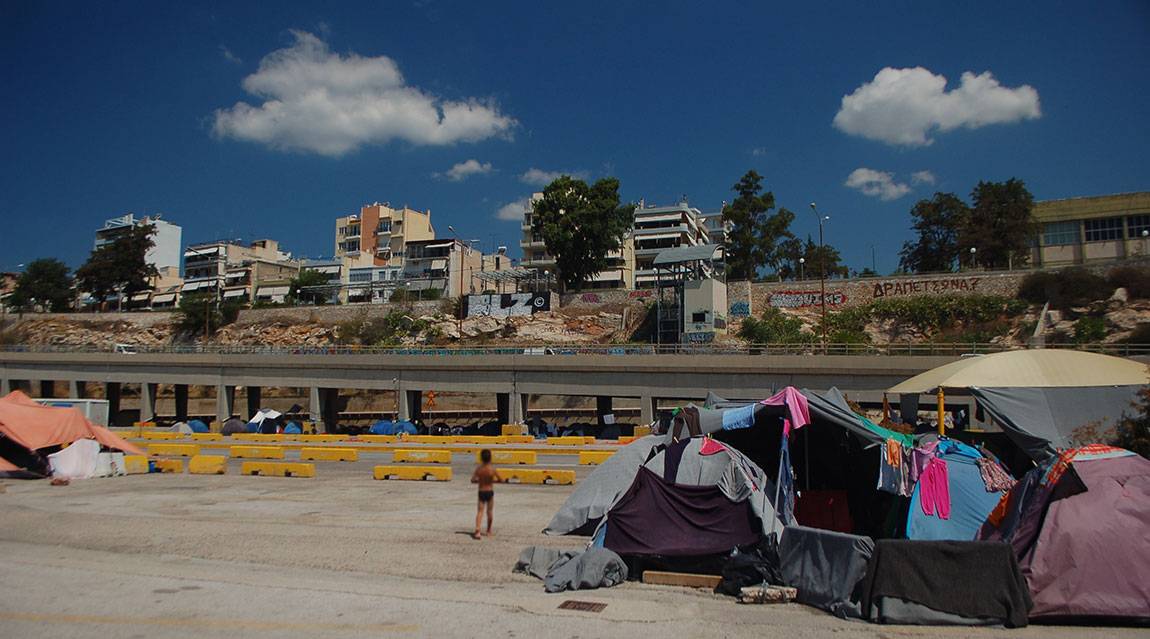 Students spent mornings in class participating in lectures on field reporting and in the afternoons, fanned out in pairs, notebooks and cameras in hand. Above: A makeshift refugee camp in the Port of Piraeus near Athens. (Photo by Iris Samuels, Class of 2019)

Hayley Roth, a member of the Class of 2017 who is majoring in the Woodrow Wilson School of Public and International Affairs, said the skills she learned during the morning classes played a critical role when she and her reporting partner went out in the afternoons.

"It can be difficult to pursue interviews with refugees without a translator, so Professor Stephens advised us to seek out organizations and camp areas where refugees who speak English might congregate," Roth said. "My reporting partner and I sat in on an English class in Ritsona, a refugee camp north of Athens, and waited to talk to students. We eventually had a wonderful chat with a young woman from Iraq who had been learning English for just two months and was already able to express herself capably."

Roth, who is interested in applying to law school and journalism school and is the head investigative reporter for the student-run WPRB's news and culture desk, has taken three journalism courses at Princeton. She was in the midst of writing her second junior paper, which was on the European refugee crisis, when she heard about the Greece seminar.

"The course posed the thrilling challenge of frontline global reporting, which I never dreamed of experiencing as an undergraduate," said Roth. 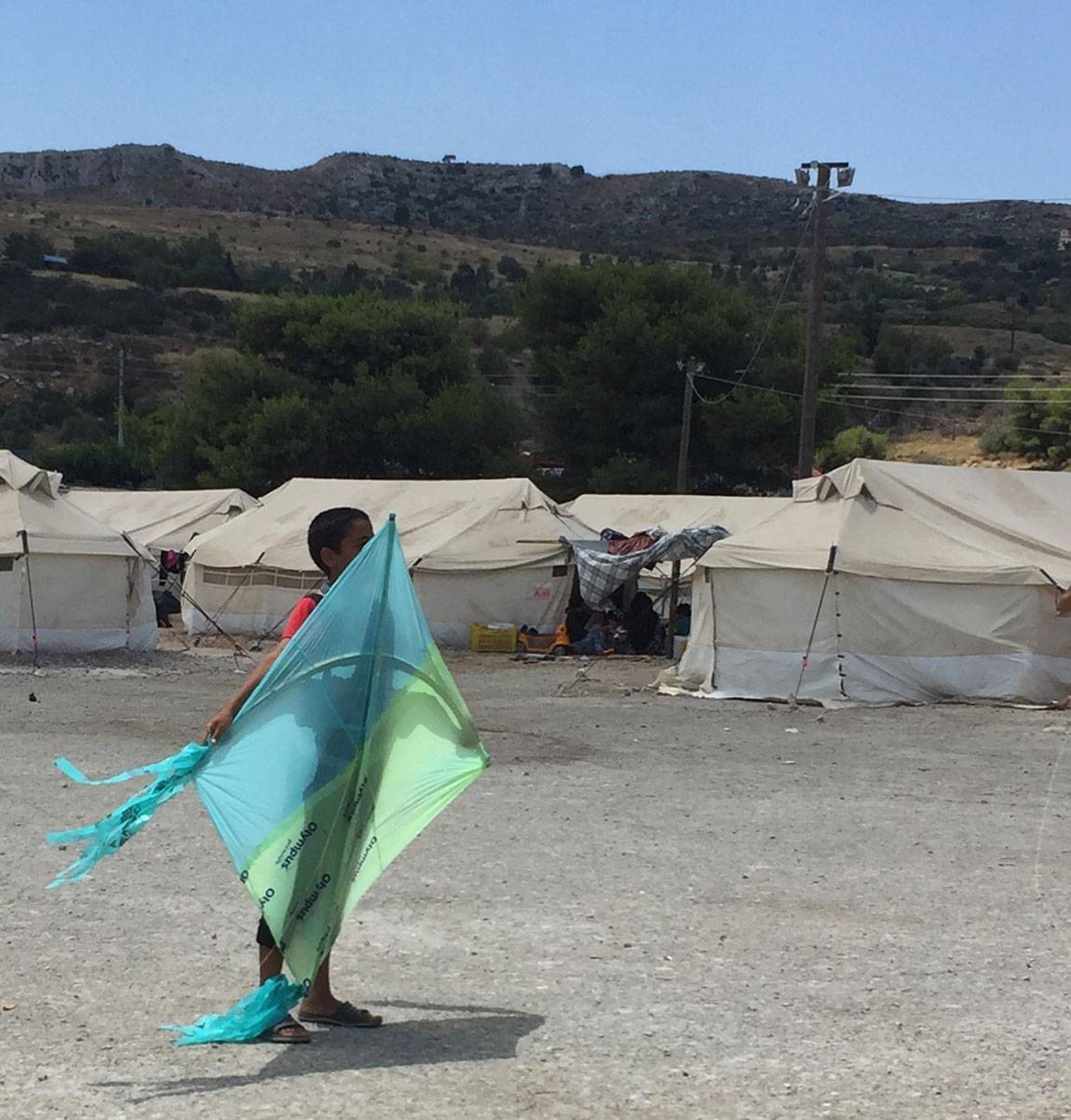 An Afghan boy plays with a kite at the Schisto camp, near Piraeus. (Photo by Ally Markovich, Class of 2017)

A critical component of the seminar's success, said Stephens, was the on-the-ground help from Pavlos Zafiropoulos, a Greek journalist. "Pavlos drew on his deep local knowledge, contacts and street smarts to increase our reporting efficiency," Stephens said. "He was able to quickly win us access to places and to people — including camp commanders and government officials —that otherwise could have taken much longer."

Roth, whose final project focused on the education of refugees, said Zafiropoulos was instrumental in helping her obtain an interview with the General Secretary to the Ministry of Education Yannis Pantis. Roth also interviewed NGO workers and refugees, including parents, young adults and unaccompanied minors.

Zafiropoulos also helped organize logistics in the months leading up to the course, together with Stephens and Kathleen Crown, executive director of the Council of the Humanities, which is home to the Ferris McGraw Seminars in Journalism and co-sponsored the course with the Seeger Center for Hellenic Studies. Additional support came from the Paul Sarbanes '54 Fund for Hellenism and Public Service. 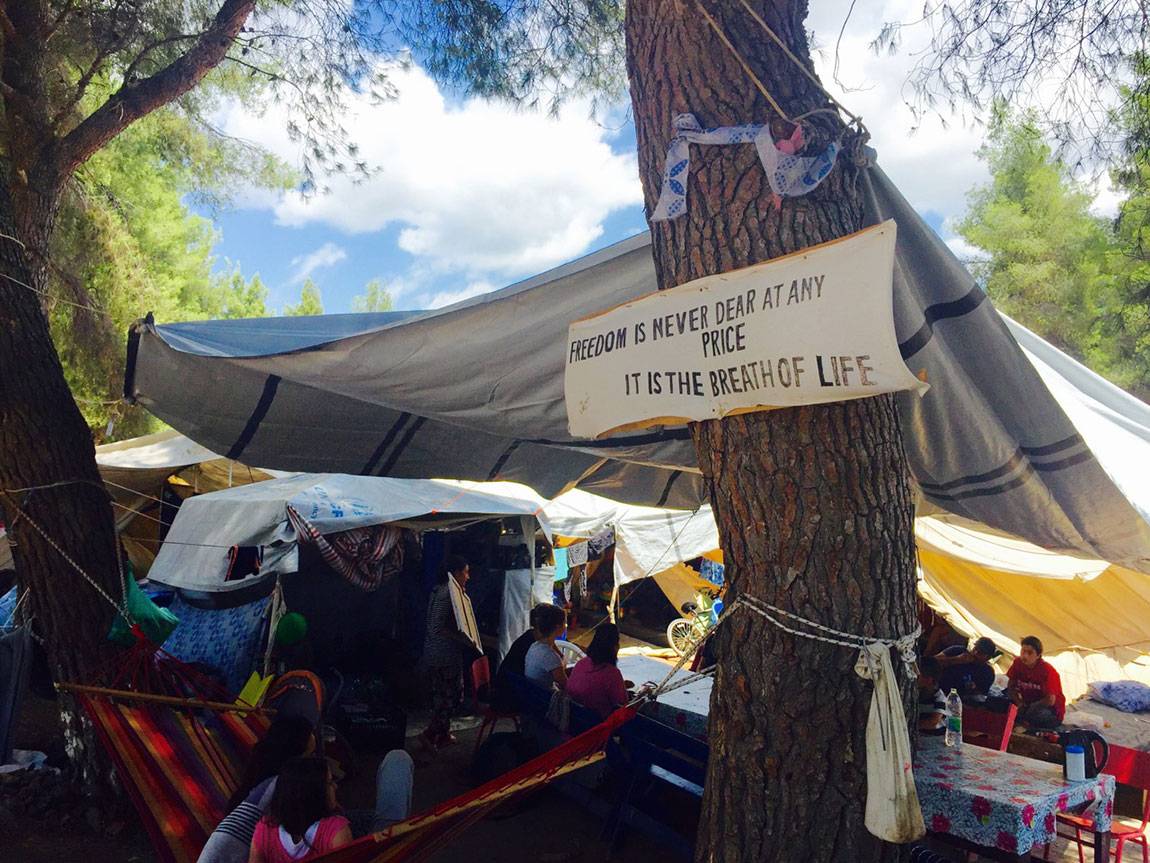 A refugee family sits beneath a plastic canopy at the Ritsona camp, about an hour outside Athens. (Photo by Hayley Roth, Class of 2017)

Building a story, one moment at a time

In the second half of the course, the students flew to Mytilene, the capital of the Greek island of Lesbos, where they visited more refugee camps, interviewed scores of refugees and continued to record their experiences through writing, photography and video.

In a blog post titled "Behind the wire," about Moria — a temporary home for refugees that has since become a long-term detention center — Amanda Blanco, a member of the Class of 2018, captured a sobering moment from an interview with Ilektra Koutsoumani, a spokesperson for the French charity Médecins du Monde (Doctors of the World).

"Most of Moria's residents, which now number more than 2,000, have been living at the site for three to four months," Blanco writes. "… Despite all that the migrants have endured — war-torn homelands, human smugglers, drownings, rough conditions at Moria — Koutsoumani said the refugees have one greater fear: being forgotten." 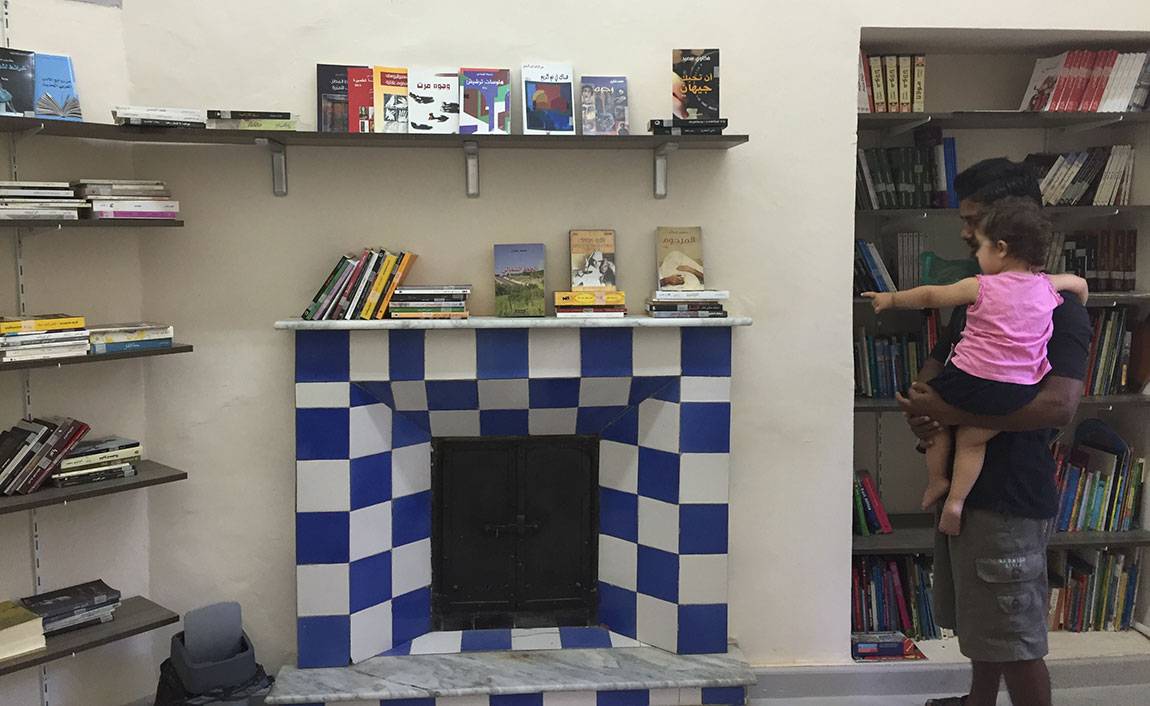 In the second half of the course, the students flew to Mytilene, the capital of the Greek island of Lesbos, where they visited more refugee camps. Above: A babysitter looks at books in the library at the Mosaik Support Center for refugees. (Photo by Ally Markovich, Class of 2017)

Stephens recounted another emotional moment that characterized the unexpected discoveries that journalists can only encounter on the ground, far from their desk or office:

"Driving on what we weren't sure were roads, begging directions from goatherds, and following the tracks of a backhoe, we finally were led to an overgrown olive grove that had been transformed into the final home for some 60 people, many of them children, many lacking identification. All had ID numbers on their tiny white headstones; they corresponded with DNA samples taken from whatever portion of their remains had been pulled from the sea. One headstone said [in Greek]: 'No. 25, age 6.' What little we can deduce of these refugees' motives in trying to reach Europe is that they all wanted to live free and safe."

Samuels, who is considering a career in journalism, continued her experience after the seminar concluded. A recipient of a John McPhee '53 Award for Summer Projects in Independent Journalism, she said she "was able to use the skills and apply the lessons I learned in Greece" while traveling to countries throughout Europe that have seen an influx of refugees during the past two years and writing about their experiences.

Stephens believes the seminar will have a lasting impact on all the participants.

"All our student journalists came away with a deeper understanding of the refugee crisis, which will be one of the defining events of their time, and an issue with which their generation will be wrestling for decades," Stephens said. "They also returned home with a rich appreciation for just how essential it is that the public have trustworthy, committed, independent journalists working on their behalf — journalists on whom the public can rely to act as its eyes and ears as they write the first rough draft of history." 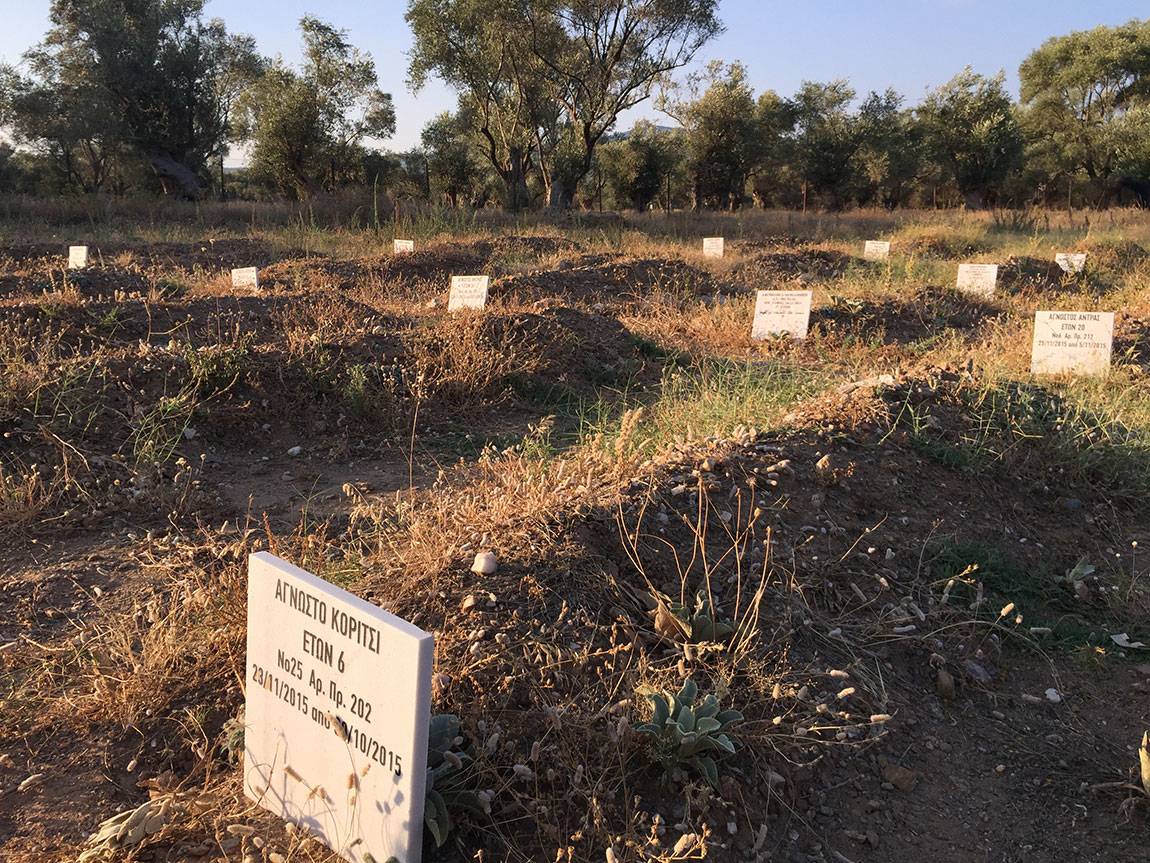 The students made the kinds of unexpected discoveries that journalists can only encounter on the ground, far from their desk or office, said Joe Stephens, the Ferris Professor of Journalism who led the seminar. Above: A makeshift cemetery in an overgrown olive grove has headstones inscribed with ID numbers that correspond with DNA samples taken from the remains of refugees pulled from the sea. The headstone in the foreground says, in Greek: "No. 25, age 6." (Photo by Joe Stephens, Council of the Humanities) 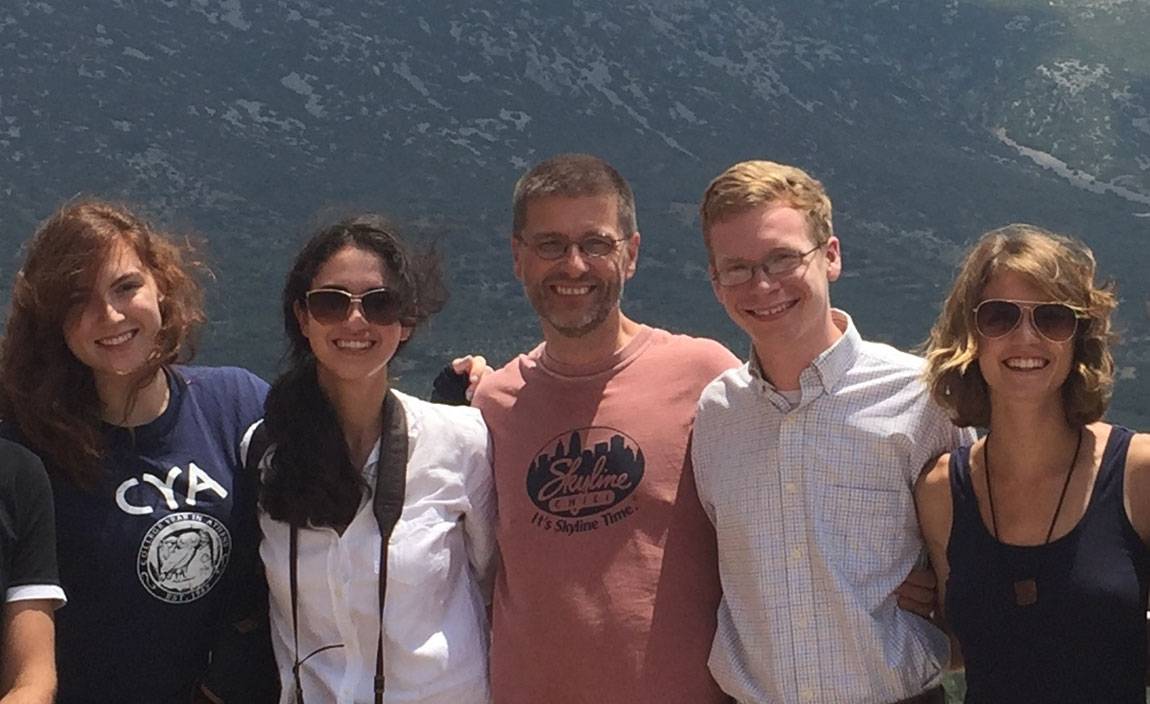