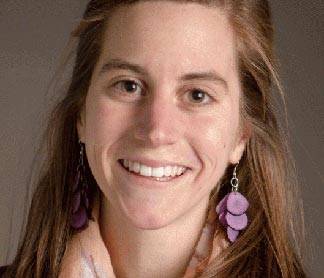 Editor's note: The following is a post to the Princeton admission blog site by Makenna May, Class of 2017, who is in Athens this summer on an internship offered through the University's International Internship Program.

Being in Athens during Greece's financial meltdown has been an interesting experience. There has been a noticeable change in the city during this uncertain time for the country, and I wanted to provide a glimpse of what life has been like in Athens these past few weeks.

One of the first Greek words I learned was "endaxi" because, well, I hear it here more than I hear people saying "hello" or anything else. "Endaxi"—or just "daxi"—means essentially, "It's all okay, nothing to worry about." In Greece, any dispute or misunderstanding at a restaurant or store can generally be resolved with "daxi"—let's just not worry about it now. It's all fine.

But ever since Greece failed to reach a deal with its creditors on June 18, the overall atmosphere in Athens has changed. The city is no longer carefree. Almost overnight, a loudspeaker system was installed that runs through the city from Syntagma Square, and thundering announcements accompany the nearly nightly protests in the city center. From my apartment, about a 15-minute walk from Syntagma, I can clearly hear (but not understand) the resounding Greek announcements as I am getting ready for bed, and the roaring echoes from the center remind all of us in my working-class neighborhood that all is not "daxi." 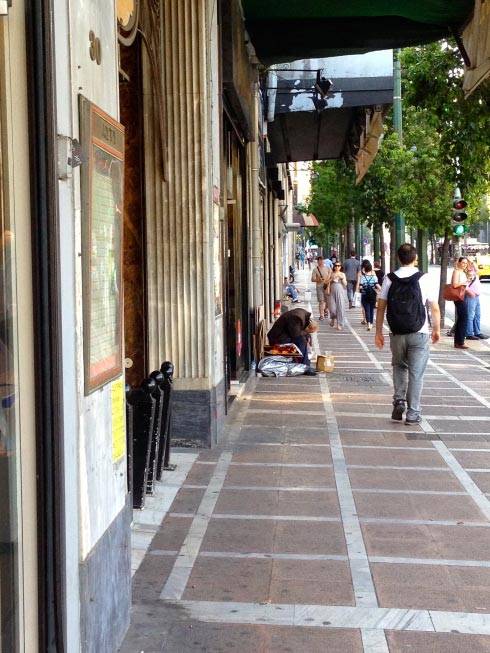 The number of homeless people in the city is significant. In the mornings, you can see them stirring in their makeshift beds in front of stores every few feet before the shops open for the day. (Photos by Makenna May, Class of 2017)

Protests and marches have taken place almost every night since mid-June in Syntagma Square and down Panepistimio Avenue. From anti-austerity anarchist movements to anti-fascist demonstrations to pro-EU protests, Greeks gather with their signs and banners, flooding the streets. Increasingly, these rallies grind traffic to a complete standstill on the streets, where honking horns add to the cacophony of the noisy protests. The roads become chaotic trails of lodged cars and motorbikes that wait for the police to finish roping off the protesters. The drivers wait, on a larger scale, to see what the next international discussions will mean for their country and their families.

On June 29, Greece imposed capital controls to slow an anticipated run on the banks. This means that ATMs can only distribute 60€ [$66] per day per bank account, which shocked the city. The Greeks weren't prepared for these measures, and the lines outside the functioning ATMs run down the street. 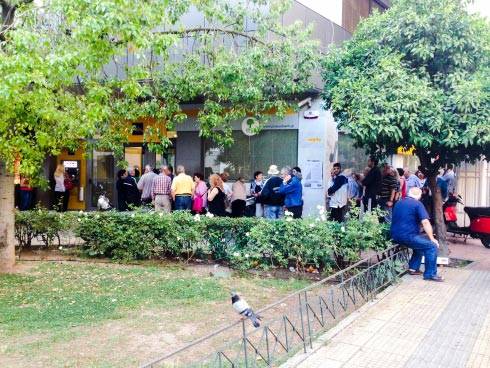 Even at the crack of dawn, the lines for the ATMs are astounding. I took this photo as I was leaving the gym at 7 a.m.

Some ATMs are guarded by policemen; others are simply empty. So, an odd melange of worried Greeks, journalists with big cameras and policemen surround the ATMs that still have funds.

Groups of policemen with guns and shields have become a common presence on the streets, especially in the governmental district, and large, navy blue armored police vehicles are stationed throughout the city. Each afternoon, policemen and journalists mingle along the paths outside the National Garden, waiting in the shade under the orange trees where last month there were only lazy stray dogs and roaming cats hiding from the sun.

There are ATMs every few shops on Panepistimio Avenue, so this scene is replicated every few meters. The motorbikes in the picture are the police force's vehicles.

Public transportation in Athens has been declared free from June 29 to July 5, when the referendum will be held for Greeks to vote a simple "yes" or "no" to staying in the EU with the euro, but now the details of this referendum are even up in the air. In the meantime, the supermarkets have become madhouses during the uncertainty. Picture last-minute Thanksgiving and Christmas shopping crowds, and you can begin to imagine the chaos in the stores. 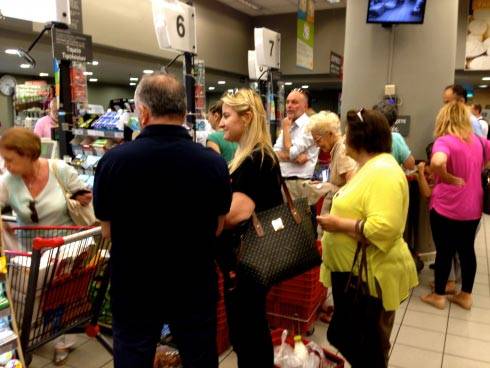 Although stores are usually quiet or even closed during the "siesta" hours (2-5 p.m.), the checkout lines recently wove down the aisles.

In my office, staff members are always tuned into their radios, constantly listening for the latest updates. I hear Greeks in cafes talk about needing to wake up each day not knowing if their country is still in the EU, not knowing what currency they’ll be using next month, not knowing their status in the country or in the world, and overall feeling powerless about the entire situation. Predominantly, the atmosphere in Athens is somber and confused. It seems that the postponement of deadlines for Greece's payments became the new normal, and the Greeks didn't anticipate an end to that pattern. After all, each deadline before was just "daxi"— nothing actually happened. But this time it is different.

Along with food flying off the shelves and ATMs running dry, the cultural sections of the local Greek newspapers that I read have been replaced with more news columns speculating about not only the future of Greece but also the anticipated outflux of citizens to Australia and other nations.

Still, as in any crisis, life goes on. Cafes open their doors each morning, and moms walk their kids to school. Gardeners prune the trees in the Zappeion Gardens, tourists trek up to the Acropolis each day and the taverns still host lively dinners at night. I knew that it would be unusual to be in Greece this summer, and it has certainly been unique to know that what my family and friends are watching on television is happening before my eyes. As for the Greek situation? The rest of the summer will tell how the uncertainty is resolved.