This summer, "Re-Staging the Greeks," a Global Seminar, immersed 15 Princeton undergraduates in experiential learning to explore how Greece's rich culture, history and landscape inspired the ancient playwrights. The seminar was led by Princeton professors Michael Cadden and Timothy Vasen. Above: Mary Lou Kolbenschlag, a rising junior, performs a scene from Aeschylus' "Libation Bearers."


What might a subway ride, frogs and soccer have to do with ancient Greek plays? This was not a question that naturally would have come up, but after six weeks in Greece this summer, 15 Princeton undergraduates have discovered how the rich culture, history and landscape of that nation inspired its playwrights whose works continue to illuminate contemporary life.

Led by two Princeton professors, the Global Seminar "Re-Staging the Greeks" transported students to key locations around Greece that resonate deeply with the country's tradition in theater. The seminar from June 11 to July 20 included reading plays, performances, lessons in Greek, guest lectures and workshops, and immersion into daily life in Athens and Epidauros. To document the experience, several students wrote on a class blog. 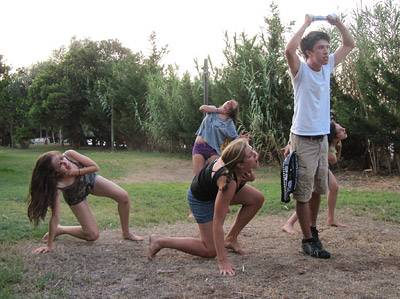 "The basic orientation of the class was to take something from 2,500 years ago and ask the students, 'How might we produce ancient Greek comedy and tragedy in a way that would be compelling to audiences today?'" said Michael Cadden, senior lecturer in theater and chair of the Lewis Center for the Arts.

Cadden led the course with Timothy Vasen, a lecturer in theater and the Lewis Center for the Arts and director of the Program in Theater, with support from Dimitri Gondicas, the Stanley J. Seeger Director of the Center for Hellenic Studies. The seminar was sponsored by the Princeton Institute for International and Regional Studies Global Seminars program, the programs in theater and Hellenic studies, and Sovereign Bank. College Year in Athens served as the host organization.

"In Athens, history truly is everywhere to be found. Even underground," rising sophomore Katherine Clifton wrote on the blog after riding the metro. She noted that glass-enclosed "mini-museums" of artifacts found during the metro's renovation interweave ancient Greek history with high-tech ticket machines and escalators in the metro stations.

Becoming aware of connections across time is exactly what the faculty members hoped the students would learn. The seminar was designed to help students "understand as much as they can about the physical places where the ancient plays were created and about the society in which this work was created," Vasen said.

"Many Greeks view the ancient and the present as a continuum," Vasen added. "Aristophanes is still alive and well and on the streets of Athens."

Clifton said the professors "are ever-encouraging us to push ourselves and our understanding of the past. I also love that we're able to really get to interact with them so much more than in the classroom. Some of the most meaningful conversations we've had — in the central market, on a hike or during a weekly family dinner — have been when the professors share their stories and wisdom in a nonacademic atmosphere." 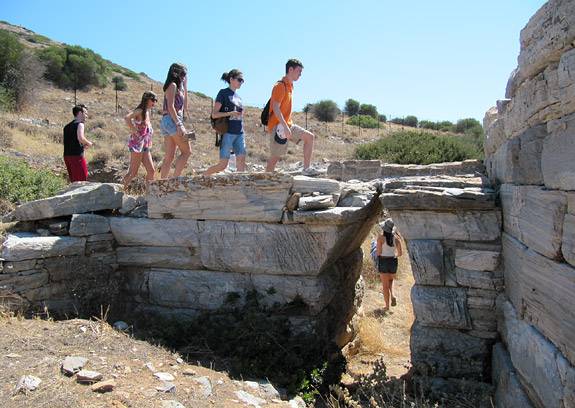 Seminar side trips included a trek through the ruins at the theater at Thorikos (sixth century B.C.E.). (Photo by Katherine Clifton)

Gondicas, a native of Greece who has built an extensive network of Greek theater scholars and professionals over the course of his career, planted the seed for the seminar. "I said to Michael [Cadden], 'How about studying ancient theater in its physical and cultural context and getting our students out of the classroom to the place where these plays were created and the landscape where it was imagined?'" Gondicas said.

This goal immediately inspired students. "I signed up for this seminar because I really wanted to see the place where theater — and, in many ways, storytelling as we know it — began," said Annika Bennett, a rising sophomore. 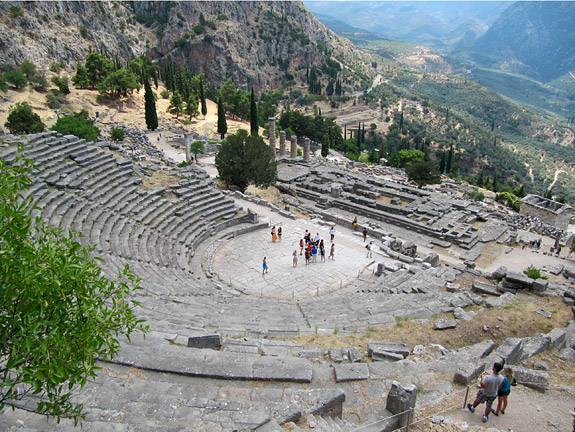 At the theater at Delphi (fourth century B.C.E.), the group experienced firsthand how architecture and landscape directly affected the way the ancient plays were written and produced. (Photo by Katherine Clifton)

The seminar is founded on experiential learning, which emphasizes exploring, observing and directly engaging in a topic, particularly Greek society and culture in this course. For example, sitting in the theater of Dionysus at the foot of the Acropolis, seminar participants learned how history inspired the ancient playwrights. Students could see Mount Himettos, where all the trees were chopped down in 500 B.C.E. to build ships for the Athenian navy. "The playwrights were looking at newly deforested hills that in some ways represented the basis of Athenian power: Athens rose to be the great city it was because they learned to be the best sailors in the ancient world," Vasen said. 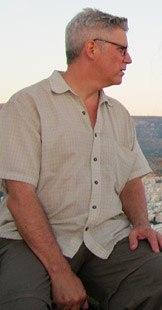 Vasen, a lecturer in theater and the Lewis Center for the Arts and director of the Program in Theater, enjoys the view from Mount Lycabettus, the highest point in Athens. (Photo by Katherine Clifton)

A trip to Thorikos — home to the second-oldest theater in Greece (sixth century B.C.E.) and the site of choral competitions that predate theater itself — reinforced the link between the plays and the politics of the day. "Right next to the theater is the entrance to a great silver mine, which would help build the enormous navy," Savannah Hankinson, a rising senior, posted on the blog.

At the theater at Epidauros (fourth century B.C.E.), carved out of a hillside and able to seat 10,000 people, Cadden said students experienced firsthand the wonder of acoustics. He said they discovered "the 'sweet spot' that makes you capable of being heard all the way to the back of the theater — a football field's distance away — even if you're talking softly, because of the acoustics of the architecture." Walking the same path as ancient actors, the group also discovered how architecture affected acoustics at the theater at Delphi (fourth century B.C.E.).

The seminar coincided with the Athens/Epidauros Theater Festival, which features performances by dozens of international theater companies. At Epidauros, the students were among packed audiences — 5,000 and 9,000 — for productions of Sophocles' "Oedipus the King" and Aristophanes' "The Clouds" by the National Theatre of Greece.

"The performance of 'Oedipus' was interrupted at a few points by shrieks from the audience," Vasen said. "We later learned that there were a lot of small frogs hopping around, landing on the spectators. The natural world insists on being part of art here."

Platon Mavromoustakos, a professor of theater studies at the University of Athens, gave a talk outdoors. The group, sitting under trees, could "listen to this natural soundscape of birdsong, wind, waves and insects, the constant backdrop to all of the plays when they were first performed," Vasen said.

Students also inspired one another with their own modern interpretations of the ancient plays.

"A friend and I adapted a scene from Aristophanes' 'Frogs' to make it two foreigners trying to make sense of the 2012 presidential election," noted Clifton. "Others have made Menelaus a British explorer, Helen a 'real housewife' of Argos, the Furies a '90s girl band, 'Lysistrata' characters into shadow puppets, and Prometheus and Io's story a modern radio drama."

The group gathers for an impromptu performance at the theater at Thorikos. (Photo by Timothy Vasen)

Rachel Donadio, the Rome bureau chief of The New York Times, brought seminar participants up to speed on the current economic crisis in Greece. "Our students were quick to connect the dots between the dire realities facing contemporary Greece and the implicit and explicit commentary on the crisis we encountered on the stages of Athens and Epidauros," Cadden said.

"The reason the theater was packed for an ancient drama like 'The Clouds' is that all the humor and all the jokes generated in the production are relevant to today's world reality," Lily Feng, a rising sophomore, wrote in a blog post.

"The Greeks are professional at taking blows, brushing off and moving on," noted Mary Lou Kolbenschlag, a rising junior. "We saw this both in the lack of rioting after the election results were announced and in the national shrug after Greece lost to Germany in the Euro Cup [in soccer]. The Greeks have a remarkable sense of identity with the very ancient past, but are decidedly focused on modernity and the future."

"I think the most exciting thing about the experience for me has been getting to see how a society in crisis uses art to respond, open dialogues and search for solutions," Bennett said. "It's been a great reminder that theater is as relevant for us today as it was for audiences in the fifth century B.C.E."