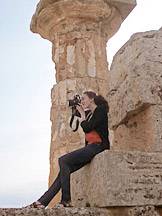 The course "Island of Cultures: Sicily From the Greeks to the Normans" brought together students from different academic disciplines who share a fascination for the ancient world. The course was offered in the fall for the first time by the departments of art and archaeology and classics and the Program in Hellenic Studies. It also was part of the graduate seminar in the Program in the Ancient World. Rachel Poser, a member of the class of 2011, took the opportunity to shoot some photographs while sitting on the ruins of a wall inside Temple E at Selinus, with a 460 BCE Doric column in the background. Photo: Courtesy of Rebecca Marriott

You have to see it to understand it. That was the lesson a group of Princeton students learned when they visited Sicily over fall break to gain a firsthand appreciation of the ancient cultures of that Mediterranean island.

Led by Princeton Professors Slobodan Ćurčić and Nino Luraghi, the overseas field trip from Oct. 29 to Nov. 8 was a required component of two courses offered this semester.

It was part of the course "Island of Cultures: Sicily From the Greeks to the Normans," offered for the first time to juniors, seniors and graduate students by the departments of art and archaeology and classics and the Program in Hellenic Studies. Six undergraduates and eight graduate students are enrolled in this course. The trip also was part of Luraghi's graduate seminar in the Program in the Ancient World, "Center and Region in the Ancient Mediterranean," which brings together doctoral candidates in art and archaeology, classics, history and religion. Four graduate students are enrolled in this course. Last year, the graduate program seminar included a field trip to Sparta.

According to Luraghi, the David Magie '97 Class of 1897 Professor of Classics, Sicily offers an extraordinary destination for students of ancient and medieval cultures of the Mediterranean because of its central location. The largest island in the Mediterranean, Sicily was a "crossroads meeting place of different peoples, religions and cultures." From Antiquity to the Middle Ages, spanning 700 BCE to 1200 CE, the island successively was inhabited by Greeks, Phoenicians, Romans, Byzantines, Arabs and Normans, generating a wealth of cultural artifacts.

The areas of expertise of Luraghi and Ćurčić, a professor of art and archaeology, complement the exploration of such a range of material. "We come to the subject from very different perspectives," said Luraghi. "Professor Ćurčić is a specialist of medieval architecture, among many other things, while I am a historian of the ancient world who works with material evidence. And, of course, my field of expertise stops in time where his starts." 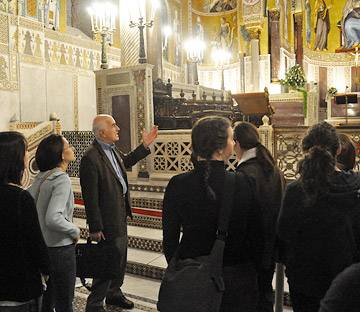 Slobodan Ćurčić (third from left), a professor of art and archaeology who is a specialist of medieval architecture, leads students through the Palatine Chapel in the Norman palace in Palermo. (Photo: Courtesy of Alex Walthall)

In addition, the variety of academic disciplines represented by the students in the courses, such as architecture, art and archaeology, classics and history, brought fresh insights to discussions as the Princeton group visited key cultural and archaeological sites across the island.

On the itinerary were museums, cathedrals and churches, an amphitheater, fortifications, catacombs, monuments and other archaeological sites. While the students from the two classes joined forces for much of the trip, some excursions were split based on the historical focus.

For Rebecca Marriott, a senior who is majoring in architecture, the course and trip have opened doors to new areas of interest -- archaeology and architectural history. "As an architecture student, I am often studying 20th-century cities," she said. "Studying ancient history, for a change, was fascinating."

Marriott said that a particular highlight was visiting the ancient city of Selinus, founded by Dorian Greeks in around 628 BCE. "Examining drawings of the city's site plan and street grid, I pictured a living, functional city," she said. "To go to the site, hear my professors and colleagues talk about what once was, and walk among the architectural ruins was enthralling because I filled in the missing stones in my head in order to imagine the lives of the people. As I was there, among the excavations, the city came to life."

Dawn LaValle, a second-year graduate student in classics and Hellenic studies, echoed the general sentiment that "there was simply no substitute for seeing the monuments in the flesh." She added, "Actually walking around the remnants of an overgrown archaic town [Naxos] or standing in the middle of a church [Monreale] covered with glittering 12th-century mosaics is a completely different experience than looking at a slide show."

The students visited a wide range of historical sites, including the acropolis of Himera, an ancient Greek city founded during the seventh century BCE. They are led here by Professor Nino Luraghi (second from left). (Photo: Courtesy of Alex Walthall)

While LaValle's main scholarly focus is literature, she was eager to learn more about art and archaeology and to discover what could be deciphered in the layers of history evident in many of the sites, and how ancient sites were put to new uses.

For instance, she recalled how a visit to the ancient stone quarry in Syracuse, known as the Latomie, made her think of the "disastrous Sicilian expedition by the Athenians as told by Thucydides," which resulted in the enslavement of thousands of soldiers there. At the site, she realized that after that brutal chapter in history, monks had created dwellings in the walls around the Latomie in the early Middle Ages. There even remained a pillar upon which a monk evidently had lived -- one of the early Christian ascetics known as a stylite.

"To think that a stylite had lived on the top of a pillar in the middle of the quarry that had heard the cries of thousands of Athenians die in slavery was an amazing thing for me to contemplate," said LaValle. 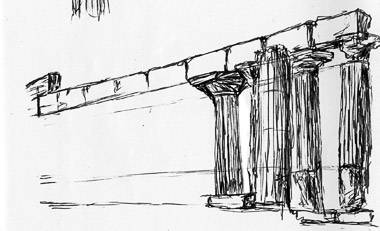 The visit also sparked a new angle of research for her, as LaValle has expanded her previous interest in the "reuse of pagan literature by early Christians" to examine the reuse of pagan architecture as well.

Alex Walthall, a fourth-year graduate student in art and archaeology, also used the trip to deepen his scholarship, which is specifically devoted to Sicilian history. "My dissertation will focus on the transition from the Hellenistic to the Roman republican period in Sicily, roughly the third to first centuries BCE," he said, "so it was particularly rewarding for me to gain a better appreciation for the connectivity fostered by the island, both in terms of geography and history."

Walthall added, "I could not imagine having better guides than Professors Ćurčić and Luraghi, who generously shared with us, graduate and undergraduate alike, their vast knowledge. Students were expected to actively contribute their insights and opinions, which often led to lively and memorable discussion among the entire group."

Back on the Princeton campus, the students gave presentations that Luraghi said were "deeply informed by the experience of the trip." They also relished the bond that travel combined with learning can foster.

"Before we left for Sicily I hardly knew the names of any of the undergraduates in the class," said LaValle. "But now I stop to talk to them when I see them on campus. I think it was a wonderful experience to have a variety of levels of expertise on the trip. We all felt so privileged to be able to go."

The Princeton group gathers at Temple E in the archaeological site of Silenus, an ancient Greek city founded during the seventh century BCE on the southwestern coast of Sicily. (Photo: Courtesy of Nino Luraghi)