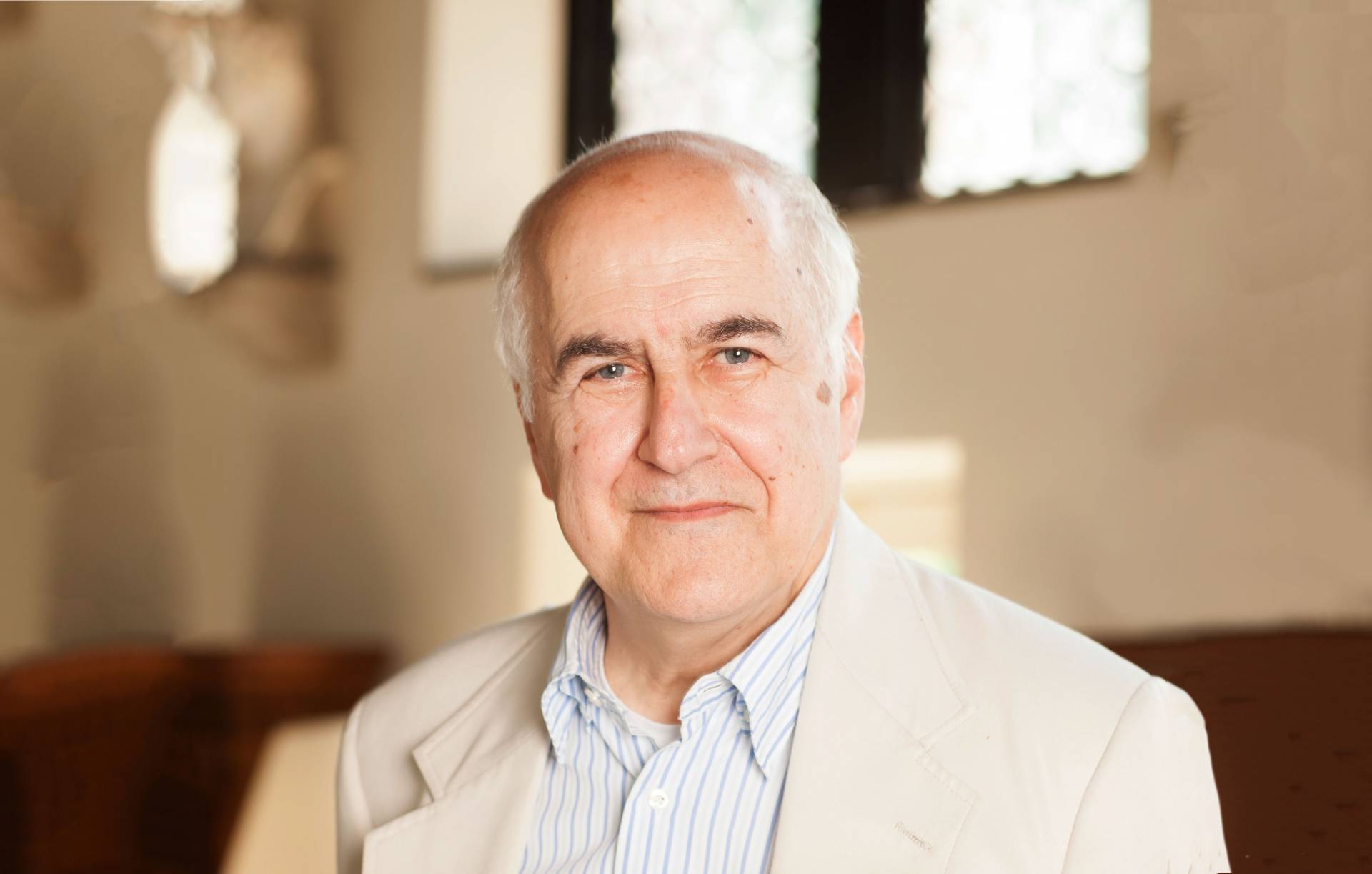 Slobodan (Danny) Ćurčić, professor of art and archaeology, emeritus, at Princeton University, and a global authority on Byzantine art and architecture, died Dec. 3 in Thessaloniki, Greece. He was 76.

Ćurčić was a prolific scholar whose work examined a wide spectrum of topics across southeast Europe. Among his areas of focus were late-Roman and early-Christian archaeological remains in Cyprus, Greece and Serbia; decoration of Byzantine-Norman churches in Sicily; and architecture in the Byzantine Balkans from late antiquity to the Ottoman era.

Born Dec. 19, 1940, in Sarajevo, Bosnia and Herzegovina (the former Yugoslavia), Ćurčić grew up in Belgrade, Serbia. He received his bachelor’s and master’s degrees in architecture from the University of Illinois at Urbana-Champaign, and in 1975 received his Ph.D. from the Institute of Fine Arts, New York University, writing a dissertation on the Late Byzantine church at Gračanica.

Ćurčić returned to his alma mater in Illinois to teach for 11 years before joining Princeton’s Department of Art and Archaeology in 1982. From 1985 to 1988, he served as director of graduate studies for the department, and from 1988 to 1990 as department chair. In 2006, he became director of the Program in Hellenic Studies. He was named professor emeritus in 2010.

“Danny taught in the department for nearly three decades, during which he fostered the continuity of Princeton’s long-standing pre-eminence in Byzantine art and architectural history, introducing a generation of undergraduates to his subject’s wonders and guiding many graduate students as they entered into their careers,” said Michael Koortbojian, the M. Taylor Pyne Professor of Art and Archaeology and chair of the Department of Art and Archaeology.

In it he stressed the synthetic aspects, common roots and parallel strands of architectural developments in the Balkans, a politically turbulent region where art commonly has been interpreted from narrow, national perspectives.

Among his many books and publications, Ćurčić was co-editor of “The Twilight of Byzantium” and “Secular Medieval Architecture in the Balkans, 1300-1500, and Its Preservation.” At Princeton, he organized two exhibitions accompanied by publications, "Byzantium at Princeton" in 1986, and “Architecture as Icon” in 2010. 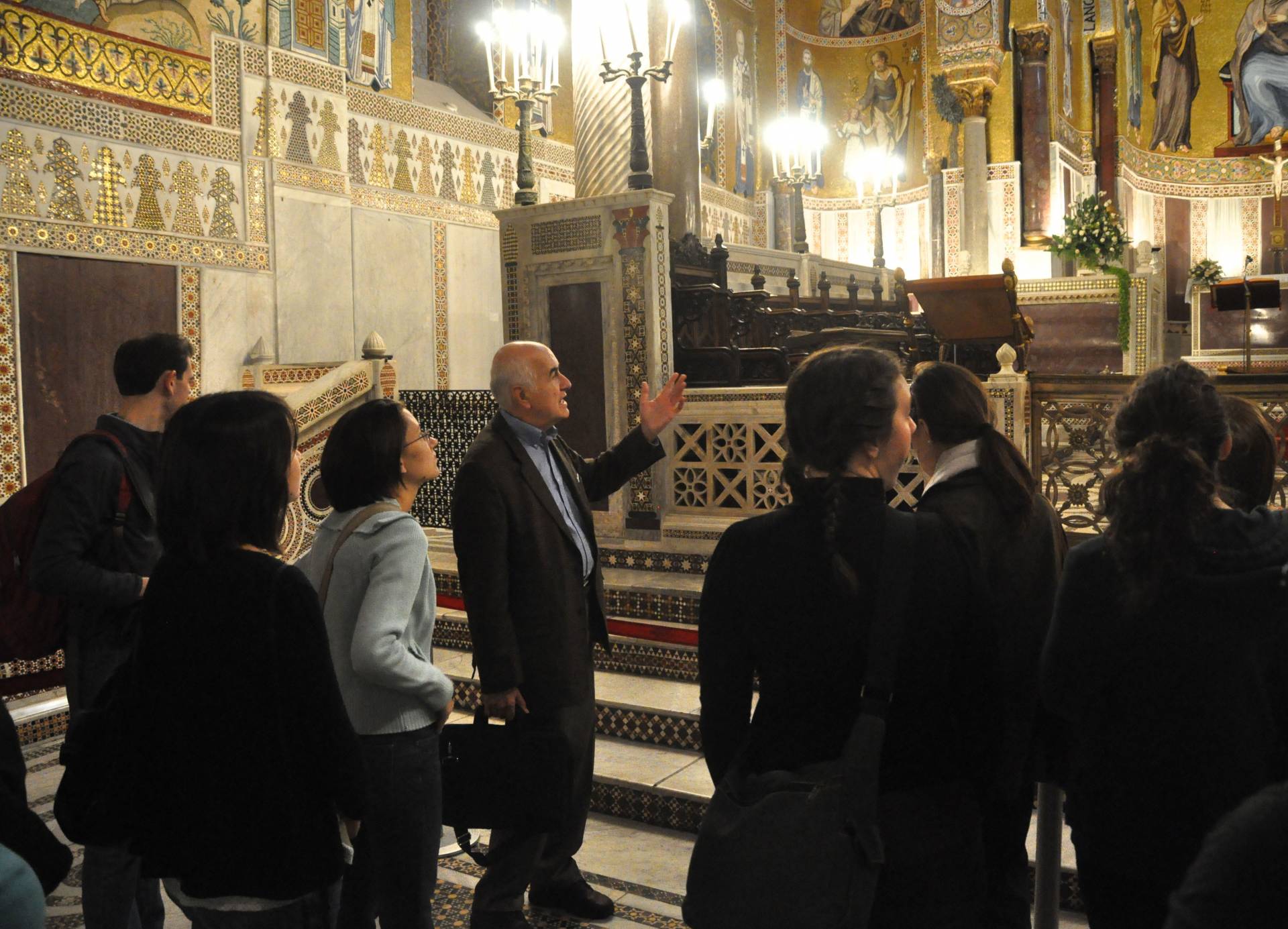 Ćurčić (fourth from left), professor of art and archaeology, emeritus, who specialized in medieval architecture, is shown in 2010 leading students through the Palatine Chapel in the Norman palace in Palermo, Sicily.

He frequently took his research into the field, participating in excavations at sites in Sicily, Greece and the former Yugoslavia. William Childs, professor of art and archaeology, emeritus, recalled their work together on Princeton-led excavations at Polis Chrysochous, Cyprus, and how Ćurčić “made sense of what appeared to be amorphous rubble making excruciating puns all the way in 40-degree Centigrade heat.”

“Danny had the terrible habit of puns, many so unexpected they took some time to sink in. This reflected his scholarship — meticulous with unexpected results,” Childs said. “He was, of course, a difficult man — demanding, intense and kind. His graduate students worshipped him and a brief scan of his scholarship reveals a broad and profound knowledge of his principal interest, Balkan architecture of the Middle Ages.”

Ćurčić guided the careers of many scholars. Nikolas Bakirtzis, an associate professor at the Cyprus Institute in Nicosia, Cyprus, said the main reason he attended Princeton was to study with Ćurčić.

“His broad knowledge of the Byzantine and Medieval Balkans and the Mediterranean along with his generosity as a mentor, shaped my understanding and interest in the lasting influence of Byzantium,” Bakirtzis said. “His intellectual curiosity and eagerness to revisit old questions, challenge established scholarly positions, and rethink our approach to Byzantine society affected and guided my research.

“His research into the historiography of the study of Byzantium in the Balkans continues to motivate me to explore the ways Byzantine and Medieval heritage was used, interpreted, appropriated and obliterated to serve the establishment of national narratives of the 19th and 20th centuries,” Bakirtzis added.

Alessandra Ricci, who received her Ph.D. from Princeton in 2008 and is a faculty member in the Department of Archaeology and History of Art at Koç University and director of the Italian Institute of Culture in Istanbul, said Ćurčić encouraged her to pursue fieldwork and archaeological excavation in Istanbul critical to the understanding of Byzantine art and architecture.

“I now feel privileged to run with the Istanbul Archaeological Museums the only non-rescue excavation in Istanbul, the Küçükyalı ArkeoPark Project,” she said. “The cultural heritage component of the project springs out from the many conversations Slobodan and I had about Byzantine monuments under threat and the awareness that heritage should be conserved as well as studied. The ArkeoPark is now a reality and the excavation project proceeds from year to year.”

Through his courses, such as "Island of Cultures: Sicily From the Greeks to the Normans," Ćurčić showed Princeton students firsthand some of the treasures he studied, taking a group of undergraduate and graduate students to ancient sites on that Mediterranean island.

"Students were expected to actively contribute their insights and opinions, which often led to lively and memorable discussion among the entire group,” said Alex Walthall, who was a graduate student on that trip, which was co-taught by Nino Luraghi, the David Magie '97 Class of 1897 Professor of Classics.

“I could not imagine having better guides than Professors Ćurčić and Luraghi, who generously shared with us, graduate and undergraduate alike, their vast knowledge," Walthall said.

Among Ćurčić’s distinctions, he was a fellow at the Dumbarton Oaks Center for Byzantine Studies in Washington, D.C. He was awarded a charter by the city council of Belgrade for his book, “Gračanica,” and he was elected a member of the Serbian Academy of Sciences and Arts. He also was elected an honorary member of the Christian Archaeological Society in Athens.

Ćurčić is survived by the mother of his children, Susanne Philippson of Kaufbeuren, Germany; his daughters, Danica Ćurčić (Matt) of Princeton, and Milica Wainwright (Fred) of Lebanon, New Hampshire; and two grandchildren.

A memorial service will be held in the spring in the Princeton University Chapel.

View or share comments on a blog intended to honor Ćurčić’s life and legacy.