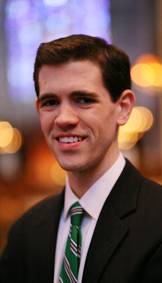 Princeton senior Christian Sahner, an art and archaeology major who plans to pursue a career as a professor of ancient history, has been awarded a Rhodes Scholarship for graduate study at the University of Oxford.

The Maplewood, N.J., native was one of 32 American students chosen for the prestigious award, which provides funding for two or three years of study at Oxford. Sahner will pursue a master's degree in Byzantine studies, with a focus on the period of late antiquity (250-800 A.D.).

Sahner, who also is pursuing certificates in medieval and Hellenic studies, said his academic interests are driven by an "intense curiosity in how a culture responds to transition."

"I am excited by the opportunity to examine the interactions between Byzantium and its neighbors," he said. "Indeed, among the great joys of Byzantine history is the chance to observe a civilization caught between two of the most formative historical events of the pre-modern world: the collapse of the Roman Empire in the West and the Arab conquest of the Mediterranean basin."

Sahner has been an active voice on campus in addressing political and social issues as a co-founder of the Elizabeth Anscombe Society, a student organization that promotes traditionally conservative conceptions of marriage, family and sexuality, and as editor-in-chief of the Princeton Tory, a conservative magazine. Through his work at Princeton and future studies at Oxford, Sahner believes that learning more about the ancient world will provide him with greater insight into current debates.

"The ancient historian often wields an advantage over the politician or sociologist in his perspective on contemporary affairs," he said. "I hope to use this privileged viewpoint to address the relationship between ethics, religion and politics in our world today -- not through elected office, but in the opinion pages of our newspapers, the lecture halls of our universities and the ever-expanding medium of the Internet. For in a transitional society such as ours, where the neatly defined antitheses of right and wrong are less clear than ever before, comparisons to a similarly diverse late antique world can be illuminating."

Sahner founded and co-edits Scivias, an academic journal highlighting Princeton students' research in medieval studies. He also is an undergraduate ministry coordinator for the Aquinas Institute and a junior fellow of the James Madison Program in American Ideals and Institutions.

"In my 24 years of teaching at Princeton he stands out as the best undergraduate I have had the privilege of working with," said Slobodan Ćurčić, a professor of art and archaeology who is Sahner's senior thesis adviser. "I am totally confident that he will continue to excel in any environment and in any position, no matter where the future will take him."

Ćurčić added, "To find a college senior who already has Latin and classical Greek in his background is in itself remarkable. To find a student who has that and a string of other academic achievements behind him to boot, and who knows what to do with that knowledge, is a unique phenomenon."

John Fleming, the Louis Fairchild '24 Professor of English and Comparative Literature Emeritus, said, "Any Princeton professor must feel blessed to teach the students we meet here, but even among such remarkable young people there are always a few who claim a permanent place in one's memory and affection. That Christian Sahner is an extraordinary student goes without saying, though of course it has been said in various prizes and awards such as his early election to Phi Beta Kappa. He combines an incisive intelligence with imaginative energy and an enviable capacity for sustained hard work. The Rhodes selectors undoubtedly saw all this. But they must have seen as well something more impressive yet, the luminous ethical core in which all his scholarly gifts cohere and from which they take their effective direction."

Sahner was chosen for the Rhodes Scholarship from among 896 applications from 340 colleges and universities nationwide. Winners are selected on the basis of high academic achievement, integrity of character, a spirit of unselfishness, respect for others, potential for leadership and physical vigor. The awards were created in 1902 by British philanthropist Cecil Rhodes.