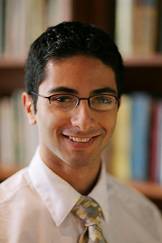 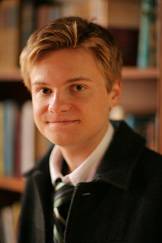 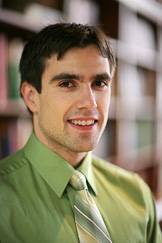 Three Princeton seniors, Sherif Girgis, Brett Masters and Landis Stankievech, have been awarded Rhodes Scholarships for two or three years of graduate study at the University of Oxford.

Girgis and Masters are among the 32 American college students who won the fellowships, while Stankievech is a winner from Canada.

Girgis, a Dover, Del., resident who was born in Cairo, Egypt, is a philosophy major at Princeton and intends to study philosophy at Oxford. Masters, a Charlotte, Mich., native, is a comparative literature major who hopes to further his academic interest in the medieval period at Oxford. Stankievech, who is from Trochu, Alberta, is a mechanical and aerospace engineering major who plans to earn a second bachelor's degree at Oxford in a joint program in philosophy, politics and economics.

Girgis is interested in "philosophy's social value and reason's power to bridge communities in conflict. Philosophy -- especially ethics -- has dazzled me as much by illuminating new insights (like the moral foundation of civil rights) as by subverting old certainties (like my former support for the death penalty)."

Girgis has been an active voice on campus addressing political and social issues as the president of the Elizabeth Anscombe Society, a student organization that promotes traditionally conservative conceptions of marriage, family and sexuality, and as editor-in-chief of the Princeton Tory, a conservative magazine. He also has contributed to The Daily Princetonian.

A student of Spanish, German, Italian and French, Girgis has served as a Spanish translator at the University Medical Center at Princeton and as an English tutor. He also is a senior co-leader of the Aquinas Institute Catholic Chaplaincy at Princeton and a junior fellow at the James Madison Program in American Ideals and Institutions.

Girgis was the winner of the 2007 Dante Prize for the best undergraduate essay in the nation on the Italian poet. At Princeton, he has won the German Department Book Prize and the Dorothea Vandyke McLane Prize for the highest performing freshman in Italian.

"I admire Sherif for both his brilliance and his boldness," said Robert George, the McCormick Professor of Jurisprudence. "He is an extraordinarily gifted young philosopher who has been outspoken in challenging the dominant opinions on campus on such hot button issues as abortion, embryo-destructive research, and sexual morality and marriage."

Simone Marchesi, an assistant professor of French and Italian, said, "Sherif's intellectual strength and academic excellence are perhaps best displayed in the final work he produced in my Dante seminar. His paper centered on a novel line of inquiry into the origins of the punishment Dante devised for suicides in his 'Inferno.' It is a complex, much-debated question in Dante studies, which Sherif tackled from a new point of view, introducing new material to the discussion. The problem Sherif addressed is a real crux in the poem, and his conclusions were well worth being examined by the scholarly community."

While Masters' academic interest is in the medieval period of literature, he also has conducted economic research with professor Burton Malkiel on the financial conditions of Chinese and Thai businesses and studied nonfiction writing with John McPhee during his time at Princeton.

"I hope to pursue a career in academia and as a writer and, ideally, to combine these two aspects of my life," Masters said. "I think we can still learn a lot from the Middle Ages about the origins of our own ideas and anxieties, or at least benefit from seeing these refracted through the long lens/dark glass of history."

He has received the Quin Morton Freshman Writing Prize and an Edwin Ferris grant from the Council of the Humanities to fund unpaid internships in academics or the media, which he used while working at publisher Farrar, Straus and Giroux.

In his study of medieval literature, Masters is particularly interested in the ways medieval authors thought about sexuality and personal identity. Next spring he hopes to travel to Florence to extend his research for a senior thesis on the 13th-century Italian poem "Il Fiore," allegedly written by Dante. He hopes to further expand the scope of this work in the medieval English studies program at Oxford, focusing on the reception of Occitan and Italian poems in late medieval England.

At Princeton, Masters is a peer educator at the Lesbian, Gay, Bisexual, Transgender Center and helped organize efforts last year by the Gay Family Rights Project to legalize gay marriage. He has tutored grade school and middle school students with the Step-Up After-School Program and the Princeton Young Achievers.

"He's brilliant in a low-key, quietly witty way," said Sarah Kay, a professor of French and Italian who has taught Masters in two graduate seminars on the Middle Ages. "He writes with astonishing maturity and an amazingly limpid and readable style. He has a gift for languages and literary analysis. I thought he was probably the smartest person in the class, and that included me."

John Fleming, the Louis Fairchild '24 Professor of English and Comparative Literature Emeritus, said, "His intellect is deep, intense, yet quirky in its constantly surprising and delightful gestures. The range of his intellectual ambition is apparently boundless. He is a post-modern seeker after old-fashioned truth, and he is one of those who will unquestionably leave our needy world a better place than he found it. I remember that one of the very few 'bad' feelings I had about retiring was the realization that I would never again teach young people of this caliber."

Stankievech wants to study philosophy, politics and economics at Oxford, after which he hopes to work on environmental issues.

"As an engineer I know how to approach technical and logistical problems," he said. "However, making changes to help our climate is going to take more than engineering solutions. It will take an understanding of economic and political situations and of the ethical arguments that go into making those changes."

Among other honors, Stankievech was awarded the Shapiro Prize for Academic Excellence in 2005 and 2006 and the Manfred Pyka Memorial Physics Prize in 2005.

Michael Littman, a professor of mechanical and aerospace engineering, described Stankievech as having "an extreme thirst for knowledge and a real knack for engineering analysis. He is a natural and effective leader, and a supportive helper of his peers."

"He has a passion to truly understand what he's studying," said Jeremy Kasdin, an associate professor of mechanical and aerospace engineering. "With the questions he asked me in class and during office hours, I could see he was wrestling with problems, really wanting to understand what was behind them. He works incredibly hard and is very respected by his peers."

Stankievech also has excelled as a member of the Princeton men's ice hockey team. His coach, Guy Gadowsky, said his teammates "have benefited from witnessing his great work ethic and his commitment to being the absolute best he can be in all areas of his life. On the ice Landis is a tireless worker who gets rewarded for his committed team play with big goals in big games."

As an athlete, Stankievech has been involved in several youth programs, including teaching youngsters to skate in the Special Olympics Skating Program and coaching in the Princeton Youth Hockey program.

Girgis and Masters have been close friends since their freshman year at Rockefeller College, despite holding very different views on many political and ideological issues.

"We are sort of on opposite ends of the political spectrum and the ideological spectrum, but we have just not let disagreements get in the way," Masters said. "I think it's how we've become good friends."

The two spend a lot of time together debating issues, from the personhood of a human fetus to the morality of gay marriage.

"We have our scuffles on a regular basis, but it's always pleasant and good-willed," said Girgis. "It would be a disservice to our friendship to be less than forthright."

Both say they have learned a great deal from the other.

"I've learned more from him than I have anyone except maybe my parents," Girgis said.

Girgis and Masters were chosen for the Rhodes Scholarships from among 764 applications from 294 colleges and universities nationwide. In addition to the 32 Americans, scholars also are selected from Canada as well as from Australia, Bermuda, the nations of the Commonwealth Caribbean, Germany, India, Jamaica, Kenya, New Zealand, Pakistan, Southern Africa (South Africa, plus Botswana, Lesotho, Malawi, Namibia and Swaziland), Zimbabwe and Zambia. Approximately 85 scholars are selected worldwide each year. Winners are chosen on the basis of high academic achievement, integrity of character, a spirit of unselfishness, respect for others, potential for leadership and physical vigor.