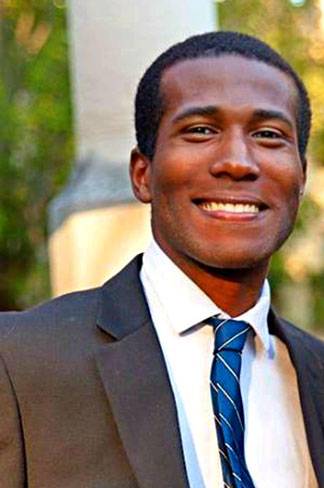 Robertson, of Redford, Michigan, is concentrating in Italian (in the Department of French and Italian) and pursuing a certificate in African American studies. At Oxford, he plans to pursue an M.Phil. in modern languages.

Upon learning he had won the scholarship, Robertson said: "I was with the other candidates from my district in a cozy little room in Chicago. The Rhodes committee announced the winners after deliberating for more than an hour. I called my best friend from home first. We'd talked about applying for post-grad opportunities — including the Rhodes — for years. It was odd and satisfying to watch a dream materialize."

At Princeton, Robertson has pursued independent work focused on transnationalism and linguistic exchange in a work of Afro-Italian migratory literature. In summer 2014, he attended Cambridge University's Pembroke College-National Academy of Writing Summer Programme. He spent his spring 2016 semester abroad at the University of Bologna, Italy, where his course highlights included "Contemporary Italian Literature: Postmodernisms and New Realisms" and "Modern and Contemporary History of Africa."

"There's a great network of scholars and policy experts based at Oxford [Italian Studies] who research Italian migration phenomena," he said. "One of their recent projects was about representations of migration in media and narrative, and this topic is at the heart of my own work. I'm eager to learn and write about Afro-Italian literature while using this network as a resource."

To satisfy the requirements for his major and certificate, Robertson is writing the first Italian-to-English translation, with an accompanying introduction, of a novel by Igiaba Scego, a contemporary author of Somali origin who was raised in Rome.

"Aaron is a bright young man, with a mind of his own, capable of opening up his scholarly work to wider concerns," said Simone Marchesi, associate professor of French and Italian, who is Robertson's thesis adviser, along with Pietro Frassica, professor of French and Italian. "True to all his academic pursuits, he is also genuinely engaged in leaving a mark in our society beyond his scholarly activity," Marchesi said.

After completing the Rhodes Scholarship, Robertson plans to pursue a career as a publisher, translator or journalist. He said: "I have a feverish love for journalism, so that's a likely path. Publishing is another possibility. What's important to me is that I create spaces for unusual, compelling narratives about the African diaspora to thrive. I also hope to write and publish a novel that I'm proud of."

In his Rhodes application, Robertson wrote: "I wish to advocate for a model of publication as civic engagement. In this light, the publisher is a kind of translator who has an ethical responsibility to present the work of underrepresented artists in edited, but essentially unadulterated, form."

Outside the classroom, Robertson has demonstrated leadership experience as co-editor-in-chief of The Nassau Literary Review. He also helped organize the first Edmund Wilson Symposium "Narratives of the Periphery," focused on the moral and political responsibilities of the arts towards marginalized communities, and a literary conference headlined by National Book Award-nominated author Angela Flournoy. He is a member of Mathey College, one of Princeton's six undergraduate residential colleges.

Robertson's honors and awards include Questbridge and Gates Millennium Scholarships, the Dorothea van Dyke McLane Prize (awarded to the outstanding freshman in Italian at Princeton) and the Greater New York Chamber of Commerce Prize (for best junior in Italian at Princeton). He also received a Martin A. Dale '53 Summer Award, which provided funding for an independent project titled "To Serve the Dead: Creating Christian Saints and Black Martyrs," for which Robertson traveled in summer 2015 throughout Scotland, England and Italy to visit sites associated with medieval Christian saints, while he began writing fiction that synthesized early African American literary practices, as well as the genres of the autobiography, confessional and "vita" (the life of a saint). He was also awarded a Ferris Summer Grant for Student Internships in Journalism under the auspices of the Humanties Council, which provided support for an internship with the Detroit Metro Times newspaper in summer 2016.

One of Robertson's writing courses was "Creative Non-Fiction," taught by John McPhee, a Ferris Professor of Journalism who has taught writing at the University since 1974. McPhee said: "In or beyond the classroom, Aaron does everything 100 percent — whether he is putting online the entire century-and-three-quarters of The Nassau Literary Review, or writing detached, agnostic prose about childhood visits with his grandmother to Duns Scotus College [in Southfield, Michigan] for religious instruction: "I loved my grandmother, but I thought it would be better were some lapse of piety to prevent her from bringing me to this place."