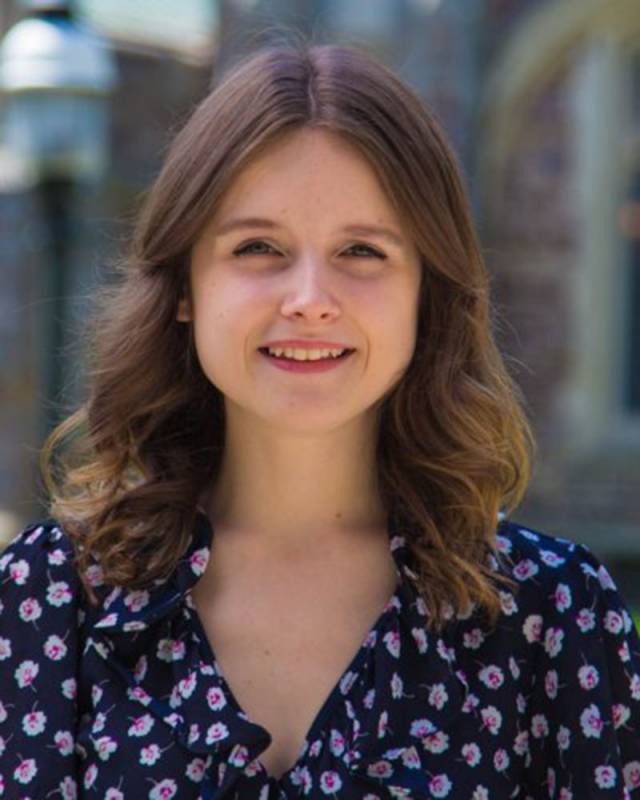 They are among 32 American recipients of the prestigious fellowships, which fund two to three years of graduate study at Oxford. Last month, Princeton senior Samvida Sudheesh Venkatesh was awarded a Rhodes Scholarship for India. The students will begin their studies at Oxford in October 2019.

D’Angelo, of Hewitt, New Jersey, is majoring in classics at Princeton and pursuing certificates in creative writing, humanistic studies, and gender and sexuality studies. She plans to pursue the M.St. in Classics at Oxford.

As a first-generation college student from a public school without Greek or Latin courses, D’Angelo had no exposure to classics before coming to Princeton. Her passion for classics was sparked in her first year at Princeton during the Humanities Sequence, a year-long, team-taught survey of the Western canon.

Her interests lie in exposing more people to classics and in understanding ancient texts through a modern lens. Her research puts contemporary issues in conversation with ancient works, examining society’s potential biases, interests and assumptions.

“I hope to use my Rhodes Scholarship to establish a public platform for displaying the relevance of antiquity to our world today,” she said. “In the West, we prize concepts like democracy, republicanism and philosophy from our classical past, yet we can also trace back to this time some of today's most unsavory societal norms: for example, the exclusion of women and other marginalized voices from power. By using my work and translations to broaden the audience of classics to new populations at a place as storied as Oxford, I hope to inspire budding classicists and non-classicists alike to examine the global reception of ideas from the amazing yet deeply troubling worlds of ancient Greece and ancient Rome.”

In her junior year, D’Angelo received the national Beinecke Scholarship that supports promising students in their graduate studies in the arts, humanities and social sciences. She also is a recipient of Princeton’s Shapiro Prize for Academic Excellence.

“Nicolette is able to combine a commitment to understanding the ancient world on its own terms with making it speak to contemporary concerns,” said Yelena Baraz, associate professor of classics. “All the work Nicolette does, academic and creative, is personally meaningful. From her first day in the Humanities Sequence she has intensely engaged with the tradition we were teaching and, in her engagement, she was both transforming it and preparing to add to it.”

Last summer, D’Angelo interned at the Paideia Institute in Rome, helping write educational materials for the study of Greek and Latin. She also teaches Latin to elementary school students through Princeton Young Achievers.

“I’ve had the opportunity to teach Latin using a living language model that acknowledges the powerful relationship between the personal lives of students and ancient literature,” D’Angelo said. She one day hopes to become a professor in classics at a public university.

Upon learning she had won the Rhodes Scholarship, D’Angelo was reminded of another November weekend four years ago.

“After receiving warm congratulations from the [Rhodes] selection committee, I immediately called my mother and cried with her after sharing my unreal, euphoric news,” D’Angelo said. “I can't help but remember calling her in November during my first year of college, in tears, to say that I was finding my courses too difficult, that I feared I would never be able to succeed at a school like Princeton, to call her three years later with very different news is the greatest thanks I can give my parents for their unconditional support of my education. I owe everything to the love, support and mentorship of my family, friends and teachers.”

D'Angelo said she is proud to be among a diverse groups of Rhodes Scholarship winners. According to the Rhodes Trust, almost half of the 32 American finalists are either immigrants or first-generation students and 21 are women.

In addition to her interest in classics, D’Angelo is a residential college adviser in Mathey College. She is editor of The Nassau Literary Review, a peer mentor at the Humanities Council, a fellow at the Writing Center, managing editor of “Tortoise: A Journal of Writing Pedagogy,” and  a member of the Behrman Undergraduate Society of Fellows. 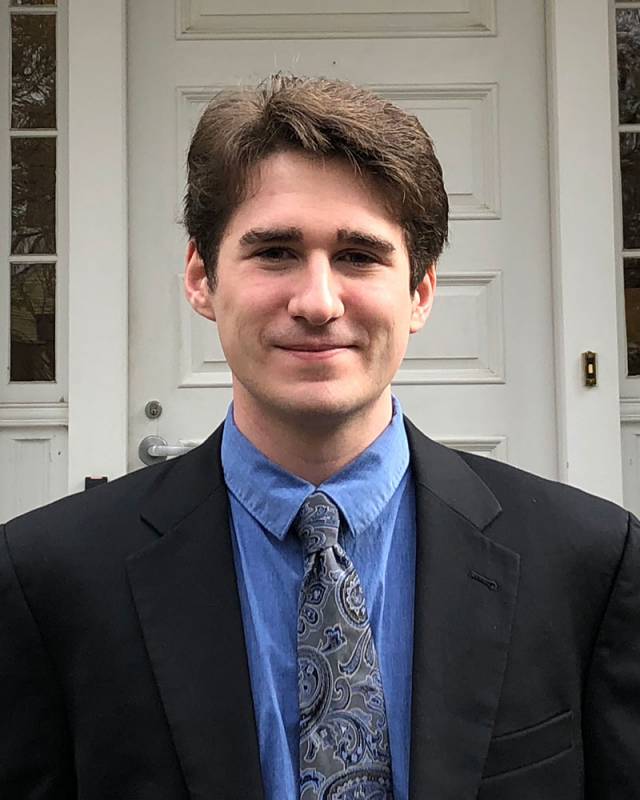 Hoffmeyer, of Florence, South Carolina, is majoring in comparative literature and pursuing certificates in Chinese language and culture and music performance (piano). At Oxford, he plans to pursue the M.St. in Modern Languages.

His research analyzes the interplay between music and literature, and his interests lie in extending access to music to more people and communities. A distinguished musician, he earned a silver medal at the 2015 Fischoff National Chamber Music Competition and was a Young Artist at the Southeastern Piano Festival, where he also helped judge the Arthur Fraser International Piano Competition.

“John is one of the most impressive undergraduate students I have met in almost two decades of teaching at Princeton,” said Daniel Heller-Roazen, the Arthur W. Marks '19 Professor of Comparative Literature and the Council of the Humanities. “He is at once extraordinarily talented, deeply committed to learning and passionately devoted to the study of fields rarely pursued by a single student: literature, philosophy, music history and piano performance.”

Heller-Roazen added: “John has also mastered a set of skills rarely to be observed, even among our very best students. He writes about 20th century German philosophy with subtlety and precision. He's a distinguished linguist, having studied French, German and Chinese. Perhaps even more impressive is the fact that, even as he has pursued his scholarly interests, John has become a serious pianist, with a deep interest in the history of music.”

“The core of PCMS’ mission lies in musical and scholastic enrichment through accessible chances for collaboration,” Hoffmeyer said. “We place musicians in small groups based on interests, time commitment and level of experience, giving them access to coaching from Princeton faculty and performance opportunities across campus and beyond. I didn’t imagine … that through perseverance, commitment, and a shared set of ideals, we would organize a ten-concert series for the 2018-19 year, along with masterclasses, guest artists and outreach opportunities on campus and beyond.”

Hoffmeyer said his time at Oxford will allow him to grow as a scholar and a performer.

“While at Oxford, I plan to work with students and faculty on campus, along with the Oxford Chamber Music Society, to develop interdisciplinary performance opportunities like what PCMS has offered at Princeton,” he said. “The Rhodes Scholarship thus offers me the chance to foster enriching collaborative opportunities between musical performance and academic scholarship through inter-institutional and international exchange, and these experiences would carry me into my career path.”

Following his studies at Oxford, Hoffmeyer said he hopes to complete a Ph.D. in music or comparative literature, and present lecture-recitals that cross between music, literature and philosophy.

Hoffmeyer is a member of Mathey College at Princeton. He also is the Princeton ambassador for the Intercollegiate Chamber Music Festival, a student representative on the Princeton University Concerts Committee and a fellow at the Writing Center. He previously was co-president of the student music ensemble Opus 21, a member of the Princeton Shakespeare Company and a co-project leader of Princeton Music Outreach. 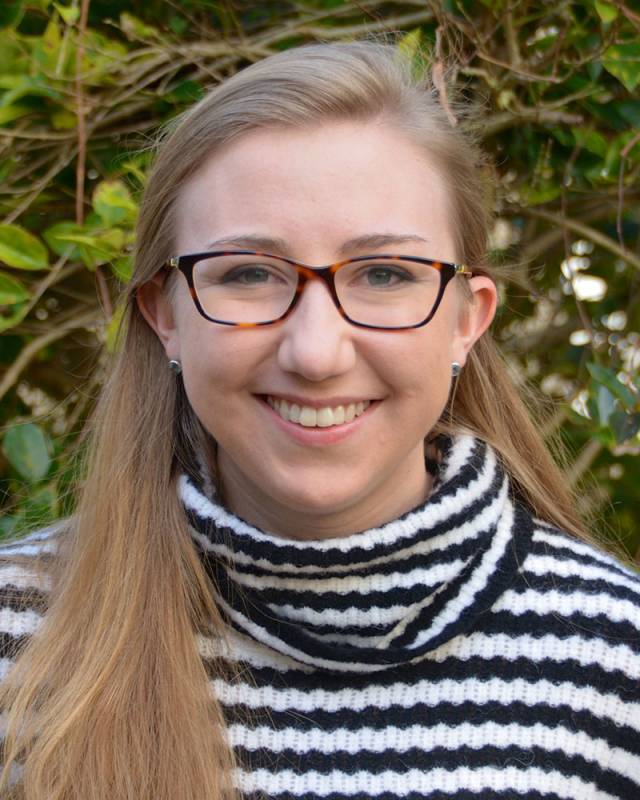 Reed, of Arnold, Maryland, is majoring in history with certificates in Latin American studies and Spanish. At Oxford, she plans to pursue the M.Phil. in Development Studies.

Reed’s research focuses on the relationship between the U.S. and Latin America, and how shared histories shape the present. She is a two-time recipient of Princeton’s Shapiro Prize for Academic Excellence and was elected to Phi Beta Kappa this fall. She is a member of Rockefeller College.

“In over a quarter century of teaching at Princeton University, I have never had the pleasure of working with such a brilliant and original student,” said Jeremy Adelman, the Henry Charles Lea Professor of History. “She is independent, a leader, articulate — and thoughtful and caring. Normally I am averse to genetic claims about peoples’ preferences, but Kate Reed is a born historian.”

After earning her degree at Oxford, Reed plans to pursue a Ph.D. in history and hopes to work as a professor and educator, thinking about the ways history can help create a more empathetic present and future.

“At and after Oxford, I would like my work to trace the history of how we understand others, and consequently ourselves, and how a more nuanced understanding of our past might encourage greater empathy in our present,” Reed said. “I have had incredible opportunities to conduct archival research in the U.S. and Mexico, to develop classes on global history and immigration policy for immigrant students, to translate hundreds of pages for nonprofits, and to run campaigns for immigrant rights in New Jersey — experiences that have informed my desire to work at the intersection of academia and activism.”

Reed has received the Lawrence Stone and Shelby Cullom Davis Prize from Princeton’s Department of History and the Paul A. Stellhorn Award in New Jersey History. Her work has been accepted for publication in “A Contracorriente: A Journal of Latin American Studies" and "Nacla Report on the Americas.” She is co-founder of the Undergraduate Latin American History Workshop and a peer tutor for the Department of Spanish and Portuguese. She has also worked as a research assistant to three faculty members in the history department.

In 2017-18, she was an undergraduate course assistant for the class “A History of the World since 1300,” where she helped to create and teach an ESL-adapted history class for recent migrant students at Princeton High School; she continues to assist in the school’s ESL class. She is a project leader and ESL instructor with El Centro ESL through the Pace Center for Civic Engagement. The program provides free daily English classes to adult immigrants in Trenton and Princeton.

This summer, as an intern with the immigrant rights organization Make the Road NJ, Reed ran the organization’s ESL program in addition to helping with other research, community-building and advocacy projects. In summer 2017, she interned in Mexico City with the International Internship Program, working at GENDES, A.C., a nonprofit that seeks to combat gender-based violence in Mexico through research, community work and rehabilitation programs.