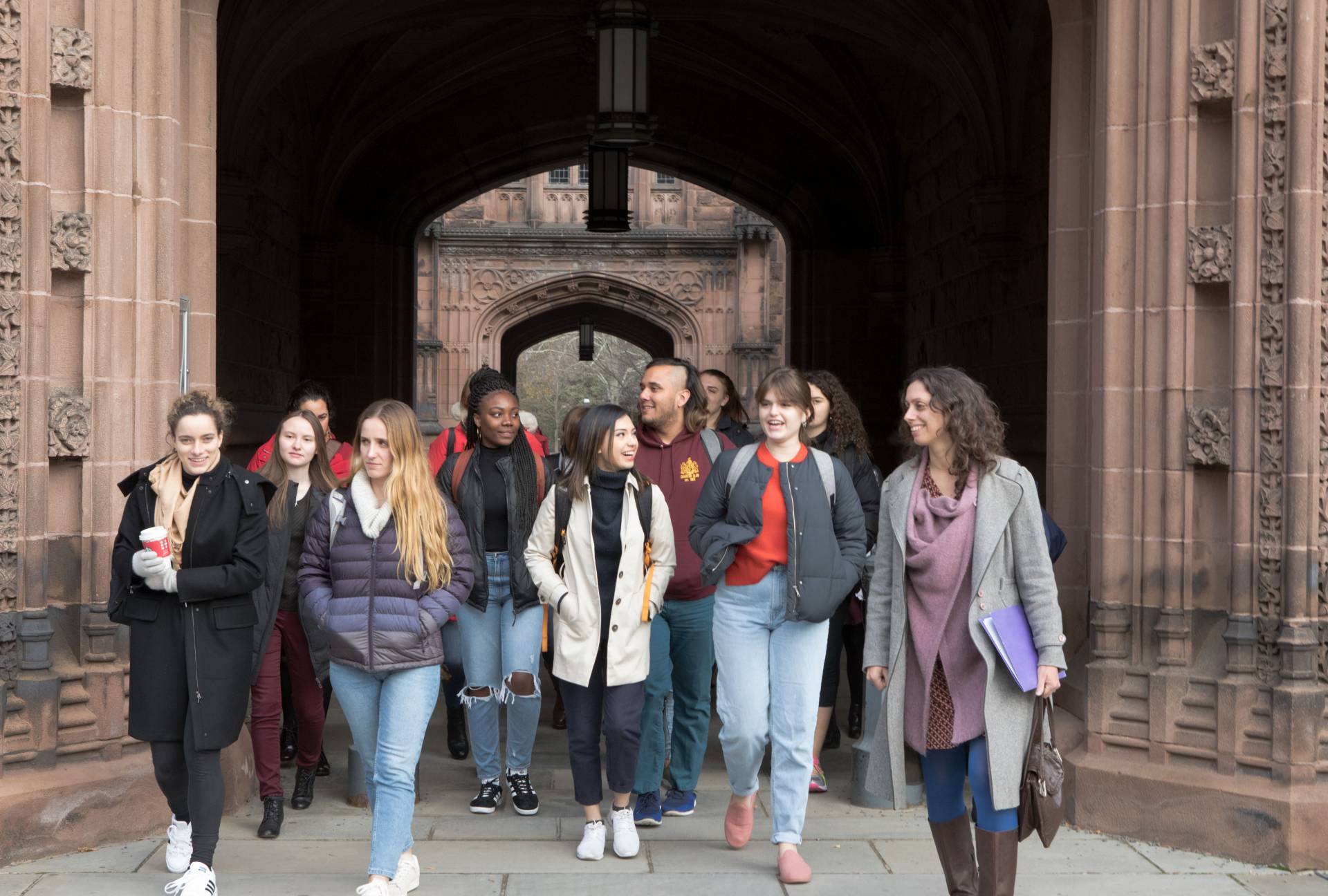 The fall course "Medical Story-Worlds" addresses questions around illness, health and the human body through a wide range of literary texts from all over the world. Above: Elena Fratto, an assistant professor of Slavic languages and literatures (far right), who structured the course as a "floating classroom," leads the class across campus for one of three guest lectures by other Princeton faculty members.

In what ways might a short story by Tolstoy or a novel by Toni Morrison illuminate aspects of medicine or disease that a medical textbook can't? And why might this engage students in the humanities as well as the sciences?

The course "Medical Story-Worlds," being taught at Princeton for the first time this fall, addresses questions around illness, health and the human body through a wide range of literary texts from all over the world.

Elena Fratto, an assistant professor of Slavic languages and literatures, and Tala Khanmalek, a postdoctoral research associate in the Program in Gender and Sexuality Studies and the Program in American Studies, are co-teaching the course, which was created for the interdisciplinary Program in Humanistic Studies.

The Humanities Council invited Fratto and Khanmalek to create a course as part of its medical humanities initiative. Medical humanities is one of the informal pathways through which students can pursue a certificate in humanistic studies, along with digital humanities and urban humanities.

Fratto's research investigates the intersections of literature and medicine. She is working on a book about the narrative structure of medical knowledge in Russia, Italy and France between 1870 and 1930. Khanmalek's research focuses on late-20th-century feminist literature by women of color and marginalized communities that were subjected to medical authority in North American borderlands before World War II.

Fratto said the course explores how imagery and storytelling are embedded in the way medical knowledge is formulated and communicated.

Khanmalek said that working with Fratto has allowed them to "put literatures that have shaped and been shaped by very different socio-historical contexts into conversation."

The class has drawn students from a range of majors — including classics, history, art and archaeology, and molecular biology — some of whom intend to go to medical school. 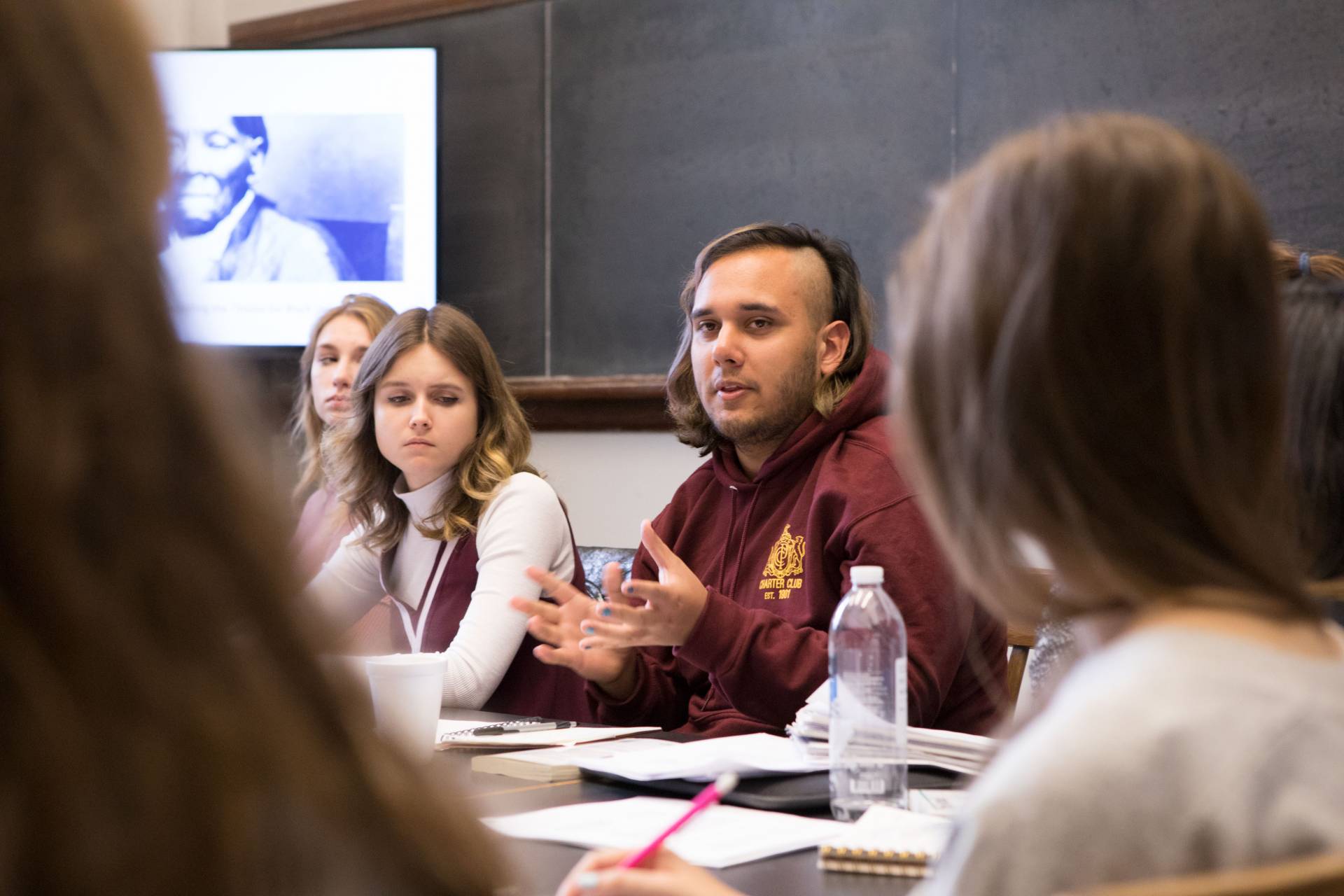 Anna Berghuis, a member of the Class of 2019 (left), and seniors Nicolette D'Angelo (center) and Nicolas Freeman debate the genre of medical case studies.

On a recent Tuesday afternoon, Fratto divided the students into two groups to debate the pros and cons of A.R. Luria's extended case study on memory, "The Mind of the Mnemonist: A Little Book About a Vast Memory," and Oliver Sacks' "The Man Who Mistook His Wife for a Hat and Other Clinical Studies," about individuals with extreme neurological disorders.

The students questioned the subjectivity and ethical implications of writing case studies.

One student commented on Sacks' writing style: "If the point is to advance medical understanding of these illnesses, he needs to reevaluate how he presents the information. He's blurring the lines between storytelling and medicine."

Another student, supporting Sacks' approach, said: "The storytelling format kind of protects the patients. If the accounts weren't popularized first in a destigmatized way, these diseases might not get into the public awareness."

Senior Nicolette D'Angelo said her takeaway from the debate was learning about "the double-edged nature of storytelling as a forum which can give agency to patients to talk about their experiences just as easily as, in other contexts, it can take agency away, even despite an author's good intentions."

A classics major who is pursuing certificates in creative writing, gender and sexuality studies, and humanistic studies, D'Angelo said she took the course to expand on her interest in the philosophy of ancient medical thought, particularly Greek medical writings on mental illness and female anatomy.

Readings include historical accounts of the spectacle of the American circus freak show from 1840-1940, Audre Lorde's 1980 collection of essays "The Cancer Journals," the 1996 French graphic novel "Epileptic" by David Beauchard and Angie Thomas' 2017 young adult novel "The Hate U Give."

Tolstoy's 1886 short story "The Death of Ivan Ilych," about a man with a terminal illness, was assigned for a discussion on "the evolution of the concept of a 'good death' from the late 19th century to present-day end-of-life protocols, ICUs and the medicalization of bereavement," Fratto said. The story explores the "power dynamics and incommunicability between the patient and doctors, the alienation of the protagonist from those who surround him, and the transformative epiphanies that his terminal illness sparks," she said.

During a guest lecture, Ruha Benjamin, an associate professor of African American studies, engages students in a discussion about the role of speculative or fictional scenarios related to scientific knowledge and the body.

A 'floating classroom': From dance studio to neuroscience lab

The course takes students out of the classroom and across campus for guest lectures given by faculty members in various disciplines.

"We wanted to build interdisciplinary bridges," Khanmalek said. "It was our hope that engaging with a wide range of viewpoints would further encourage students to participate — both individually and collectively — in a process of critically framing and reframing course topics."

During the unit on “The Body as a Laboratory," the students walked to the new Lewis Arts complex to join the students in the dance class "Power, Structure and the Human Body," taught by Aynsley Vandenbroucke, a lecturer in dance and the Lewis Center for the Arts.

Sophomore Chisom Chigozie-Nwosu, who intends to major in psychology and plans to attend medical school, said the dance class connected well to the readings: Toni Morrison's "Home" and excerpts from Harriet Washington's "Medical Apartheid: The Dark History of Medical Experimentation on Black Americans from Colonial Times to the Present."

The books address how African Americans during and after the slavery era "had been experimented on, manipulated, controlled and stripped of their humanity," said Chigozie-Nwosu, who is president of DoroBucci, the student-led African dance ensemble.

"My classmates and I were free to express ourselves in any way we saw fit because Aynsley Vandenbroucke welcomed us into an environment in which we could all take ownership of our bodies, something that many African Americans in the post-antebellum South were unable to do," she said about participating in the dance class.

Students also attended a lecture by Uri Hasson, a professor of psychology and the Princeton Neuroscience Institute, who has researched neural responses to storytelling. Khanmalek said Hasson's work exposed students to the breadth of scientific research and opened up a new interpretive lens in understanding how meaning is made.

The first set was based on a session Benjamin attended at Harvard University in 2016, in which a team of researchers were considering the genetic development necessary for a human with no need to eat, framed in the context of global food scarcity. The other two sets speculated on scenarios related to the body 200 years in the past and 200 years in the future.

"My aim with the [class] presentation was to prompt students to reflect on the stories embedded in the life sciences, and to trouble the boundary between what we deem fictional and factual," said Benjamin, who is trained as a sociologist.

Senior Nicolas Freeman, a molecular biology major who is pursuing a certificate in creative writing and plans to go to medical school, enjoyed the discussion on speculation. "My creative thesis, a collection of poems, focuses on the intersections of medicine, science, race, and queer and trans identity," they said. "By speculating about the future or past in our work, we are asked to reflect about our present, about what could be, about what's important."

Benjamin, who is teaching a course this semester called "Black to the Future: Science, Fiction and Society," likes the idea of "a floating classroom." She particularly enjoyed when the students "started posing questions to one another and riffing off of one another’s ideas," she said. "I walked away thinking, 'Wow! I hadn’t even considered that. …' My favorite moments are when the teacher becomes the student." 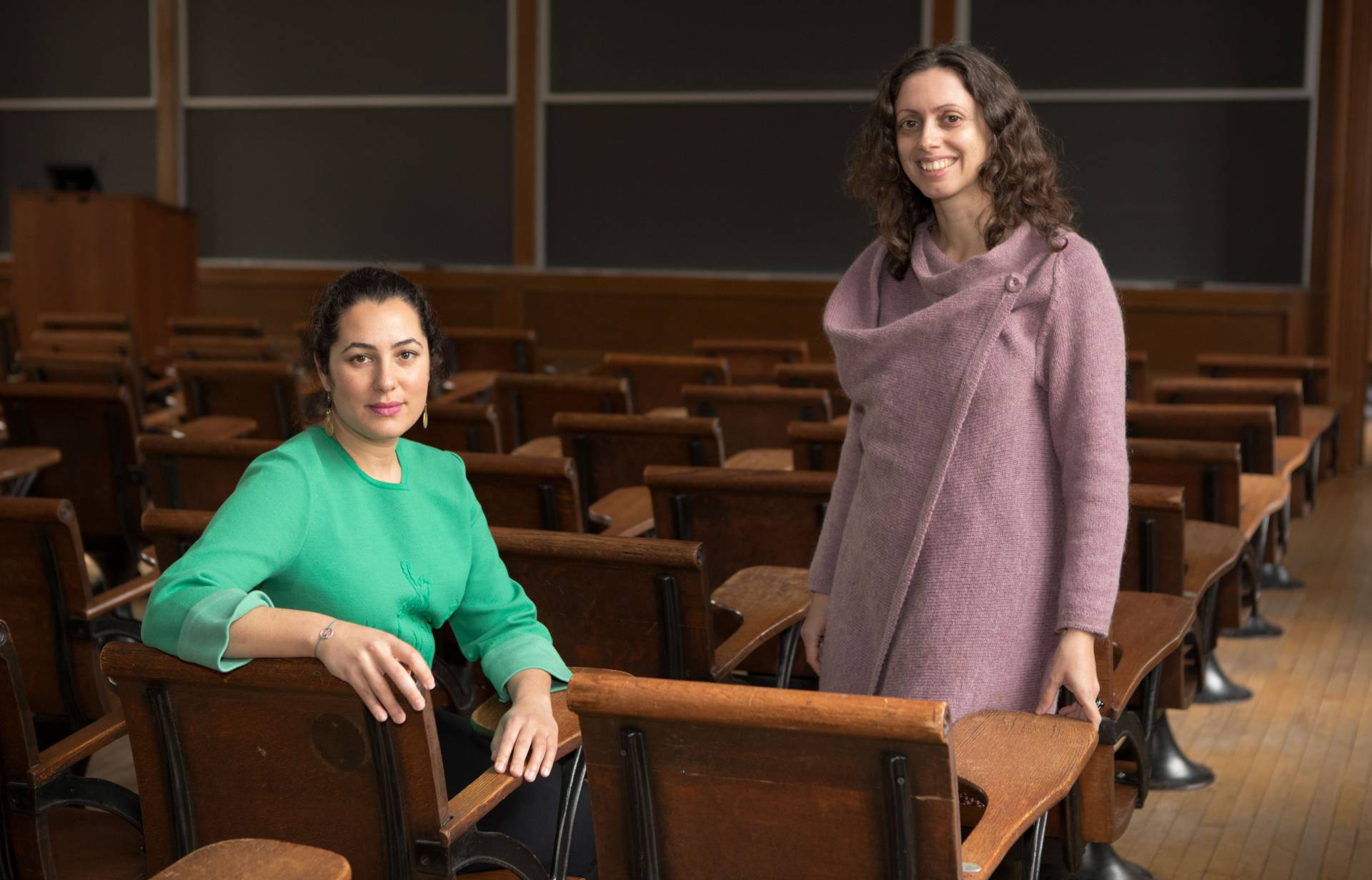 Tala Khanmalek (left), a postdoctoral research associate in the Program in Gender and Sexuality Studies and the Program in American Studies, is co-teaching the course with Fratto (right). The course "explores how imagery and storytelling are embedded in the way medical knowledge is formulated and communicated," Fratto said.

Fratto said Khanmalek's focus on how class, race, gender, sexual orientation and ability "are inextricably intertwined" has shed new light on the way she looks at narratives about the human body. "Working with Tala and learning about her work has been a truly enriching experience," she said.

Khanmalek admires Fratto's "dynamic approach to lecturing." She said she is also grateful for the opportunity to learn "just as much if not more than the students from Elena's expertise on the production of medical knowledge in Russia and the Soviet Union."

Another highlight for Khanmalek has come from the students, many of whom "have drawn from personal stories to shed light on key concepts and in doing so, build upon the medical story-worlds we explore by way of their own situated realities," she said.

"Medical Story-Worlds" is a project funded by the David A. Gardner '69 Magic Project Grants under the auspices of the Humanities Council. It includes a pedagogical component — the undergraduate course — and a research component called the Bodies of Knowledge Working Group. The group is hosted by Fratto and Khanmalek and is meeting for several events throughout this year, each led by a scholar from another academic institution. "Its purpose is to engage faculty, graduate students, staff and members of the Princeton community in questions around illness, health and the body from a wide range of viewpoints," Fratto said.

For the love of Earth: A humanistic inquiry