Princeton junior Nicolette D'Angelo has been awarded a Beinecke Scholarship, which supports promising students in their graduate studies in the arts, humanities and social sciences.

D'Angelo, who is from Hewitt, New Jersey, is a classics major who is pursuing certificates in gender and sexuality studies, humanistic studies and creative writing (poetry). She plans to pursue a Ph.D. in classics and a career in academia.

She is one of 18 students from around the country to be awarded 2018 Beinecke Scholarships, which provide each winner with $4,000 immediately prior to entering graduate school and an additional $30,000 while attending graduate school. The awards were established in 1971 and are administered by the Sperry Fund. 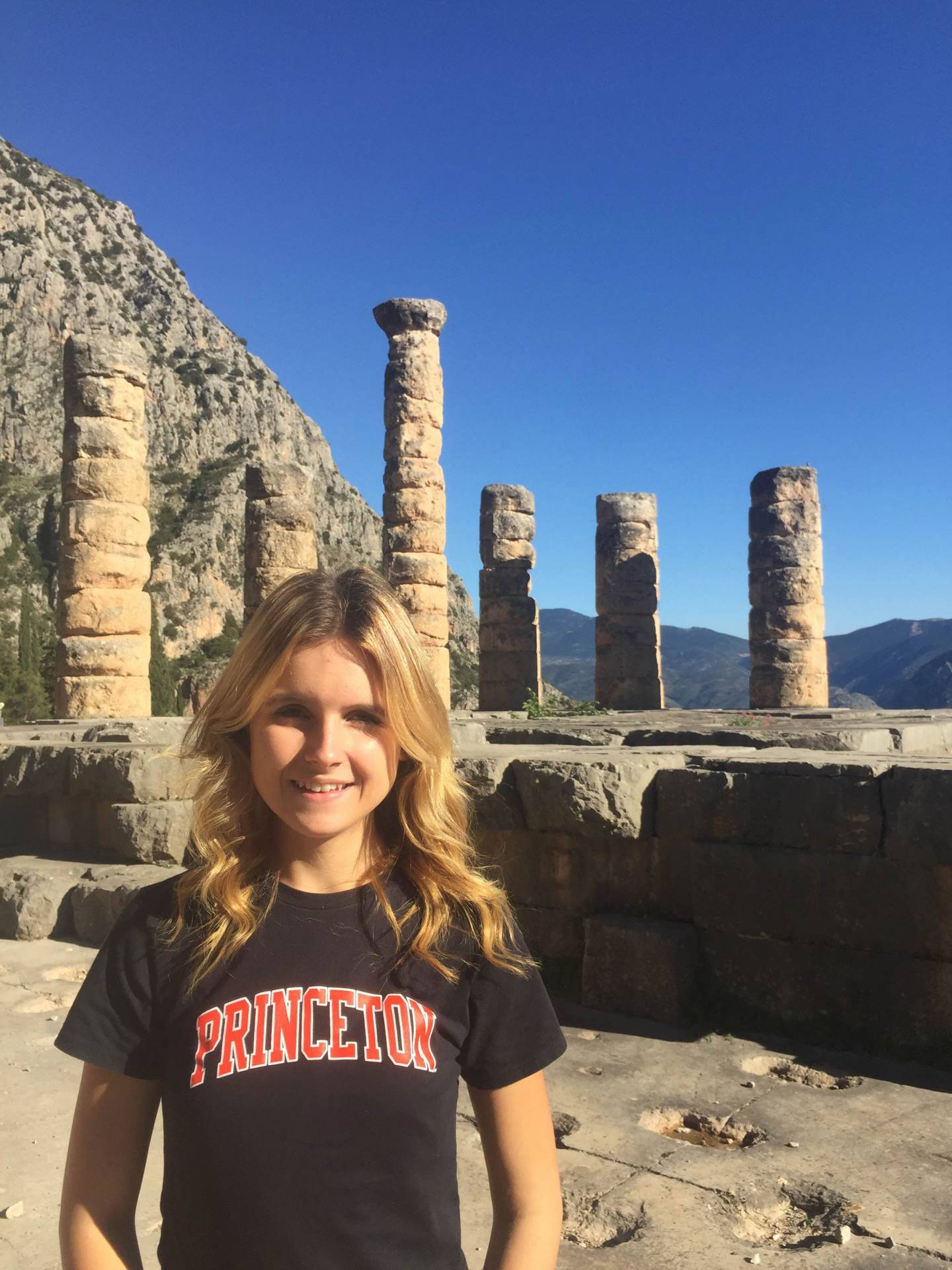 As a first-generation student from a public school without Greek or Latin courses, D'Angelo had no exposure to classics before coming to Princeton. In her application for the scholarship, she wrote that her passion for classics was sparked in her first year at Princeton during the Humanities Sequence, a year-long, team-taught survey of the Western canon starting with Homer through 20th-century literary texts.

"I realized that at the heart of these texts were concerns about war, gender and sexuality, migration, inequality: concerns not foreign to those of family and friends at home," she wrote. "I've since dedicated the entirety of my university education to highlighting this contemporary relevance through traditional as well as creative approaches."

During fall break of her sophomore year, D'Angelo traveled with other Humanities Sequence "alumni" to Greece, where she conducted an independent research project on polychromy in the costumes of ancient Greek tragedy. She will spend this summer in Rome as a development and outreach intern at the Paideia Institute, a classics nonprofit organization.

Her fall junior paper focused on the text "On the Order of My Own Books" by Galen, an influential physician during the Roman empire. Her spring junior paper is a translation of Euripides' "Suppliants," which, she said, focuses "on tensions between Greek mourning mothers and the politics of burial, to explore the play's urgent relevance to the contemporary question of who is considered a proper body in the eyes of the state."

Her senior thesis, which grew out of her reading of Galen's views on the female reproductive system, explores the intersections of ancient Greek medicine and gender, or, as she frames it, "what bodies matter," in particular hysteria as a disease concept from Hippocrates to Freud.

D'Angelo has also used creative writing to explore topics of the body. In summer 2017, with funding from the Lewis Center for the Arts, she began to create "Guesthouse: Voices from Eating Disorder Facilities in America," a book of "found" poetry — poetry compiled from overheard or seen sources.

Traveling across the United States, she interviewed patients in treatment centers and support groups. "Naturally, the most significant part of my research was listening, gathering phrases, as people with different regional idiom and medical jargon all give distinct voice to their lived experiences," she wrote. D'Angelo was honored with the Sam Hutton Fund Award from the Lewis Center for the project, which she continues to work on.

Other academic honors include the Shapiro Prize for Academic Excellence her first year and sophomore year, the Award for Outstanding Work by an Underclassman (creative writing) from the Lewis Center her first year, and the Bain-Swiggett Poetry Prize from the Department of English her sophomore year. She is a member of the Behrman Undergraduate Society of Fellows, which brings together juniors and seniors committed to the study of humanistic inquiry.

In a recommendation letter, Yelena Baraz, associate professor of classics, wrote that D'Angelo, who mastered Latin in under two years at Princeton and Greek in one summer intensive, "is much more than a language prodigy. She is an insightful reader of literature, a writer herself and a theoretically astute thinker. ... Nicolette is an ideal student, but she is more than that: she is a student in whom it is easy to see a future colleague. And she will be the one who will tell her students that they don't need to have years of Latin to be a classicist, to belong in this field, and to read these texts."

D'Angelo is a member of Mathey College, where she serves as a residential college adviser. She is also editor-in-chief of The Nassau Literary Review, a writing fellow of the Princeton University Writing Center, a head symposiarch and peer mentor in the Humanities Council and a student ambassador in the humanities for Princeton Research Day. She has served as a Community Action orientation leader for the Pace Center for Civic Engagement, designed costumes for the Princeton Shakespeare Company, sung with the University Chapel Choir and contributed to The Nassau Weekly and Stripe magazine. She teaches Latin to local elementary school students through Princeton Young Achievers and the Paideia Institute.