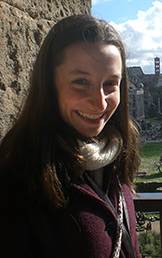 Princeton junior Mary Rosalie Stoner has been awarded a Beinecke Scholarship, which supports promising students in their graduate studies in the arts, humanities and social sciences.

Stoner, who is from Gretna, La., is a classics major. She plans to pursue a master's or doctoral degree in classics and hopes to become a professor.

Stoner is one of 20 students from around the country to be awarded 2014 Beinecke Scholarships, which provide each winner with $4,000 immediately prior to entering graduate school and an additional $30,000 while attending graduate school. The awards were established in 1971 and are administered by the Sperry Fund.

"The humanities are a vibrant academic field but I have also discovered in them a fruitful basis for starting conversations, enjoying camaraderie and developing friendships with people of many different background and aspirations," Stoner wrote in her application.

Stoner is primarily interested in early Christian writers of Latin. She hopes her studies as a graduate student "from the discipline of classics rather than theology" will help contribute to broad questions such as: "What does a classical education signify for the contemporary Christian, and how do these attitudes reflect continuity with and departure from the old ways?"

In his recommendation letter, Anthony Grafton, the Henry Putnam Professor of History, wrote:
"[Rosalie] has been a consistently outstanding student, who has chosen to see her education at Princeton as a wonderfully varied set of opportunities: on the one hand, to master Latin and Greek, especially Latin, and to follow the afterlife of the classical tradition in thought and literature in a world that became Christian; and on the other hand, to explore the whole range of Western intellectual and cultural history."

Stoner is spending this semester in Rome with the Intercollegiate Center for Classical Studies, a program designed to introduce students from a variety of American universities to the structures and stories of the ancient city of Rome and its environs on-site. In addition to her coursework, she is writing an independent paper on the first-century Roman rhetorician and teacher Quintilian and his idea of a moral education.