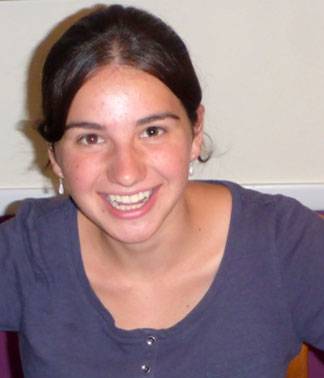 Senior Ayelet Wenger has been awarded the Keasbey Scholarship, which provides the opportunity to study at selected British universities.

Wenger, of Columbus, Ohio, is a classics major who is also pursuing certificates in Judaic studies and Hellenic studies. She will pursue an M.Phil. in Judaism and Christianity in the Graeco-Roman World at the University of Oxford.

At Princeton, she received the Program in Creative Writing's award for outstanding work by a sophomore. Since fall 2015, she has been a member of the Behrman Undergraduate Society of Fellows, a group of juniors and seniors who are committed to the study of humanistic inquiry. She received a Rothberg International School Merit Scholarship in fall 2015.

In addition to spending a semester abroad in Israel in fall 2015, she has also spent time in Germany, Greece and Italy in conjunction with her studies. A member of Whitman College, one of Princeton's six residential colleges, she spent her junior year living in another residential college, Mathey College, with the Edwards Collective, a group of around 35 students who have applied to live together in a residential community that celebrates the humanities and creative arts.

Wenger's senior thesis, for which she received Princeton grants to pursue archival research in Jerusalem, "offers evidence for conversation between medieval rabbinic and Christian scholars by pointing out Latin and Byzantine Greek influences in an 11th-century rabbinic dictionary," Wenger said.

Joshua Katz, the Cotsen Professor in the Humanities and professor of classics, commended Wenger's scholarship in the classroom and in independent work. He is her senior thesis co-adviser, with Anthony Grafton, the Henry Putnam University Professor of History, and taught Wenger in two classics courses: "Topics in Greek Literature: Hesiod" in spring 2016 and "Historical and Comparative Grammar of Greek" in fall 2016.

"Ayelet Wenger's engagement with the material and easy capacity for seeing and neatly articulating things that as far as I know no one had seen or quite articulated before — and to do so in almost every class meeting and in each of the three essay assignments — was nothing short of astonishing," said Katz.

"Ms. Wenger has a scintillating sense of humor, an eye for the absurd, and genuine kindness, affection and empathy for the people around her. She is already in a real sense my colleague rather than my student," Katz said.

Wenger also studies ancient Greek, Latin, Biblical and Rabbinic Hebrew, Jewish Babylonian Aramaic and German, is fluent in modern Hebrew, and is self-taught to read Syriac, a dialect of Aramaic.

Ultimately, she plans to study and teach ancient texts.

Outside the classroom, Wenger founded the Undergraduate Judaic Studies Conference, co-organized Muslim-Jewish writing events and served on the Princeton Orthodox Jewish Student Board. She is also an assistant poetry editor for The Nassau Literary Review.