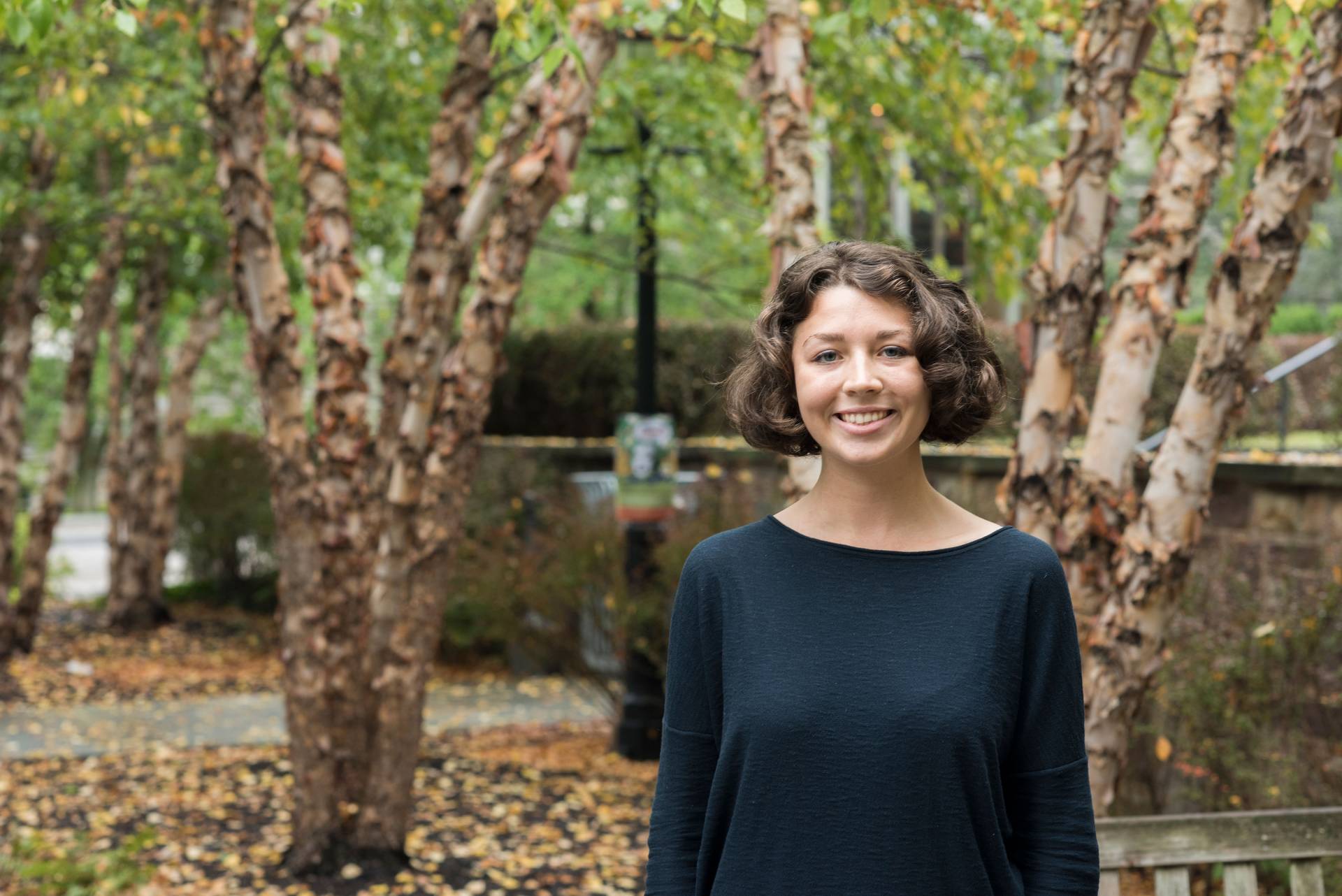 Photo by the Humanities Council

Princeton University senior Claire Ashmead has been awarded a Witherspoon Scholarship to study writing at the University of Edinburgh in Scotland. Established in 2015, the scholarship honors the historic ties between Princeton and Edinburgh, highlighting the role of John Witherspoon at both institutions, and is awarded annually to a Princeton senior. Ashmead is expected to begin her studies at Edinburgh in September.

A native of University Heights, Ohio, Ashmead is a history major who is also earning certificates in Chinese language and culture, creative writing and humanistic studies. She wrote two senior theses: a comparative study of artists on trial during McCarthyism and the Chinese Cultural Revolution; and, for her certificate in creative writing, a novella "The Camel-Haired Coat," about a young woman whose grief summons the ghost of her mother.

"The University of Edinburgh is the perfect place for me to pursue a more intensive education in creative writing, with a strong research component," Ashmead wrote in her application. "I look forward to working on fiction that synthesizes historical research with a vivid imagination."

Ashmead said that as a writer and a historian she is looking forward to immersing herself in the "storied history" of Edinburgh.

"The literary and dramatic opportunities in Edinburgh are phenomenal," said Ashmead, who also plans to take supplementary courses in either literature or medieval languages. "Not to mention that I can't wait to explore ancient Celtic and medieval sites in the Scottish landscape — including taking advantage of Edinburgh's wealth of medieval documents and art objects. These settings and worlds will then probably work their way into my fiction!"

She admits that "becoming an author is very difficult," so she plans to take advantage of several opportunities at Edinburgh. "I want to explore other avenues of keeping those creative and intellectual parts of my soul engaged," she said. She is interested in academics — as a professor or teacher — and diplomacy, which would allow her to use the languages she has studied: French, German and Mandarin.

At Princeton, Ashmead has immersed herself in writing, theater and history and has enjoyed many opportunities to pursue these interests abroad. As part of Princeton's Bridge Year Program — nine months of service prior to beginning her first year — she volunteered at a nongovernmental organization in Kunming, China, where she evaluated water infrastructure renewal in drought-affected areas. Her studies have also taken her to France, Germany, Greece and Japan. In summer 2016, she received a grant from the Lewis Center for the Arts to visit estates of female authors in Denmark and England as part of her senior thesis research.

"Claire is an exceptionally bright, poised and articulate student, said Eugenides. "I knew when I first taught her, her first year at Princeton, that she would go on to do great things here. And so she has."

He noted that Jhumpa Lahiri, professor of creative writing in the Lewis Center for the Arts, who served as the first reader of Ashmead's novella, also commended the young writer. She stated: "This is a dark drama handled with finesse, a robust and playful novel that takes risks and, for all its fantastical elements, feels urgent and true. One could call it a contemporary hybrid of Henry James, Lewis Carroll and Edgar Allan Poe. But 'The Camel-Haired Coat' is an innovative and disarming work of fiction, and Ashmead's voice haunts from beginning to end."

Outside the classroom, Ashmead served as head writer for the Triangle Club for the past two years, overseeing 12 writers to create and produce two major musical comedies. She wrote sketch comedy and monologue jokes for Princeton's monthly student-led late night talk show "All-Nighter" and acted in the student French theater troupe L’Avant-Scène.

She also served as a tutor in math and English with the Petey Greene prison education program and coordinated a weekly independent seminar on current events.

Ashmead is a member of the Behrman Undergraduate Society of Fellows. This group of students meet monthly to explore topics in literature and philosophy, and serve as mentors to first-year students taking the Humanities Sequence, a yearlong, team-taught course that examines Western history, philosophy and literature from antiquity to the 20th century.

She is also a fellow in the Program on Religion, Diplomacy and International Relations; the Edwards Collective, a group of around 35 students who live together in a residential community in Mathey College that celebrates the humanities and creative arts; the Human Values Forum; and the James Madison Program in Ideals and Institutions.