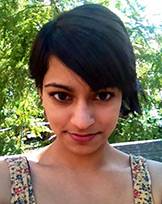 Princeton junior Varshini Narayanan has been awarded a Beinecke Scholarship, which supports promising students in their graduate studies in the arts, humanities and social sciences.

Narayanan, who is from Scotch Plains, New Jersey, is an anthropology major and is pursuing certificates in Spanish language and culture and musical performance. She plans to pursue a Ph.D. in anthropology and a career in academia.

She is one of 20 students from around the country to be awarded 2015 Beinecke Scholarships, which provide each winner with $4,000 immediately prior to entering graduate school and an additional $30,000 while attending graduate school. The awards were established in 1971 and are administered by the Sperry Fund.

In her application for the scholarship, Narayanan wrote that her interest in anthropology was sparked in part by her experience as the daughter of Indian immigrants and a childhood "divided between a conventionally American school system and the vibrant community of the South Indian diaspora, complete with weekly religion classes, Carnatic music lessons and concerts, and the occasional Diwali celebration rife with illicit sparklers."

At Princeton, her independent research has focused on the intersection between indigenous musical traditions and cultural identity and the ways they inform one another. Her junior paper is titled "Powwow: Articulating Contemporary Identities in Native North America."

She plans to spend the summer doing ethnographic research in southern Spain, working toward a senior thesis on the pedagogy of flamenco music.

"My deepest academic and co-curricular passions have always laid at the intersection between the arts, humanities and social sciences — that is to say, identity, language and human interaction," she wrote.

In a recommendation letter, Carol Greenhouse, the Arthur W. Marks '19 Professor of Anthropology and chair of the Department of Anthropology, wrote that Narayanan "has a great talent for anthropology — particularly along the horizon where ethnography intersects with linguistics. She may make other discoveries along the way. What is certain is that she has the motivation, skills and 'gift' for advanced study of the highest caliber."