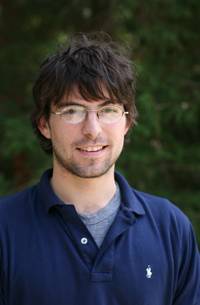 Princeton junior Christopher Douthitt has won the Beinecke Scholarship, which gives highly motivated students of exceptional promise the opportunity to pursue graduate studies in the arts, humanities and social sciences.

Douthitt, who is from Spokane, Wash., is majoring in music with a focus on theory and composition. A member of the Undergraduate Composers' Ensemble, he hopes to pursue a master's degree in music theory or composition at a graduate school or conservatory.

The scholarship, administered by the Sperry Fund, will provide Douthitt with $2,000 just before he enters graduate school and an additional $30,000 while he is enrolled.

For his spring junior project, Douthitt wrote three songs for voice, guitar, percussion, synthesizer, alto saxophone, cello and violin, which were performed at a concert on campus. He also wrote and arranged songs for a rock band in Spokane last summer, and composed and recorded a CD of original songs in 2003.

He sings tenor in Princeton's Chapel Choir and is a member of limbic, a writing group and poetry journal. Douthitt, who twice won the Shapiro Prize for Academic Excellence, also tutors students in the University's Writing Center.

A National Merit Scholar, he was the 2002 valedictorian at Lewis and Clark High School in Spokane.