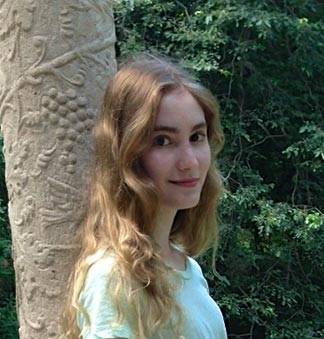 Princeton junior Joani Etskovitz has been awarded a Beinecke Scholarship, which supports promising students in their graduate studies in the arts, humanities and social sciences.

Etskovitz, who is from Wayne, Pennsylvania, is an English major who is pursuing certificates in humanistic studies and European cultural studies. She plans to pursue a Ph.D. in English literature and a career in academia.

She is one of 20 students from around the country to be awarded 2016 Beinecke Scholarships, which provide each winner with $4,000 immediately prior to entering graduate school and an additional $30,000 while attending graduate school. The awards were established in 1971 and are administered by the Sperry Fund.

In her application for the scholarship, Etskovitz wrote that sharing her "research interests and enthusiasm for 19th-century British and European literature with future students and readers" is rooted in her "lifelong love of museums and libraries" and two experiences in particular: working with students from underserved communities in the Cotsen Children's Library at Princeton; and working in the Library of Congress' Young Readers Center last summer while helping to plan its celebration of the 150th anniversary of Lewis Carroll's "Alice's Adventures in Wonderland."

At Princeton, her independent research for her fall semester junior paper focused on how curiosity is the heroine of "Alice's Adventures in Wonderland." "Embodied in Alice, the dynamism of curiosity gives the child agency in an environment of wonder, makes her the author of her own adventures and creates curious readers," Etskovitz wrote.

Working toward a senior thesis on curiosity and literary imagination, Etskovitz will continue her research this summer as a Princeton Bread Loaf fellow at Oxford University's Lincoln College. The Princeton Department of English selects three rising seniors each year to receive a scholarship to the Bread Loaf Program. At Oxford's Bodleian Library, she will broaden her research on curiosity in relation to other 19th-century British and French texts and will explore additional resources in Oxford and London, including the Victoria & Albert Museum, where "I will study the power of material curiosities to elicit illicit curiosity in 19th-century women and children," she wrote.

In a recommendation letter, Susan Wolfson, professor of English, wrote: "[Joani] is brilliant, hard-working, independently motivated, resourceful, savvy about how to read primary and secondary texts. She takes advice and runs with it, and she cares deeply about the craft of expository criticism, putting her writing through draft after draft to achieve what seems like effortless sparkle."

Etskovitz, a member of Wilson College, won the Shapiro Prize for Academic Excellence, given to select sophomores, in 2015. She is a member of the Behrman Undergraduate Society of Fellows, which brings together juniors and seniors committed to the study of humanistic inquiry, and the Princeton University Glee Club. She also serves as a tutor for underclassmen in the yearlong humanities sequence and for graduate students and postdocs learning English as a second language, under the auspices of the McGraw Center for Teaching and Learning.