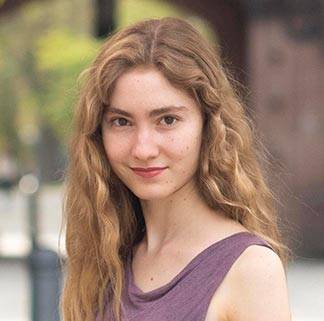 Princeton senior Joani Etskovitz has been named a 2017 Marshall Scholar. The Marshall Scholarship covers the cost of graduate study and living at a British university of the recipient's choice for up to two years. Marshall Scholarships help build strong ties with the United states by giving young Americans of high ability and leadership potential the opportunity to study at universities in the United Kingdom. In 2017, 40 students will join the program, an increase from the 32 places originally planned for the year.

Etskovitz, who is from Wayne, Pennsylvania, is an English major who is pursuing certificates in humanistic studies and European cultural studies.

A member of the Princeton University Glee Club, Etskovitz received the news of her award in Princeton's Woolworth Center, where she had just finished rehearsing Stravinsky's "Les Noces," for a Dec. 11 performance celebrating the 50th anniversary of the composer's residence at the University.

"The British Consulate had called during the rehearsal and left a message with instructions to call back. I was standing with one of my best friends — a fellow Glee Club member — when I returned the call," she said. "Upon receiving the news, I was elated, energized, humbled and incredibly thankful for the opportunity to continue pursuing my academic passions. I immediately contacted my advisers and parents to share my utter joy and gratitude."

In 2015, Etskovitz co-curated an exhibition of rare children's literature and art and helped plan events for the Library of Congress' 150th anniversary celebration of Lewis Carroll's "Alice's Adventures in Wonderland." In her application for the Marshall Scholarship, Etskovitz wrote: "Working to foster literacy in children from some of Washington [D.C.]'s poorest schools, I saw firsthand how Lewis Carroll's wordplay and riddles make reluctant readers curiouser — a word of Alice's invention — about language and learning. ... Embodied in Alice, the dynamism of curiosity gives the child agency in an environment of wonder, makes her the author of her own adventures and creates curious readers."

For her senior thesis on curiosity and literary imagination, Etskovitz conducted research last summer as a Princeton Bread Loaf fellow at Oxford's Lincoln College. The Princeton Department of English selects three rising seniors each year to receive a scholarship to the program. At Oxford's Bodleian Library, she broadened her research on curiosity in relation to other 19th-century British and French texts and explored additional resources in Oxford and London, including the Victoria and Albert Museum, and in Paris. During that summer she also participated in Princeton's French language immersion program in Aix-en-Provence. In summer 2015, she participated in the PIIRS Global Seminar "Thessaloniki: 2,000 Years of a City in History" in Greece.

On campus, Etskovitz is an assistant to Curator Andrea Immel and Outreach Director Dana Sheridan at the Cotsen Children's Library, housed in Firestone Library, where she helps catalog and research rare children's literature and participates in planning and hosting free education events such as Tiger Tales Story Time.

"Joani Etskovitz has all the makings of a first-rate public intellectual: she fervently believes in the good of literacy and the public value of scholarship and art," said Nigel Smith, the William and Annie S. Paton Foundation Professor of Ancient and Modern Literature. "Her razor-sharp critical scholarship is of the highest order: analytically precise and formidably well-written. She is also a most imaginative curator. In the not-too-distant future, she will be challenging and changing our perceptions, and all for the better," he said.

As a Marshall Scholar, Etskovitz said she is "looking forward to contributing to the Bodleian Library's budding public engagement initiatives, curating at least one exhibition of rare 19th-century children's literature and working with expert scholars to develop my independent research and future book on Victorian women's and children's intellectual and imaginative agency."

After completing her graduate studies in the United Kingdom, Etskovitz plans to pursue a Ph.D. in English literature and a career in academia.

"It is my lifelong professional ambition to inspire underserved students' curiosity about literature and thereby foster literacy," she said. "My scholarship, archival exhibitions and educational outreach will demonstrate how women’s and children's 19th-century literature inspired and can still spark literacy and intellectual development in underserved groups."

"Joani Etskovitz arrived at Princeton wanting to be a university professor, and I see no change in her plans, unless she were to become a museum or library curator in addition," said Joshua Katz, the Cotsen Professor in the Humanities and professor of classics, who met Etskovitz when she took his freshman seminar "Ancient Egypt and Its Hieroglyphs." In fall of her junior year, she took Katz's "Introduction to Indo-European" course, cross-listed in classics and linguistics.

"Ms. Etskovitz takes every possible advantage of every opportunity afforded to her, immersing herself in new experiences so as to be a better person, a better scholar, and perhaps above all a better teacher," Katz said. "Not someone whose world until recently was large from the point of view of her passport, Ms. Etskovitz has a magical ability to draw down the universe to herself through careful research and unrivaled imagination."

Etskovitz, a member of Wilson College, won the Shapiro Prize for Academic Excellence in 2015. She also received a 2016 Beinecke Scholarship, which provides funding for postgraduate study. She is a member of the Behrman Undergraduate Society of Fellows, which brings together juniors and seniors committed to the study of humanistic inquiry. She also serves as a mentor for underclassmen in the yearlong humanities sequence and a tutor for graduate students and postdocs learning English as a second language, under the auspices of the McGraw Center for Teaching and Learning.