Princeton University senior Annabel Barry has been named a George J. Mitchell Scholar to study philosophy and literature at University College Dublin (UCD). Twelve Mitchell Scholarships were awarded to students nationwide by the nonprofit U.S.-Ireland Alliance based in Washington, D.C. 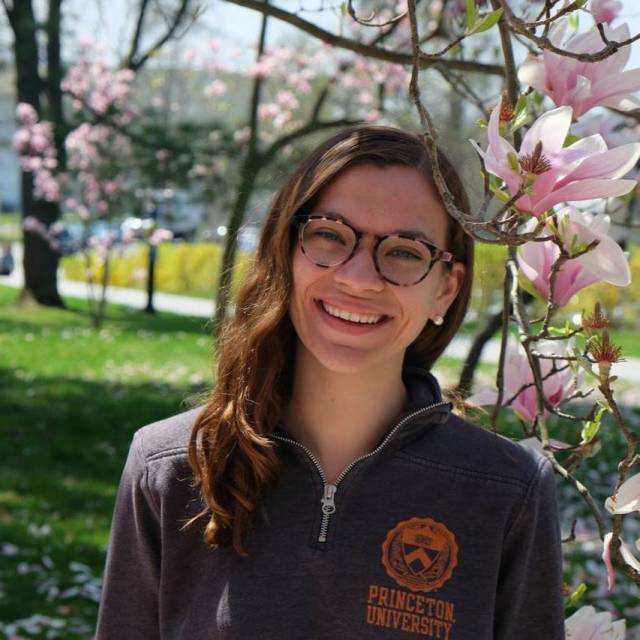 “I’m excited to have the opportunity to study at UCD, a school with a strong institutional commitment to social justice and public service,” Barry said. “The professors I will work with are not only incredible scholars, but are also active in LGBT and women’s rights advocacy in Ireland. I’m also looking forward to living in Dublin because of its literary history and vibrant contemporary theater scene.”

The Mitchell Scholarships recognize outstanding academic distinction, leadership and service. Chosen from 370 applicants, the recipients will spend a year of postgraduate study at institutions of higher learning in Ireland. The program is named in honor of Senator George Mitchell’s contributions to the Northern Ireland peace process.

“Keenly observant, Annabel catches hold of the complications of poetry and philosophy, marking and measuring even the slightest traces we make on our lived and written world,” said Sarah Anderson, lecturer in English.

In summer 2017, with a Tim K. Vasen Summer Research Award from Princeton’s Lewis Center for the Arts, Barry traveled along the border between Ireland and Northern Ireland, researching and writing a collection of creative nonfiction. This led to a junior independent paper on postcolonial critiques of cartography in contemporary Irish literature.

Anderson said Barry will build on this research at UCD. “By imagining boundaries so deeply and through diverse texts, Annabel will work toward much larger projects of infiltrating and investigating the bloodied map of Ireland. As a Mitchell Scholar, Annabel will voice questions of exile and inclusion and of how these issues are racialized and gendered in ways that will help us see our way through these troubles,” she said.

This past summer, Barry was a Princeton Bread Loaf Fellow at Oxford University, where she took a class on James Joyce and conducted senior thesis research on feminist philosopher and writer Mary Wollstonecraft in the Abinger Papers of the Bodleian Library.

As a set designer, Barry has worked on productions with the Lewis Center for the Arts and with the student-led troupes Theatre Intime and Princeton Shakespeare Company. She has also delved into puppetry design.

Jane Cox, senior lecturer in theater in the Lewis Center for the Arts and director of the Program in Theater, who has served as Barry’s adviser on some of these projects, called her design work “extremely sophisticated.” Barry took Cox’s advanced design studio class two years in a row.

“[H]er work reflects a deep understanding of text (narrative ideas and dialogue as well as more lyrical ideas), a strong grasp of imagery in both literary and visual form [and] a gifted design eye,” Cox said. “Annabel distinguishes herself through her deep intelligence, hard work, passion and her willingness to collaborate thoughtfully with peers.”

Earlier this fall, Barry received the George B. Wood Legacy Junior Prize, awarded to a member of the senior class in recognition of exceptional academic achievement during the junior year. She received the Shapiro Prize for Academic Excellence after her sophomore year. Awards from the English department include co-winner of the Class of 1870 Junior Prize, the Frances Biddle Sophomore Prize for the best essay of the year in English literature and the Class of 1883 Prize for Academic Freshmen.

In addition to working with student theater groups, Barry has engaged in a wide range of activities outside the classroom.

She is a member of Whitman College, where she is a peer academic adviser. She is co-editor-in-chief of The Nassau Literary Review, a fellow in the Writing Center and the undergraduate coordinator of the Princeton chapter of Minorities and Philosophy. She is a member of the Undergraduate Advisory Committee to the Department of English and a member of the Behrman Undergraduate Society of Fellows, a group of juniors and seniors who are committed to the study of humanistic inquiry and meet once a month during the academic year.

In summer 2016, she interned at the Montefiore-Einstein Center for Bioethics in New York through Princeton Internships in Civic Service.

Barry will begin her studies in Ireland in September 2019. After completing her master’s in philosophy and literature at UCD, she plans to pursue a Ph.D. in literature. Her long-term goal is to be a literary critic and nonfiction writer with a career in academia.

Barry said that when she received the call that she would be a Class of 2020 Mitchell Scholar, “I immediately felt so grateful to all of the family members, friends, professors and advisers who supported me during this application process and throughout my time at Princeton.”